But the extreme circulation anomalies also resulted in very wet episodes during some months in some regions. These wet events mask some of the dry episodes on the statewide-scale and seasonal-scale analyses. They also resulted in a year that was characterized by both wet and dry extremes, sometimes in different parts of the country during the same month, and at other times in the same part of the country during different months.

Unusual warmth characterized most of 2017. All but four months (May, September, October, and December) had about 20 percent or more of the CONUS experiencing very warm temperature anomalies (at the 90th percentile of the historical record or warmer), six had more than 30 percent very warm, and two had more than half of the country very warm — February (67.7 percent) and March (51.7 percent). Only May had less than ten percent very warm. And only one month (August) had more than one percent of the country experiencing very cold temperature anomalies (at the tenth percentile of the historical record or colder), and that was only 17.4 percent of the CONUS very cold. When averaged across the country, the cold and warm temperature anomalies resulted in a top ten warmest month for February (second warmest), March (ninth warmest), July (tenth warmest), and November (tied for eighth warmest).

On a national scale, broadly speaking, during 2017 drought waxed, then waned, then waxed again. The year began with drought lingering in parts of the West, Plains, Southeast, and Northeast, covering about 22.5 percent of the CONUS according to U.S. Drought Monitor (USDM) statistics. Abundant winter and spring precipitation reduced or eliminated drought in all of these areas so that, by late spring, drought remained in only a few parts of the Southwest, northern Plains, and Southeast. The minimum drought area was reached on May 23 when 4.5 percent of the CONUS was affected by moderate to exceptional drought, which is a record low in the 1999-2017 USDM record. But dry conditions, coupled with unusually hot temperatures, plagued many areas during the summer and autumn. As noted earlier, hot temperatures increase evapotranspiration which makes droughts worse. The northern Plains were especially hard hit, with Montana, North Dakota, and South Dakota becoming the epicenter of the summer drought. By the end of summer, drought and dryness were spreading into the Pacific Northwest and Midwest (mainly Iowa), but they were all but eliminated from the Southeast. During the autumn months, wet conditions helped shrink drought some in the northern Plains, but dryness returned to the southern half of the country with drought returning or expanding in the Southwest, southern Plains to Lower Mississippi Valley, and Southeast. By the end of December, drought continued in these regions, with drought and abnormal dryness expanding across the Great Plains, further into the Midwest, and up the coast into the Mid-Atlantic region and parts of the Northeast, covering 27.7 percent of the CONUS. 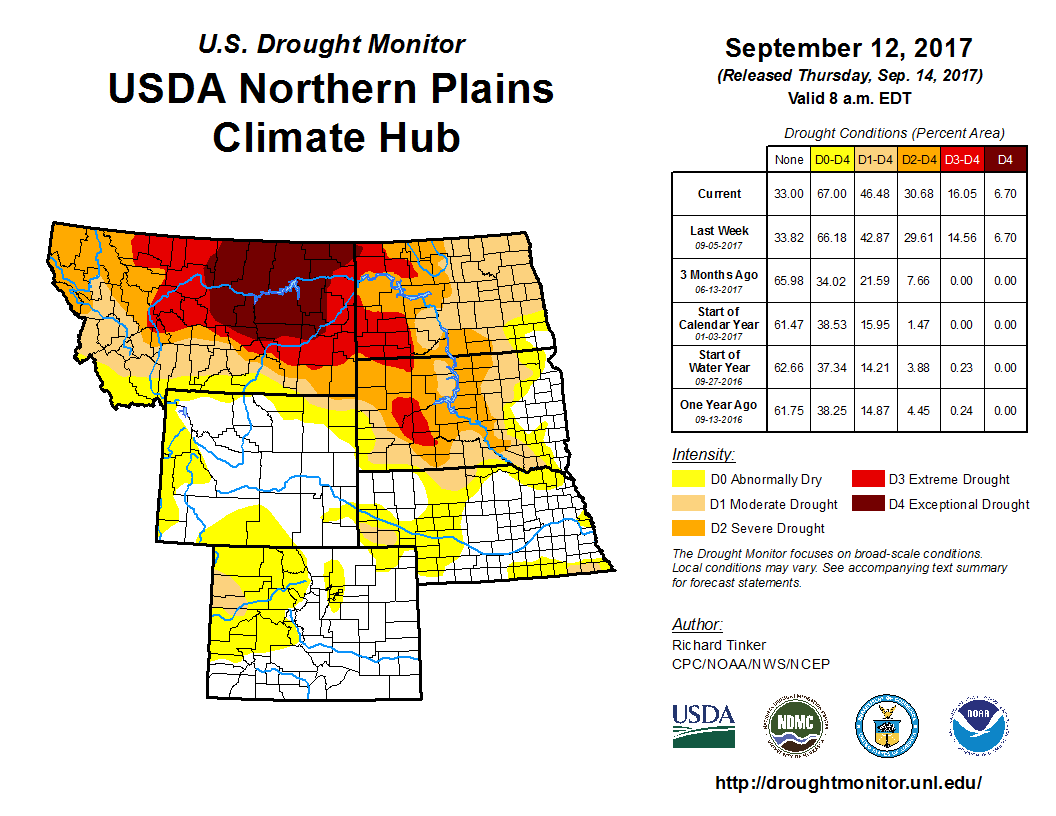 The unusual heat combined with the exceptional dryness resulted in a rapidly declining Palmer Hydrological Drought Index (PHDI), which integrates moisture supply and demand over time. The PHDI for northeast Montana reached extreme drought levels (a value of -4.90) by August 2017. While this severity level rivals the droughts of the 1930s, 1950s-60s, and 1980s, the duration of dryness in 2017 was much shorter than those other extreme droughts. The PHDI for adjacent southwest North Dakota (climate division 7) also rapidly declined in 2017 (reaching a value of -5.43 by July), which also rivaled the 1930s and 1980s droughts.

As summarized by the High Plains Regional Climate Center:

The year began with about a fourth (27.7 percent) of the southern Plains to Lower Mississippi Valley experiencing moderate to extreme drought. By April the drought area had dropped below 10 percent, reaching a minimum of 0.4 percent on August 29. But very dry conditions during the autumn and early winter rapidly expanded the drought area, reaching a peak of 47.6 percent of the region on December 19.


As summarized by the Southern Regional Climate Center:

As summarized by the Midwest Regional Climate Center:

As summarized by the Western Regional Climate Center:

More than a third (38.5 percent) of the Southeast was in drought when 2017 began. Dry conditions during late winter and early spring expanded the drought area to 44.6 percent by April 18, but rains during the late spring and early summer eliminated all drought areas by the beginning of July. A very dry November and December led to the rapid return of drought, with moderate drought expanding once again to a third (33.2 percent) of the region by January 2, 2018.

As summarized by the Southeast Regional Climate Center:

The Northeast began 2017 with 43.7 percent of the region in moderate to extreme drought. Beneficial precipitation over parts to all of the Northeast during late winter to mid-summer shrank the drought area to zero percent by May 9. Dryness returned during September, prompting an expansion of drought to 12.3 percent of the region by October 24. Late October precipitation brought the drought area back down to zero, but dryness returned in November and December, closing out the year with 5.3 percent of the Northeast in drought on January 2, 2018.

As summarized by the Northeast Regional Climate Center:

As noted by the Western Regional Climate Center, precipitation averaged to slightly below normal across the state of Hawaii in 2017. A dry start to the year resulted in drought conditions developing by July. By October, 65% of the state was experiencing moderate or worse drought conditions, mostly on Big Island. A wetter period reduced this to 21% by the end of the year. On Kauai, Lihue observed 23.55 in (598 mm) for the year, 64% of normal and the 7th driest year on record. 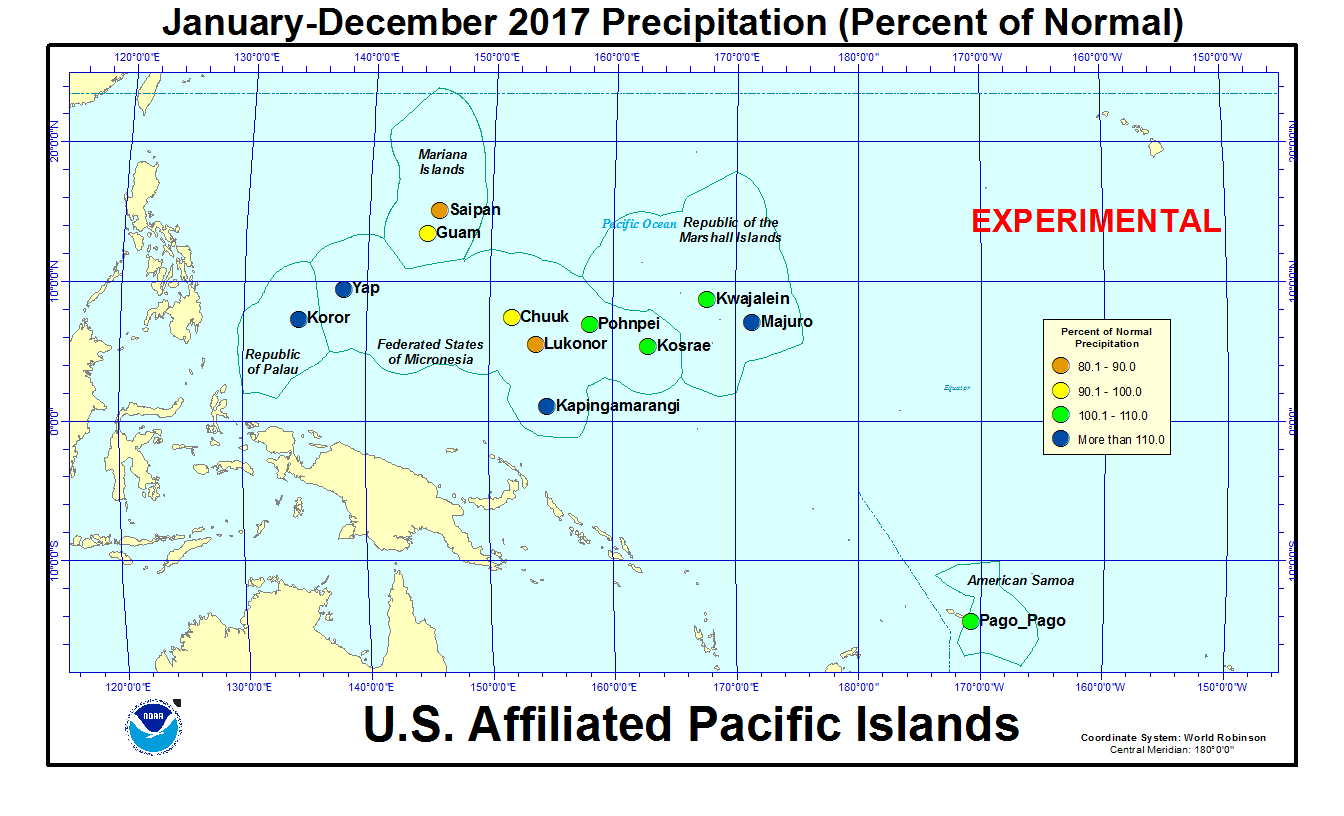 Map showing 2017 percent of normal precipitation for the USAPI.

As discussed by the Western Regional Climate Center, 2017 precipitation was generally 80-110% of normal across the USAPI. The northern Marshall Islands experienced very dry conditions to start the year; household rain tanks had gone dry by late April prompting the president of the Marshall Islands to declare a State of Emergency. Subsequent summer rainfall helped to alleviate these dry conditions.