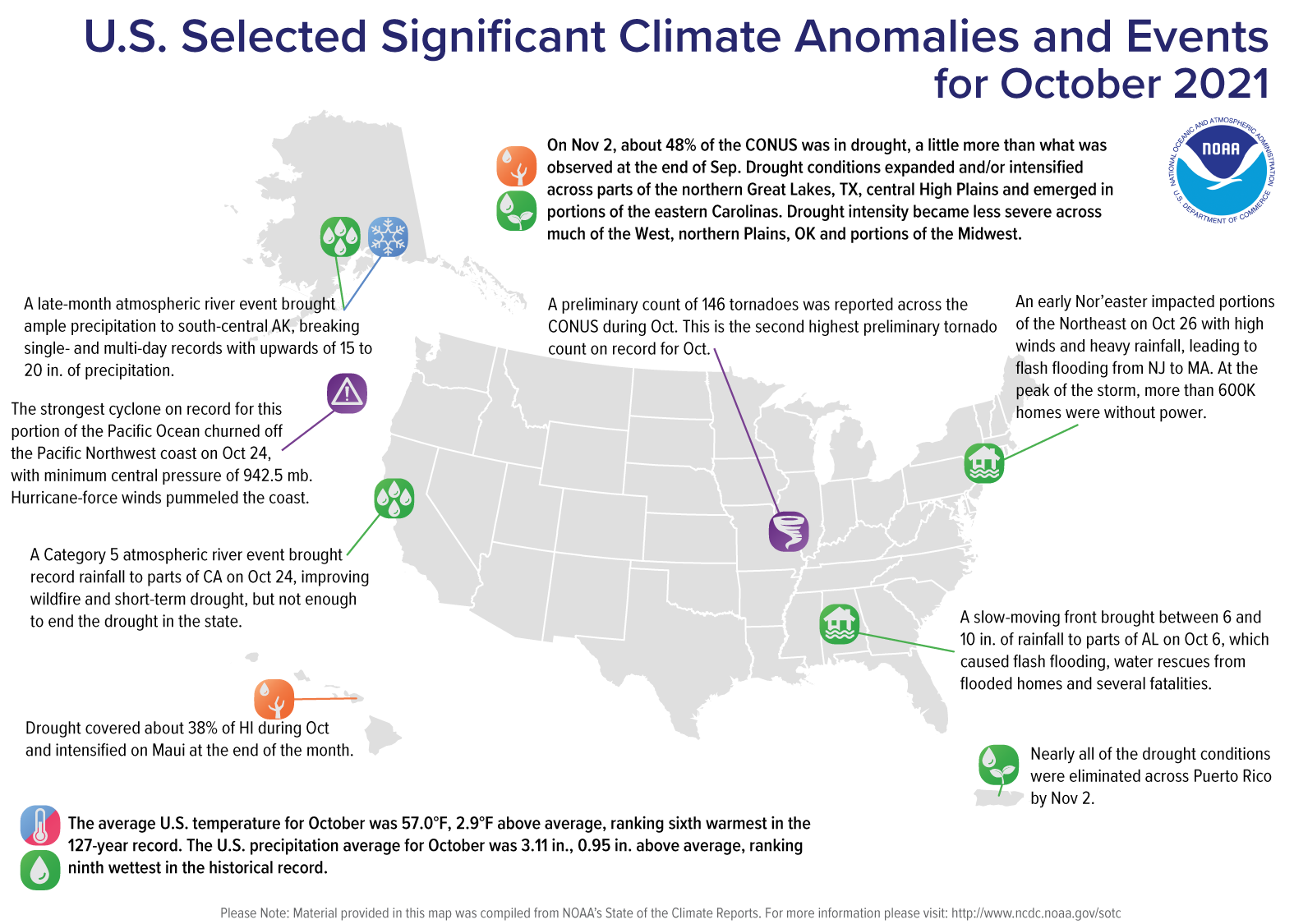 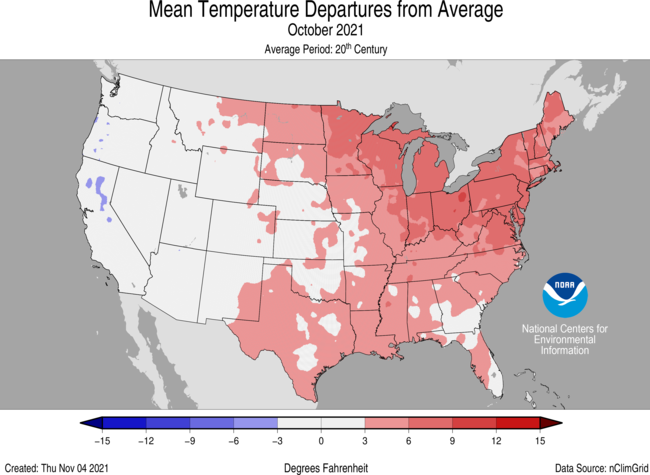 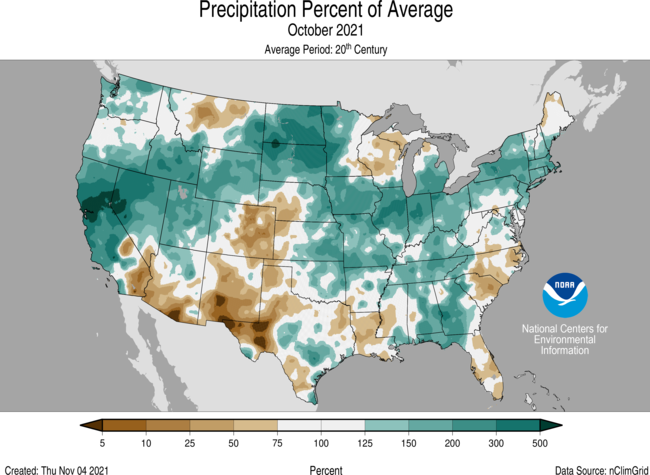 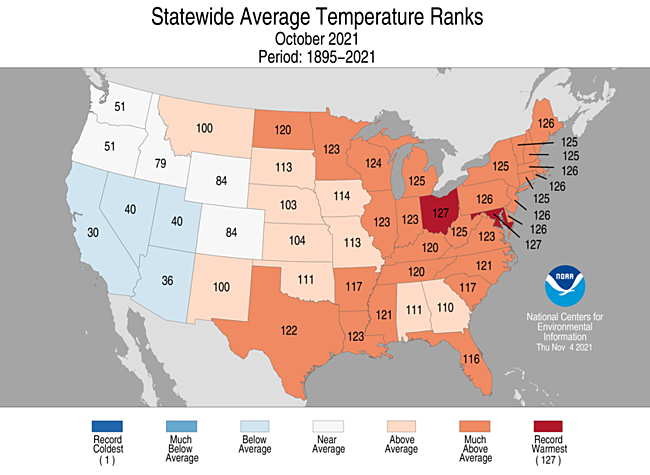 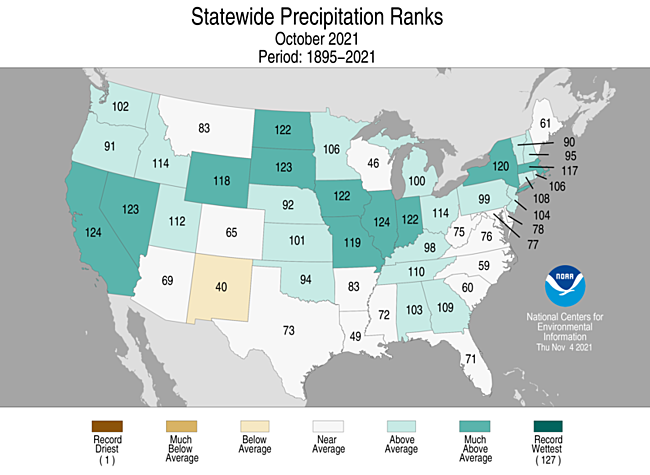 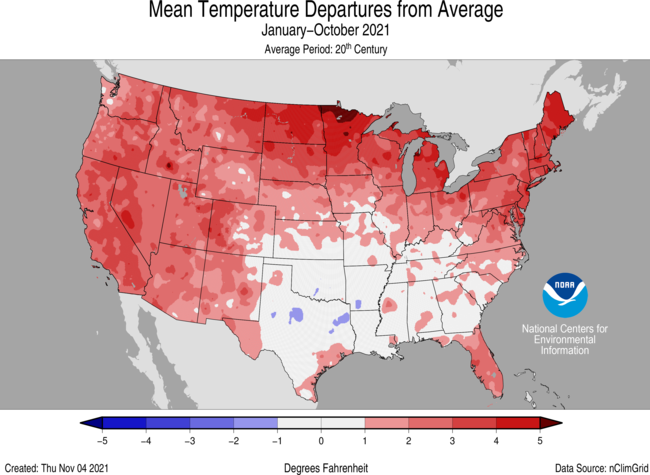 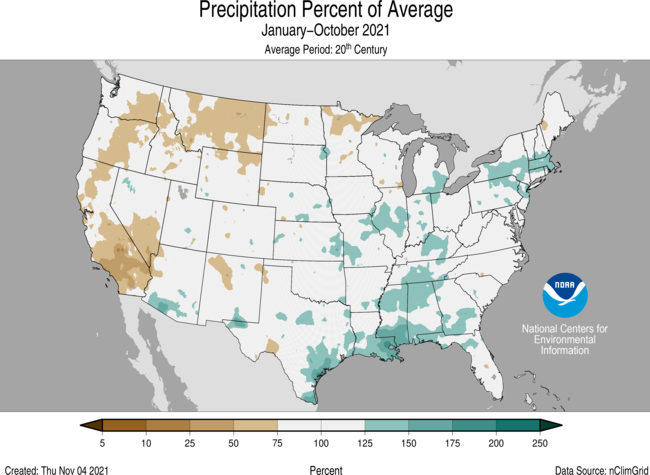 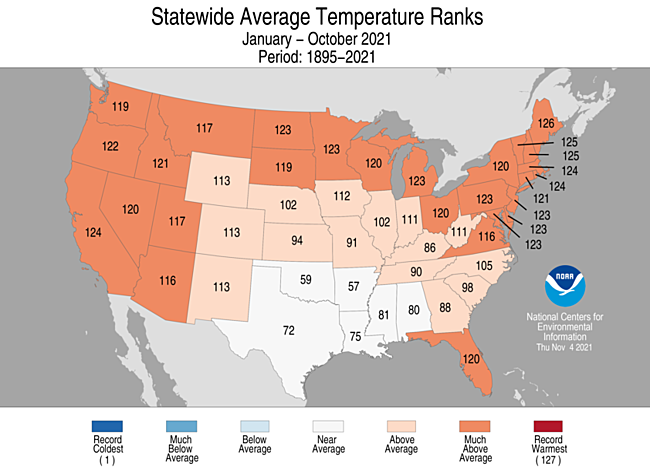 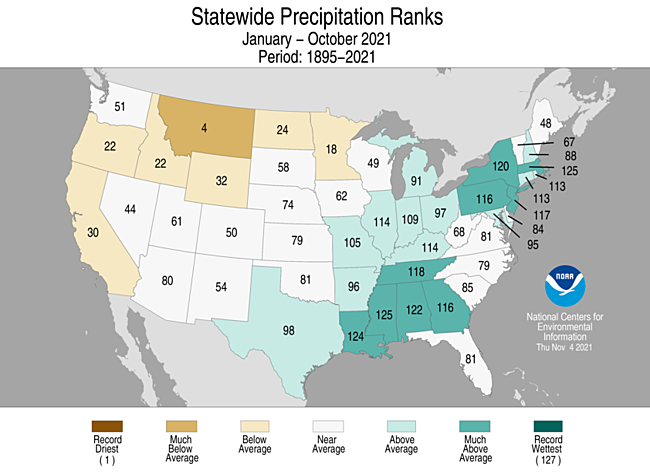 Snow made its first appearance for many portions of the region in October. Cooler fall temperatures and above-normal precipitation in Wyoming, The Dakotas, and the higher elevations in Colorado contributed to the appearance of the season’s first significant snowfall. Southeastern Wyoming had its first Winter Storm and High Wind event of the season. High winds of 40 to 50 mph (64 to 80 km/h) coupled with snowfall led to the first Blizzard warnings being issued this season for counties in southeastern Wyoming. Highway closures, due to the blizzard, resulted in major travel issues. Travel alerts did not appear on some phones, so motorists were not aware of the closures and were stranded in towns along the interstate. Some motorists had to sleep in their cars as limited hotels in small towns were full and they could not get to other areas with the road closures. While this storm created major travel headaches, it did bring much-needed relief to neighboring wildfires, as well as the hot temperatures from summer, while also helping to improve air quality in the region. The Colorado Rockies also received their first notable snowfall of the season. Multiple snowstorms impacted the region in October bringing over a foot of snow in different areas. Winter Storm Warnings were issued for the higher elevations and stretched north to south across the entire range in Colorado. After a storm that brought 14 inches (356 mm) of snow to the southwest part of the state, Wolf Creek ski area near Pagosa Springs became the first in Colorado to open for the season. This was quickly followed by multiple other resorts releasing their opening dates bringing an early start to the ski season. After a summer filled with extreme heat and drought, many areas welcomed the relief of colder temperatures and snow. While drought is still present in the High Plains, this above-normal precipitation and snow did help to provide minor improvement across Wyoming, The Dakotas, and areas in Colorado.

October was unusually warm across the Southern Region, with several severe weather outbreaks.

October 2021 was a very warm month throughout the Southern Region, ranking 5th warmest in 127 years of records with an average temperature of 68.8 °F (20.4 °C). Every state was among the top ten historically except for Oklahoma, which was only 13th warmest all-time at 64.8 °F (18.2 °C). The highest-ranking state was Louisiana, 4th warmest all-time with an average October temperature of 72.4 °F (22.4 °C). One record high monthly temperature was set at a long-term station: 104 °F (40.0 °C) at Cotulla, southern Texas, on October 10, breaking a record set precisely one year earlier. The highest temperature of the month was at Rio Grande Village, southwestern Texas, on October 11, at 106 °F (41.1 °C). The lowest temperatures were observed in Tennessee (Mt. Leconte, October 18) and Texas (Muleshoe National Wildlife Refuge, Muleshoe 19 S, both October 16, and Cope Ranch, October 30), all at 25 °F (-3.9 °C). Arkansas, Louisiana, and Mississippi all avoided temperatures below 32 °F (0 °C) in October.

The monthly rainfall across the Southern Region tended to be on the wet side. Average precipitation in Tennessee was greatest, at 4.92 inches (125 mm), ranking 22nd wettest all-time. Oklahoma ranked 33rd at 3.93 inches (33rd wettest) and Arkansas ranked 45th at 4.29 inches (109 mm). The only state below the historical median was Louisiana, 49th driest at 2.50 inches (64 mm). The six-state region as a whole averaged 3.07 inches (78 mm), ranking 51st. The largest monthly rainfall total was 15.45 inches (392 mm) at Seminole, Oklahoma. Meanwhile, about a dozen stations in western Texas failed to record measurable precipitation.

From September 28 to November 2, the portion of the six-state Southern Region in drought expanded from nearly 14% to nearly 23%. The largest drought expansion was in Texas, which went from 7% in drought to 33% in drought. The neighboring state of Oklahoma saw drought extent shrink dramatically, from 73% to 37%. There were modest expansions of drought in Arkansas and Louisiana as well. The largest worsening of conditions were in the four-state region surrounding Texarkana and in west-central and southwestern Texas, with primary concerns associated with wildfire risk and establishment of cool-season forage.

There were several individual rainfall events that produced substantial one-day totals. Among the significant one-day precipitation amounts were 10.72 inches (272 mm) near Brownsville, southern Texas, on October 1-2; 8.15 inches (207 mm) in North Little Rock, Arkansas, on October 2-3; 8.10 inches (206 mm) at Fall Creek Falls State Park, Tennessee, on October 6-7; and 9.90 inches (251 mm) in Gonzales, southern Texas, on October 13-14. The heavy rainfall during October 1-3 was partly associated with the remnants of Hurricane Pamela, an eastern Pacific storm that made landfall earlier on the Mexican coast. Heavy rain in the San Antonio area associated with the same system caused two fatalities as a mother and her child were swept away in their vehicle.

October saw considerable severe weather, with the traditional Tornado Alley region of northern Texas and Oklahoma being particularly active. The most significant severe weather outbreaks were October 10, 12, 26, and 27. The October 27 outbreak produced the strongest tornadoes, with two EF2 tornadoes in southeast Texas and one in Lake Charles, Louisiana that caused two injuries. An EF1 tornado in Pascagoula, Mississippi, caused one fatality as the driver of an SUV lost control and was ejected from his vehicle. There were 124 severe wind reports, including one measurement of 96 mph winds in the Big Bend area of Texas on October 26. The 33 hail reports included one report of 3” (8 cm) diameter hail near Norman, Oklahoma on October 10. Texas and Oklahoma received the bulk of the severe weather, but there were at least two tornadoes in each of the other four states in the region.