In early April, the Caribbean countries of Guyana, Grenada, St. Lucia, and Barbados were in the midst of a record drought. The drought began in October 2009, which is typically the region's wettest month of the year. Each of these countries recorded their lowest October through March rainfall totals since records began, according to the Caribbean Institute for Meteorology and Hydrology. In Barbados, as of April 8th, there were more than 1,000 brush fires for the year-to-date, compared with 361 during the same period in 2009 (Source: AP).

Cuba was also impacted by the prolonged drought affecting the Caribbean. By April, 68 percent of the national territory was affected by the dry conditions, with 12 percent experiencing extreme drought, acording to the Meteorology Institute's Climate Centre (Source: IPS News). Local authorities began urging residients to conserve water as reservoir levels shrank. To date, water supplies were lacking for more than 500,000 people. According to the Cuban Civil Defense Agency, 2009 was one of the four driest years in the country since 1900 (Source: Latin American Herald Tribune). The rainy season begins in May.

In mid-April, moderate to severe drought conditions were present over parts of southern, southwestern, and central China (Source: Beijing Climate Center). In the Guangxi Zhuang autonomous region—an area that has experienced ongoing drought conditions for several months—pine caterpillars were destroying the local pine forests. According to an official, over 2,300 hectares (almost 5,700 acres) were seriously damaged by these pests this year-to-date, nearly eight times the area compared with the previous year. The official noted that the drought weakened the trees' ability to resist the caterpillars and that the heat and dryness created ideal conditions for more rapid pest reproduction (Source: China.org.cn). Beneficial rain events from the end of March to the end of April helped ease the drought in most of these areas. At the beginning of May, China ended its "grade II drought emergency response" (Source: Xinhua).

Less than a week after record flooding occurred in the notheastern U.S., a major heat wave hit the region. On April 7th temperatures reached 92°F (33°C) in Providence, Rhode Island and 93°F (34°C) in Hartford, Connecticut, setting daily records in both cities. Boston's Logan International Airport reported a temperature of 90°F (32°C)—not only a record but also the earliest date a 90°F reading has ever been recorded for that location.

On April 18th, Delhi, India recorded its highest April temperature in nearly 60 years. The maximum temperature reached 110.7°F (43.7°C), which is 13.5°F (7.5°C) above normal, according to the India Meteorological Department (IMD). The warm weather in April follows on the heels of the second warmest March for the city since records began in 1901—March 1953 was the warmest on record (Sources: BBC News; The Times of India).

On April 1st, heavy rains triggered landslides that killed at least 29 people and left 25 others unaccounted for in the towns of Porvenir and Cancejos in northeastern Peru (Source: AP). The landslides occurred two months after floods washed out the rail link from Cuzco to the famed Machu Picchu Inca citadel. 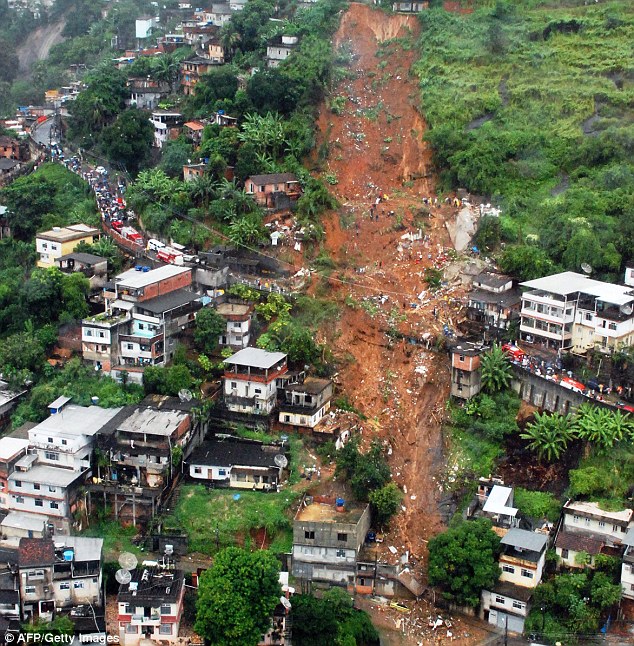 Eleven inches (280 mm) of rain fell in a 24-hour period over April 4th–5th in Rio de Janeiro, Brazil. According to Brazil's national weather service, INMET, this was this the heaviest rainfall event recorded in 48 years. At least 246 people were killed and thousands lost their homes as subsequent mudslides destroyed everything in their paths. Flooding and thick mud led to major road closures in the city as people were urged by local authorities to remain indoors. While Rio de Janeiro has experienced a "particularly rainy summer" this year, heavy rain is more common in January than April (Source: BBC News).

A volcanic eruption in Iceland on April 14th spewed smoke and steam several kilometers into the air for several days, creating a giant ash plume. The ash cloud brought air traffic to a halt across most of Europe and stranded hundreds of thousands of passengers. The eruption also partially melted the Eyjafjallajokull glacier, leading to flash floods that covered local roads and threatened to damage bridges and other structures. About 800 people were evacuated from their homes in Hvolsvollur, a small rural town situated beneath the glacier. No injuries were reported, but some farmland was devastated (Source: The Vancouver Sun). 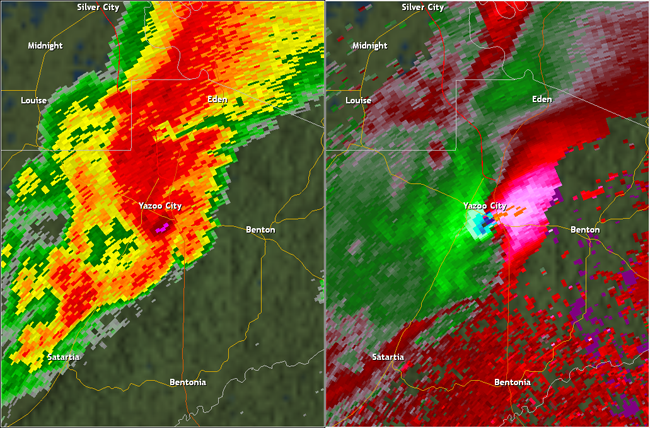 After a fairly quiet start to the 2010 tornado season in the U.S., more then two dozen tornadoes were reported from southestern Colorado and northwestern Kansas to the Texas panhandle on April 22nd. The storm system that spawned the twisters moved eastward, with severe weather and more tornadoes reported from Missouri to Texas and into Mississippi on the 23rd. No injuries were reported with any of these outbreaks; however, tornado reports continued into the 24th in Arkansas, Missouri, Tennessee, Kentucky, and Alabama. The largest—a powerful and destructive EF-4 tornado with winds reaching 170 mph (274 km/hr)—originated near Tallulah, Louisiana and tore east across Mississippi, killing 10 people, injuring 146, and damaging or destroying hundreds of homes. The hardest hit areas were in Yazoo, Choctaw, and Holmes counties in Mississippi. The tornado was on the ground for three hours and had a maximum width of 1.75 miles (2.82 km) and a path length of 149.25 miles (240.19 km), making it one of the longest tornado tracks on record (Source: NWS). A total of 136 tornadoes were reported over the three-day period. For more information, please see NCDC's April Tornado Report. 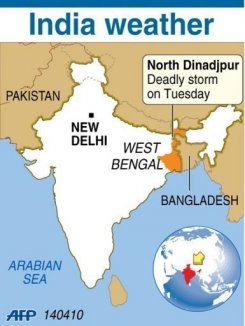 
On April 13th, a nor'wester—a seasonal storm that develops over the Bay of Bengal during the hot months of the year—barreled across eastern India and parts of Bangladesh. A prolonged heatwave with temperatures exceeding 104°F (40°C) and high humidity led to the sudden formation of the cyclone. Wind speeds up to 75 mph (120 km/hr) were recorded. At least 137 people were killed and nearly one million were left homeless. While nor'westers are common this time of year in the region during the pre-monsoon season, they are typically not this severe (Source: AFP). 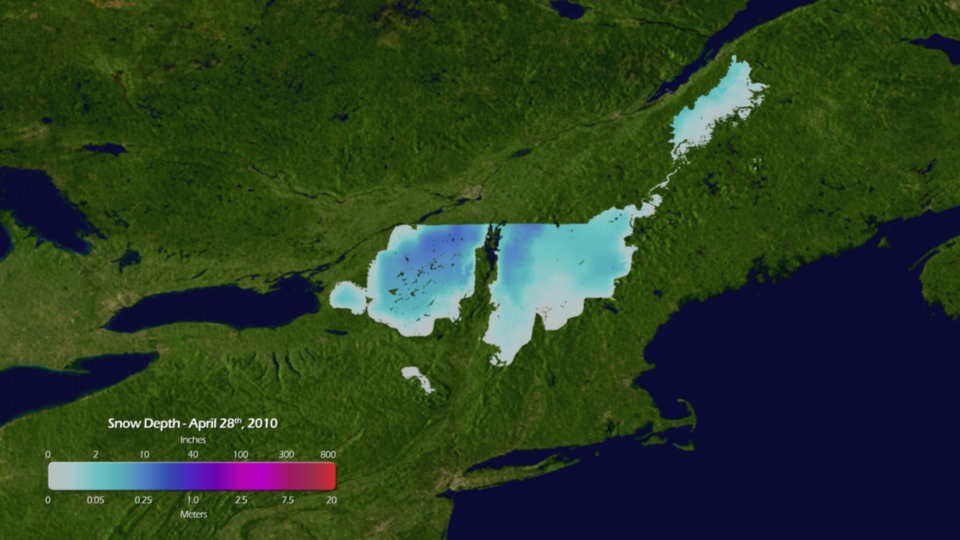