According to the U.S. Drought Monitor (USDM), nearly eight percent of the U.S. (including Alaska, Hawaii, and Puerto Rico) was experiencing moderate to severe drought as of March 30th. Drought afflicted 57 percent of Hawaii's land cover, with part of the northern portion of the Big Island moving into exceptional drought at the beginning of the month for the first time since the inception of the USDM in 1999; exceptional drought is the most serious category as defined by the USDM. According to NOAA's Climate Prediction Center, the El Niño phenomenon—anomalously warm ocean waters in the equatorial Pacific—is responsible for the continuing dry conditions over Hawaii.


At the end of March, moderate to severe drought persisted in the provinces of Yunnan, Guizhou, southern Sichuan, and northwestern Guangxi in South China. Since fall 2009, drought conditions have affected more than 60 million people and ruined billions of dollars worth of crops in southwest China (Source: BBC News). According to a director at the Yunnan Land Resources Bureau, this is the worst drought in a century for parts of this province.

On March 1st, after days of heavy rains, landslides buried three mountainous villages in the remote eastern Ugandan region of Bududa near the Kenyan border. At least 85 people were killed—including about 50 students seeking shelter in a local hospital—while more than 300 others were missing (Source: ReliefWeb). In the village of Nametsi, mud and debris rose more than 16 feet (4.9 meters) in height, completely covering most structures.

From a slow moving monsoonal system, for the 24-hour period ending at 9:00 AM local time on March 1st, the outback towns of Bedourie and Birdsville in far western Queensland, Australia, recorded 7.4 and 6.6 inches (188 and 166 mm) of rain, respectively. Not only were these daily rainfall amounts the highest recorded for these stations, they also were nearly equal to the average annual rainfall in those areas. As of March 4th, Birdsville received 14.8 inches (375 mm) of rain, more than double its annual average for the entire year (Source: Bureau of Meteorology).

Heavy rains combined with melting snow brought severe flooding to southern Kazakhstan on March 12th. At least 40 people were killed and thousands of others were affected. Although springtime flooding is not unusual in the region, this event was exacerbated by intense snowfalls through the winter followed by uncharacteristically rapid rising temperatures (Source: AP).

Following on the heels of its driest summer on record (December, January, and February in the Southern Hemisphere) with just 0.008 inches (0.2 mm) of measured rainfall, a severe storm struck Perth, Australia on March 22nd, bringing heavy rains, flooding, wind gusts over 75 mph (120 km/hr), and golf ball-sized hail. According to reports, an average month's worth of rainfall (0.6 inches or 15.6 mm) fell in just seven minutes at Perth Airport (Source: AFP). Nearly 160,000 people lost power and damages were initially estimated to be hundreds of millions of dollars. 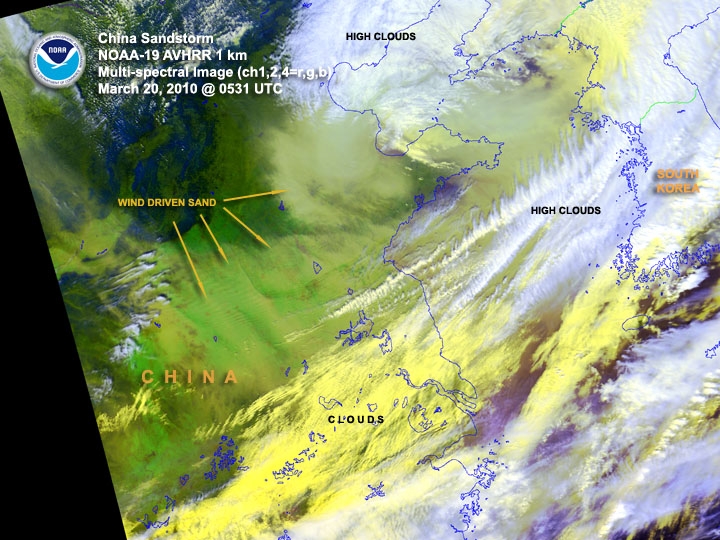 The strongest sandstorm of the year-to-date brought tons of sand to Beijing, China on March 20th, turning the sky orange and leading officials to rate the air quality as level 5 "hazardous"—the highest ranking possible and a level rarely isssued (Source: AP). Record pollution levels were recorded in Hong Kong, more than 1,200 miles (2,000 km) to the south; under certain conditions the sand can be transported as far away as the western U.S. Overgrazing, deforestation, urban sprawl, and drought have all contributed to an increase in the number of sandstorms in this region. According to the Chinese Academy of Sciences, the number of sandstorms has increased sixfold in the past half century to about two dozen per year (Source: AP). Approximately 250,000 people were affected by this storm.

On March 24th, the Harmattan—a yearly trade wind that carries dust from the Sahara Desert across West Africa—unexpectedly blew into Nigeria, coating the country with a fine layer of dust and blotting out the sun. The yellow haze from the storm reduced visibility to near zero and caused flight cancellations. According to the Nigerian Meteorological Agency, the Harmattan typically ends by February. Growing desertification due to rising temperatures is allowing the Sahara to move closer toward Nigeria. The additional dust "adds fuel" to the Harmattan winds, said a climatology professor at Osun State University. Changing patterns in the trade winds affect the timing of arrival for the rainy and dry seasons—relied upon by farmers for planting crops each year (Source: AP).

A tornado touched down during a severe thunderstorm in the Bahamas on March 29th, killing three people and injuring at least four others. The storm blew windows out of residences and hotels on Grand Bahama, uprooted trees, and tore roofs off of several buildings. Tornadoes are relatively uncommon in this region, forming approximately once every three years, according to a weather forecaster from the Bahamas Meteorology Department (Source: AP).

Following one of Britain's coldest winters in several decades, heavy rain, snow, and gale-force winds pounded Scotland and Northern Ireland on March 31st, killing one person and leaving tens of thousands without power. Snow drifts up to 20 inches (50 cm) were reported (Source: AP). 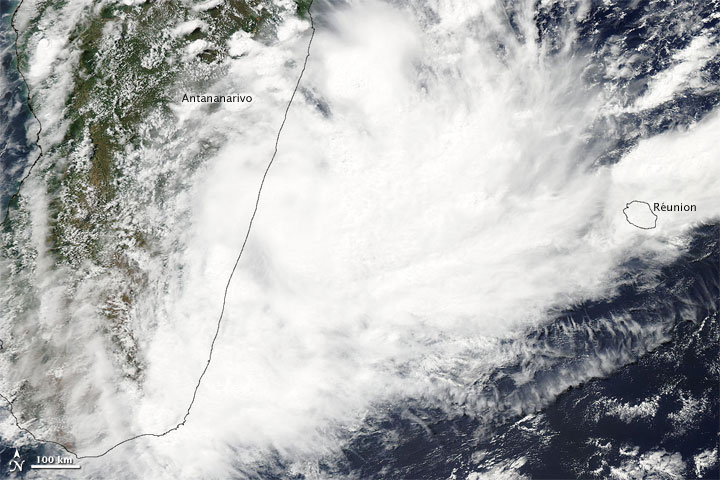 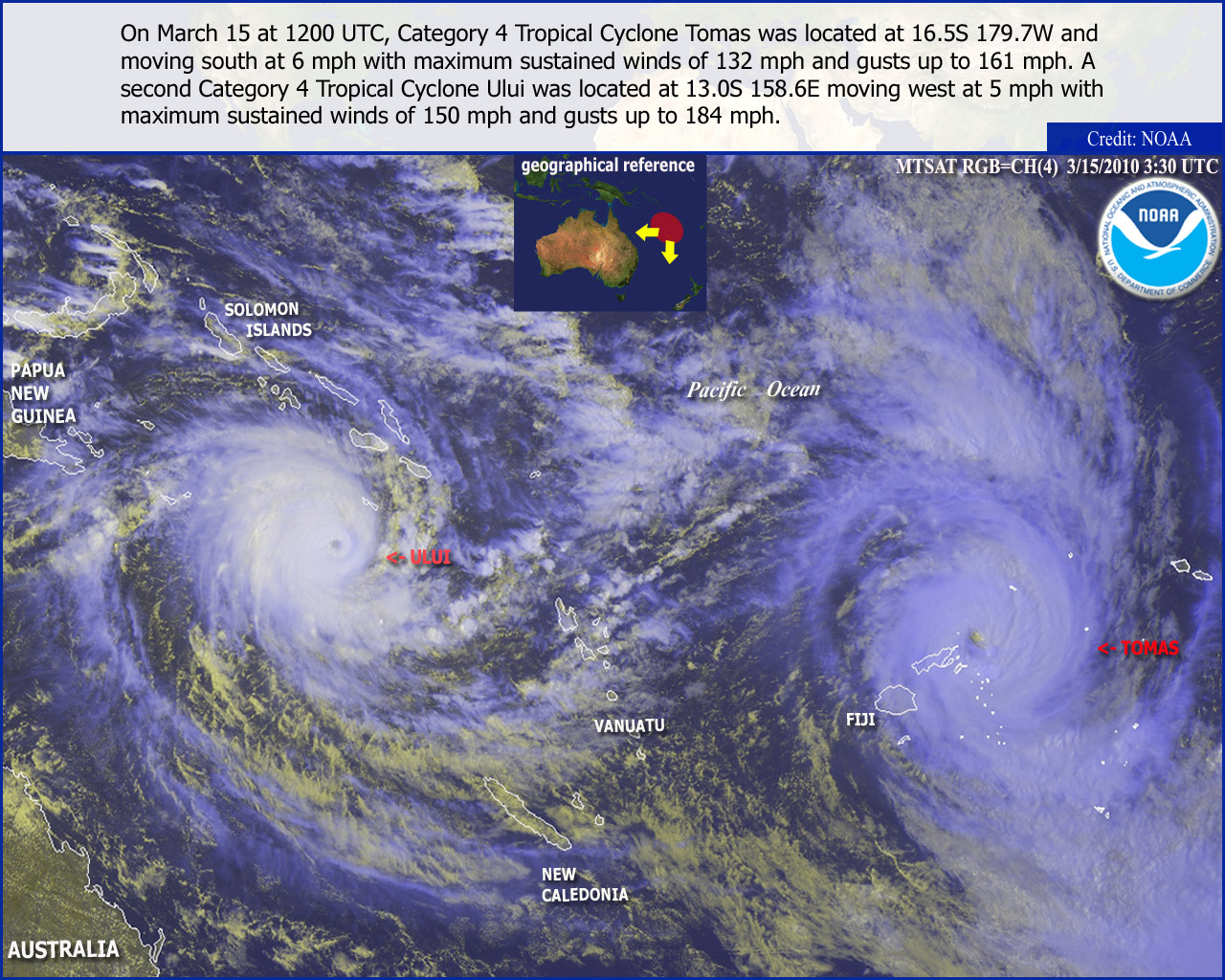 Tropical Cyclone Ului developed on March 9th in the South Pacific. During a 24-hour period over March 13th-14th, Ului intensified from a tropical storm to Category 5 status, tying Hurricane Wilma for the fastest intensification of a system and making it the first Category 5 storm of the season (Source: Earth Snapshot). During this timeframe, maximum sustained winds increased from 65 mph (100 km/hr) to 160 mph (260 km/hr) while pressure at the center of the storm decreased from 982 mb to 918 mb. The storm rolled over the Solomon Islands as a Category 5, causing severe flooding and massive damage; no casualties were reported. The storm then weakened and made landfall on March 20th as a tropical storm in Queensland, Australia near Arlie Beach. As much as 18 inches (450 mm) fell in parts of the Mackay-Whitsunday region.

Located to the east of Ului, Tropical Cyclone Tomas, a Category 4 storm at its peak, battered the South Pacific island nation of Fiji March 13th-16th. Sustained winds of 132 mph (212 km/hr), with gusts up to 161 mph (259 km/hr), tore through the northern Lau and Lomaiviti groups and the northern portion of Vanua Lau—the second largest island. A storm surge of 23 feet (7 m) was reported as more than 14 inches (350 mm) of rain was dumped over some areas (Source: IOL). At least one death was blamed on the storm and a state of emergency was declared for the country's northern and eastern regions on March 16th.

Following several winter storms in February, a nor'easter wreaked havoc along the Atlantic seaboard in mid March. On March 13th, torrential rains and strong winds killed at least 11 people and left approximately 500,000 others without electricity in Pennsylvania, New Jersey, New York, and Connecticut. New Jersey's largest utility company stated that the storm was the worst in its history, with 420,000 power outages to customers. This major storm pounded the region for three days. Rainfall amounts of six to ten inches (150-240 mm) were reported in Massachussetts, Maine, New Hampshire, and New Jersey, while wind gusts topped more than 70 mph (113 km/hr) in many locations. States of emergencies were declared in Massachussetts, Rhode Island, and Connecticut.