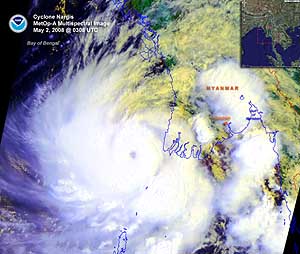 
Tropical cyclone Nargis, which made landfall along the Burmese coast on May 2, was the most devastating cyclone to strike Asia since 1991 (Reuters). Additional information can be found below.

Across the United States, extreme drought conditions persisted across parts of the southern High Plains, western North Dakota, northeastern Alabama, and the southern Appalachians. As of May 27, 26% of the western U.S., 27% of the South, 22% of the High Plains, 40% of the Southeast, and 22% of the contiguous U.S. were in moderate to extreme drought, according to the U.S. Drought Monitor. For a complete drought analysis across the United States, please see the U.S. drought page.

According to reports, more than 90 wildfires charred nearly 16,190 hectares (40,000 acres) of land across Florida on May 18 (USA Today). The biggest blaze was located in Brevard County, where 40 homes were destroyed, more than 100 buildings were damaged, and 1,416 hectares (3,500 acres) of land were burned. According to reports, damages are estimated to be nearly $9.6 million (Associated Press). For more information on May's wildfires, please visit the May 2008 Wildfire page.

Heavy downpours associated with the outer rain bands of Typhoon Rammasun (a tropical storm as it passed east of the Philippines) caused widespread flooding across the southern, central, and western parts of the Philippines. Heavy rain triggered mudslides that were responsible for two fatalities and forced thousands to evacuate the area (BBC News).

Heavy rain fell during May 21-26 across south-central Chile, triggering flash floods and landslides that killed five people, displaced nearly 15,000 people, and forced the closure of the El Teniente copper mine, the world's largest underground copper mine. The heavy rains caused rivers to flow over their banks, flooding homes and agricultural land (BBC News/Reuters).

In northwestern Pakistan, heavy rain on May 24-25 prompted widespread floods. The severe weather was responsible for the deaths of 10 people (AFP).

In southern China, heavy rains on May 27-28 produced flooding that caused 28 fatalities and affected more than 500,000 people (Associated Press/BBC News).

Dangerous floods caused by torrential rains affected more than 100,000 people, damaged thousands of homes, and were responsible for the fatalities of nine people in Colombia on May 27-28 (BBC News). 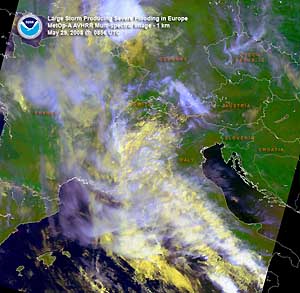 Across parts of Europe, storms produced torrential rainfall that prompted dangerous flash floods and mudslides on May 29. The worst hit countries were Germany, France, Italy, and Belgium (BBC News). In northern Italy, the heavy rain triggered a mudslide that claimed the lives of three people, while in eastern France and Belgium, the downpours triggered a mudslide that blocked roads and railways (BBC News). According to reports, Italy declared a state of emergency (AFP). 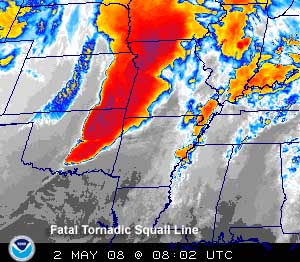 Satellite animation of fatal tornadic
squall line on 2 May 2008

Numerous bouts of severe weather affected the contiguous U.S. since the start of the year, and May was no exception. Severe storms ripped through the central U.S. on May 1-2, spawning over 90 tornadoes, hail, and hurricane-force winds. Arkansas, the worst hit, was affected by eleven tornadoes that caused havoc across the state. The tornadoes damaged or destroyed nearly 400 homes and left about 20 counties with electrical and telephone disruptions. The severe weather caused 7 fatalities (AFP/Associated Press).

Another round of severe storms pounded the central and southeastern U.S. on May 10, producing more than 80 reported tornadoes, strong winds, and hail. The furious winds damaged hundreds of homes and brought down trees and power lines, leaving thousands of residents without electricity. The worst hit states were Missouri, Oklahoma, and Georgia. The storms claimed the lives of 23 people — 14 in Missouri, 7 in Oklahoma, and 2 in Georgia. The event was described by the U.S. President George W. Bush as a sad day and emergency federal aid has been promised to the affected states (AFP).

Satellite image of Mid-Atlantic storm
on 12 May 2008

A storm system lashed the Mid-Atlantic states on May 12, prompting hundreds of evacuations, flooding roads, and leaving tens of thousands of residents without power. According to reports, the hurricane-strength winds contributed to a deadly fire in Newark, NJ on the morning of the 12th, which killed one person, damaged three buildings, and left 35 people homeless (Associated Press).

A severe storm affected northern Bangladesh on May 12. A ferry was caught in the storm and sank in the Ghorautra River. According to reports, there were at least 150 people aboard the ferry. More than 60 people were rescued or swam to safety, 44 died, and the remaining were missing (Associated Press). 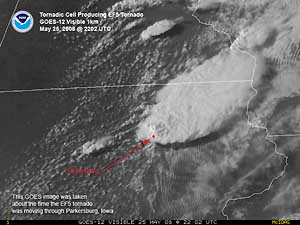 Severe storms swept through the central U.S. during May 22-25, producing destructive tornadoes that damaged buildings and claimed the lives of several people (BBC News). On May 22-23, Kansas was pounded by at least 15 tornadoes. The strongest tornado occurred near Quinter, KS and was classified as an EF-4 tornado, the first EF-4 tornado in the Tri State area since 15 June 1990 (NWS). Two fatalities were reported (Associated Press). On May 25, Iowa was slashed by severe storms and numerous tornadoes including a deadly EF-5 tornado (the highest on the Enhanced Fujita Tornado Scale) in Parkersburg, IA. The twister claimed the lives of seven people (several of those who died were in their basements), damaged over 400 homes and destroyed more than 200 homes and 21 businesses. According to reports, this was the strongest tornado to hit the state since 13 June 1976 (Associated Press). The last EF-5 tornado occurred in Greensburg, KS on 4 May 2007. According to reports, the number of tornado-related fatalities thus far in 2008 has made this year the deadliest January-May since 1998 and the eighth deadliest since records began in 1953. For more information on tornadoes this season, please see the NCDC 2008 Tornado Season page.

Tropical cyclone Nargis, the most devastating cyclone to strike Asia since 1991 (Reuters), developed in the Bay of Bengal on April 27. Prior to making landfall in Burma (Myanmar) on May 2, the cyclone intensified to a very severe cyclonic storm (equivalent to a category 4 in the Saffir-Simpson scale) with peak winds near 213 km/hr (132 mph or 115 knots). Nargis, the first tropical cyclone to strike Burma (Myanmar) since Cyclone Mala in 2006 and the first cyclone to develop in the Bay of Bengal since Cyclone Sidr (BBC News), swept through the Irrawaddy delta region and Yangon, the country's largest city. The storm brought heavy rain, strong winds, and a 3.7 meter (12 foot) storm surge, resulting in the worst disaster ever in the country (Associated Press). The cyclone destroyed thousands of homes and left thousands without power (Associated Press). According to early reports, the cyclone left nearly 78,000 people dead and almost 56,000 missing (Reuters), but it has also been reported that the death toll may eventually exceed 100,000 (CNN).

Typhoon Rammasun developed as a depression in the western Pacific Ocean, east of the Philippine Islands, on May 7 and reached tropical storm strength the next day. The storm's outer rain bands caused widespread floods across the Philippine Islands, prompting deadly mudslides. On May 9, Rammasun attained typhoon status and reached its peak intensity on the 10th with maximum sustained winds near 250 km/hr (155 mph or 135 knots). Rammasun never made landfall.

Typhoon Halong developed as a depression on May 15 in the western Pacific Ocean, west of the Philippine Islands. Halong reached typhoon intensity on May 17 with maximum sustained winds near 130 km/hr (81 mph or 70 knots). On May 18, the storm made landfall in the northern Philippines, lashing the islands with strong winds, storm surges, and heavy rain. Halong triggered floods and landslides that affected over one million people. There were 32 fatalities reported (AFP). 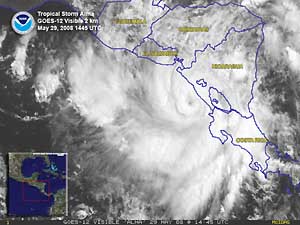 Tropical storm Alma was the first eastern Pacific storm of the 2008 season and the first tropical storm to strike Central America's Pacific coast since 1887 (The Tico Times). The storm developed as a tropical depression in the eastern Pacific Ocean, southwest of Central America, on May 29. Alma quickly intensified that same day to a tropical storm. On May 30, the storm made landfall in Nicaragua with maximum sustained winds near 105 km/hr (65 mph or 56 knots). The strong winds brought down trees and power lines, which disrupted of electricity and telephone service to over 150,000 people. Alma also lashed the country with heavy rain, prompting flash floods and mudslides (BBC News). Three fatalities were associated with the severe weather triggered by the tropical storm. Neighboring Costa Rica was also affected by the storm. According to reports, the storm flooded 120 homes and left nearly 42,000 homes in the Nicoya Peninsula without electricity (The Tico Times). 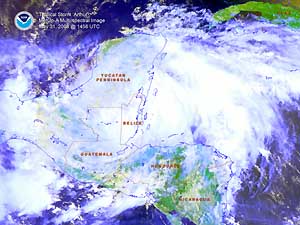 Tropical storm Arthur, the first Atlantic storm of the 2008 season, formed on May 31 in the Caribbean Sea, near the coast of Belize. The storm took many by surprise because it rapidly intensified to a tropical storm and made landfall in Belize that same day. Arthur brought torrential rain to Belize, prompting flash floods that claimed five lives (Associated Press). 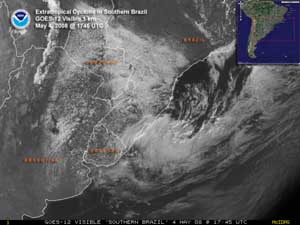 A powerful storm system slammed into Santa Catarina, southern Brazil, on May 4, leaving more than 1,600 people homeless, blocking major roads, and forcing 8 out of the 33 municipalities affected by the cyclone to declare a state of emergency. Neighboring Rio Grande do Sul was also affected by the cyclone, with three fatalities attributed to the cyclone and 25,000 people forced to evacuate the area (Xinhua).

In the United States, a heavy spring snowstorm on May 1 dumped up to 12.7 cm (5 inches) of snow in Douglas and Boulder County, Colorado, triggering several accidents that led to the closure of major roads. One fatality was reported (BBC News).

NOAA National Centers for Environmental Information, State of the Climate: Global Hazards for May 2008, published online June 2008, retrieved on April 17, 2021 from https://www.ncdc.noaa.gov/sotc/hazards/200805.