Previously, NCEI used a 2.5° longitude by 3.5° latitude gridded analysis of monthly temperatures from the 1,218 stations in the US Historical Climatology Network (USHCN v2.5) for its CONUS temperature. The new dataset interpolates to a much finer-mesh grid (about 5km by 5km) and incorporates values from several thousand more stations available in GHCN-Daily. In addition, monthly temperatures from stations in adjacent parts of Canada and Mexico aid in the interpolation of U.S. anomalies near the borders.

The switch to nClimDiv has little effect on the average national temperature trend or on relative rankings for individual years, because the new dataset uses the same set of algorithms and corrections applied in the production of the USHCN v2.5 dataset. However, although both the USHCN v2.5 and nClimDiv yield comparable trends, the finer resolution dataset more explicitly accounts for variations in topography (e.g., mountainous areas). Therefore, the baseline temperature, to which the national temperature anomaly is applied, is cooler for nClimDiv than for USHCN v2.5. This new baseline affects anomalies for all years equally, and thus does not alter our understanding of trends. 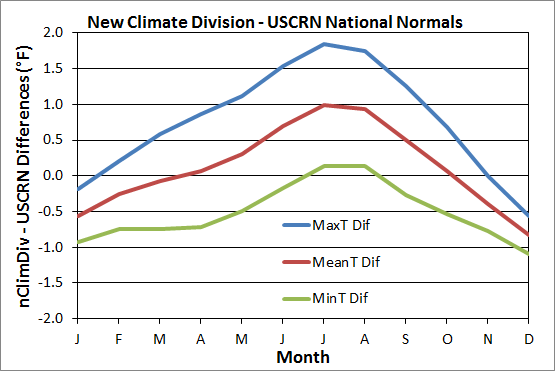 Figure 1: Comparison of national nClimDiv normals and national USCRN estimated normals for each month of the year for maximum, mean and minimum temperatures.

So as not to compare apples and oranges, the departures of nClimDiv and the U.S. Climate Reference Network (USCRN) values from normal values for each network are compared rather than the absolute values. The 30 years from 1981 through 2010 provide the basis for the normal period for each month and network. Data exist for nClimDiv from 1895 to present, so a normal is simply the 30-year average of the gridded data. USCRN observations since commissioning to the present (4-9 years) were used to find relationships to nearby COOP stations and estimate normals at the USCRN sites using the normals at the surrounding COOP sites derived from full 1981-2010 records (Sun and Peterson, 2005). The normal values for each month are then subtracted from each monthly temperature average to create anomalies or departures from normal that can be compared between networks over time. In the final step, the station data are interpolated to 0.25° latitude by 0.25° longitude grids over the lower 48 states and then combined in an area weighted average for the whole U.S. The final results of this process are the monthly National Temperature Index (NTI) values for nClimDiv and USCRN. Figure 1 displays the differences between nClimDiv normals and USCRN estimated normals for national maximum, mean and minimum temperature. Since the normal values in each of the networks do not maintain the same relationship from month-to-month, comparing absolute values would be confusing. 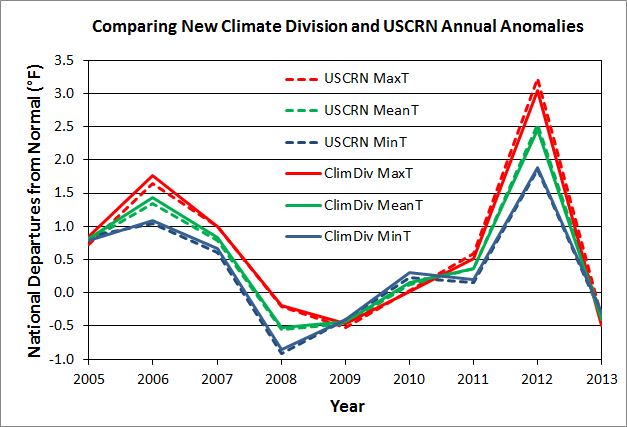 A more detailed description of the nClimGrid dataset, which is used to compute nClimDiv, is available as Vose et al., 2014. Interested users are encouraged to read Vose et al., 2014 and its citations for further information. 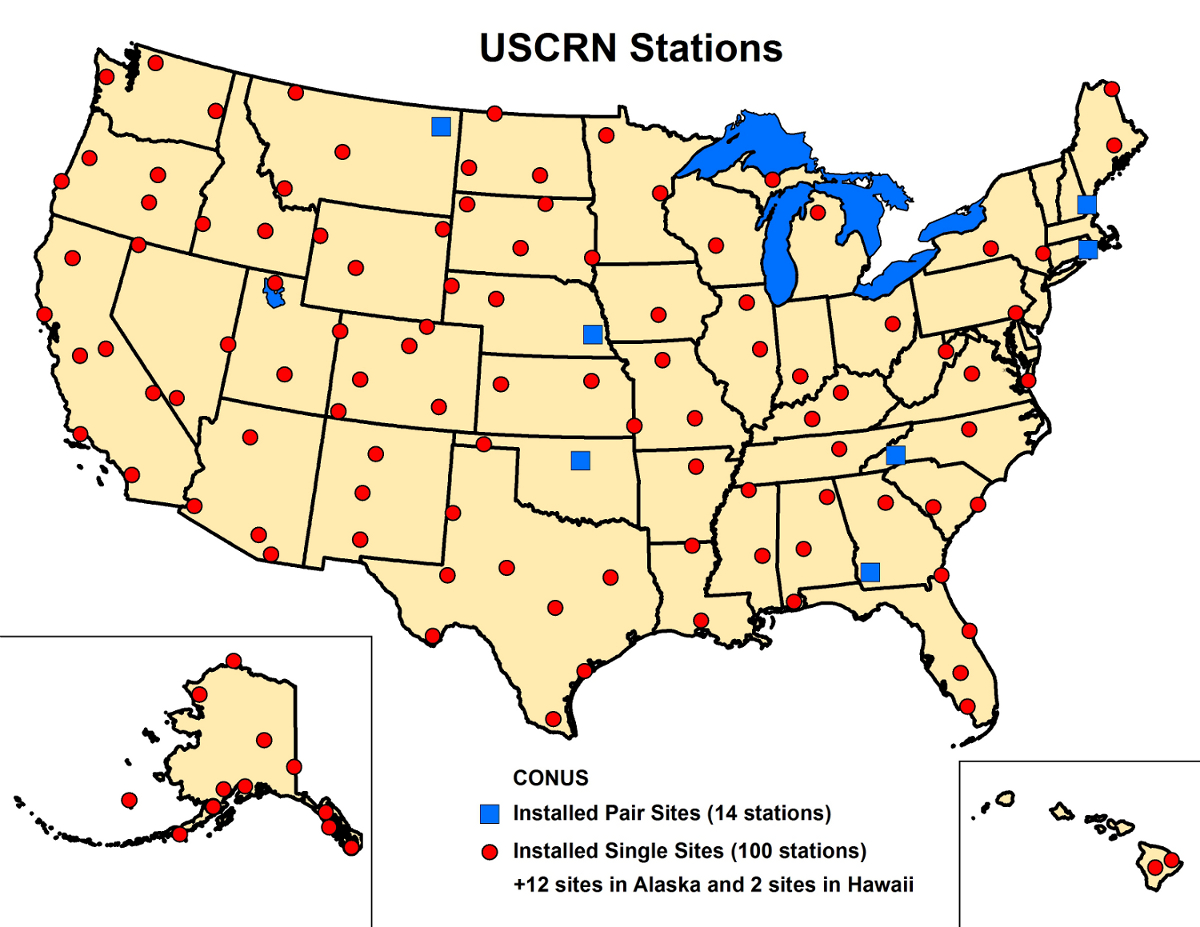 The U.S. Climate Reference Network (USCRN) The U.S. Climate Reference Network (USCRN) is a network of climate stations deployed by NOAA's National Centers for Environmental Information (NCEI) with engineering partner NOAA's Atmospheric Turbulence and Diffusion Division (ATDD). The USCRN's primary goal is to provide future long-term homogeneous temperature and precipitation observations that can be coupled to long-term historical observations for the detection and attribution of present and future climate change.

Data from the USCRN is used in operational climate monitoring activities and for placing current climate anomalies into an historical perspective. The USCRN provides the United States with a reference network that meets the requirements of the Global Climate Observing System (GCOS). The network consists of 114 commissioned stations in the contiguous United States, 12 stations in Alaska, 2 experimental stations in Hawaii, and 2 international exchange sites in Egbert, Ontario, Canada, and Tiksi, Sakha, Russia. More stations continue to be added in Alaska as the network expands to cover the state with a network similar in spatial resolution to the contiguous U.S. network.

In early 2014, the National Oceanic and Atmospheric Administration's (NOAA's) National Centers for Environmental Information (NCEI, known then as the National Climatic Data Center) began using a divisional data set based on 5 km resolution gridded temperature data. The new divisional data set, nClimDiv, differs from USHCN in several ways. In particular, nClimDiv makes use of a much larger set of stations (over 10,000) and includes observations from many networks not included in USHCN (e.g., RAWS and SNOTEL). nClimDiv also uses a different computational approach known as climatologically aided interpolation, which helps address topographic variability and changes in the station network through time. As a result, NCEI began using nClimDiv data to compute contiguous (CONUS) temperatures, replacing USHCN as the official CONUS temperature data set. Notably, both datasets use the same bias adjustment approach for addressing historical changes in station location, temperature instrumentation, observing practice, and siting conditions. 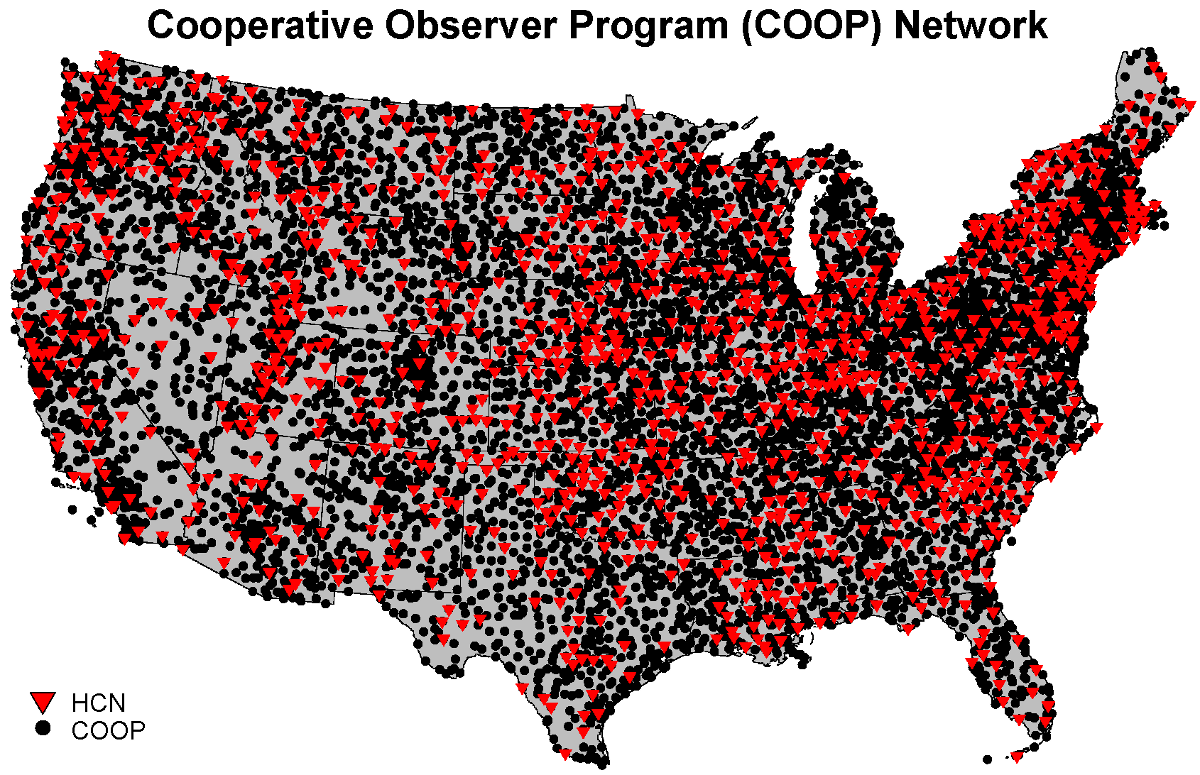 Since 1987, the National Oceanic and Atmospheric Administration's (NOAA's) National Centers for Environmental Information (formerly National Climatic Data Center) has used observations from the U.S. Historical Climatology Network (USHCN) to quantify national- and regional-scale temperature changes in the conterminous United States (CONUS). To that end, USHCN temperature records have been "corrected" to account for various historical changes in station location, instrumentation, and observing practice. The USHCN is actually a designated subset of the NOAA Cooperative Observer Program (COOP) Network. The USHCN sites having been selected according to their spatial coverage, record length, data completeness, and historical stability. The USHCN, therefore, consists primarily of long-term COOP stations whose monthly temperature records have been adjusted for systematic, non-climatic changes that bias temperature trends.