« February 2021
Note: This report catalogs recent tropical cyclones across the North Atlantic and East Pacific and places each basin’s tropical cyclone activity in a climate-scale context. It is not updated in real time. Users seeking the real time status and forecasts of tropical cyclones should visit The National Hurricane Center. 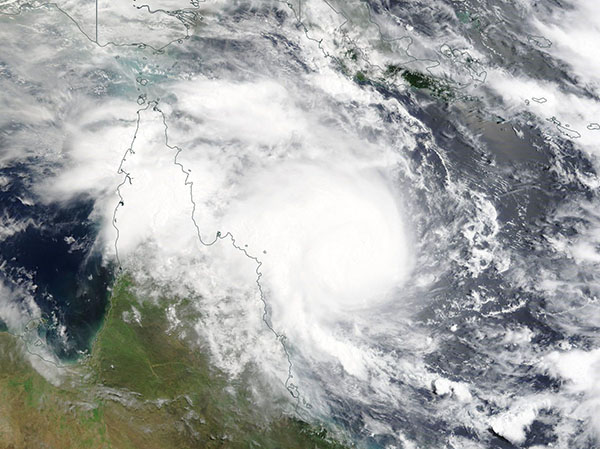 Tropical Cyclone Niran was the second category-5 storm of 2021 globally and also the second category-5 storm of the 2020/21 Southwest Pacific cyclone season. It caused widespread damage on New Caledonia even though the strongest winds remained offshore. There were also three storms in the South Indian Ocean, each of which remained far from land. Tropical Cyclone Marion peaked as a category-3 storm on February 28 but continued into early March. Tropical Cyclone Habana reached category-4 strength twice as it meandered around the central South Indian Ocean. Finally, Tropical Storm Iman lasted less than 24 hours as a tropical cyclone.

The South Indian Ocean tropical cyclone activity was near-normal in terms of the number of storms. The accumulated cyclone energy (ACE; an integrated metric for the strength, duration, and number of tropical cyclones) was more than double its climatological value in March due in large part to Habana's long lifespan. The 2020/21 season as a whole remains somewhat above normal.

NOAA National Centers for Environmental Information, State of the Climate: Tropical Cyclones for March 2021, published online April 2021, retrieved on May 10, 2021 from https://www.ncdc.noaa.gov/sotc/tropical-cyclones/202103.