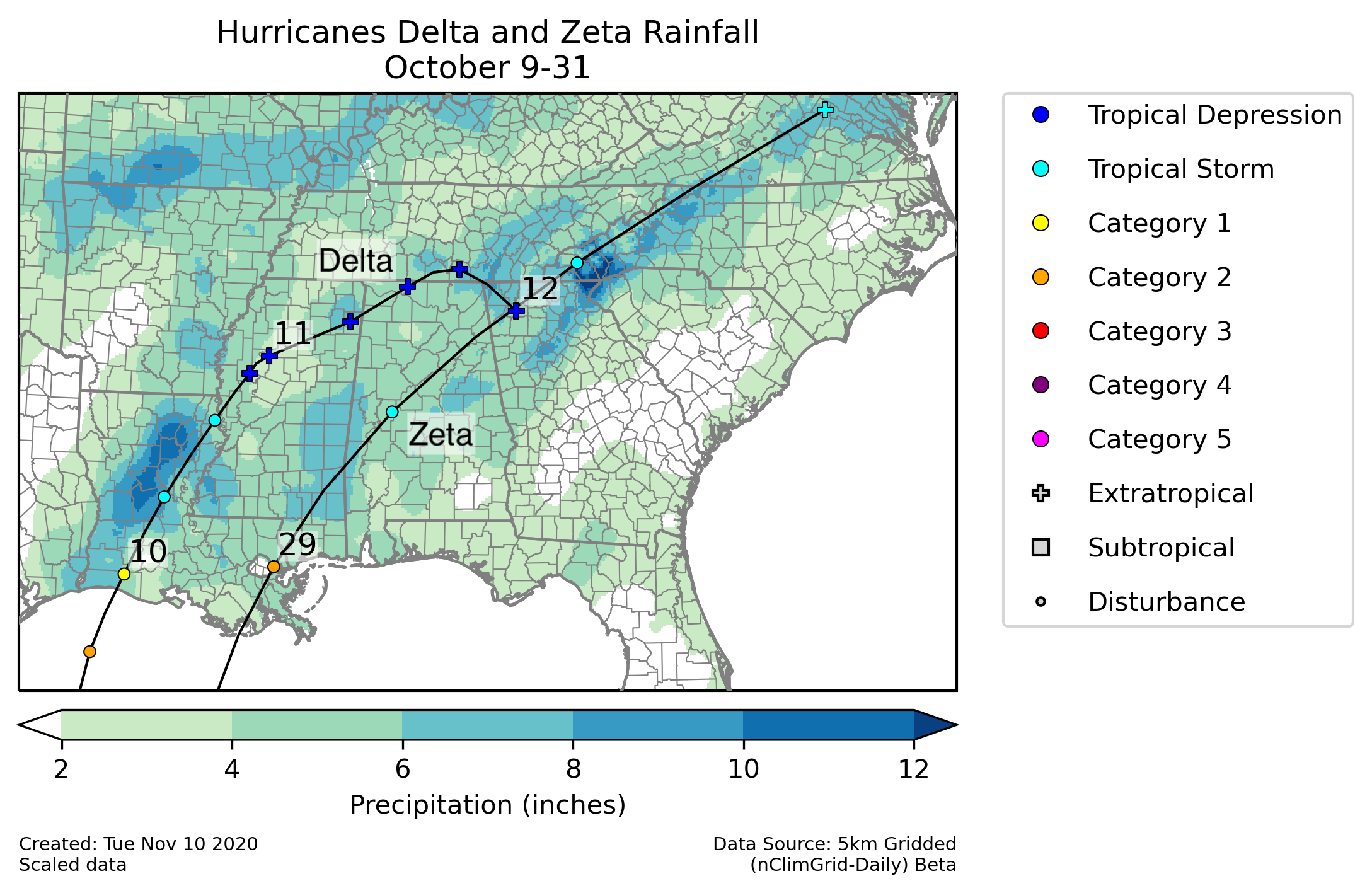 The Atlantic hurricane season remained very active in October. Four named storms developed, three of which became hurricanes, and two of those were major hurricanes. All of these totals were in the top five for Octobers since 1981. Hurricane Eta formed as a tropical depression on October 29, but it was not included in these counts because it became a named tropical storm on November 1.

The 2020 hurricane season has produced 27 named storms through October, not counting Eta. That number is three ahead of the previous record holder, 2005, through this point in the season. In fact, the 29th storm of the season, Tropical Storm Theta, formed on November 10. That breaks the 2005 record for the most storms in a season.

In terms of Accumulated Cyclone Energy (ACE), which measures the strength and duration of tropical storms and hurricanes, October 2020 was the 6th most active October on record. Despite the record number of storms in 2020, many of them have been weak or short-lived. As a result, the ACE for the 2020 season through October is only the 10th most active in the last 40 years.

The 2020 Atlantic hurricane season has also been noteworthy for its impacts on the contiguous U.S. Two hurricanes, Delta and Zeta, made landfall during October. Each storm produced heavy rainfall over a swath from Louisiana to Virginia. These storms were the 10th and 11th named storms to make landfall in the contiguous U.S. in 2020, which breaks the previous record of 9 from 1916. Of those 11 named storms, six were hurricanes, which ties the record from 1886 and 1985. Perhaps most remarkable is that five of the named storms ( Cristobal, Marco, Laura, Delta, and Zeta) made landfall in Louisiana—the most any state has experienced in a single year. Western Louisiana has been particularly hard hit as Delta made landfall about 12 miles from where Laura did six weeks earlier.

In contrast to the Atlantic, the East Pacific has been quieter than normal. October produced only one tropical storm, Norbert. Another storm, Hurricane Marie, developed in September but became a hurricane during October. Marie was just the fourth hurricane of the 2020 season, which is tied for the second fewest since 1981.