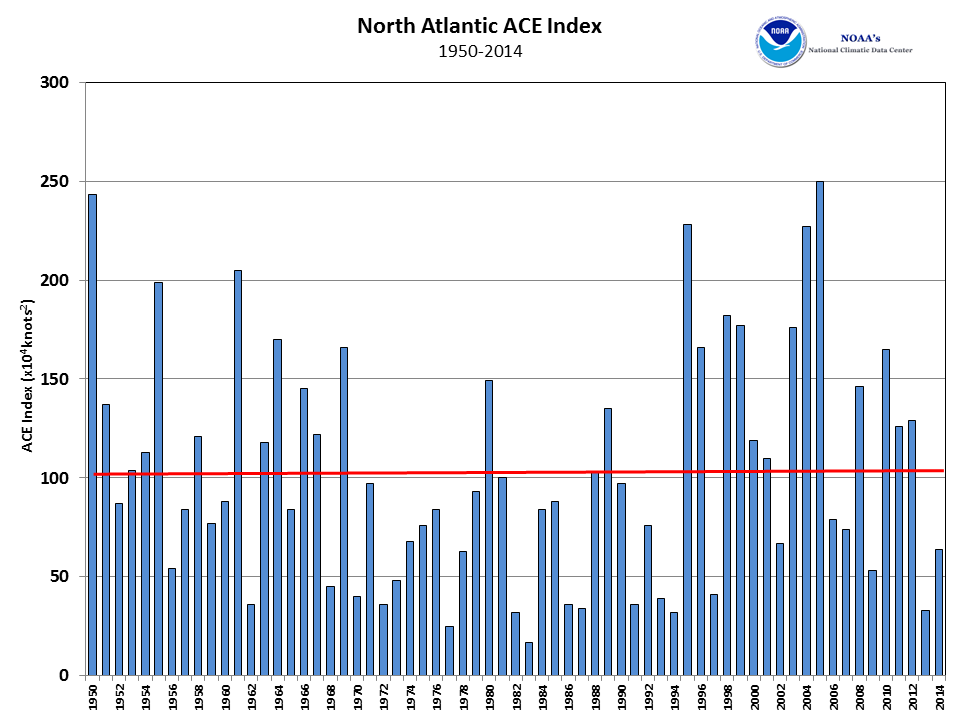 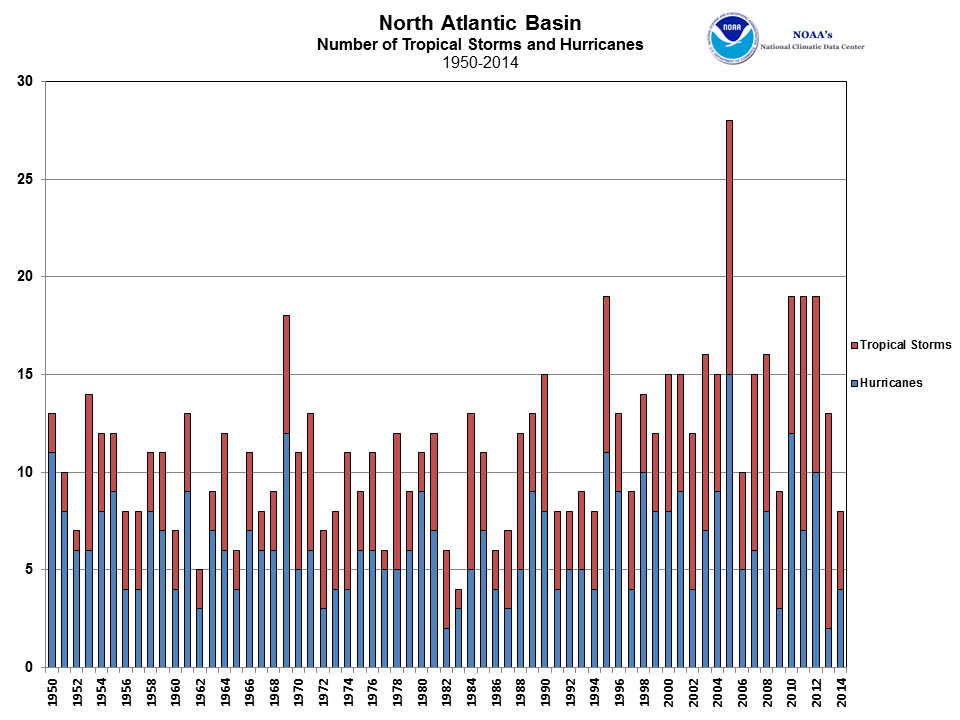 The Accumulated Cyclone Energy (ACE) index of tropical cyclone activity also indicated a below-average season in the North Atlantic. The ACE index is used to calculate the intensity of the hurricane season and is a function of the wind speed and duration of each tropical cyclone. The 2014 Atlantic hurricane season had an approximate ACE of 64 (x104 knots2) which was below the 1981-2010 average value of 104 (x104 knots2). Despite the below-average number of named storms, the ACE was higher than last year (2013), which had more storms, because of the two major hurricanes that occurred in 2014. 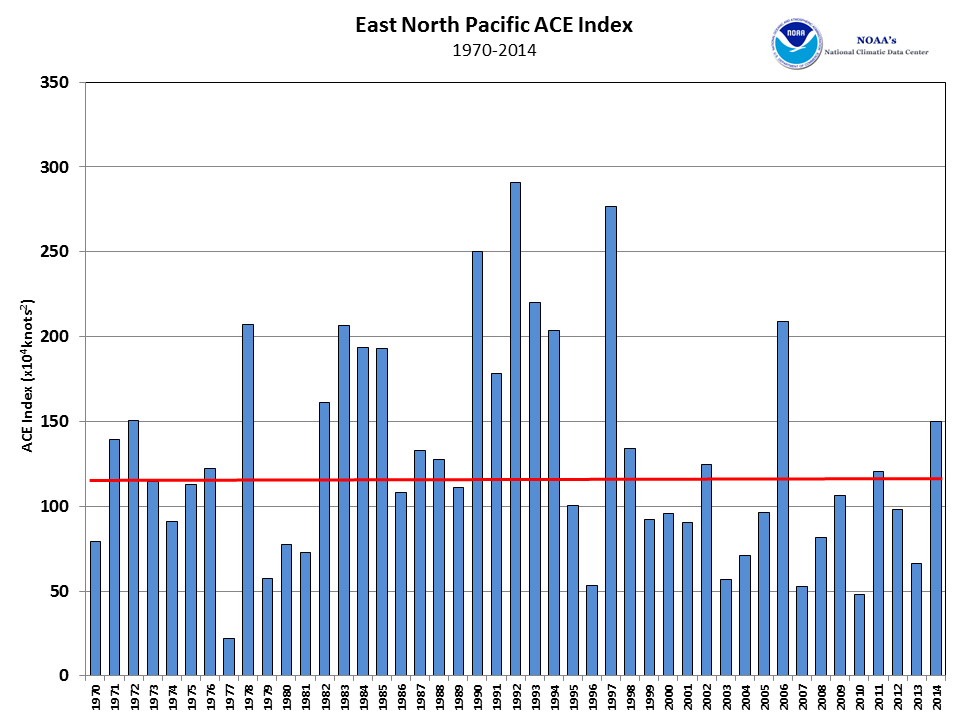 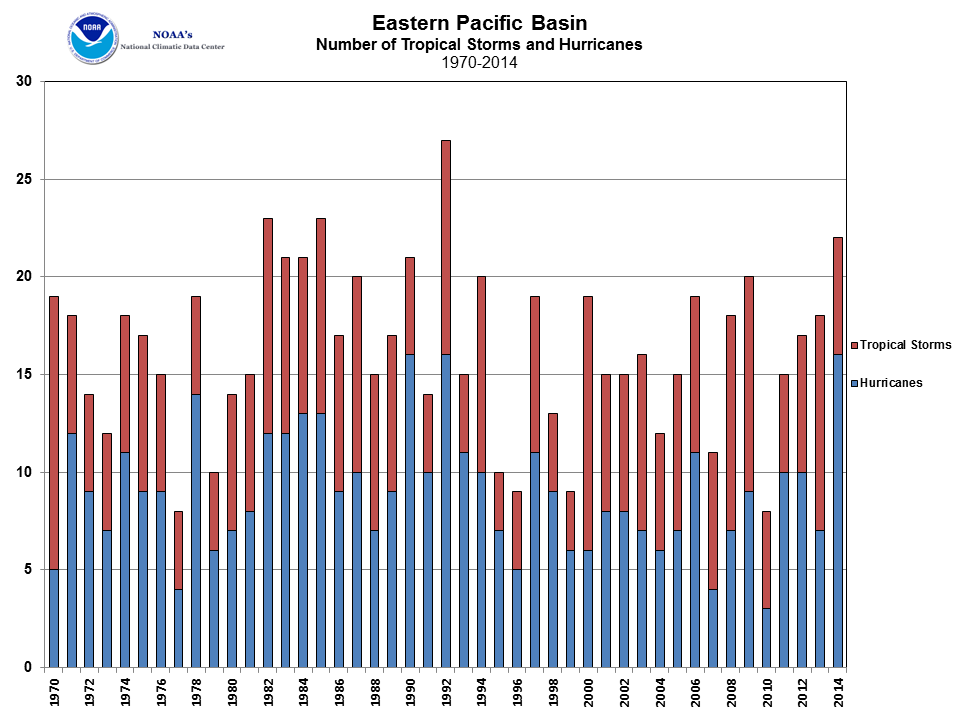 The 2014 East Pacific Hurricane Season had 22 named storms, of which 16 were hurricanes, and of these nine were major hurricanes. The 1981-2010 average number of named storms in the East Pacific is 16.5, with 8.9 hurricanes, and 4.3 major hurricanes. The number of named storms was the highest since 1992 and the third highest since reliable records began. The number of hurricanes tied with 1990 and 1992 as the most on record for the basin. Several of the storms impacted Mexico and the Hawaiian Islands causing significant damage and over 40 fatalities. Several remnant low pressures from the active East Pacific tropical cyclone season brought heavy rain into the Southwest and Southern Plains regions of the United States, causing record flooding and bringing some drought relief. The ACE index for the season was 150 (x104 knots2), which is above the 1981-2010 average of 132 (x104 knots2) and the most since 2006. Several noteworthy storms occurred including Hurricane Amanda in May which had maximum sustained winds of 155 mph and a central minimum pressure of 932mb — the strongest May hurricane on record for the basin. Hurricane Iselle, which formed in the East Pacific basin and moved into the central Pacific made landfall on the Big Island of Hawaii as a tropical storm, marking the first landfall of a tropical cyclone in Hawaii since Hurricane Iniki in 1992 and only the second tropical cyclone to make landfall on the Big Island. 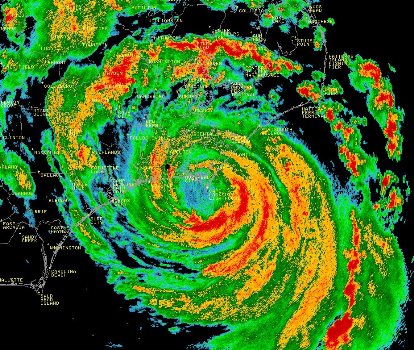 On June 28th, a low pressure system moved off the southeastern U.S. coast and developed into Tropical Storm Arthur on July 1st. Conditions were favorable for tropical cyclone development with low wind shear and warm sea surface temperatures in the region. Arthur slowly drifted northward and strengthened into a hurricane on July 3rd. Arthur reached Category 2 strength with winds of 100 mph and a central minimum pressure of 973 mb before making landfall near Beaufort, North Carolina at 11:15 pm local time that same day. The stormed continued a north-northeastward track as it moved through Pamlico Sound, between the North Carolina mainland and the Outer Banks. Arthur's movement then became more northeastward and moved back out to sea. Outer rain bands from the storm impacted parts of New England, but the storm did not make another direct landfall in the United States. Arthur's largest impacts were heavy rainfall in North Carolina and New England, as well as high storm surge in North Carolina. The storm surge at Oregon Inlet, North Carolina reached 4.5 feet with wave heights over 21 feet. This contributed to massive coastal erosion with water overrunning the only highway along the Outer Banks, which has an elevation of only a few feet above sea level in most locations. Hurricane Arthur was the first hurricane to make landfall in the U.S. since Isaac in August 2012 and the first Category 2 hurricane to make landfall since Ike in 2008. Arthur was also the earliest land falling hurricane in North Carolina and only the fourth hurricane to make landfall in the state during July since reliable records began in 1851. The previous earliest North Carolina hurricane occurred on July 11, 1901. 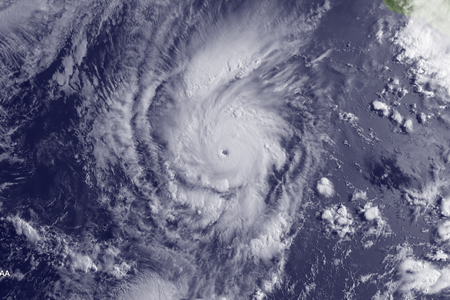 Hurricane Amanda developed from a tropical depression that formed on May 22nd south of the Gulf of Tehuantepec off of Mexico's Pacific Coast, and reached tropical storm strength on the 23rd. Amanda rapidly strengthened to hurricane strength by the 24th. The hurricane reached its peak intensity late in the day on the 24th with winds of 155 mph (Category 4) and a central minimum pressure of 932 mb. Hurricane Amanda quickly dissipated to a tropical storm and a remnant low by the 29th. The largest impacts from the storm were heavy rains along Mexico's mountainous coast, which caused flooding and landslides. At least one fatality was blamed on the heavy rains. Hurricane Amanda was an usual storm for the East Pacific Basin. The storm was the second-earliest major hurricane (Category 3 or higher) for the basin, behind Hurricane Bud that reached Category 3 strength early in the day on May 24, 2012. Hurricane Amanda was also the strongest May hurricane on record for the East Pacific, surpassing Hurricane Adolph in 2001 that had maximum sustained winds of 145 mph. 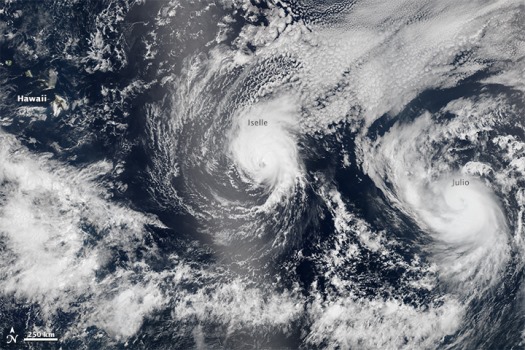 Hurricane Iselle formed off the west coast of Mexico on July 31st as a tropical storm in the middle of the East Pacific Basin. The storm moved westward and strengthened over the next week. The storm reached peak intensity on August 4th, with sustained winds of 140 mph (Category 4) and a central minimum pressure of 947 mb. The storm continued its westward movement towards the Hawaiian Islands and slowly weakened. Iselle made landfall on Hawaii's Big Island on August 7th as a tropical storm with sustained winds of 60 mph. Iselle was the strongest tropical cyclone on record to make landfall on the Big Island and was the first tropical cyclone to make landfall anywhere in Hawaii since Hurricane Iniki in 1992. Iselle was also only the second tropical storm strength cyclone to directly impact the Big Island. As Iselle moved through the archipelago, tropical storm-force winds impacted much of the state, with hurricane force winds measured atop Mauna Kea (13,800 feet elevation). The largest impacts from the storm included strong winds, heavy rainfall, and high surf. Some locations, in orographically enhanced regions, received over a foot of rain causing flooding and road washouts. Over 21,000 homes and business lost power due to downed trees. One fatality was reported due to the high flood waters. Significant damage was also reported to agricultural crops including coffee, macadamia trees, and papayas. After the storm moved through the islands, unfavorable environmental conditions and the interaction with the high terrain caused Iselle to quickly dissipate by August 9th. As Iselle was tracking through Hawaii, the islands were also threatened by Hurricane Julio. Hurricane Julio ultimately passed north of Hawaii generating heavy surf along the northern coasts. This marked the first time on record that two simultaneous tropical cyclones threatened the state at the same time. 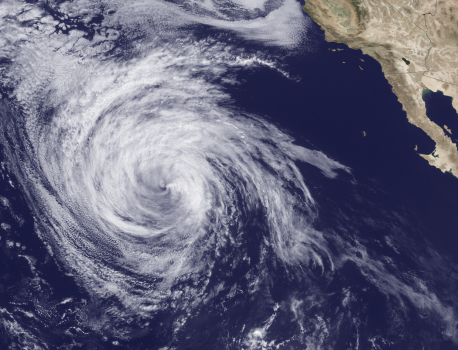 Tropical Storm Marie formed off the western coast of Central America on August 22nd. The storm moved northwesterly, parallel to the coast of Mexico over the next week reaching Category 5 strength on August 24th with sustained winds of 160 mph and a central minimum pressure of 918 mb. This was the strongest, and the only Category 5, tropical cyclone of the 2014 East Pacific season to date. Marie was also a large storm, with tropical storm force winds extending over 250 miles from the center. The largest impacts of Marie were the heavy surf and strong waves it generated from the Baja Peninsula in Mexico, northward to Southern California. Waves up to 20 feet were generated at beaches near Los Angeles, causing significant coastal erosion and damage to piers and coastal property. This was the largest high surf event for that region of California since July 1996. 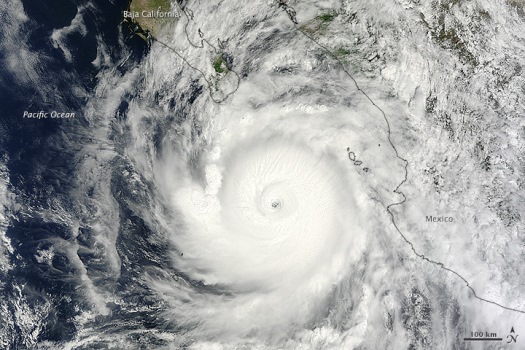 Odile developed from a low pressure system south of the Mexican Pacific Coast, reaching tropical storm strength on September 10th. Odile moved towards the northwest, parallel to the coastline and became a hurricane on September 13th. The storm then underwent rapid intensification, reaching its maximum strength on September 14th with winds of 130 mph (Category 4) and a central minimum pressure of 922 mb. Odile weakened slightly while undergoing an eye wall replacement cycle on the 15th before making landfall near Cabo San Lucas with winds of 125 mph (Category 3). The storm then moved along the Baja Peninsula, bringing flooding rains, winds, and storm surge to much of the region. The Mexican government declared a state of emergency, setting up shelters for thousands of local residents and over 26,000 foreign travelers visiting the Baja Peninsula. The system dissipated to a remnant low on the 19th and moved into the southwestern U.S. where the storm brought heavy rains to parts of drought stricken Arizona, California, New Mexico, and Texas. Odile's 125-mph winds at landfall marked the strongest hurricane on record to make direct landfall on Mexico's Baja Peninsula. Odile was also the ninth strongest hurricane on record to make landfall anywhere along Mexico's Pacific Coast. Over 90 percent of Baja California Sur lost power during the event, with an estimated 2,100 power poles being downed across the Mexican state. More than 11,000 people were evacuated due to flood waters alone. In Mexico alone, at least 15 fatalities were confirmed from the storm with damages expected to exceed one billion U.S. dollars.