« November 2012
June 2013 »
Note: This report catalogs recent tropical cyclones across the North Atlantic and East Pacific and places each basin’s tropical cyclone activity in a climate-scale context. It is not updated in real time. Users seeking the real time status and forecasts of tropical cyclones should visit The National Hurricane Center.
d 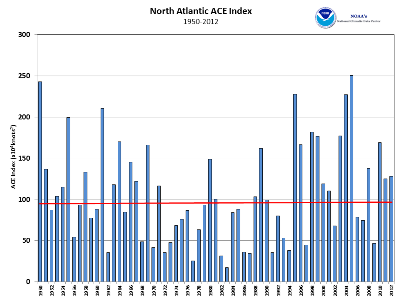 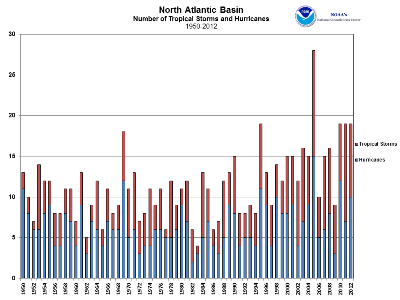 The Accumulated Cyclone Energy (ACE) index of tropical cyclone activity also indicated an above-average season. The ACE index is used to calculated the intensity of the hurricane season and is a function of the wind speed of each tropical cyclone. The 2012 Atlantic hurricane season had an approximate ACE value of 128 (x104 knots2) which was above the 1981-2010 median value of 93 (x104 knots2) and nearly the same value as the 2011 season. The highest ACE index on record occurred during the 2005 season, which had an ACE index of 250 (x104 knots2). Although there was an extremely high number of tropical storms during the year, the below-average number of major hurricanes kept the seasonal ACE value relatively low compared to more active years.

The above-average season was associated with much warmer-than-average sea surface temperatures across a large area of the North Atlantic, and an active African easterly jet that generated numerous tropical waves which developed into tropical storms. Above-average wind shear and atmospheric stability inhibited the tropical storms that did develop from becoming major hurricanes.

Several aspects of the 2012 North Atlantic hurricane season were unique. Tropical Storm Beryl, which formed on May 25th and made landfall near Jacksonville, Florida, on May 28th, was only the third time on record that the second named storm of the year formed before June 1st (the official start of the hurricane season). Beryl was also the strongest tropical storm to make landfall in the U.S. during the month of May. Tropical Storm Debby’s formation on June 23rd was the first time there have been four named storms in the basin before July 1st. Hurricane Nadine, which formed on September 12th and dissipated on October 4th was the fifth longest-lived tropical cyclone on record for the North Atlantic. Post-tropical cyclone Sandy, which made landfall near Atlantic City, New Jersey, in October, will likely be the second costliest storm system to impact the United States, behind Hurricane Katrina. 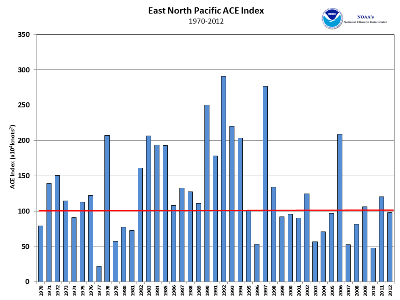 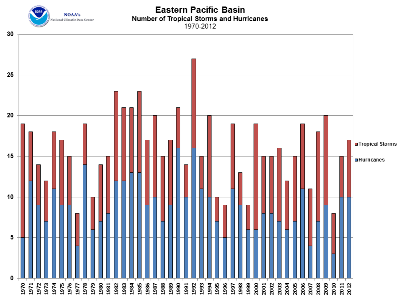 The Eastern Pacific Basin experienced slightly above-average tropical cyclone activity during 2012. The basin had 17 named storms, 10 hurricanes, and five major hurricanes. On average the basin experiences 15 named storms, nine hurricanes, and four major hurricanes. The ACE value of 98 (x104 knots2) was slightly below the 1981-2010 median of 100 (x104 knots2) and marked a near-normal season for the basin. During the entire season, ENSO-neutral conditions (neither El Niño nor La Niña) were present across the Equatorial Pacific, which favors a near-average hurricane season for the basin. Hurricanes Carlotta and Paul caused significant damage in Mexico, while six additional storms threatened land but had minimal impacts.

Hurricane Bud formed early in the season, reaching Category 3 strength on May 24th with sustained winds of 115 mph and a minimum central pressure of 961 mb — the earliest date for a storm of this strength on record for the Eastern Pacific Basin. During the subsequent days, Bud quickly weakened and by the 26th was only a remnant low. The remnants of the storm caused minimal damage along Mexico’s Pacific coast.

Hurricane Carlotta developed on June 13th and reached tropical storm strength by the 14th as it moved over warm waters with low wind shear in the atmosphere. On the 15th Carlotta strengthened into a Category 2 hurricane with winds of 105 mph. Carlotta made landfall near Puerto Escondido, Mexico, on the 16th after weakening to a Category 1 hurricane with winds of 90 mph. The storm caused over $100 million U.S. dollars worth of damage and led to at least 7 fatalities.

Hurricane Paul formed from a trough of low pressure in mid-October reaching tropical storm strength on October 13th. Warm water, low shear, and high relative humidity caused Paul to rapidly intensify into a hurricane on the 15th. Paul reached maximum strength late in the day on the 15th with sustained winds of 120 mph, marking the fifth major hurricane of the 2012 season. Paul’s strength waned on the 16th, and weakened to a tropical storm and eventually a tropical depression on the 17th. Paul brushed the coast of Baja California Sur, causing damage in La Paz. There were no reported fatalities from the storm, and damage was estimated at $15.5 million U.S. dollars.