« December 2010
January 2011 »
Note: This report catalogs recent tropical cyclones across the North Atlantic and East Pacific and places each basin’s tropical cyclone activity in a climate-scale context. It is not updated in real time. Users seeking the real time status and forecasts of tropical cyclones should visit The National Hurricane Center. 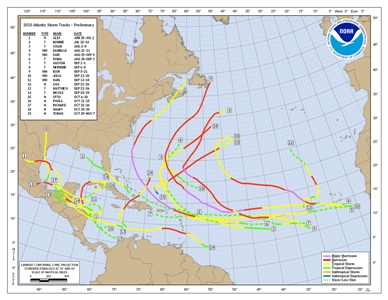 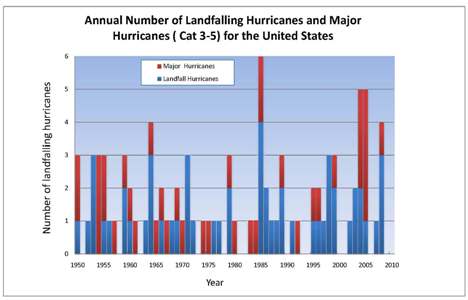 The Accumulated Cyclone Energy (ACE) index was 169x104 knots2 for the 2010 North Atlantic hurricane season, which is much above average. This value is 11th largest since 1948 and about 190 percent of the 1951–2000 median value. A "hyperactive season" is defined by having a seasonal ACE value greater than 183 percent of the median. The relatively lower ACE value compared to the number of storms is due to the lack of any Category 5 hurricanes during the season. According to the National Hurricane Center (NHC), the above average ACE value and number of storms were attributable to record warm Atlantic waters, combined with the favorable winds coming off Africa and weak wind shear aided by La Niña. The jet stream’s position contributed to warm and dry conditions in the eastern U.S. and acted as a barrier that kept many storms over open water. Also, because many storms formed in the extreme eastern Atlantic, they curved out to sea without threatening land due to the North Atlantic (Bermuda) High.

Although Bonnie was the only tropical storm to affect the continental U.S., other countries along the western Atlantic were not spared. Alex, Hermine, Karl, Nicole, Matthew, Paula, and Richard, all directly impacted Mexico and Central America bringing flooding rains and strong winds. Hurricane Otto brought torrential rainfall to Puerto Rico, while Tomas left over 40 dead in St. Lucia and Haiti. The remnants of Hurricane Igor made landfall in eastern Canada, and was the most costly storm to ever impact Newfoundland. Tropical storms and hurricanes killed more than 250 people in the Caribbean and Central America this season. The deadliest storms were Tropical Storm Matthew, Hurricane Tomas and Hurricane Alex. More information on individual storms can be found in the monthly Tropical Cyclone report and the Global Hazards report. 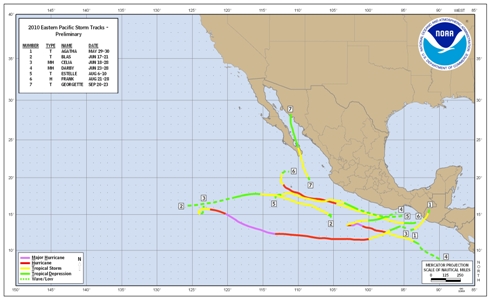 While the North Atlantic was having one of its busiest tropical cyclone seasons on record, the Eastern Pacific had a record quiet season. During the 2010 season, the Eastern Pacific experienced seven named storms, three hurricanes, and two major hurricanes. According to the NHC, this is the fewest named storms (previous record low was eight in 1977) and the fewest hurricanes (previous record low was four in 1969, 1970, 1977 and 2007) on record since the satellite era began in the mid-1960s. On average, the eastern North Pacific season produces 15 named storms, nine hurricanes and four major hurricanes.

June was the busiest month in the East Pacific basin; four tropical cyclones developed, one became a tropical storm, and two became major hurricanes. Hurricane Celia became a rare June Category 5 storm. The ACE index for the entire season was 50x104 knots2, marking the second lowest ACE on record for the basin, behind 1977 which had an ACE index of 22x104 knots2 . The extremely strong Hurricane Celia, which had maximum sustained winds ofh 160 mph (260 km/h) and an estimated central pressure of 921 mb, helped to increase the season ACE value above 1977 levels. According to the NHC, the record low activity was attributable to La Niña and the cooler sea surface temperatures and increased wind shear across the basin.