Hurricane Alex developed off the North Carolina coast from a tropical depression that had formed at the end of July approximately 175 miles south-southeast of Charleston, South Carolina. Alex quickly and unexpectedly intensified to a category 2 storm with sustained winds close to 100 mph (85 kts) on August 3rd. The outer wall of the eye brushed the Outer Banks of North Carolina at Cape Hatteras, but the storm did not officially make landfall. The strongest winds remained offshore, although sustained category one wind-speeds were recorded on the Outer Banks. Alex continued to strengthen as it moved northward and is the strongest Atlantic tropical storm on record north of 38° North, with maximum sustained winds at 120 mph (105 kts).

Tropical Storm Bonnie came ashore on August 12th in Florida's Panhandle with maximum sustained winds of around 50 mph (43 kts). Bonnie formed in the southern Gulf of Mexico on August 9th from the remnants of a tropical depression, which had degenerated into a tropical wave as it crossed the Caribbean Sea, but then re-intensified. Bonnie moved to the northwest and then north and reached maximum sustained winds of 65 mph (56 kts) on August 11th.

Hurricane Charley began as a tropical depression that formed just north of Trinidad and Tobago on August 9th. Slowly strengthening and moving west-northwest across the Caribbean Sea, Charley reached hurricane strength on August 11th, just south of Jamaica as it turned to a more northerly track.

The hurricane intensified rapidly before becoming a powerful category four storm with estimated surface winds of 145 mph (126 kts). Charley made landfall along the west coast of Florida just north of Fort Myers at Cayo Costa on Friday 13th. A wind gust of 111 mph (97 kts) was measured at the Punta Gorda Airport before the instrument failed. Damage from the storm was extensive and costs will likely total well over 10 billion dollars. At least 16 people were killed as Charley moved across Florida and over 2 million customers lost power. Charley maintained hurricane strength as it moved across the Florida Peninsula though windspeeds dropped to approximately 86 mph (75 kts, category one) as it reached the east coast of the state and re-emerged over Atlantic waters.

As the hurricane moved north-northeast and made a second landfall along the South Carolina coast around McClellanville (between Charleston and Georgetown, SC), sustained winds were still category one hurricane strength. Charley quickly weakened after landfall, but maintained tropical storm force winds as far north as coastal New England. Charley dissipated on August 15th as it moved across Massachusetts and towards the Canadian Maritimes. Rainfall along the east coast totaled 1-3 inches (25-75 mm) in many locations, but Charley's rapid forward movement ensured that rain totals were less than if it had been moving slowly. For more information on Charley's impacts, please see the Hazards report.

Danielle was a strong category two hurricane at its peak intensity, but never affected land. It developed as a tropical storm on August 13th just south of the Cape Verde Islands in the far eastern Atlantic and tracked west-northwestward. Danielle became a hurricane on the 14th reaching a maximum sustained wind of 105 mph (91 kts). It dissipated on the 21st about 855 miles west-southwest of the Azores.

Earl became a tropical storm on August 14th in the central tropical Atlantic, but was short-lived. As Earl moved westward and crossed the Windward Islands on the 15th, sustained winds were 45 mph (39 kts) with heavy rains. However, the next day as Earl moved into the eastern Caribbean, it degenerated to a tropical wave. 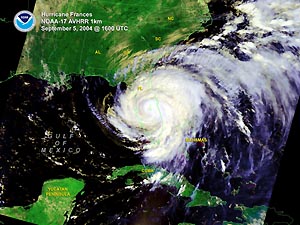 A tropical depression in the eastern Atlantic that was later to become Hurricane Frances developed on August 24th and became a tropical storm the next day as it moved northwestward. Strengthening to a hurricane on the 26th while in the central Atlantic, Frances then turned westward and continued to intensify.

At the end of August, Hurricane Frances was a 140 mph (kts) storm (category 4) and was located 125 miles north of Puerto Rico. Further details on Frances can be found in the September report.

Gaston began as a tropical depression on August 27th about 140 miles southeast of Charleston, South Carolina, becoming a tropical storm the following day. Gaston moved toward the coast as it strengthened and made landfall near McClellanville, South Carolina on August 29th with maximum sustained winds at 70 mph (61 kts). The storm quickly weakened to a tropical depression and Gaston's main impact was flooding as it drenched parts of North Carolina and Virginia during its northeastward passage over land. Downtown Richmond, Virginia suffered severe flooding from the rainfall associated with Gaston. The storm re-emerged over water, east of Delaware, and regained tropical storm strength. It then traveled northeastward and weakened as it moved past Nova Scotia.