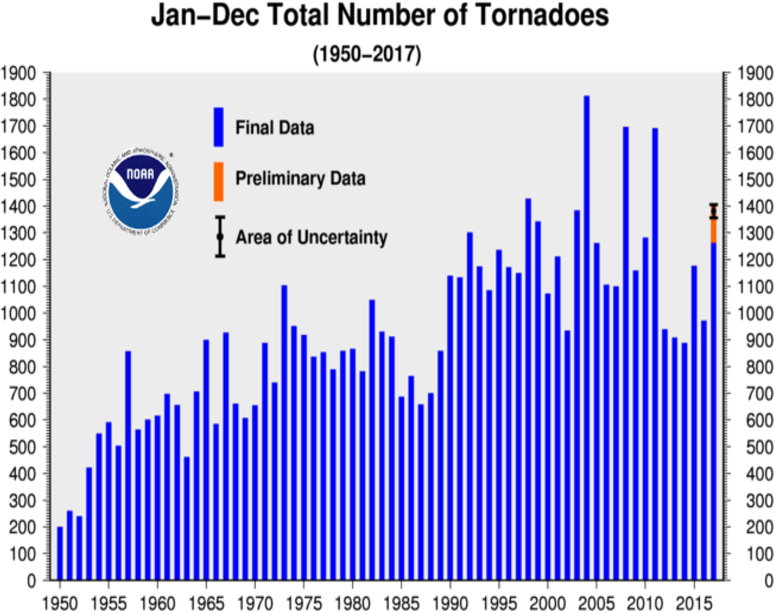 In contrast to the previous four years, tornado activity across the U.S. during 2017 was above average. During January-September there were 1,262 confirmed tornadoes with 144 preliminary tornado reports still pending confirmation for October-December. This brings the preliminary tornado count to 1,406 with the final count expected to be slightly lower. The 1991-2010 annual average number of tornadoes for the U.S. is 1,253. According to the preliminary numbers, 2017 ranks as the fifth highest annual tornado count on record and the most since 2011. As with most years, there were several large and destructive tornado and severe weather outbreaks during 2017. The deadliest tornado outbreak occurred in January with the most destructive in terms of property losses occurring in spring. In total, there were 34 tornado-realted fatalities in 2017, 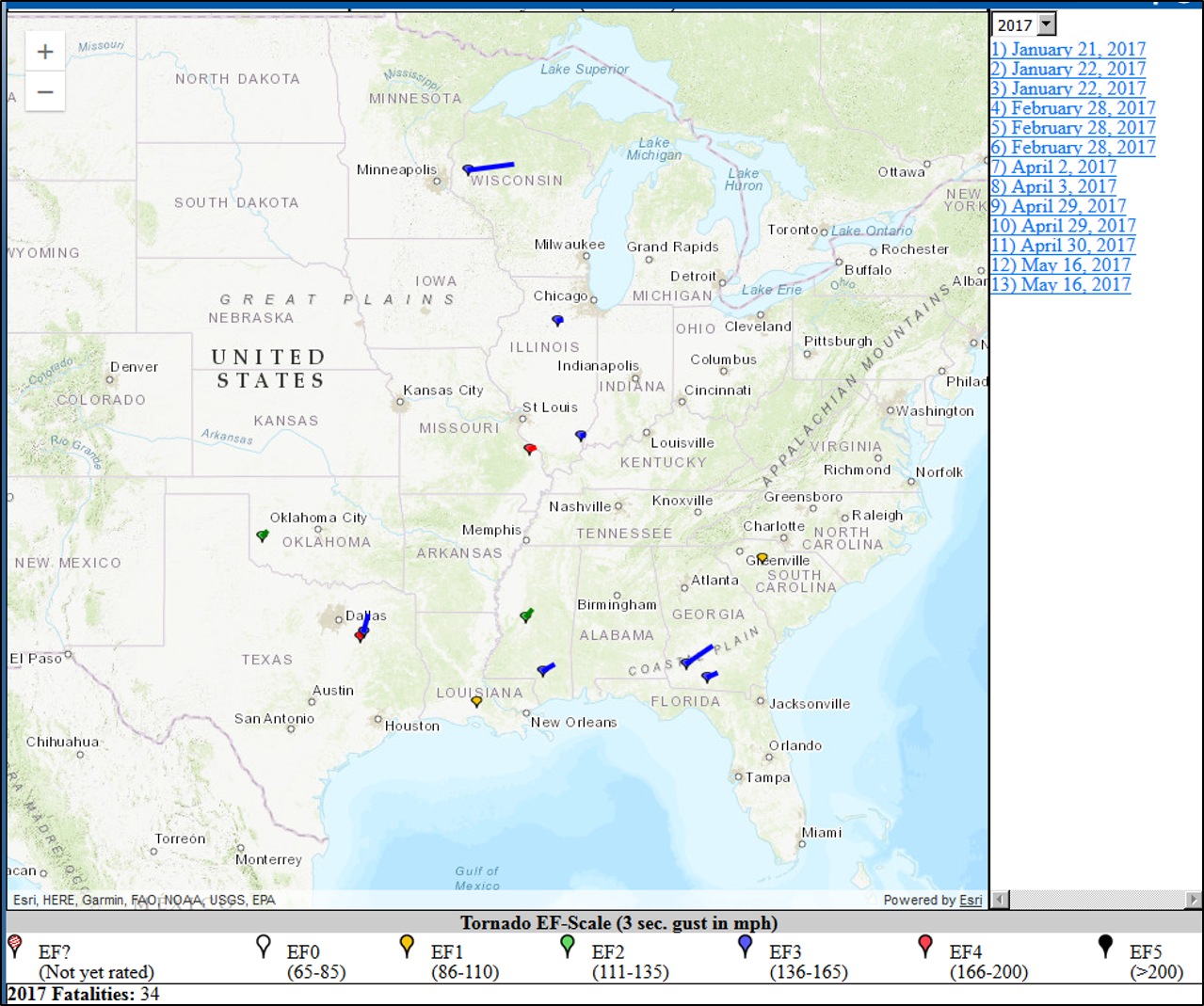 The deadliest outbreaks of the year occurred early in 2017 with 20 fatalities reported during a late-January tornado outbreak across the South. The deadliest tornado of the year was during this outbreak and impacted Brooks, Cook, and Berrien counties in southern Georgia and killed 11 people. In total there were 34 tornado-related fatalities reported during 2017 — 20 in January, four in February, eight in April and two in May. During the year there were three tornado outbreaks that had costs exceeding $1 billion in damages — the January 20-22 outbreak in the South, the February 28-March 1 outbreak in the Midwest and Southeast, and the March 6-8 outbreak in the Midwest. Five other billion dollar disasters had some damages that were associated with severe weather, hail, and tornadoes. There were also tornadoes reported with the landfalls of Hurricanes Harvey and Irma.

Most months of the year had above-average tornado activity, particularly during the first half of 2017. In January there were 142 confirmed tornadoes which is the second most on record for the month behind January 1999 when there were 209 tornadoes. The majority of the tornadoes were during the three-day outbreak late in the month. February also saw the second most tornadoes on record for the month with 115, behind the 147 tornadoes during the same month in 2008. Late in the month, a usual storm system brought tornadoes to the Northeast with an EF-2 impacting northeastern Pennsylvania and an EF-1 in western Massachusetts. This was the first tornado observed in Massachusetts during February since reliable records began in 1950.

For March there were 176 confirmed tornadoes, again marking the second most active March on record, behind March 1976. A severe weather outbreak that spanned the last day of February and first day of March resulted in 88 preliminary tornado reports from the Central Plains through the Midwest. The more active day was February 28th with 72 preliminary tornado reports. Several of the tornadoes were strong including an EF-4 in Perry County Missouri that resulted in 1 fatality. Two separate EF-3 tornados, one in northern Illinois and another in southern Illinois, resulted in three additional fatalities. The largest single-day tornado count during March was on the 6th with 79 preliminary tornado reports across the Mid-Mississippi Valley and the Upper Midwest. Two tornadoes were confirmed in Minnesota. This is the earliest that a tornado has been observed in Minnesota and the first time a tornado has been observed anywhere in the state during March.

There were 218 confirmed tornadoes during April, the fifth most active April on record and most active since 2011. On the April 2nd, an EF-1 tornado hit a mobile home in St. Martin Parish, Louisiana killing two people. As the storm system moved to the east an EF-1 killed one person in Union County, South Carolina. There were 299 confirmed tornadoes during May, the 12th most active on record. The most active tornado sequence during May occurred from the 16th-19th when there were 129 tornado reports across the Great Plains and Upper Midwest. The deadliest day of the outbreak was May 16th when an EF-2 tornado was responsible for one fatality in Beckham County, Oklahoma and an EF-3 was responsible for one fatality in Barron County, Wisconsin and an additional 25 injuries. The tornado in Wisconsin tracked 83 miles across the northwest portion of the state, affecting four counties. The tornado was on the ground for nearly two and a half hours. One fatality was reported in Barron County, where the estimated strength of the tornado at the time was an EF-2. The strongest winds were in Rusk County where winds were estimated at 140 mph. This was one of the longest-track tornadoes on record for Wisconsin in the 1950-present period of record.

During the summer, the number of tornadoes confirmed during June was above average, while July was the first month of the year to have a below-average number of tornadoes. The number tornadoes spiked again in August with 145 confirmed for the month. Again, this was the second most number of tornadoes on record for the month with only August 2004 having more tornadoes. The majority of the tornadoes reported during the month were associated with the multiple landfalls of Hurricane Harvey and the storm's remnants as it move through the Lower Mississippi Valley from August 25th to 31st. Over the seven-day period, 73 tornadoes, mostly weak, were reported across Texas, Louisiana, Mississippi, Alabama and Tennessee.

There were a below-average number of tornadoes reported during September, more than half of the 32 tornadoes reported during the month were in the Southeast and associated with the landfall of Hurricane Irma in Florida. Tornado activity increased again for October with 85 preliminary tornado reports. Tornadoes occurred throughout the month, including with the landfalls of Hurricane Nate and Tropical Storm Philippe. The largest outbreak during October impacted the Upstate of South Carolina and Western North Carolina on October 8. There were 29 preliminary tornado reports, with most of the tornadoes weak, rated EF-1 or EF-0. Some injuries were reported and minor property damage, but there were no fatalities. Tornado activity was below-average for both November and December to round out the active year. On November 5th, a strong cold front moved through the Midwest spawning tornadoes from Illinois to Pennsylvania. There were 27 preliminary tornado reports from the outbreak. The longest-lived tornado was an EF-2 that travelled 39 miles from eastern Indiana into western Ohio. Another EF-2 hit the town of Celina, Ohio where significant damage was reported including at least 8 injuries. Another tornado outbreak struck parts of the Midwest and South on the 18th with 17 preliminary reports from Alabama to Pennsylvania.