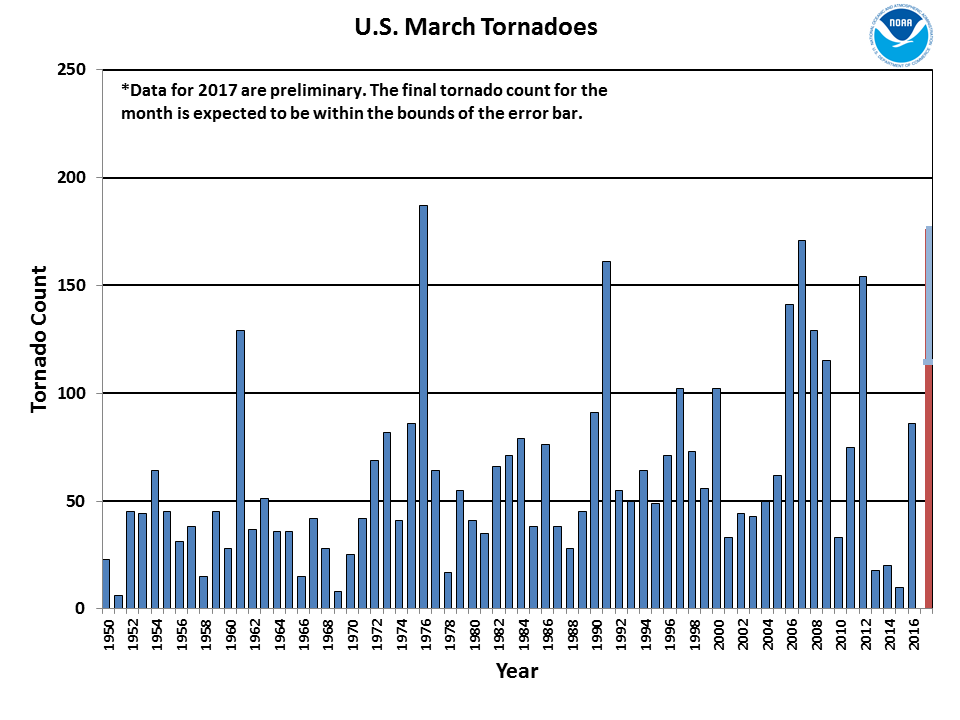 According to data from NOAA's Storm Prediction Center, during March, there were 176 preliminary tornado reports. This is more than double the 1991-2010 average of 80 for the month. Tornado activity during March is highly variable with some Marches very active and others having few observed tornadoes. The most active March was in 1976 when there were over 180 confirmed tornadoes, while the least active March was in 1951 when only six tornadoes occurred. During the most recent four years, tornado activity during March has been much below average and March 2017 breaks that short-term trend. When the final tornado count for March is determined, the month will rank among the 10 most active Marches. Despite deadly tornado outbreaks in late February and early April, there were no tornado-related fatalities reported in March.

A severe weather outbreak that spanned the last day of February and first day of March resulted in 88 preliminary tornado reports from the Central Plains through the Midwest. The more active day was February 28th with 72 preliminary tornado reports. Several of the tornadoes were strong including an EF-4 in Perry County Missouri that resulted in 1 fatality. Two separate EF-3 tornados, one in northern Illinois and another in southern Illinois, resulted in three additional fatalities.

The largest single-day tornado count during March was on the 6th with 79 preliminary tornado reports across the Mid-Mississippi Valley and the Upper Midwest. Two tornadoes were confirmed in Minnesota. This is the earliest that a tornado has been observed in Minnesota and the first time a tornado has been observed anywhere in the state during March. While some of the tornadoes caused significant damage across the region, no fatalities were reported.