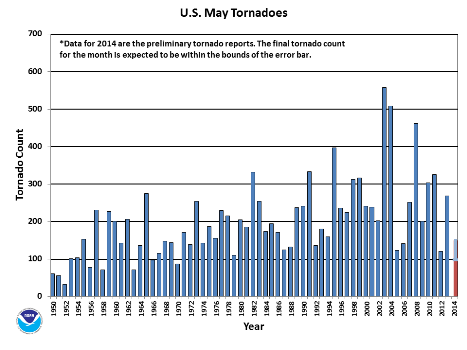 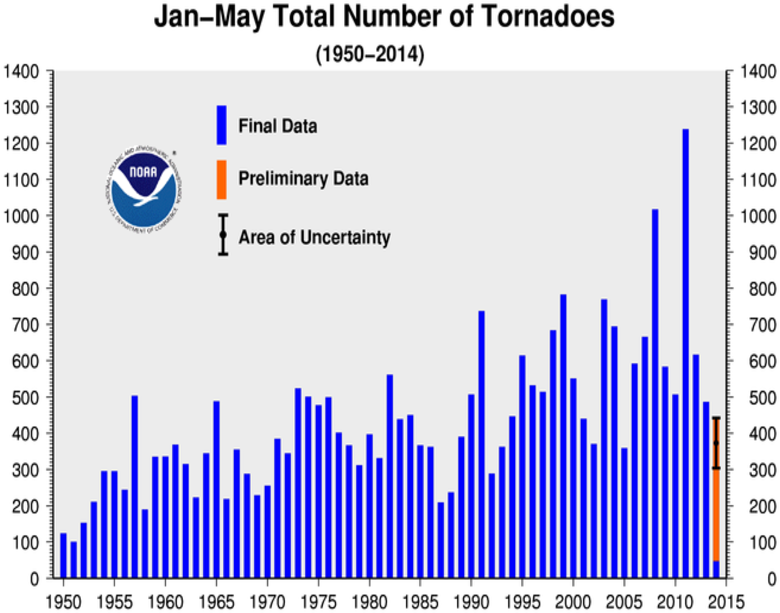 According to data from the Storm Prediction Center, during May, there were 150 preliminary tornado reports, compared to the 1991–2010 average of 276 for the month. This is less than the 220 preliminary tornado count during the preceding month of April. May is climatologically the most active tornado month during the year. In the 1950-2014 period of record, there have been 19 instances of the April tornado count being higher than the May tornado count. Despite the overall slow tornado month, there was one significant tornado outbreak during the month, with a smaller severe weather outbreak impacting the Denver metro area. There were no tornado-related fatalities reported during May. The May 2014 tornado count brings the year–to–date preliminary number of tornadoes to 442. There were 47 confirmed tornadoes during January and February, with 395 tornado reports still pending for the March–May period. The 1991-2010 average number of tornadoes during the January–May period is 575. 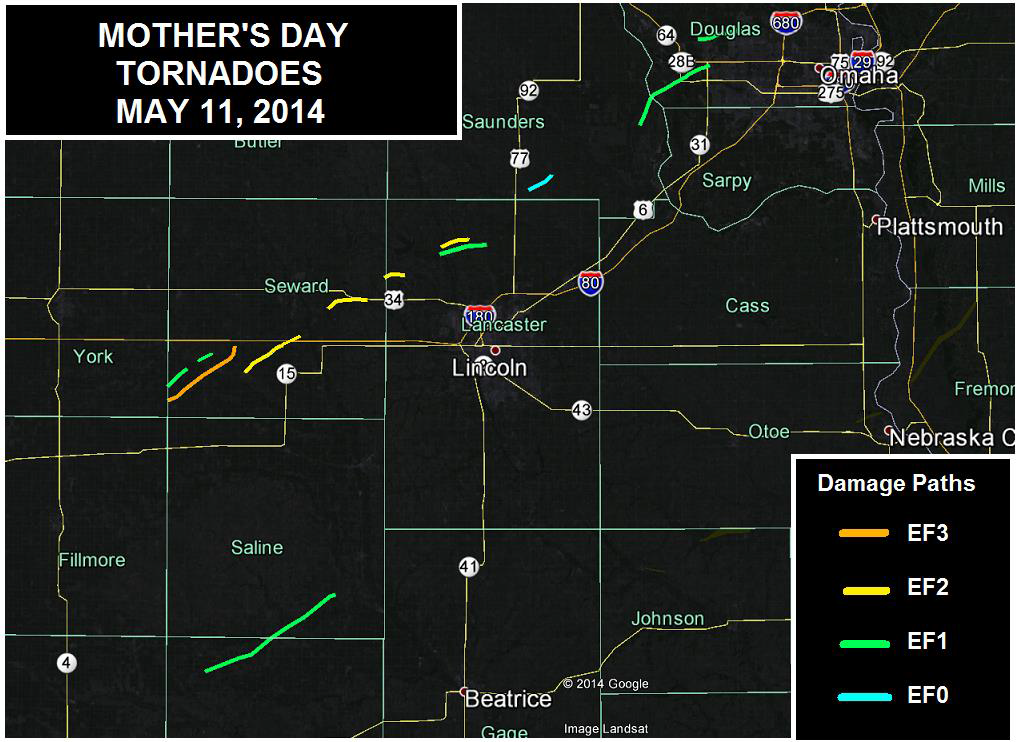 On May 10th and 11th, a strong storm system moved from the Central Rockies into the Central Plains. This same storm system dropped over three feet of snow in the Rockies. On the 10th there were 11 preliminary tornado reports, primarily across north-central Missouri and southeastern Kansas. In Missouri, an EF-2 tornado hit near Orrick and an EF-1 hit near Marshall. Both tornadoes caused structural damage to homes and businesses, but no injuries or fatalities were reported. In addition to the tornadoes, very large hail, comparable to the size of softballs, was reported that also caused damage. On the 11th, the storm activity was situated across Kansas, Nebraska, and Iowa, where there were 36 preliminary tornado reports. In Nebraska, one EF-0, six EF-1, two EF-2, and one EF-3 tornadoes were confirmed. The EF-3 tornado struck near Cordova, causing significant damage to several homes and farmsteads and injuring one person along its 14.1 mile path length. Winds associated with this tornado were estimated at 140 mph. In Iowa, the strongest tornado was an EF-2 which damaged and destroyed several homes; no injuries were reported.

On May 21st, a storm system moving through the Colorado Front Range caused severe weather in and around the Denver metro area. Nine tornadoes were reported in the region, in addition to strong straight line winds and large hail up to the size of baseballs. The most dangerous of the storms moved near the Denver International Airport, where travelers were corralled into storm shelters. Although the tornado did miss the airport by about a mile, the storm dropped large hail where it damaged numerous aircraft and caused air-traffic delays.

NOAA National Centers for Environmental Information, State of the Climate: Tornadoes for May 2014, published online June 2014, retrieved on March 5, 2021 from https://www.ncdc.noaa.gov/sotc/tornadoes/201405.