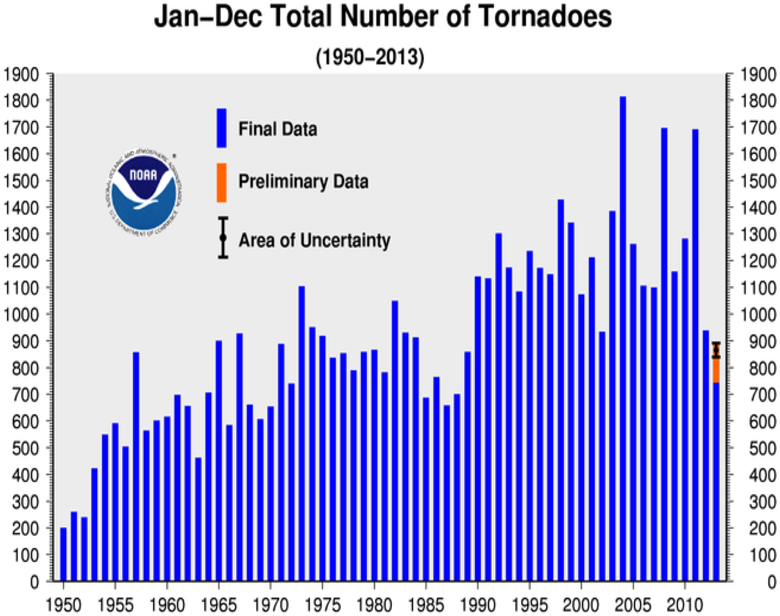 Similar to 2012, tornado activity across the U.S. during 2013 was below average. During 2013, there were 742 confirmed tornadoes during the January–September period, with 149 preliminary tornado reports still pending for October–December according to NOAA's Storm Prediction Center. This gives 2013 a preliminary tornado count of 891. Depending on the final confirmation rate, this could be the slowest tornado year since 1989 when 856 tornados were confirmed. The 1991-2010 annual tornado average is 1,253. Despite the below-average number of annual tornadoes, there were several large and destructive tornadoes and tornado outbreaks that led to significant damage and loss of life. There were 54 tornado-related fatalities and five severe weather and tornado outbreaks that resulted in at least one billion U.S. dollars in damage each.

The year started off with above-average tornado activity in January, when there were 75 confirmed tornadoes, well above the average of 35 for the month. February had a near-average tornado count, while the March tornado count was below average. Tornado activity remained below average during the climatologically most active time of year between April and July. However, several large tornado outbreaks did impact the U.S. during May, including the EF-5 tornado that hit Moore, Oklahoma. May was the deadliest tornado month of the year, with 41 reported tornado-related fatalities. Above-average tornado activity returned in November when a large late-season tornado outbreak hit the Midwest, with over 70 tornadoes confirmed. The monthly average number of November tornadoes is 58. 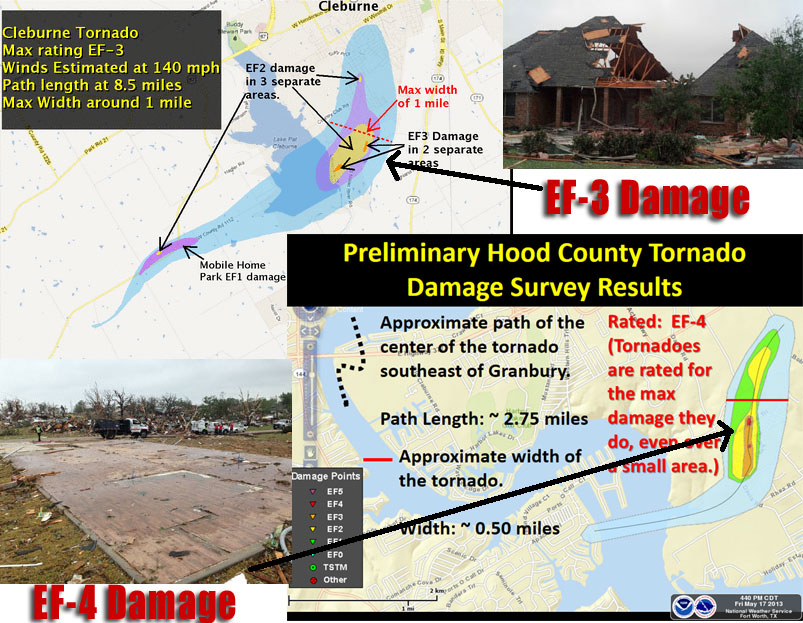 On May 15th, over 18 tornadoes were reported across northern Texas, and one in central Oklahoma, as a cold front moved through the region. The tornado that hit Granby, Texas was rated an EF-4 with winds between 166 and 200 miles per hour and killed 6 people and left over 100 injured. Over 200 homes were destroyed in the town. Nearby in the town of Cleburne, an EF-3 tornado, that was nearly a mile wide, destroyed numerous homes and left 7 people injured. Damage from this tornado was so extensive, a state of emergency was declared. The deadly tornado outbreak came on the heels of a relatively quiet tornado period over the last 12 months in the United States. The last time 6 or more fatalities were reported during a tornado was in April 2012. The Granby tornado was the deadliest tornado for the state of Texas since April 2007.

A massive, deadly, and historic tornado outbreak impacted the Central and Southern Plains between May 18th-20th. The severe weather was associated with a cut-off low pressure system and strong cold front that moved from the Colorado Front Range into the Great Plains. Ahead of the front, warm, moist, and unstable conditions filtered into the region. The front provided the necessary wind shear in the lower atmosphere for the storms that did spawn to begin rotating, with several of these super cell thunderstorms producing devastating tornadoes. On the 18th, there were 16 tornadoes reported across Kansas and Nebraska. On the 19th, there were 29 preliminary tornado reports in six states from Oklahoma to Illinois. An EF-2 tornado hit Harper County, Kansas, to the southwest of Wichita. At least 6 tornadoes were confirmed in central Oklahoma, where an EF-4 hit near Shawnee, an EF-3 hit near Luther, and an EF-2 hit near Prague. The EF-4 tornado caused at least two fatalities in Pottawatomie County, Oklahoma. 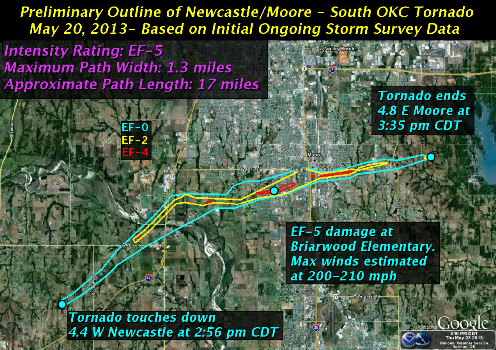 On May 20th, there were 32 tornadoes reported, mostly in Oklahoma, Arkansas, and Missouri. The most devastating tornado of the three-day outbreak hit Moore, Oklahoma. The EF-5 tornado tracked 17 miles through the towns of Newcastle and Moore, and had a maximum width of 1.3 miles. Maximum winds were estimated at over 200 miles per hour. The tornado resulted in at least 2 fatalities. Thousands of homes, as well as businesses, hospitals, and schools were completely destroyed. Loss of life might have been much higher, but the 15-minute-plus lead time of the tornado warnings issued by the National Weather Service allowed people to attempt to prepare for the storm. This was the first observed EF-5 tornado in the U.S. since May 24, 2011, and only the 59th confirmed EF-5 (or F-5 prior to 2007) tornado in the 1950-present record. Damage from the storm is estimated to be in the billions of U.S. dollars and will rival the costliest tornado in U.S. history which hit Joplin, Missouri in May 2011. Moore was devastated by a tornado 14 years ago, when an F-5 tornado hit the town in May 1999 killing 36 people. The 1999 tornado caused over 1.1 billion U.S. dollars in damage. Additional information on the Moore, Oklahoma tornado is available in our supplemental information page, including 3-D animations of the storm, and through the National Weather Service. 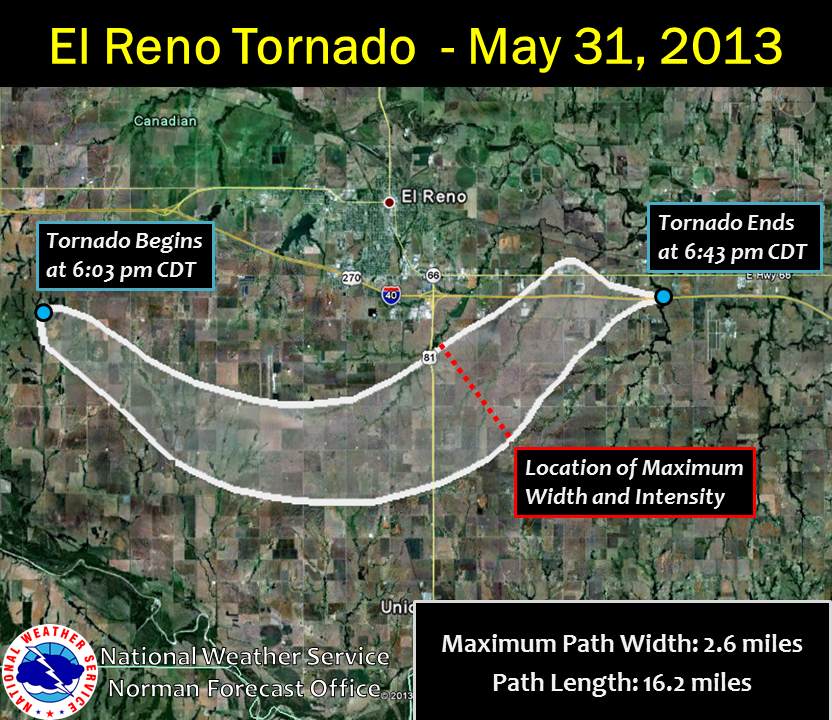 On May 31st, a cold front moving through the Central and Southern Plains spawned severe weather from Oklahoma to Indiana. There were 30 preliminary reports of tornadoes in eight states. The hardest hit areas included the Oklahoma City Metro area, the St. Louis metro area, and locations north of Tulsa, Oklahoma. In the Oklahoma City area, three tornadoes were confirmed, including an EF-0 and EF-1 which hit part of Moore, Oklahoma. The deadliest tornado of the outbreak hit just west of Oklahoma City, in the town of El Reno. The EF-3 tornado was on the ground for 16.2 miles and had an estimated path width of 2.6 miles. The 2.6 miles width surpasses the Hallam, Nebraska tornado of May 2004 as the widest tornado on record for the United States and subsequently the world. The Hallam EF-4 tornado was 2.5 miles wide. Highways in the area had severe traffic congestion due to the rush hour commute, creating a very dangerous scenario. The tornado resulted in at least nine fatalities, seven of which were in automobiles. The fatality count might have been higher, but the tornado hit a relatively sparsely populated area on the south side of El Reno. 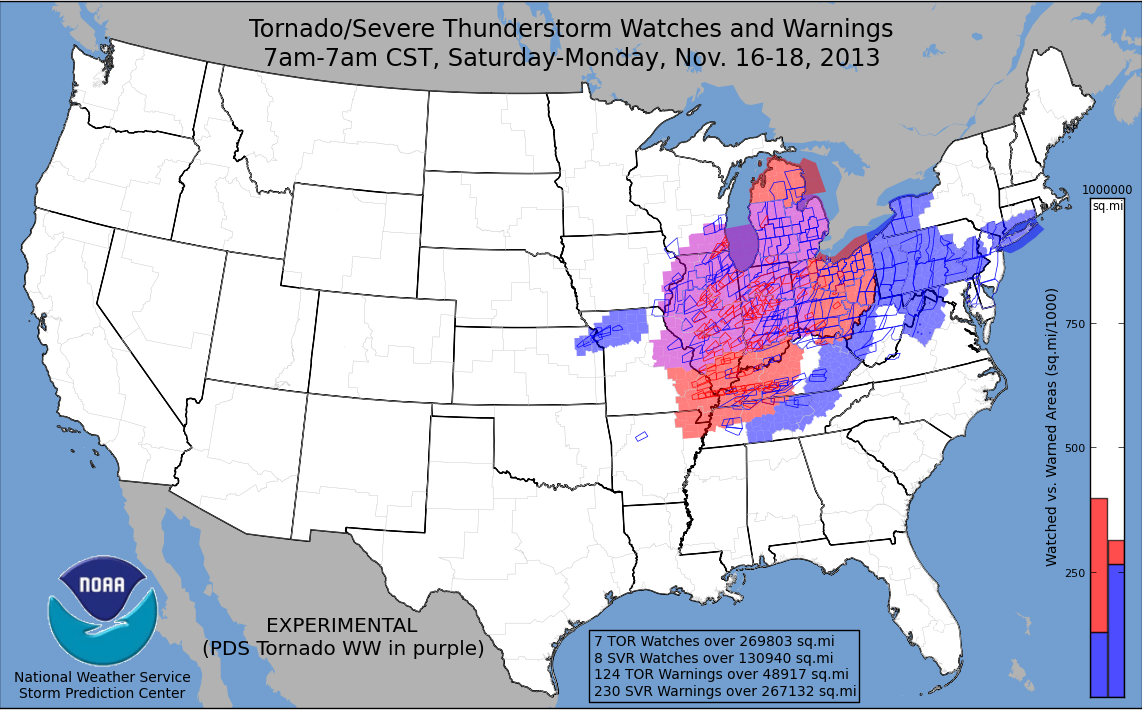 On November 17th, a powerful low pressure system moving through the Plains transported warm and moist air northward into the Midwest and Ohio River Valley. Temperatures reached into the 70s (degrees F) ahead of the associated cold front, creating unstable conditions across the region. There were over 70 tornadoes reported during the day. Severe weather, including strong winds and large hail were also reported across portions of the Northeast during the event. An unusual aspect of this outbreak was how far north it occurred during November. Typically this time of year, conditions are unfavorable for tornado outbreaks in the Midwest, with the Southeast and Gulf Coast states experiencing the most November tornadoes. In Indiana, there 28 confirmed tornadoes, marking the third busiest tornado day on record for the state, and the largest November outbreak in state history. In Illinois, 25 tornadoes were confirmed, the fourth most for any day on record and the largest November outbreak to impact the state. Fourteen of the tornadoes to hit Illinois were rated EF-2 or stronger, the second most for any day in the state, behind December 18, 1957. There were six reported fatalities during the outbreak, associated with three different tornadoes, all in Illinois. An EF-4 tornado hit near New Minden, Illinois and killed two people and injured another two. An EF-3 tornado, which formed north of Paducah, Kentucky, was on the ground for 42 miles, with a maximum path width of 500 yards and winds of 145 mph. This tornado killed 3 people in Massac County, Illinois. The third fatal tornado occurred near Washington, Illinois. The EF-4 tornado had winds of 190 mph, a path length of 46.2 miles, and a maximum width of over 800 yards. This tornado was responsible for one fatality and over 120 injuries.