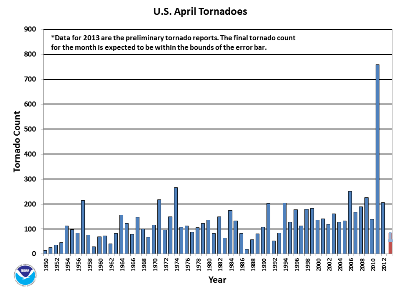 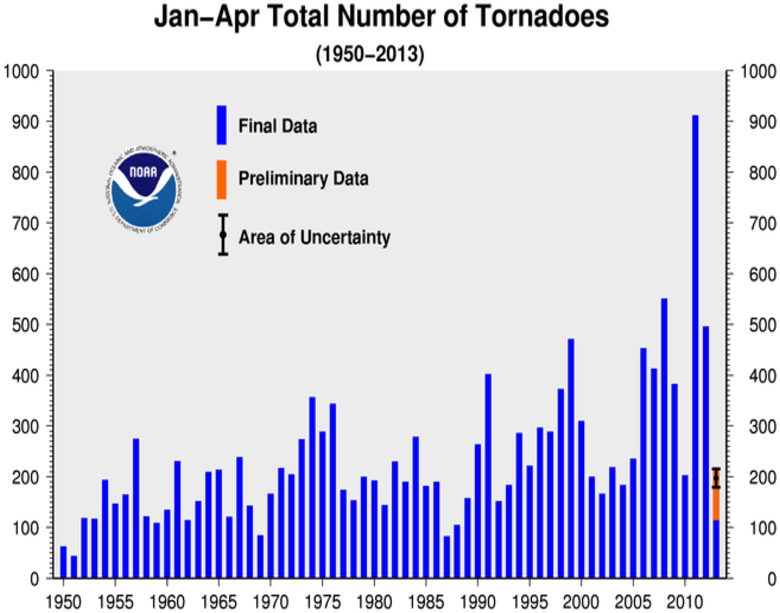 According to data from the Storm Prediction Center, during April, there were 83 preliminary tornado reports. This is well below the 1991-2010 average of 155 for the month, and marked the slowest April in terms of tornadoes since 1992. The last April with fewer than 100 tornadoes was in 1993. April is typically one of the more active tornado months, with annual tornado activity peaking in May and June. The below-average tornado activity during March and April has contributed to a below-average tornado count for the year-to-date period. For January-April, 114 tornadoes have been confirmed with 101 tornado reports still pending for March and April. The 1991-2010 average tornado count for January-April is 300. 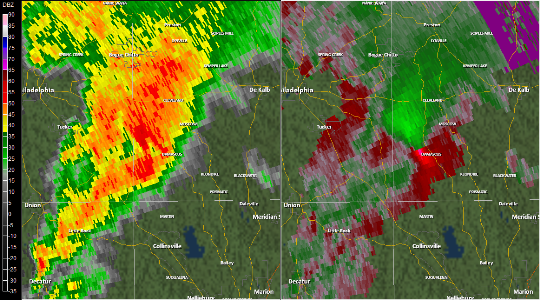 On April 11th, a storm system moving through the Southeast spawned several tornadoes in Alabama, Georgia, Louisiana, and Mississippi. The most destructive tornado from the outbreak, an EF-3, tracked 68 miles across Kemper and Noxubee Counties in Mississippi and ended in Pickens County, Alabama. The tornado had estimated maximum winds of 145 mph and a path width of three-quarters of a mile. In the wake of the tornado, thousands of trees were uprooted and numerous homes and businesses were destroyed. There was one fatality reported in Kemper County and at least nine additional injuries.

NOAA National Centers for Environmental Information, State of the Climate: Tornadoes for April 2013, published online May 2013, retrieved on September 21, 2020 from https://www.ncdc.noaa.gov/sotc/tornadoes/201304.