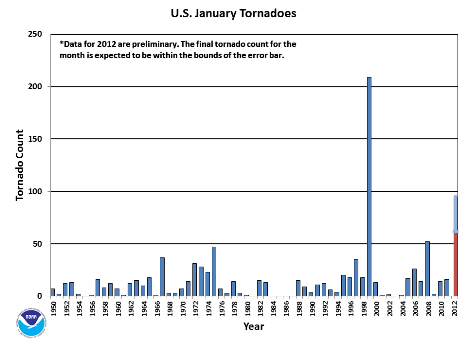 According to data from the Storm Prediction Center, the count of preliminary tornado reports during January 2012 — 95 — was much-above the 1991-2010 average of 35. Most of the tornadoes occurred in two outbreaks, one across the Ohio Valley, and the other in the Mid-South. Depending on the confirmation rate of the monthly tornado reports, January 2012 will likely rank as the second busiest January on record. January tornadoes are unusual, but are certainly not unheard of, and there is high variability in tornado occurrences during the cool season, especially in January. Several Januarys have no reported tornadoes, while January 1999 had over 100 confirmed tornadoes. 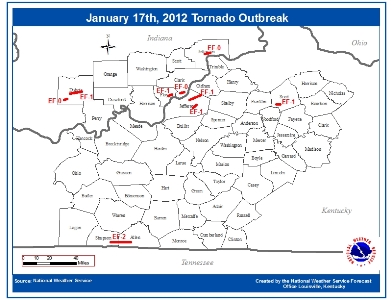 On the morning of January 17th a strong squall line moved through southern Indiana and into central Kentucky along a cold front. Along the main line of convection, several strong storms formed, spawning numerous tornadoes. Nine tornadoes were confirmed across Indiana and Kentucky, with four tornadoes striking just outside the densely populated city of Louisville. One tornado confirmed in Kentucky was rated an EF-2. Tornadoes of this magnitude are rare in Kentucky during January. Fortunately, there were no tornado-related fatalities from this outbreak. 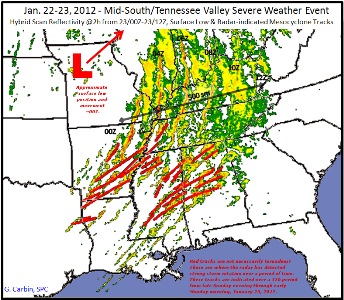 A large tornado outbreak affected the Mid-South on January 22nd, with tornadoes impacting Arkansas, Mississippi, Alabama, and Tennessee. During the outbreak, there were 41 preliminary tornado reports and at least two tornado-related fatalities. The tornadoes were spawned along a cold front, which moved through the region. Ahead of the system, very warm, moist and unstable conditions were observed. As the storm system moved eastward, it spawned several powerful tornadoes across central Alabama, where the first tornado-related fatalities of 2012 were reported. An EF-3 tornado near Center Point, Alabama was responsible for one of the fatalities, and over 100 injuries. The last fatal tornado in Alabama in January was in 2006. EF-3 or stronger tornadoes are rare across Alabama during January. Only 10 such tornadoes have been confirmed in Alabama since reliable record keeping began in 1950.