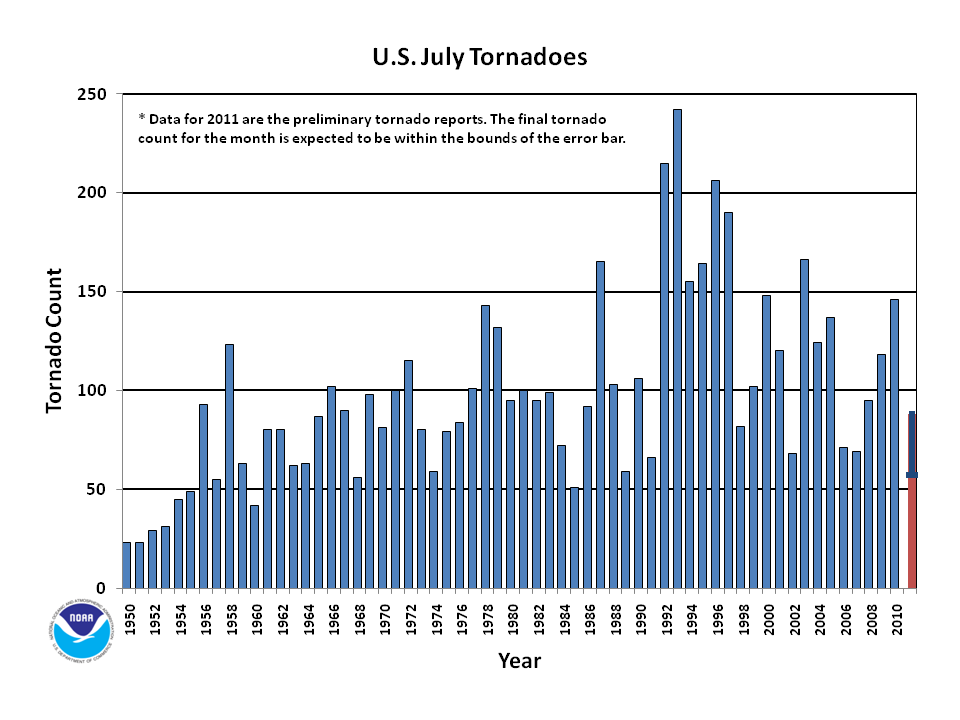 According to preliminary data from the Storm Prediction Center, July continued the below-average tornado activity which began in June. This was in stark contrast to the extreme tornado activity which occurred during April and May across the country. During July 2011, there were 88 preliminary tornado reports across the country, compared to the 1981-2010 average of 242 tornadoes. This brings the year-to-date number of preliminary tornado reports to 1,540 — currently ranking 2011 as the third most active tornado year since modern records began in 1950.

Most of the tornadic activity occurred across the Northern Plains. Fifty-two of the tornado reports during the month occurred across North Dakota (41) and Minnesota (11). A large dome of high pressure persisted for most of the month across the central and southern Plains as well as the Eastern Seaboard. This caused storm systems to travel north of the high pressure bringing the active severe weather pattern to the northern United States. Particularly noteworthy was the number of preliminary tornado reports for North Dakota. The state averages 29 tornadoes annually and only nine tornadoes for the month of July. The July record for number of tornadoes for the state occurred in July 2001 when there were 33 confirmed tornadoes. The confirmed number of tornadoes for North Dakota will likely be less than the preliminary report of 41, but will approach the July record.

NOAA National Centers for Environmental Information, State of the Climate: Tornadoes for July 2011, published online August 2011, retrieved on May 18, 2021 from https://www.ncdc.noaa.gov/sotc/tornadoes/201107.