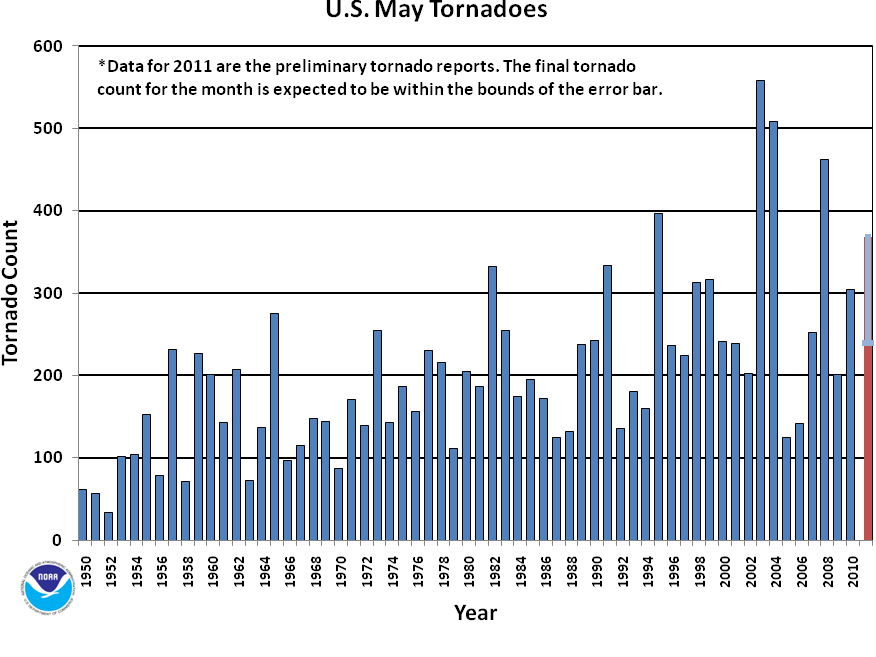 May 2011 brought a continuation of active severe weather across the U.S., which began in April. May is climatologically the most active tornado month of the year, but the total number of tornado reports and tornado-related fatalities was significantly less than April. During May there were 355 preliminary tornado reports across the country, which is above the 1981-2010 average of 253. There were 156 tornado related fatalities during May, with 138 of the fatalities due to the EF-5 tornado which ripped through Joplin, Missouri. It should be noted that the numbers reported here are preliminary and are subject to change.

For the year-to-date period (through May 31st), there have been 1,409 preliminary tornado reports, which ranks as the highest on record. The previous record for January–May tornadoes was in 2008, when 1,224 tornadoes occurred during the period. There have been 525 tornado related fatalities during the same period, which currently ties as the most annual fatalities in the modern period of record (since 1950) with 1953. In the entire history of tornado fatalities in the U.S. (back to 1875), 2011 currently ranks as the seventh deadliest year on record. 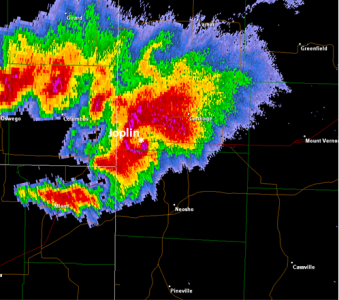 On May 22nd a severe weather outbreak occurred across the central Plains and the Midwestern United States, and several of the storms generated tornadoes across the region. The most destructive of the storms tracked from southeastern Kansas into southwestern Missouri during the late afternoon. This supercell thunderstorm spawned a strong tornado over Joplin, Missouri resulting in devastating damage. The National Weather Service rated the tornado an EF-5, with winds in excess of 200 mph (320 km/hr). The tornado was on the ground for approximately 6 miles (9.7 km) and had a maximum width of 3/4 mile (1.2 km). The tornado struck the heavily populated southern part of Joplin, resulting in at least 138 deaths and over 1,000 injuries. Damages from the tornado are currently estimated at between one and three billion U.S. dollars. The tornado surpassed the June 1953 tornado which killed 116 people in Flint, Michigan as the deadliest single tornado to strike the U.S. since modern tornado record keeping began in 1950. In the entire history of tornado fatalities across the U.S. (back to 1875), the Joplin tornado currently ranks as the seventh deadliest tornado on record. The deadliest tornado on record for the U.S. was the 'Tri-State Tornado' which killed 695 people across Missouri, Illinois, and Indiana in March 1925.

NOAA National Centers for Environmental Information, State of the Climate: Tornadoes for May 2011, published online June 2011, retrieved on April 16, 2021 from https://www.ncdc.noaa.gov/sotc/tornadoes/201105.