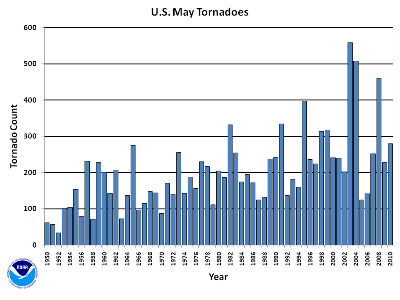 In terms of climatology, May tends to be one of the most active tornado months annually. This May has been the most active month of 2010 to date with 290 preliminary tornado reports across the United States, which is slightly above the 1980-2009 average of 250 May tornadoes. An active weather pattern brought widespread tornado outbreaks to the typically active Plains, the front range of the Rockies, and parts of the Southeast. Two tornadoes were also reported in Washington state, which only receives two tornadoes annually on average. During the month, there were six separate tornado outbreaks that produced over twenty tornado reports each, with two separate events associated with over 40 tornado reports. Six tornado related fatalities were reported in May, associated with four different tornadoes. 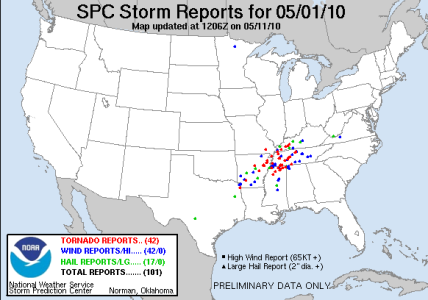 A strong weather system brought a significant tornado outbreak to the Southeast on May 1st lasting into the early morning hours of the 2nd. The storm system was a continuation of a tornado outbreak which occurred on April 30th. Forty-two tornadoes were reported from western Kentucky to eastern Texas. The system also brought very heavy rainfall (in excess of 15 inches [33.1 cm]) to western Tennessee, where flooding was widespread. The strongest tornado of the outbreak was ranked as an EF-3 with a track length of 27.7 miles (44.6 km) and a maximum width of one-half mile (0.8 km). Maximum winds were estimated at 145 miles per hour (234 km/hr). Three fatalities and one serious injury were blamed on this tornado, and it was the deadliest tornado of May 2010. According to the National Weather Service assessment, over thirty homes were destroyed along the tornado’s path. 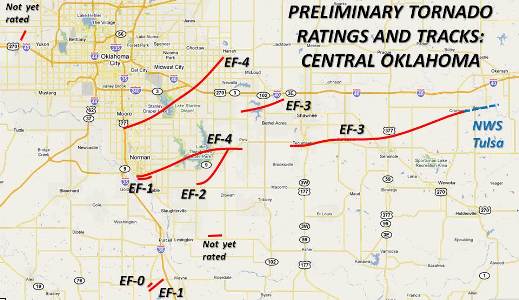 The second major outbreak of May occurred on the 10th when 42 tornadoes were reported in Oklahoma and Kansas. Very large hail alos occurred during the outbreak, measuring up to the size of softballs (4.5 inches [11.4 cm]). During the outbreak two people were killed and over 100 injured. Two of the tornadoes were rated EF-4, both of which affected the Oklahoma City Metro area. One of the EF-4 tornadoes was visible from the National Weather Center in Norman, OK, which houses the NOAA Storm Prediction Center (SPC). The SPC is reponsible for providing tornado and severe weather forecasts for the United States. Several other tornadoes in the region were verified to be at least EF-3s. The strong EF-4 tornado affecting Norman was thoroughly measured by a NOAA-funded field project VORTEX2. The goal of the project is to better understand how and why tornadoes form and to improve forecast lead times which will protect lives in the future.

NOAA National Centers for Environmental Information, State of the Climate: Tornadoes for May 2010, published online June 2010, retrieved on May 18, 2021 from https://www.ncdc.noaa.gov/sotc/tornadoes/201005.