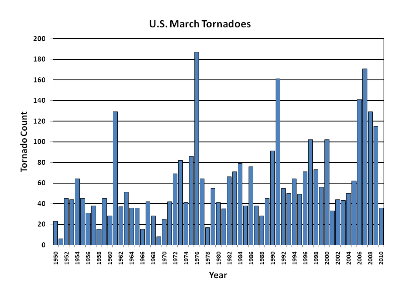 As a preliminary count, the U.S. experienced 36 tornadoes during the month of March — the typical beginning of the annual tornado season. Two significant outbreaks occurred across the country on March 10th and 28th, accounting for 22 of the month’s tornadoes. Thirty-four of the tornadoes affected the southeastern U.S., while only two impacted the typically active ‘Tornado-Alley’. According to data from the Storm Prediction Center (SPC), this March was very quiet compared to climatology. March 2010 tied as the 14th quietest March since reliable records began in 1950 and the third quietest since 1980.

The tornado outbreak occurring on March 10th brought seven tornadoes to Arkansas, Mississippi, and Louisiana. This outbreak was associated with the first tornado related fatality of 2010. A man in Arkansas perished due to injuries suffered during an EF–2 tornado (Source: CNN). The tornadoes were associated with a strong low pressure system which pulled warm moist air northward from the Gulf of Mexico, destabilizing the atmosphere. Dozens of homes were damaged and nearly 2,000 were without power (Source: AP). This was the first significant tornado outbreak since January 20th (49 days), indicating a slow start to the 2010 tornado year. 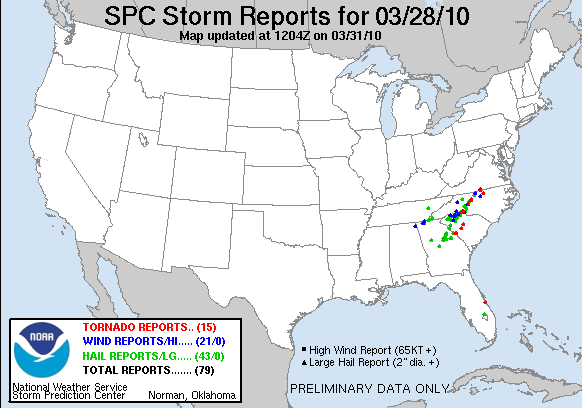 The March 28th outbreak was the largest of the month, and second largest of 2010 to–date, with 15 tornado reports in Florida, South Carolina, North Carolina, and Virginia. Fourteen of the tornadoes were spotted along the busy I–85 corridor through the Carolinas, including the heavily populated Charlotte metro area. The strongest of the tornadoes impacted the town of High Point, North Carolina. The EF–3 tornado had winds up to 138 mph (222 km/hr) and a path width of 300 yards. For the entire outbreak, damage was reported to hundreds of homes and business, with only a few injuries and no fatalities (Source: CNN). The National Weather Service credits their warnings and the public's heeding of the warnings as the reason for so few injuries.