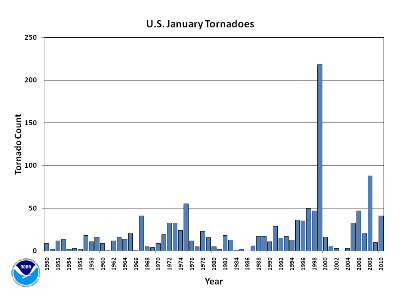 The U.S. experienced 41 tornadoes during January, according to preliminary reports. Forty of the 41 tornadoes were reported over the course of five days between the 18th and the 22nd, with all tornadoes occurring in the southeastern and western regions of the country. According to data from the Storm Prediction Center, this January ties as the seventh busiest January in terms of tornadoes since 1950. January 1967 also had 41 tornado reports. There were no fatalities for the month of January that were directly related to a tornado. 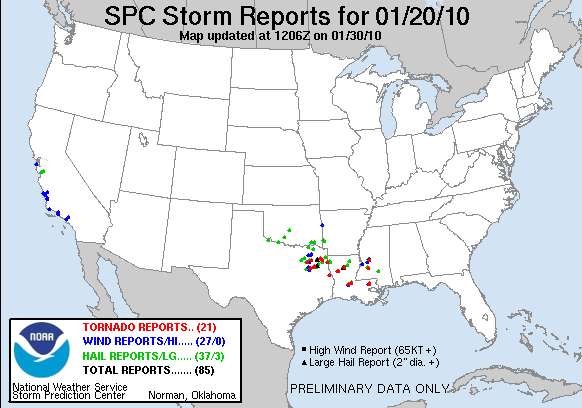 A significant tornado outbreak occurred across the Gulf Coast states on January 20th. According to the National Weather Service, a tornado that occurred during the outbreak was the strongest to affect the Arklatex region (southern Arkansas, northern Louisiana, eastern Texas) in at least two decades. The EF-3 tornado caused widespread damage, with winds of up to 160 mph (258 km/hr), a path length of 15.5 miles (25 km), and a width of 0.75 miles (1.2 km). The storm moved from Texas into Louisiana, causing injuries and leaving behind significant damage to buildings (Source: AFP). The outbreak as a whole led to 21 tornado reports, 35 severe hail reports, and 13 wind damage reports.

The same storm complex that caused the January 20th outbreak, also lead to a smaller outbreak with four tornado reports on the 21st, further east into Alabama, Tennessee, Georgia, and Florida. The strongest tornado of the outbreak, an EF-2, occurred near Huntsville, Alabama during early evening. There were reports of three injuries as a direct result of the tornado (Source: NWS). Multiple homes had substantial roof damage from falling trees and tornado winds.

The state of California had an extremely active tornado month in terms of what is typically experienced across the state. Several large and intense extra-tropical cyclones made landfall along the west coast during the month, spawning seven preliminary tornado reports. This count ties for sixth busiest month of all months, since 1950 (tied: November 1982, February 1998, and May 1998). If the seven tornado reports are confirmed, this will make the most active January on record for the state. The state of California averages six tornadoes annually. Five of the tornadoes occurred along the densely populated area of coastal Southern California, one occurred near Fresno in the San Joaquin Valley, and another occurred in the desert near the Arizona border which caused the most damage, blowing over big rigs on Interstate 10.