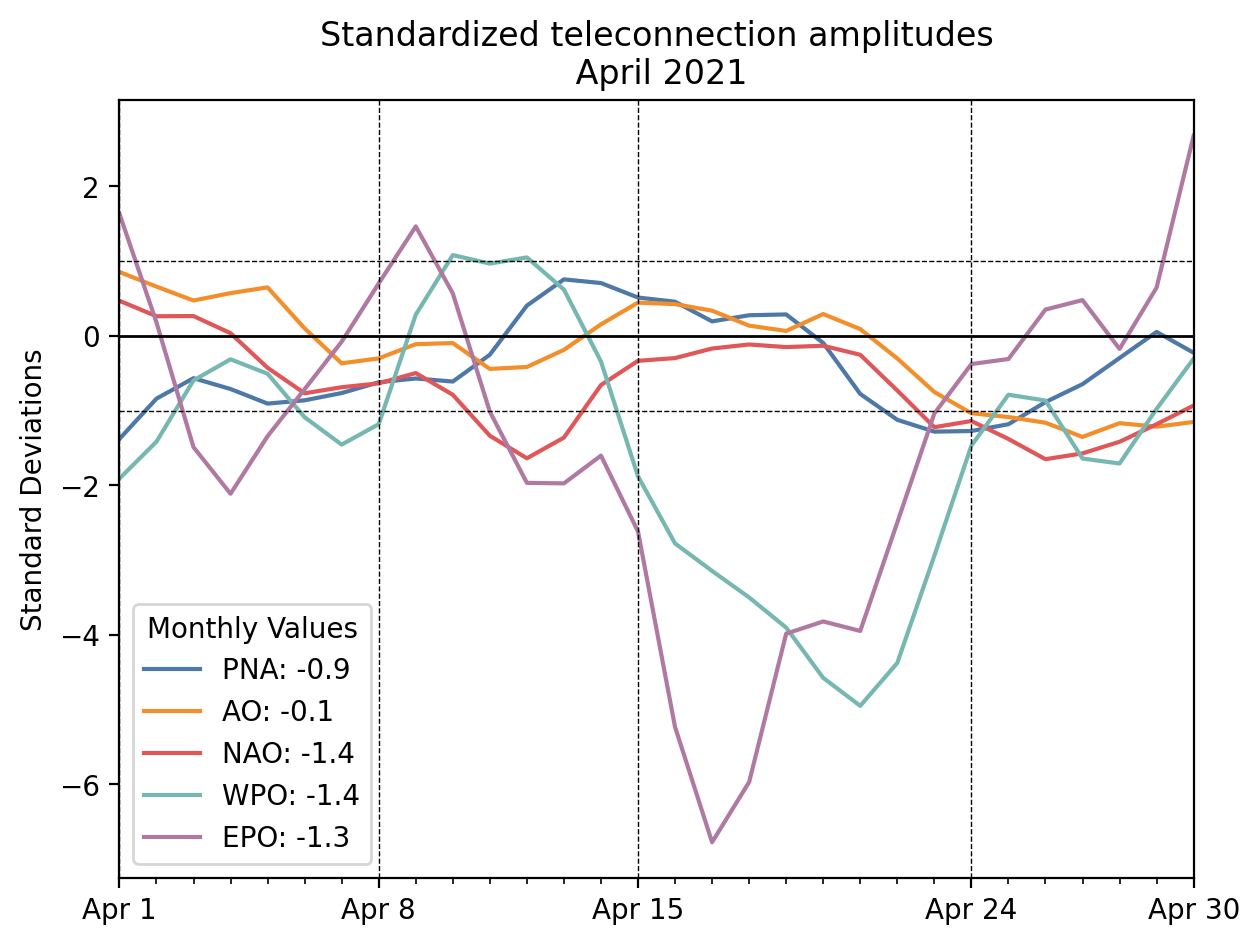 The primary circulation features during April were strong ridges in the far northern Pacific and Atlantic. The Pacific ridge was associated with strongly negative phases of the East Pacific Oscillation (EPO) and the West Pacific Oscillation. The Atlantic ridge was related to a negative North Atlantic Oscillation (NAO) although that ridge was shifted somewhat southward from the canonical negative NAO. Both ridges led to blocking patterns that weakened the jet stream and made for more persistent weather patterns.

The Pacific ridge peaked during April 15-23 when it led to some of the warmest early spring temperatures for Alaska. The southeastward extension of that ridge along the West Coast throughout April also maintained the warm and dry conditions over the Southwest.

Most of the country was dry for the bulk of April under the influence of the Pacific ridge. However, the Great Lakes experienced significant precipitation during April 8-14 with a slow-moving extratropical cyclone. The southern tier of the country experienced enhanced storminess with an active subtropical jet during April 24-30. 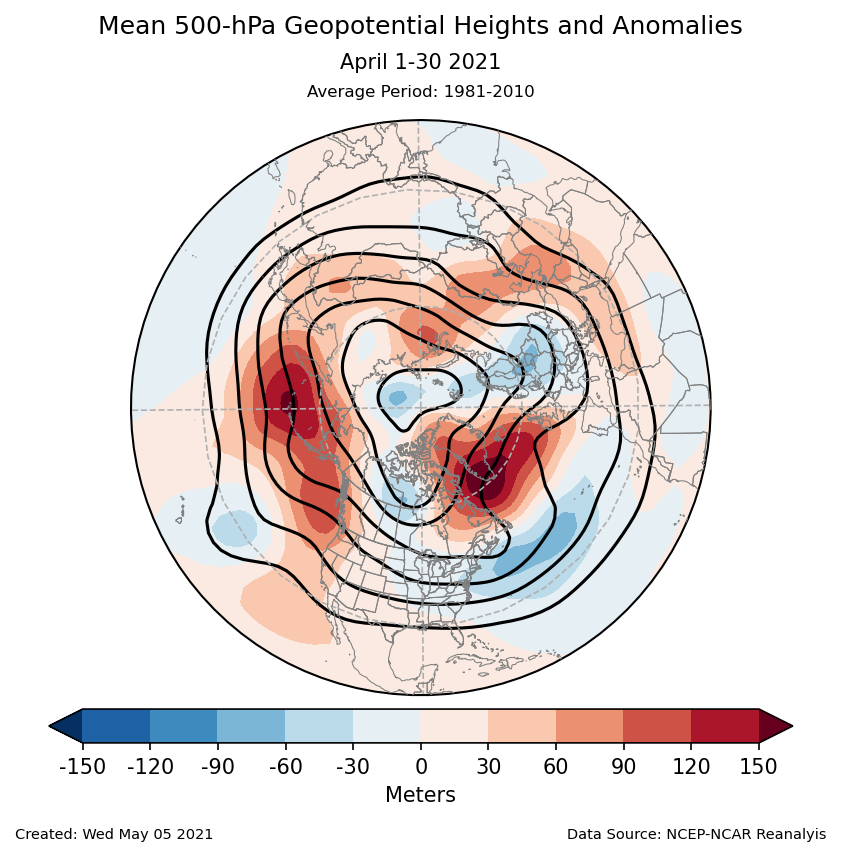 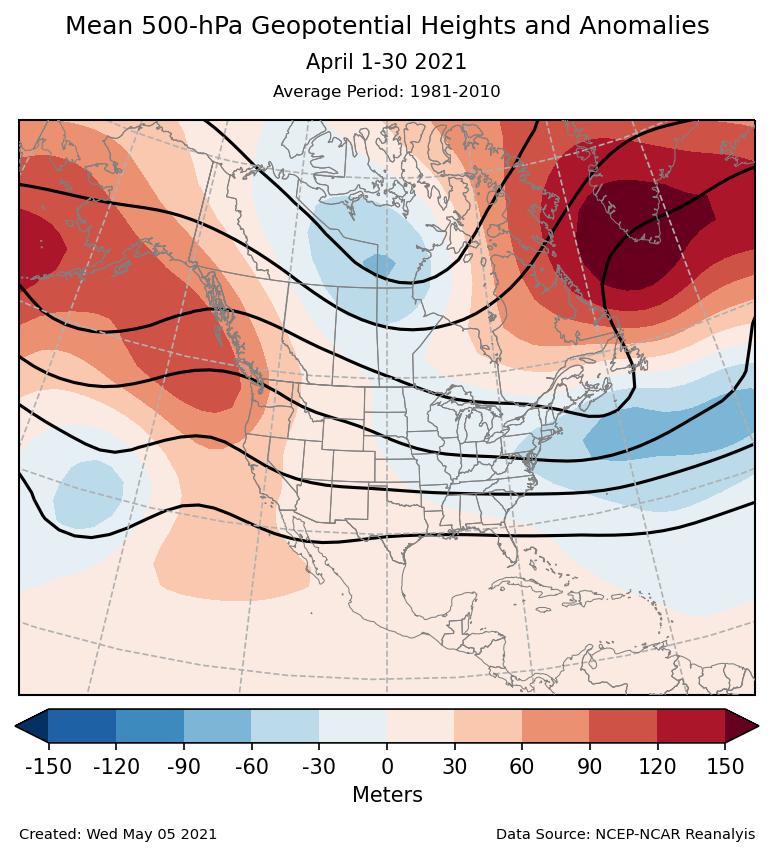 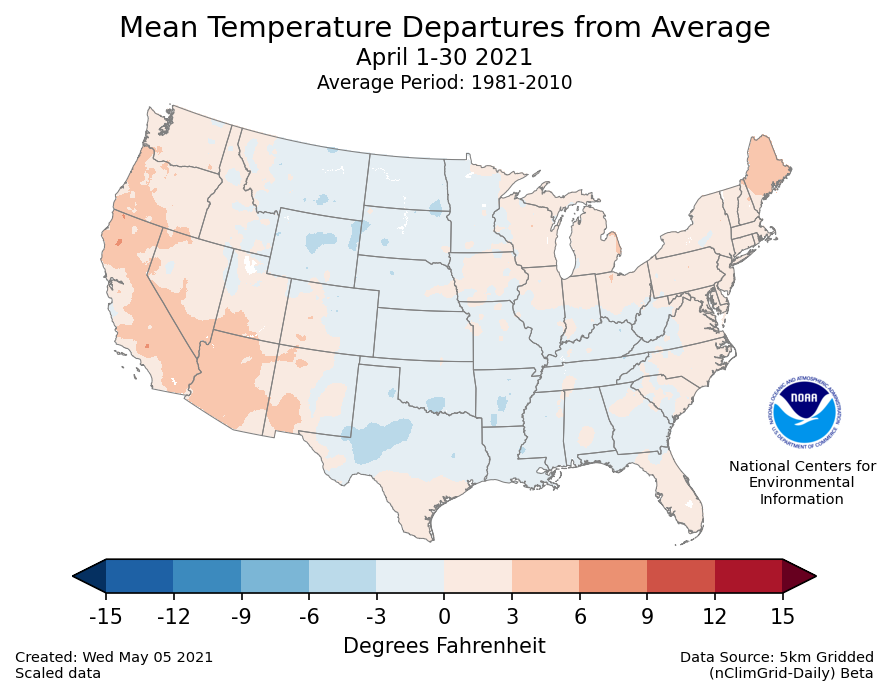 Temperature anomalies (departure from normal) for the CONUS for April 2021 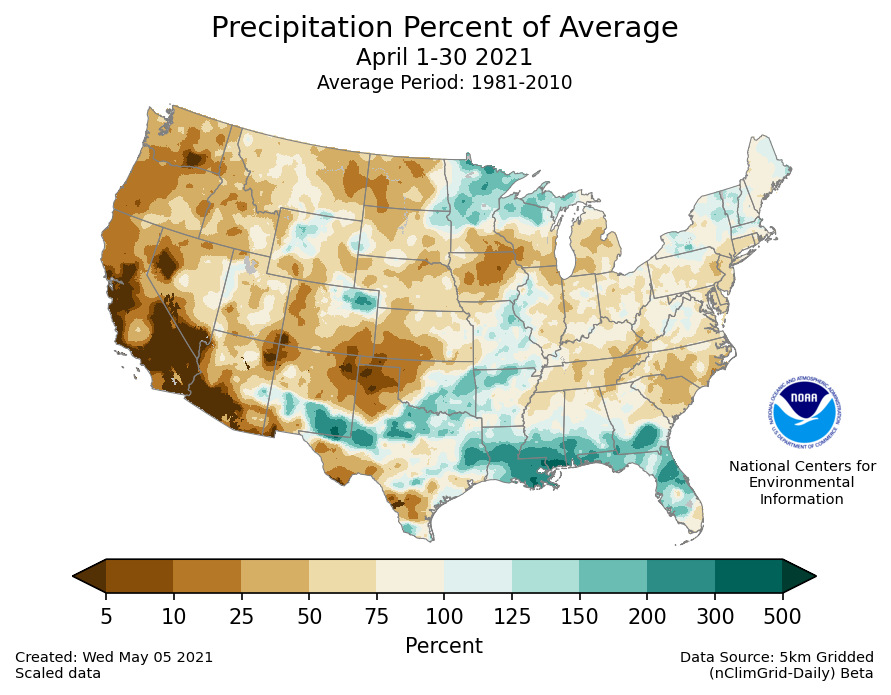 Precipitation anomalies (percent of normal) for the CONUS for April 2021 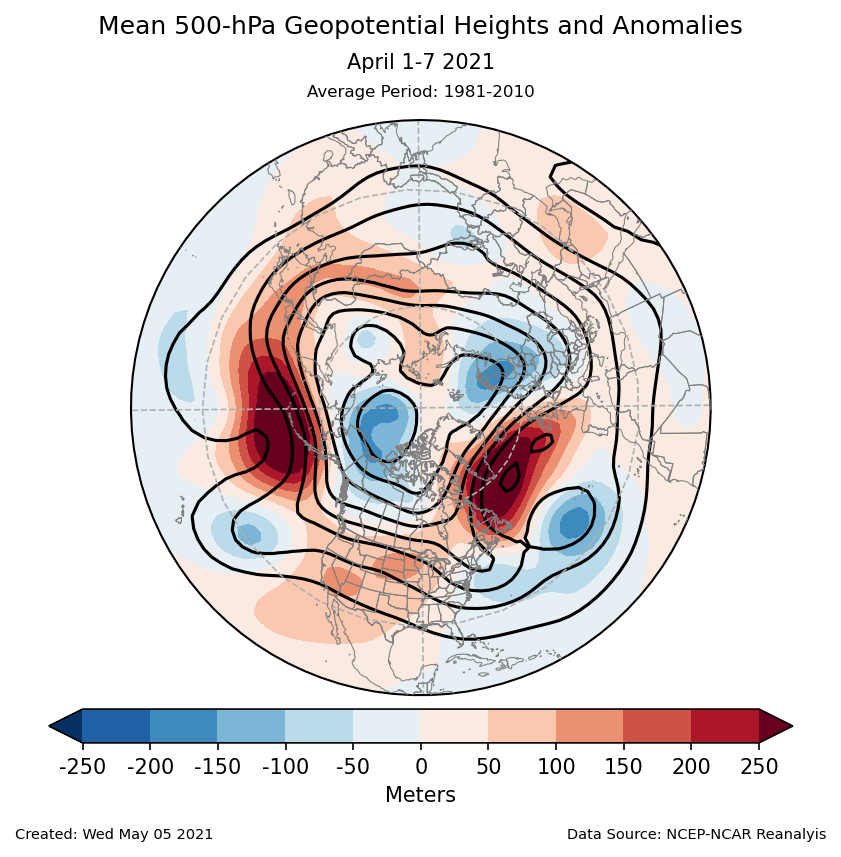 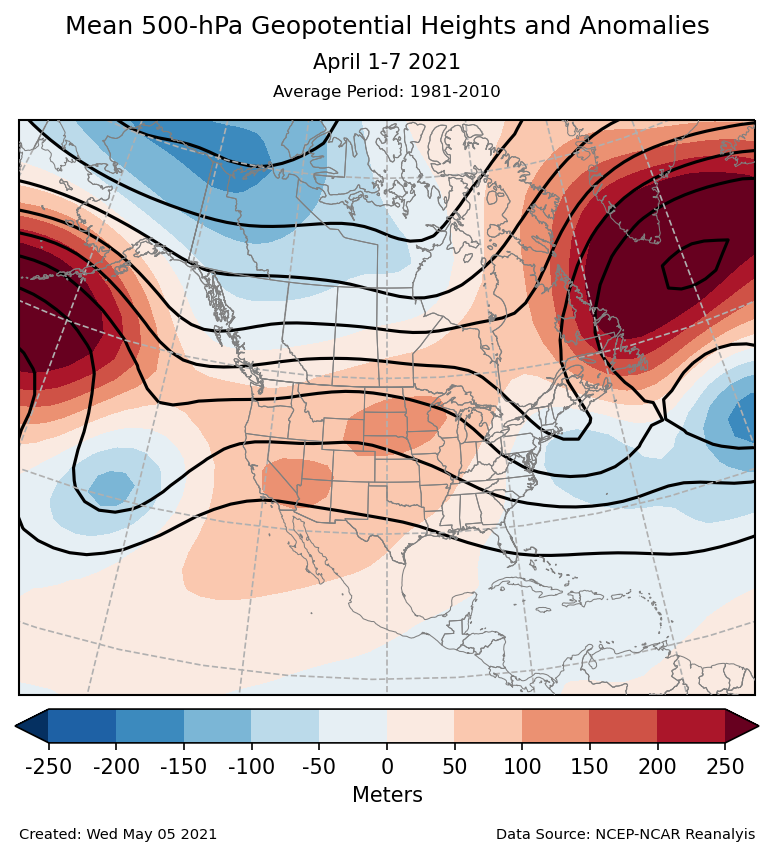 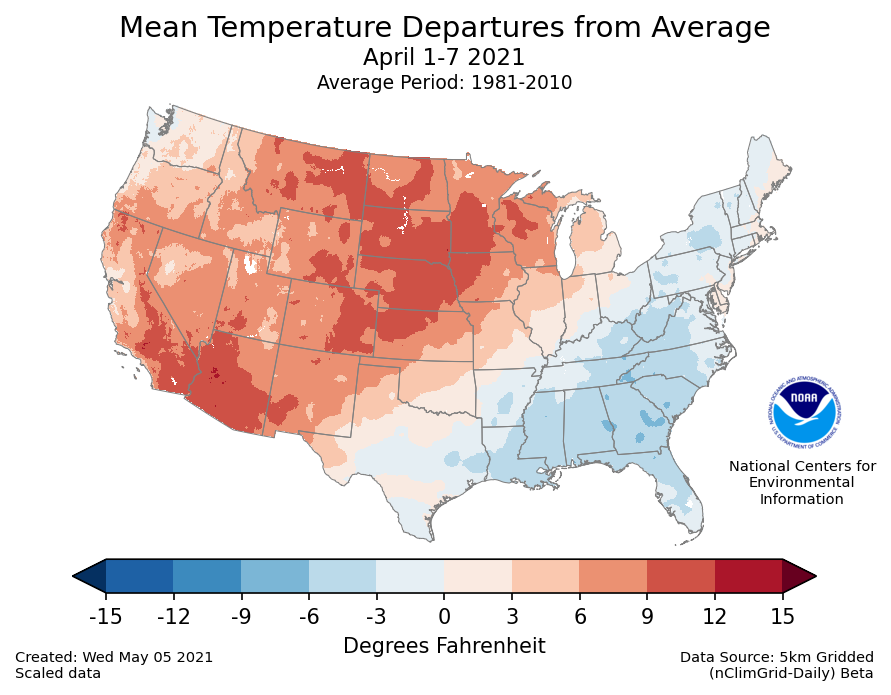 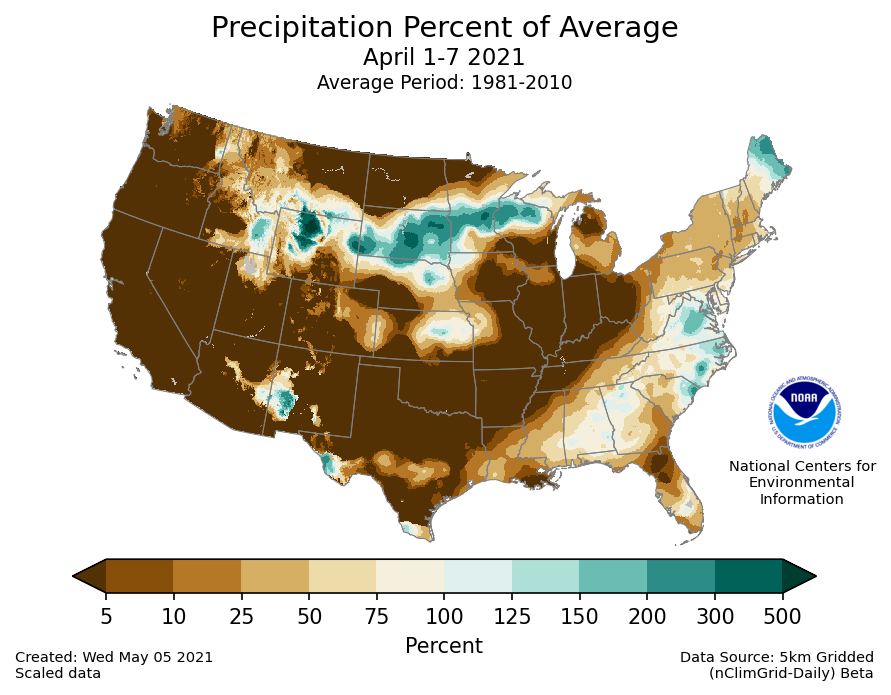 April began with a broad ridge extending from the Southwest to the Great Lakes. Strong ridges over the North Pacific and North Atlantic created blocking patterns that kept the North America ridge in place. The ridge was associated with above-normal temperatures across the western U.S. and the Northern Plains. It also suppressed precipitation across the country. A trough over the central Atlantic extended westward to bring cooler temperatures along the East Coast. Towards the end of the week, a strong cold front began to weaken the warm anomalies over the western U.S. and brought some precipitation to the Northern Plains. 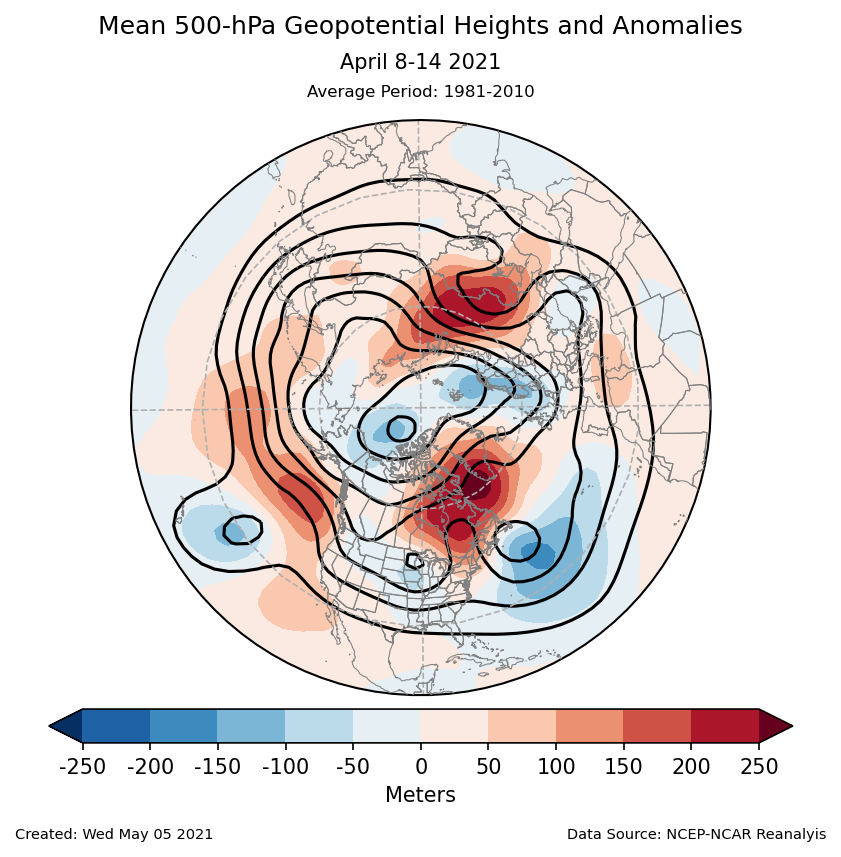 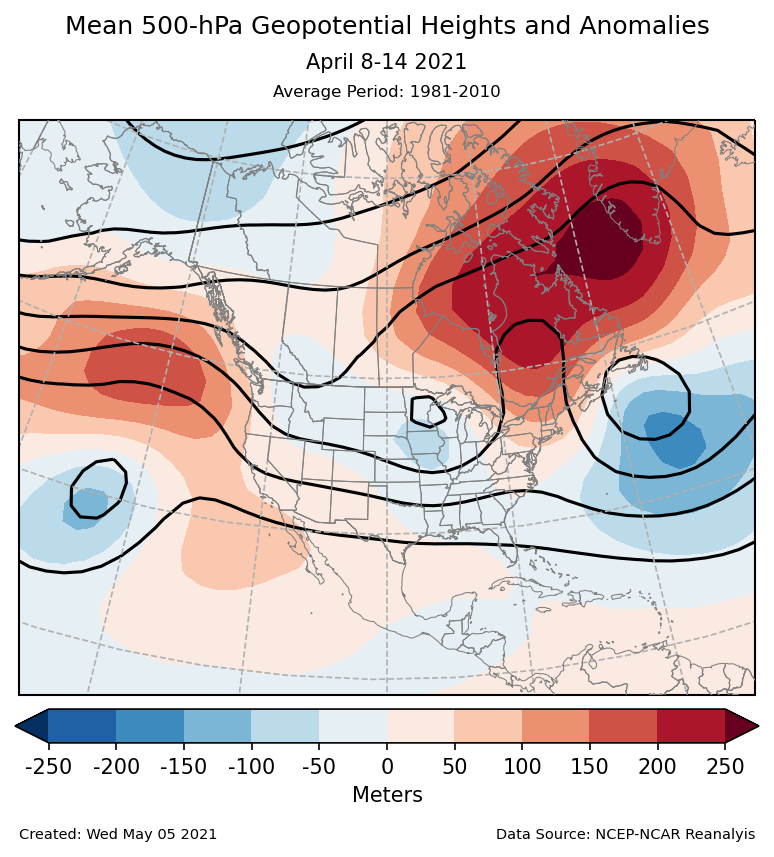 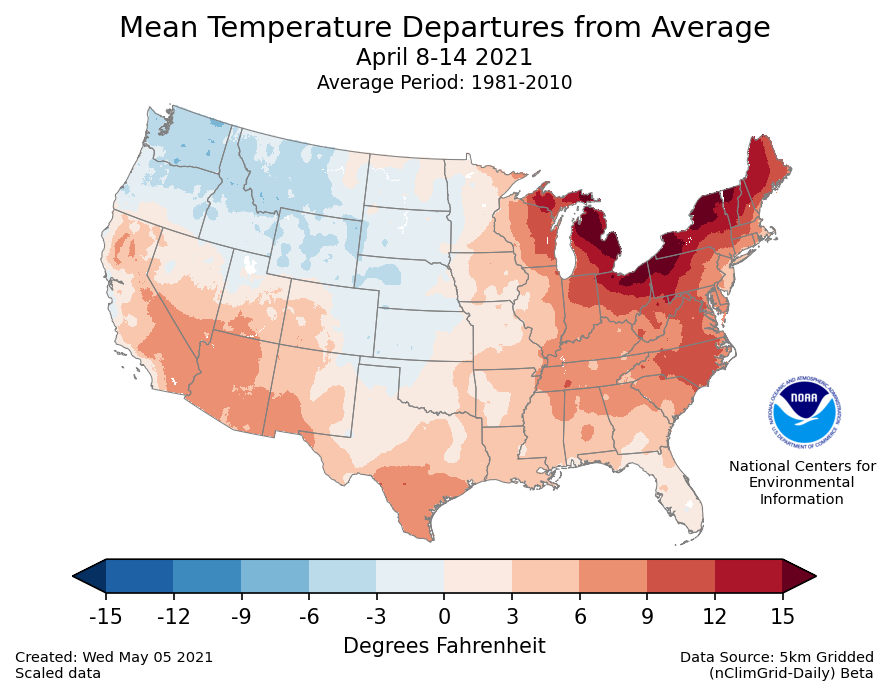 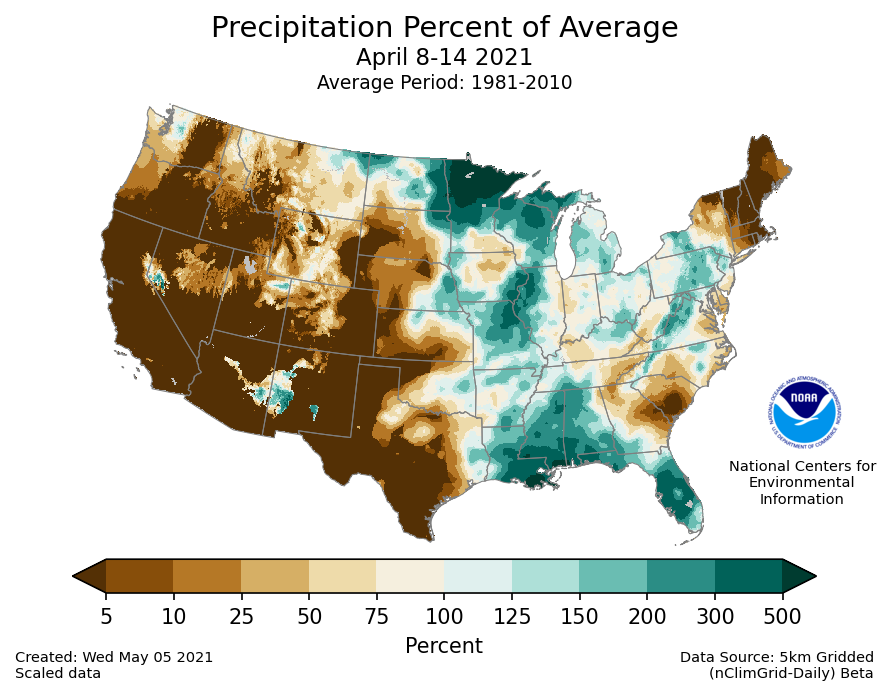 The blocking ridges over the North Pacific and North Atlantic weakened during the second week of April. This allowed a series of shortwave troughs to dig southward from the Beaufort Sea to the central U.S. behind the cold front from the end of the previous week. The ridge that had dominated the country shifted towards the northeast. These shifts in the pattern brought cool temperatures to the northwestern U.S. while the Southwest and Northeast were warmer than normal. A slow-moving extratropical cyclone centered near the Great Lakes brought significant precipitation to the region. 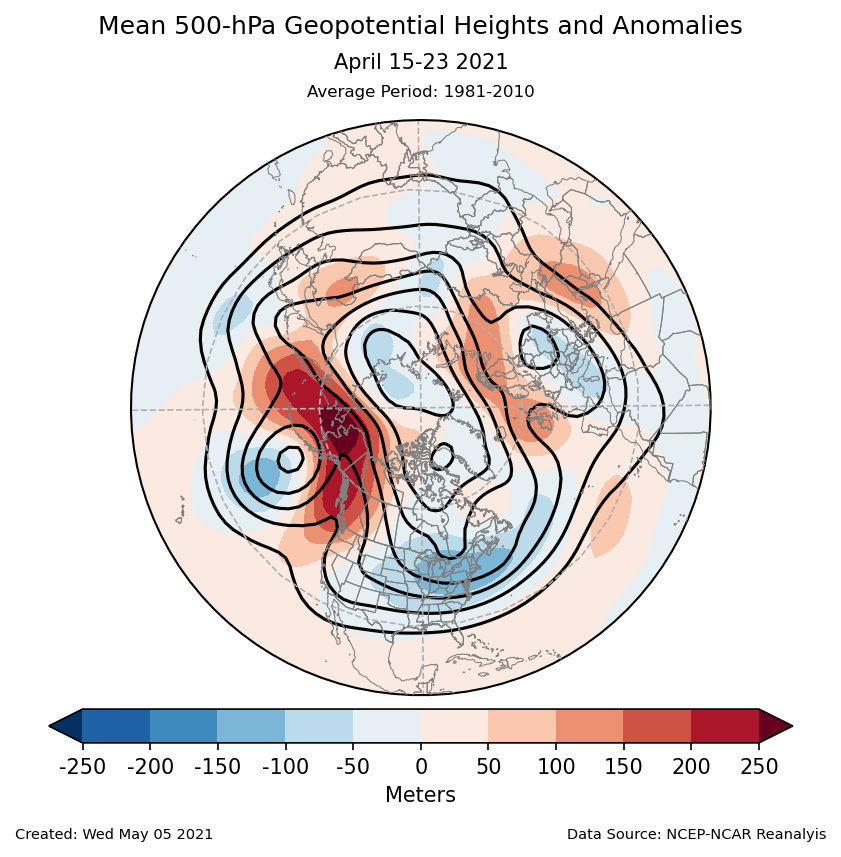 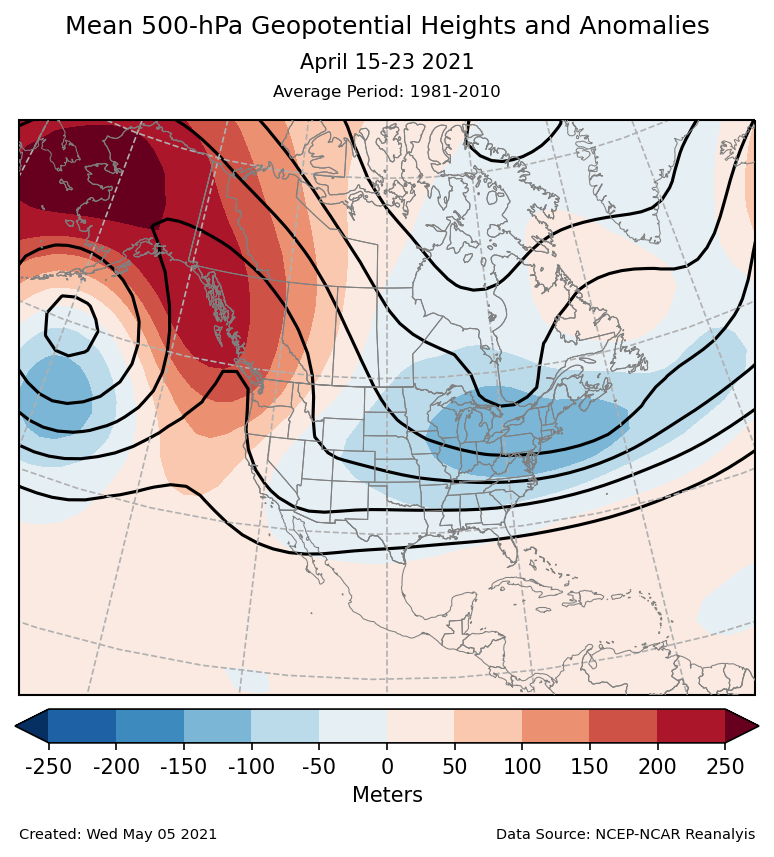 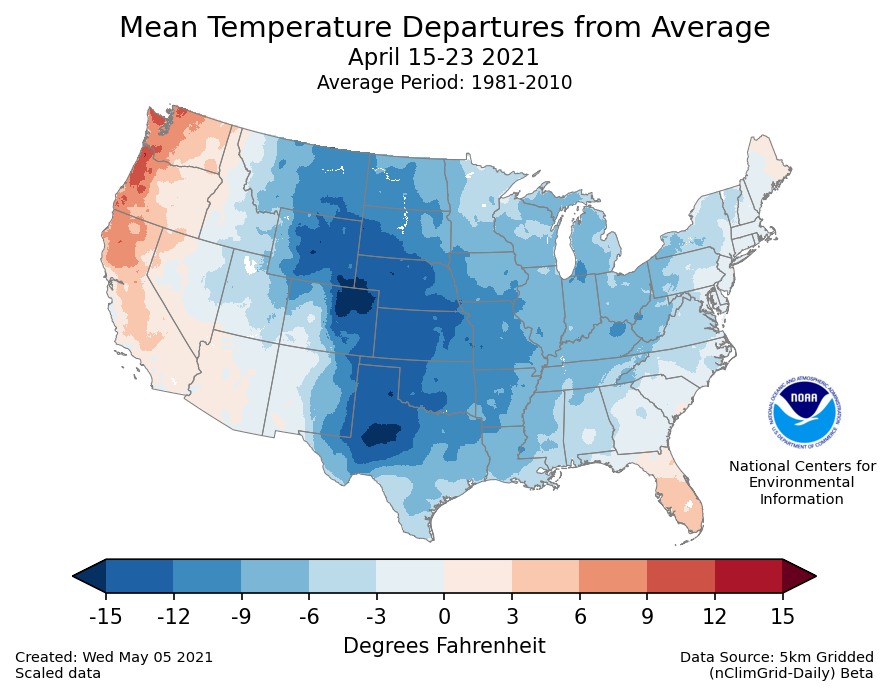 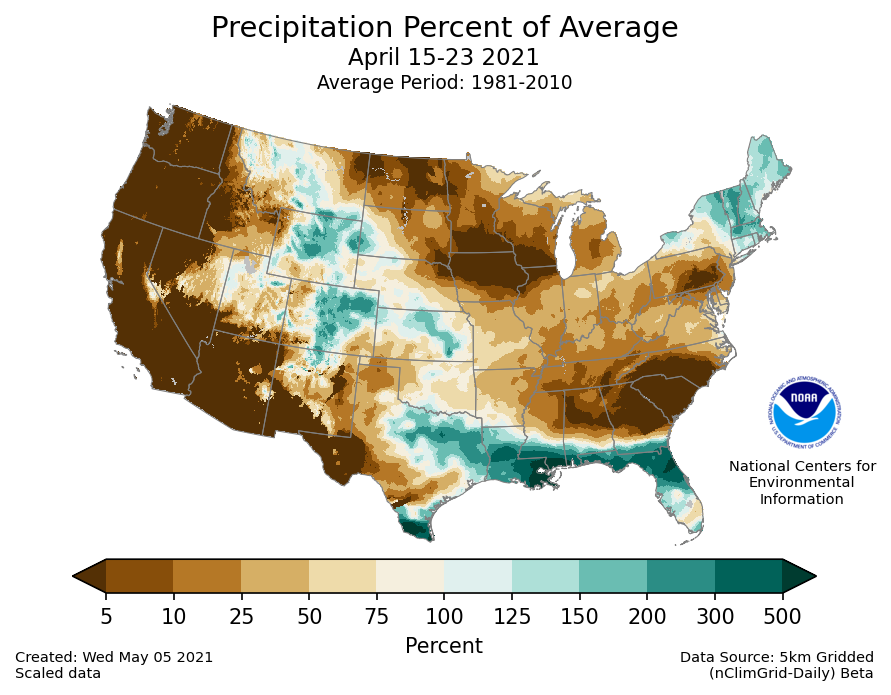 The third week of April featured an exceptionally strong ridge over Alaska in association with negative phases of the EPO and WPO. The northerlies on the east side of that ridge fed another major cold front that led to a cold air outbreak from the Great Plains eastward. 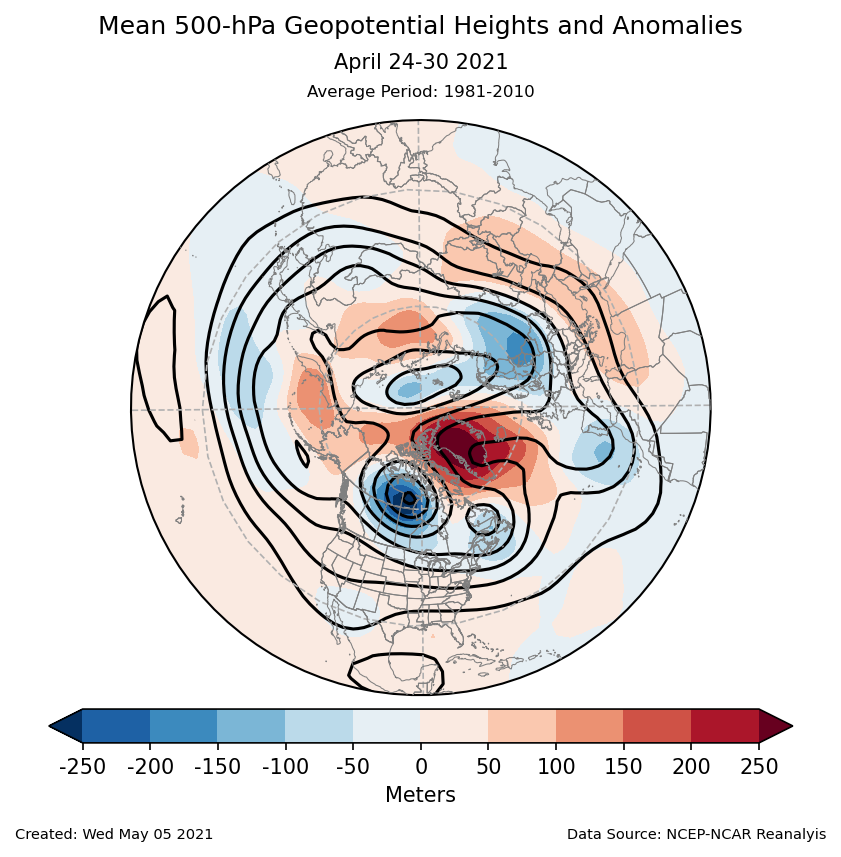 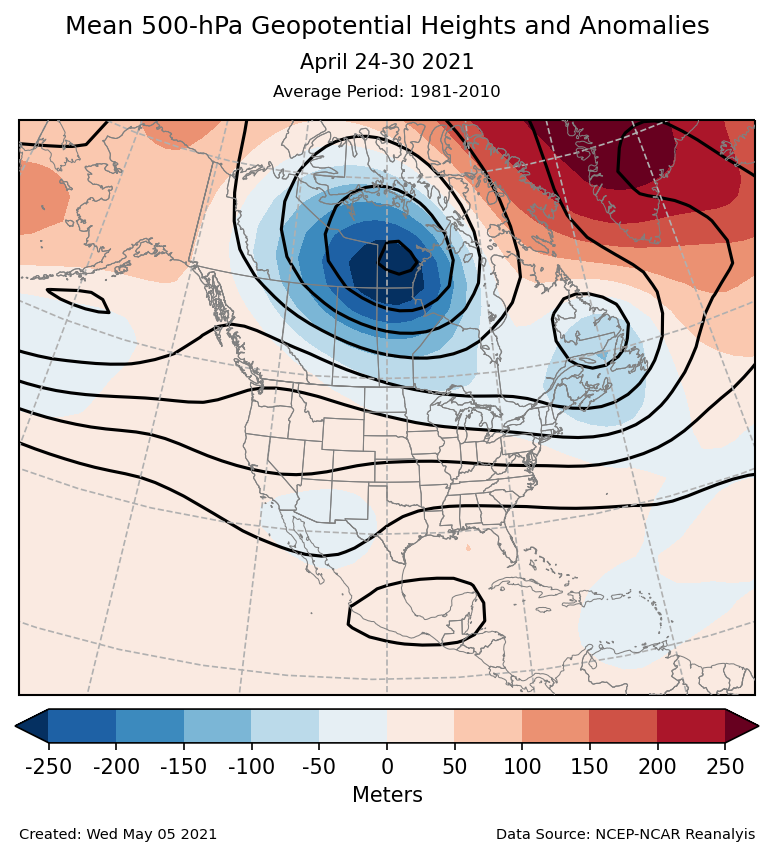 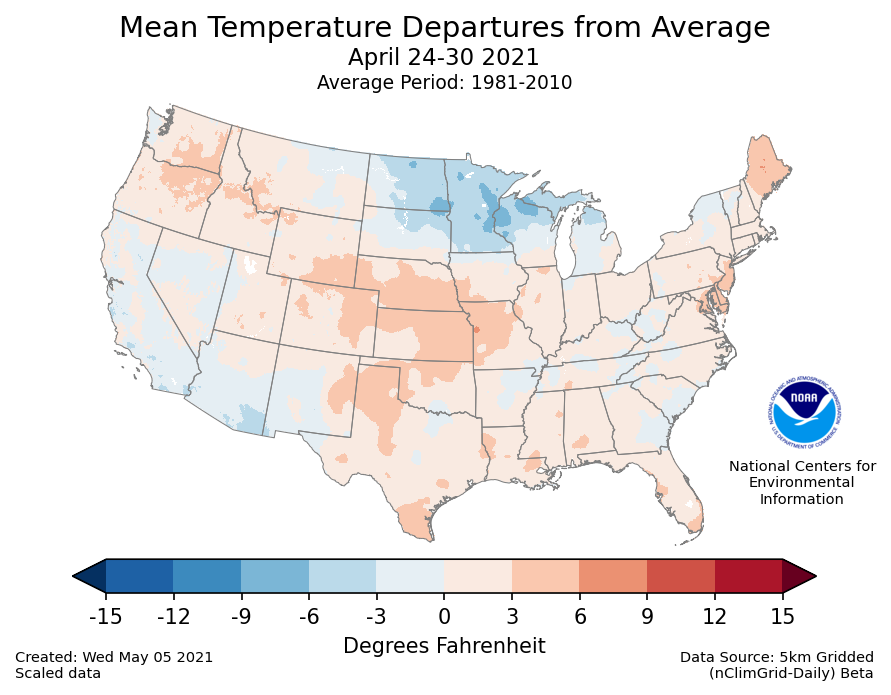 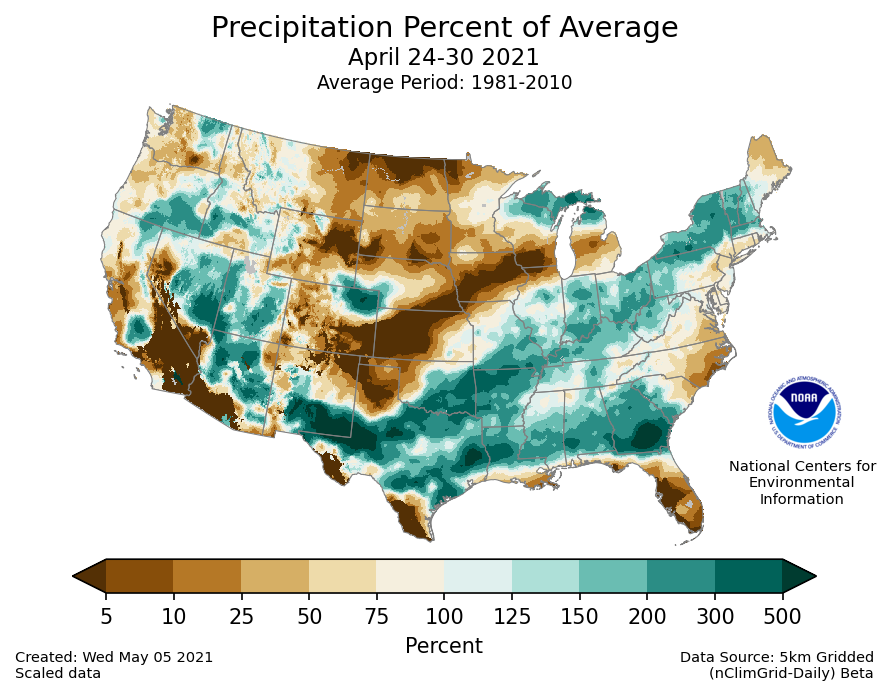 During the final week of April, the ridge over the North Pacific finally weakened, which allowed a more active and propagating weather pattern over North America. The temperature anomalies were more transient during this period. However, the enhanced activity along the subtropical jet brought precipitation to portions of the Southwest and the Southeast including a major hailstorm across Texas and Oklahoma on April 28.

NOAA National Centers for Environmental Information, State of the Climate: Synoptic Discussion for April 2021, published online May 2021, retrieved on June 17, 2021 from https://www.ncdc.noaa.gov/sotc/synoptic/202104.