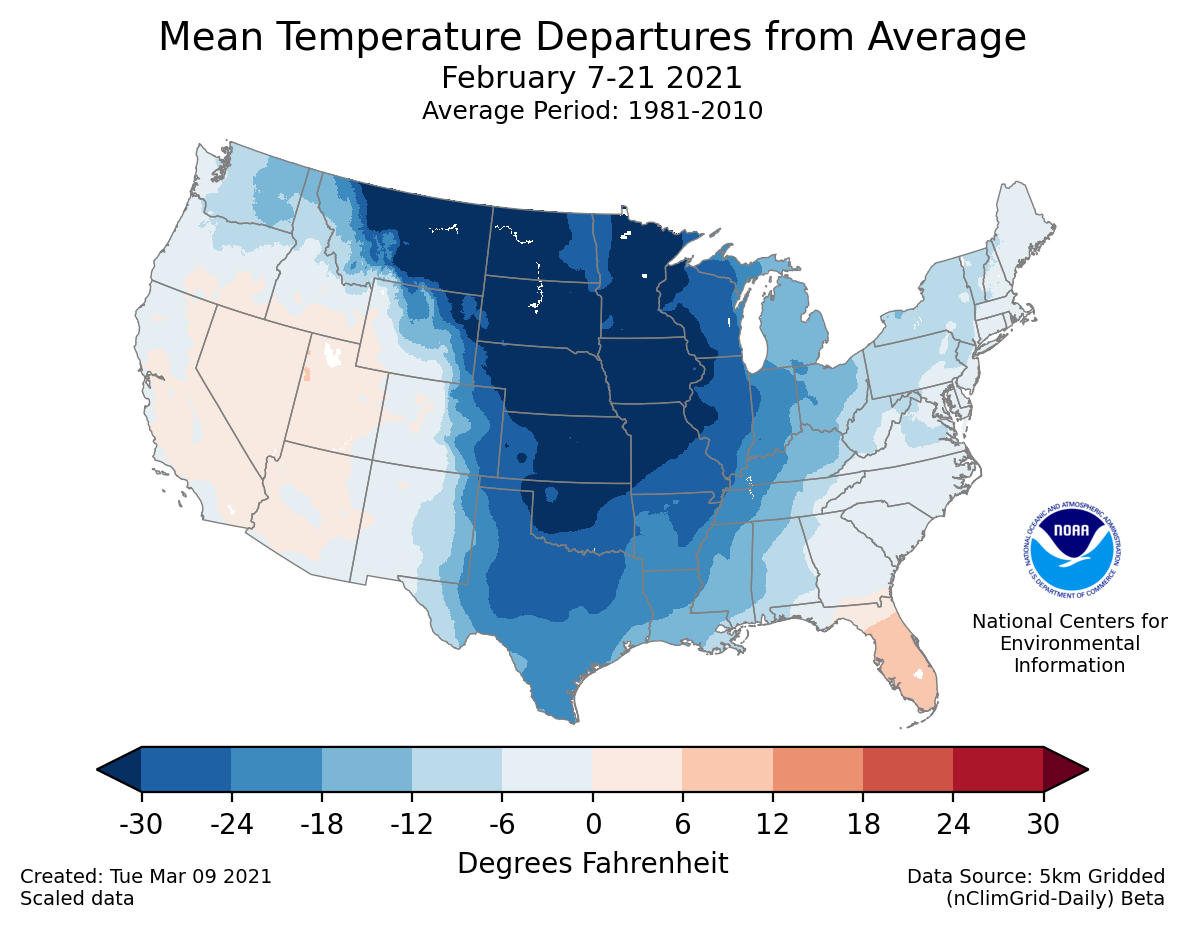 The North American climate in February was strongly modulated by extreme variability in the Arctic Oscillation (AO). A strongly negative AO at the beginning of the month was associated in part with a stratospheric warming event that happened during late December through January. The AO reached -5.3 on February 10-11, which tied February 5, 1978 and February 13, 1969 for the lowest daily February value since 1950. In addition to this extreme negative value, the AO also experienced large volatility in February. During the middle of the month, it rapidly switched sign and ended the month strongly positive.

The negative AO is typically associated with cooler than normal temperatures over the Northern Plains. These anomalies were particularly extreme and long-lived during the middle of February. A large swath of the Plains was more than 30°F below normal for the two-week average February 7-21. This event set numerous records and was the coldest event in the Contiguous U.S. in 30 years. It also caused significant strain on infrastructure and led to wide-spread power outages, particularly in Texas. The long duration of the event was driven in part by a ridge over northern Canada. Coupled with the trough over the Plains, that ridge produced a blocking pattern that weakened the jet stream and precluded the cold air from moving out of the region.

This cold event was particularly unusual in the context of climate change. The most recent National Climate Assessment reported very high confidence that climate change is making cold waves like the one in February weaker and less common. Those findings are consistent between both the historical record and also future model projections. On the other hand, it is less well understood how drivers like the AO or the blocking pattern might be influenced by climate change.

The negative AO and the cold wave were both also consistent with the ongoing La Niña event. However, this event is not particularly strong and could not account for the strength of the AO and temperature anomalies. The other key climate driver during February was a strong ridge over the Gulf of Alaska. The southeastern extension of this ridge limited the transport of moisture into the Southwest and prolonged the drought conditions there. It also likely contributed to the strength of the trough downstream over the Plains. 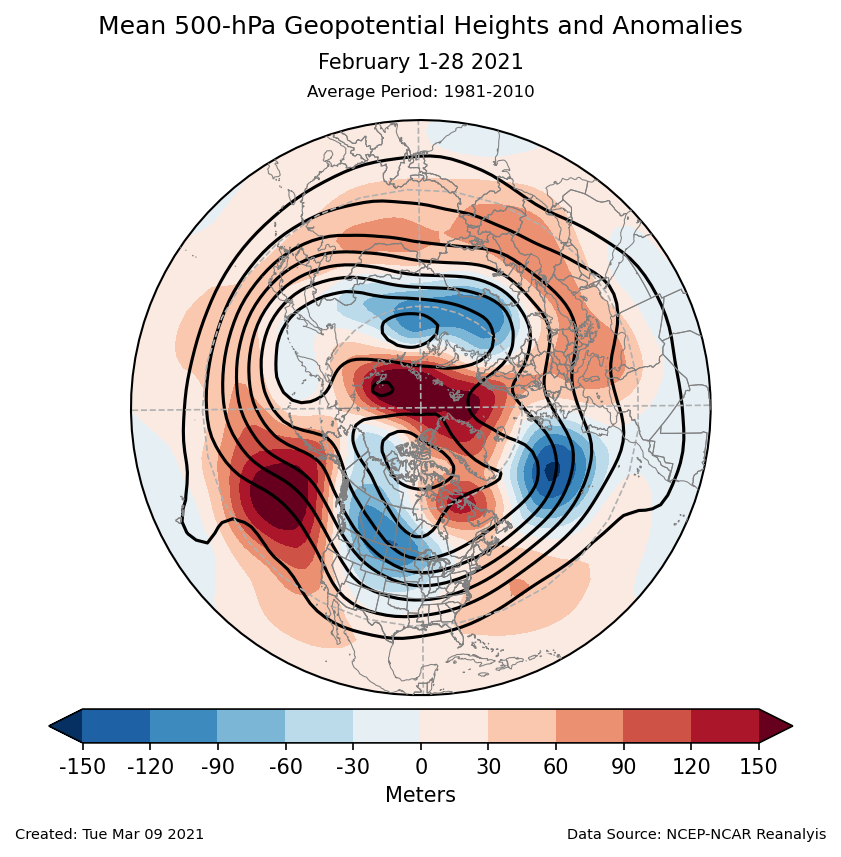 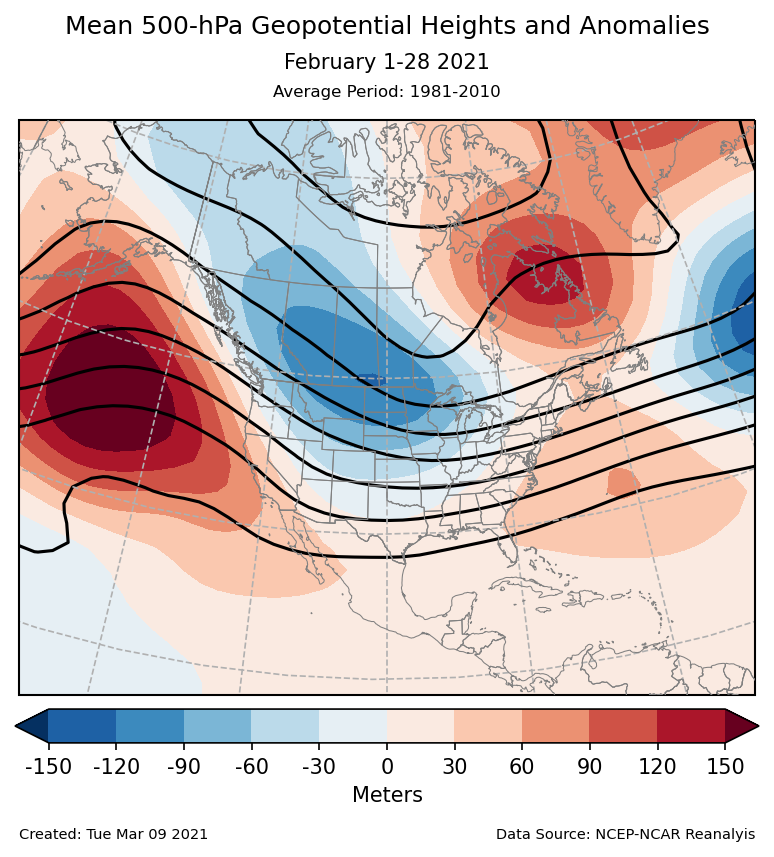 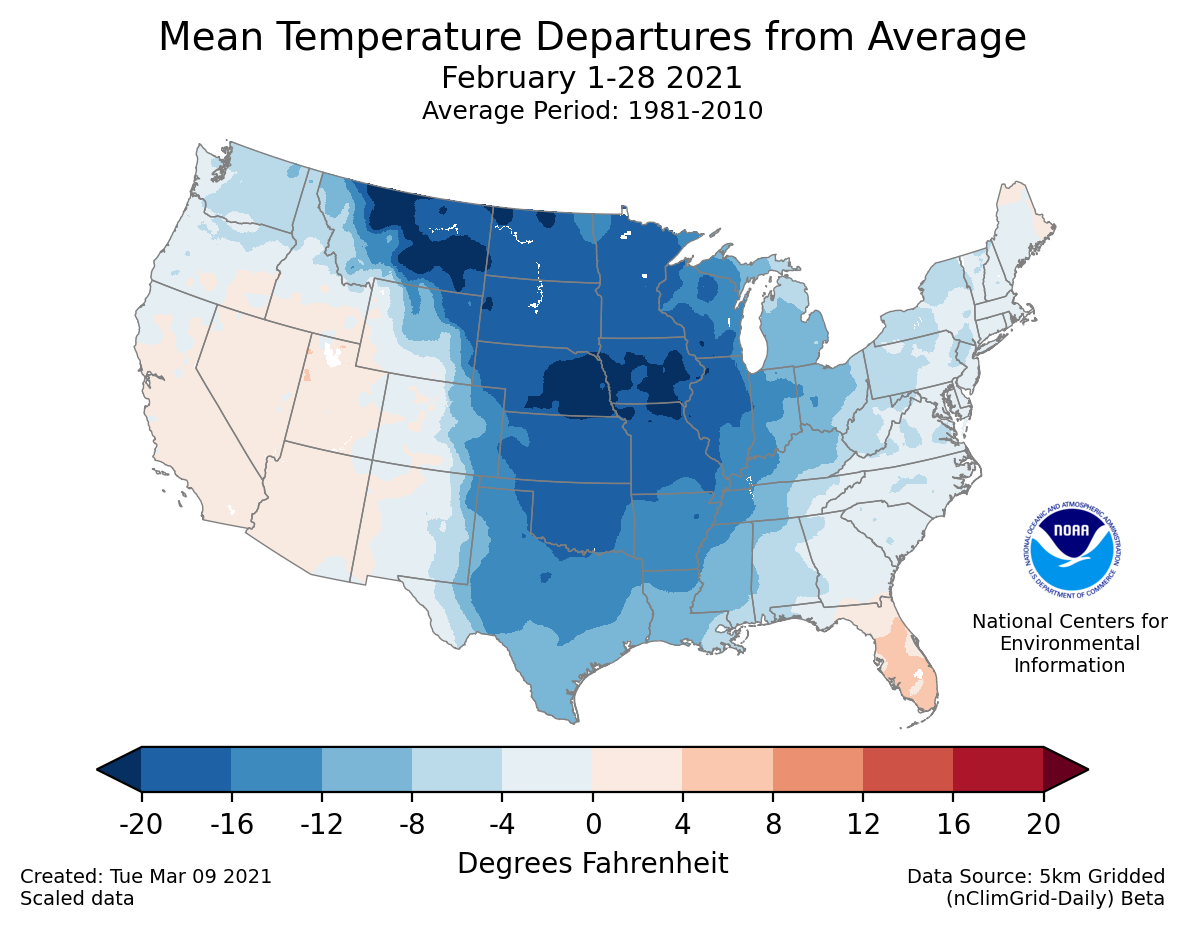 Temperature anomalies (departure from normal) for the CONUS for February 2021 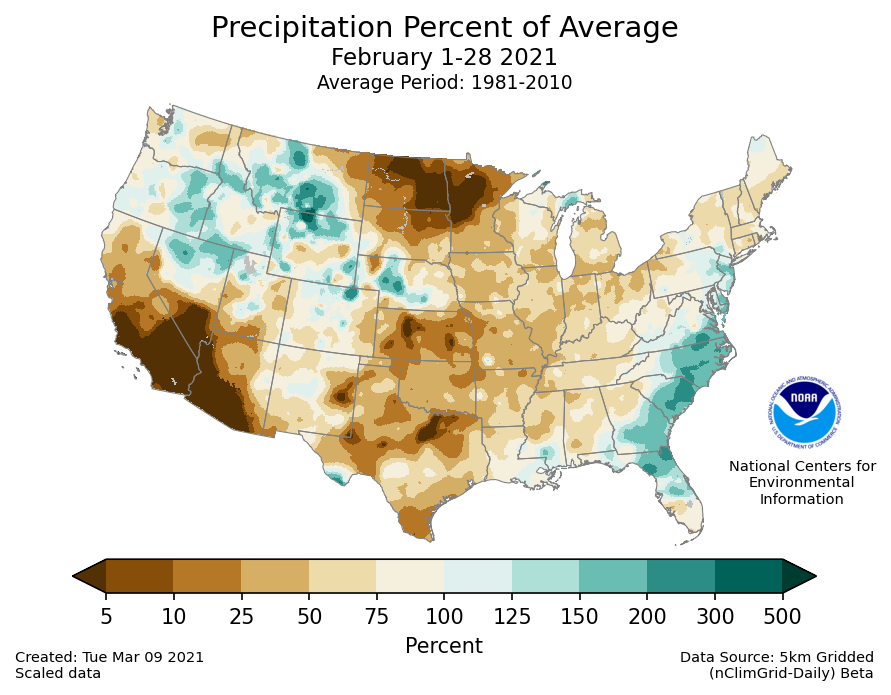 Precipitation anomalies (percent of normal) for the CONUS for February 2021 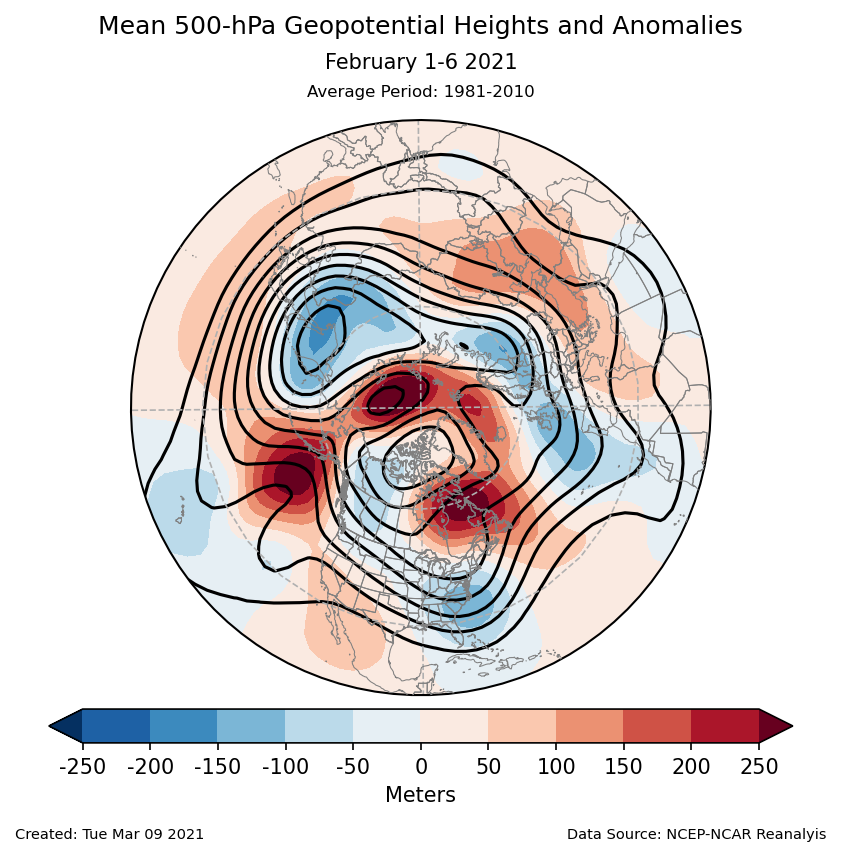 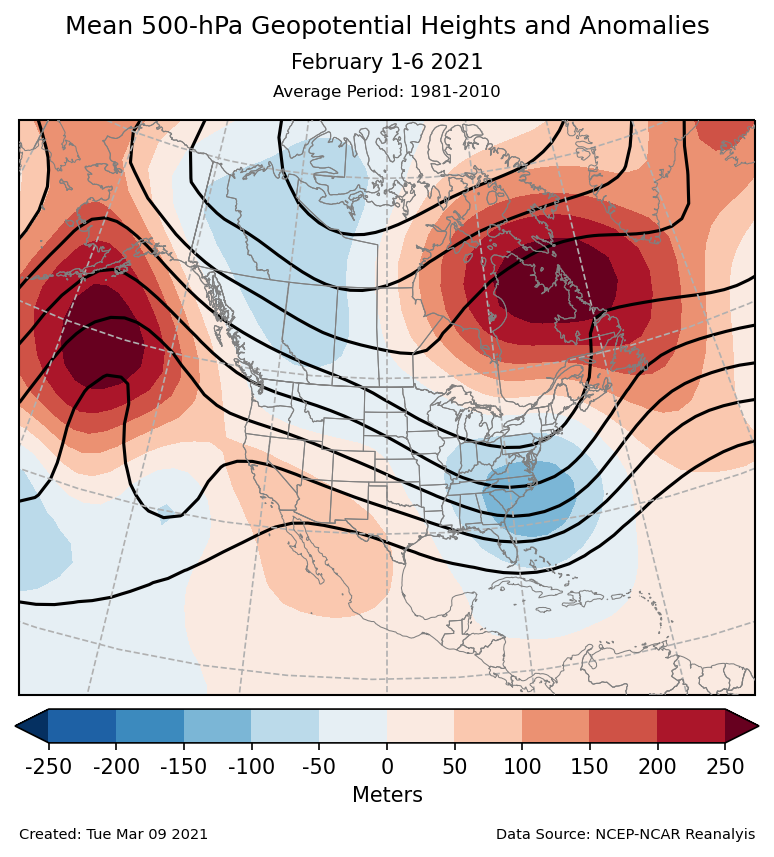 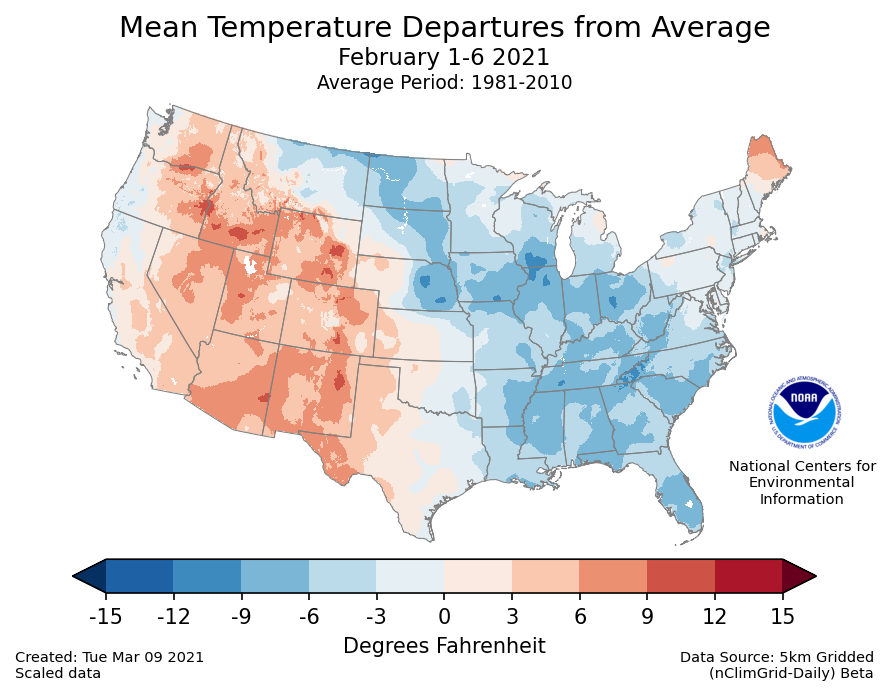 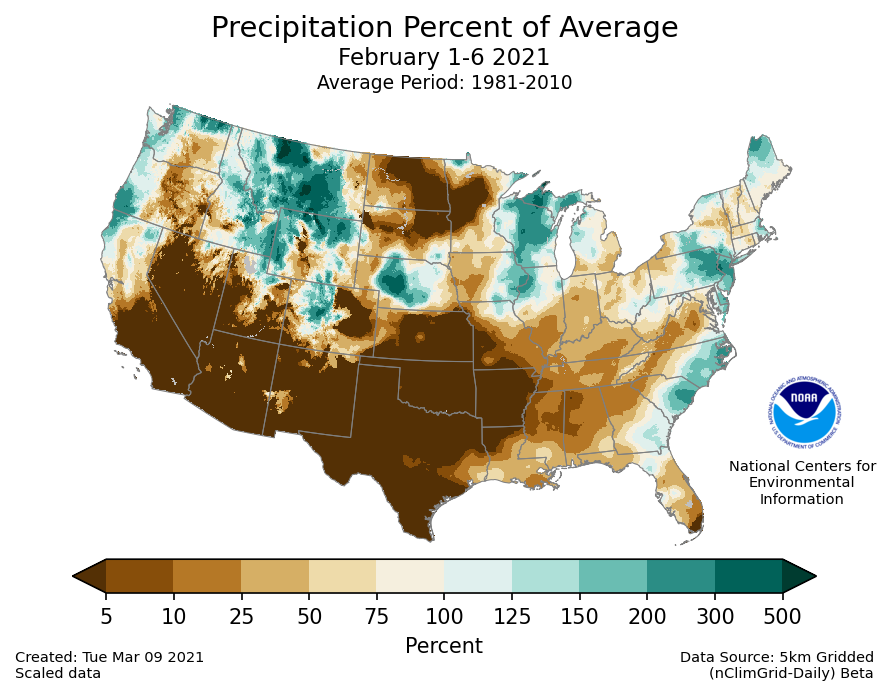 February began with cold anomalies across the eastern U.S. in the wake of a major winter storm from the end of January. That storm had become a strong nor'easter by the beginning of February and brought heavy snow to the Northeast. A ridge extending from the Southwest to the Gulf of Alaska brought warm anomalies to the Rockies and prohibited precipitation over the Southwest. A cold front swept through the Plains February 4-5 and brought the leading edge of the Arctic air that would dominate the region for the next two weeks. 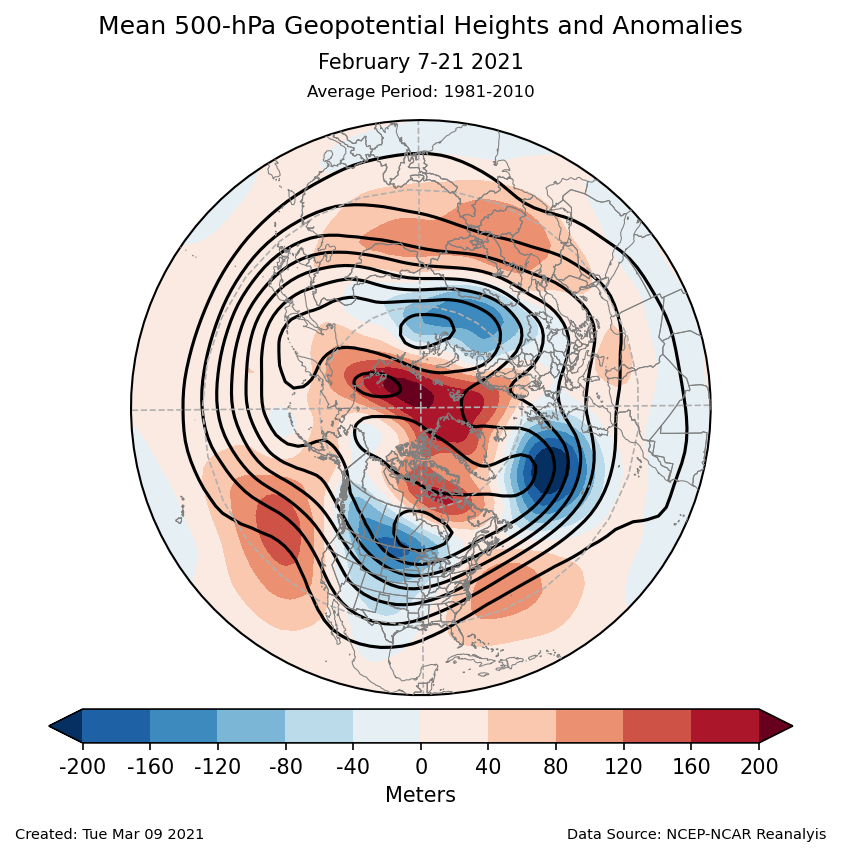 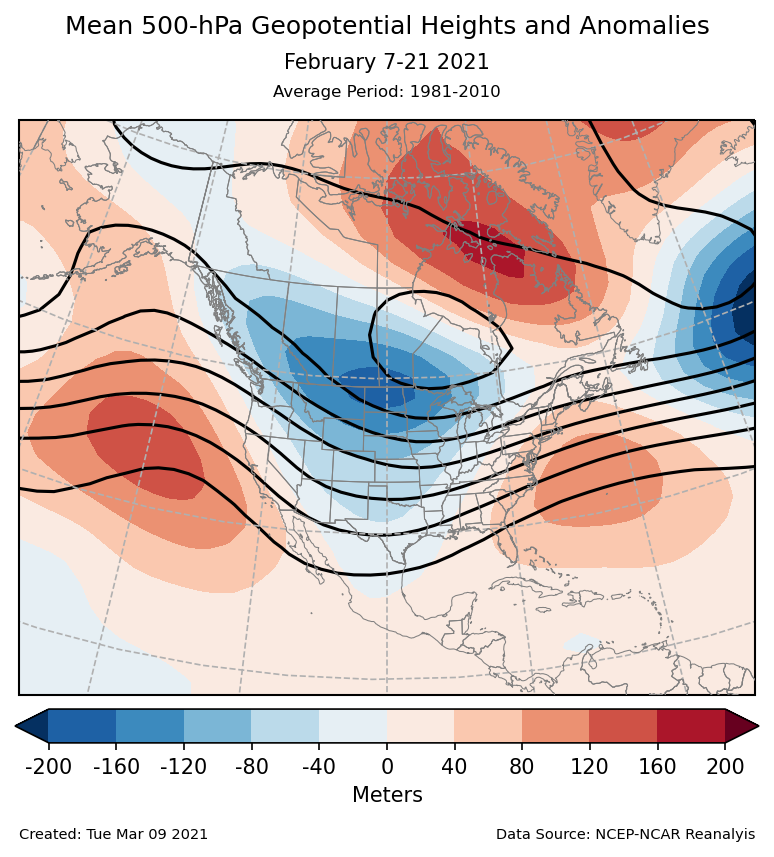 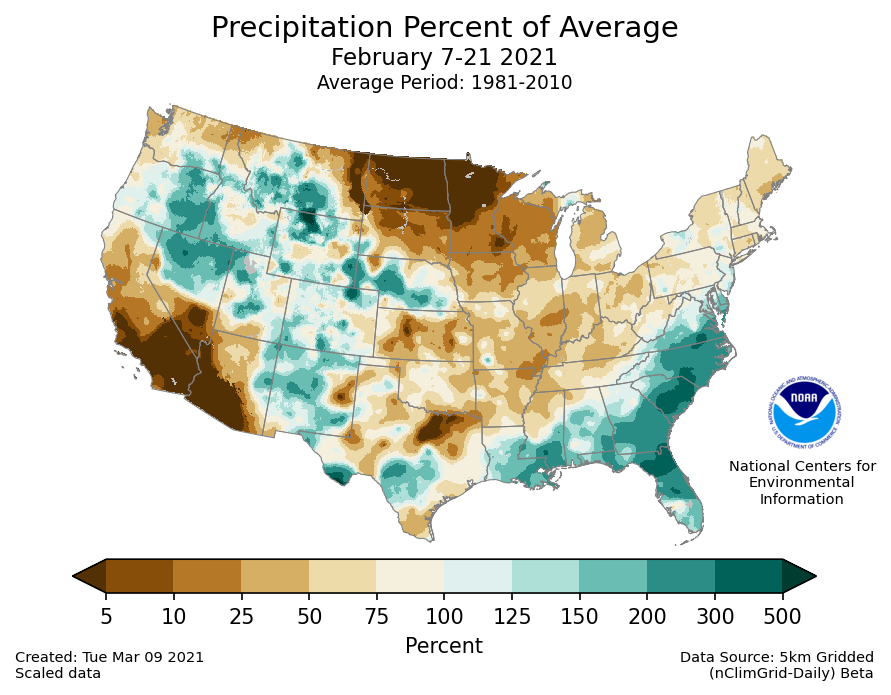 During the middle of February, the contiguous U.S. experienced the strongest cold wave in 30 years. Note the larger contour interval needed to illustrate the temperature anomalies during this major event. A large swath of the Plains experienced temperatures that averaged more than 30°F below normal over this 14-day period. These extreme temperatures broke numerous records across the region.

The frigid temperatures were associated with a broad and stationary trough over the Northern Plains. A ridge to its north over northern Canada created a blocking pattern that weakened the jet stream and contributed to the long duration of the event. That pattern was also associated with a strongly negative AO, which peaked at -5.3 on February 10-11. These values tied February 5, 1978 and February 13, 1969 for the strongest negative AO in February since 1950.

The ridge over northern Canada weakened around the middle of the month as the negative AO rapidly weakened. This allowed for more propagating weather patterns. However, instead of moving the cold air out of the U.S., it initially brought more shortwave troughs from the Arctic that reinforced the cold. It also led to several winter storms in the Southeast and resulted in the largest Contiguous U.S. snow cover in the recording period starting October 2003. The widespread snow cover included most of Texas. One of these storms even spawned an EF-3 tornado in eastern North Carolina. 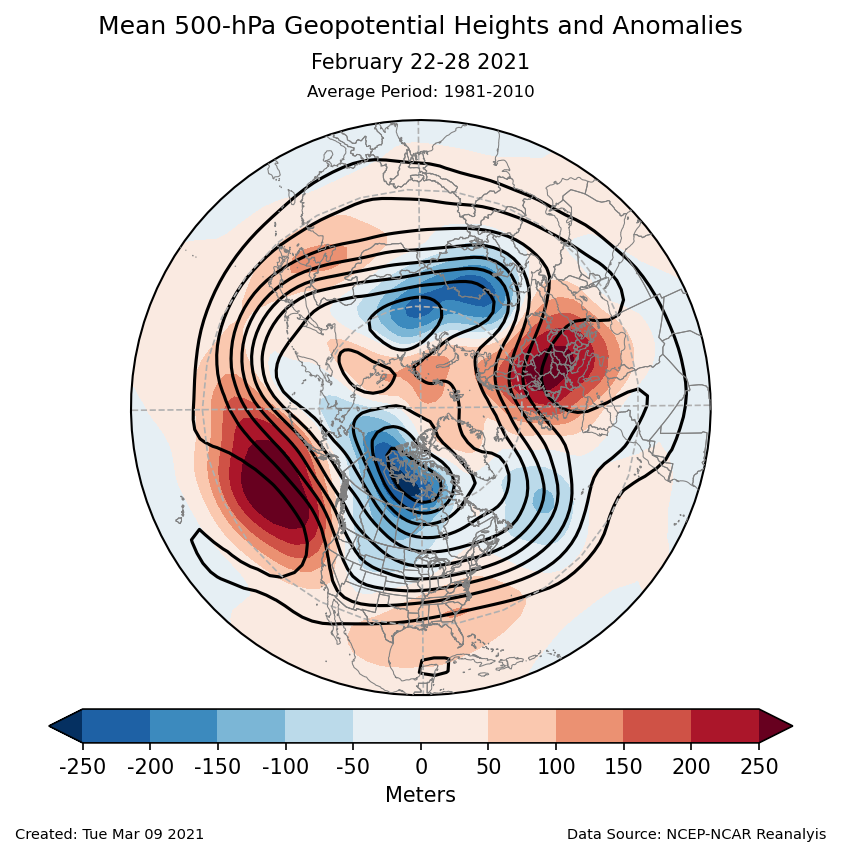 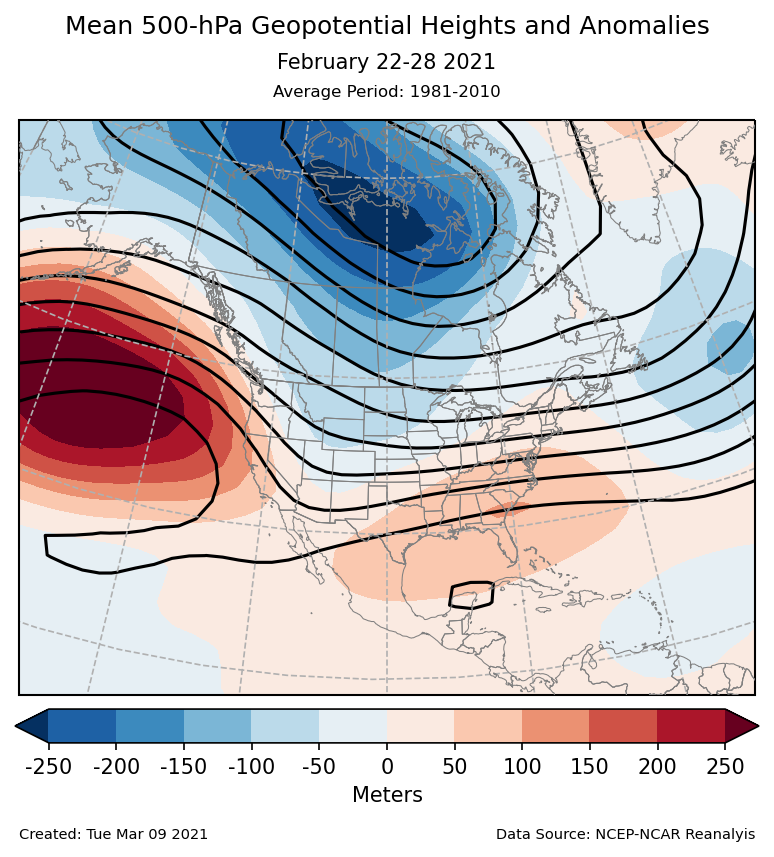 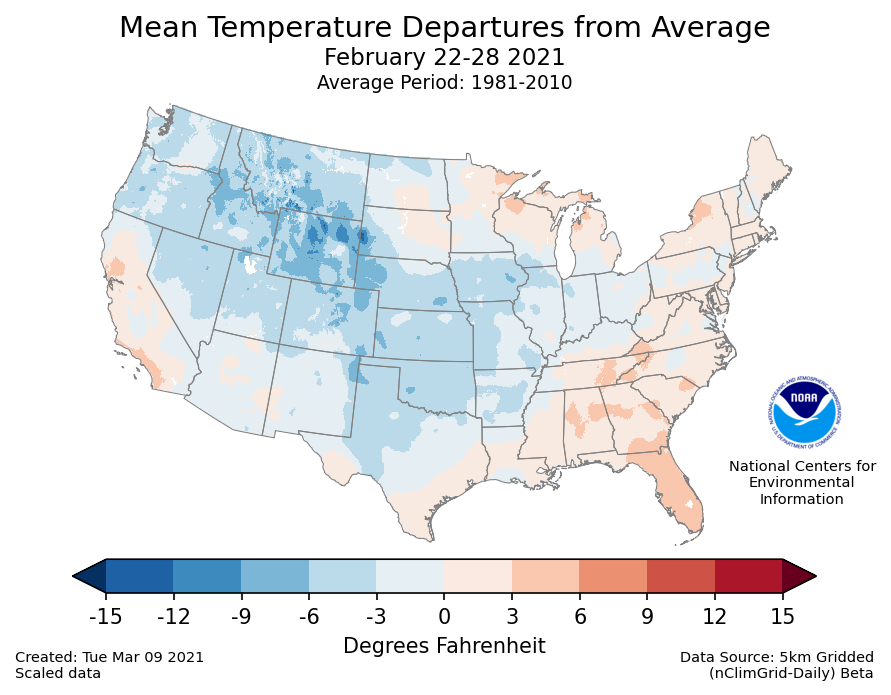 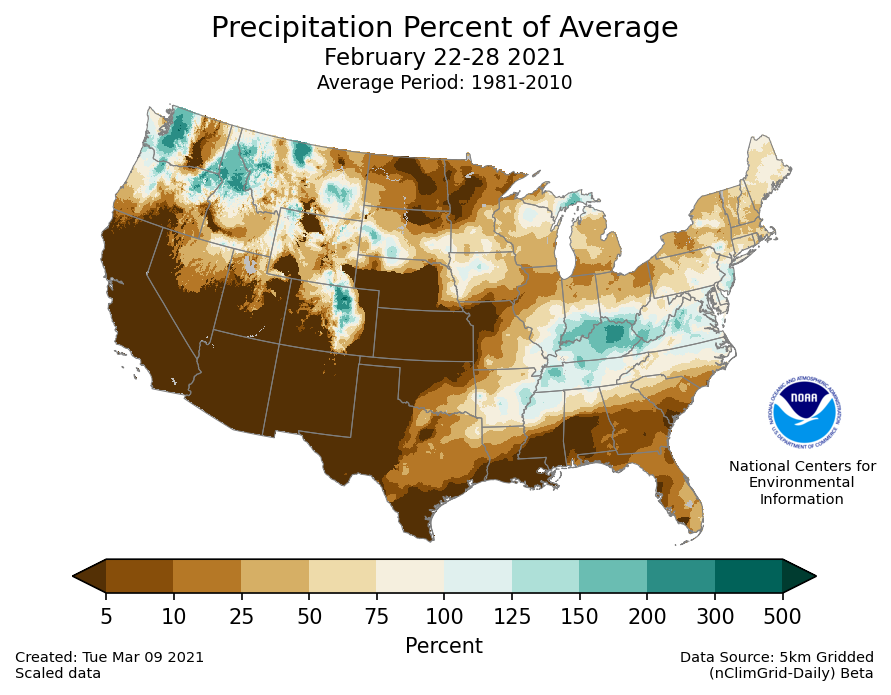 A growing positive AO during the final week of February helped to bring an end to the cold wave. It strengthened the jet stream and finally moved the broad trough and its associated cold temperatures northeastward. A ridge anchored over the Southeast brought early spring-like temperatures. However, the more active weather pattern also brought Denver, CO its strongest snowstorm since February 2016. 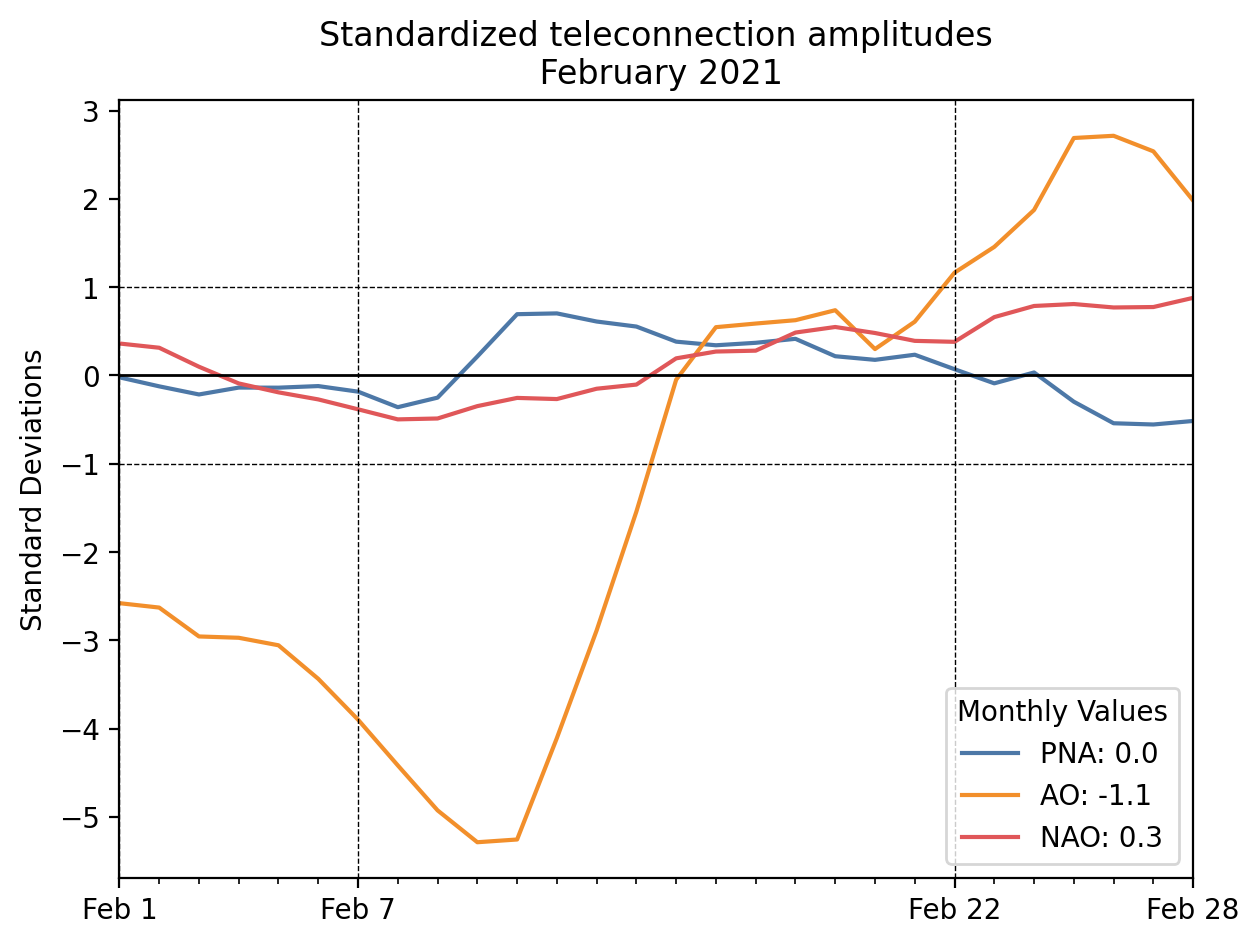 Time series of the PNA, AO, and NAO teleconnection indices for February 2021