The August 2020 means for temperature and precipitation are largely conglomerations of extreme events. All six states in the Southwestern U.S. ( California, Nevada, Arizona, Utah, New Mexico and Colorado) experienced record warm temperatures for August. While temperatures were warm throughout the month in this region, the record values were largely driven by an intensely hot period during August 15-21. The region also remained almost completely dry as it has since mid-April. Much of the Southeast and the East Coast were wetter than normal in August, but the vast majority of that precipitation came in the form of flooding from Hurricane Isaias (August 1-7) and back-to-back Hurricanes Marco and Laura (August 22-31).

The primary climate driver during August was the positive phase of the Pacific/North American pattern (PNA) associated with a subtropical ridge in the Pacific, a trough in the Gulf of Alaska, the ridge in the western U.S., and the trough in the East. A positive PNA during the summer is typically associated with warmer conditions on both coasts, which happened in August. The positive PNA is also strongly tied to the La Niña conditions that developed during August, which often leads to more frequent positive PNA episodes. These effects of La Niña on the PNA were in turn modulated by an active Madden-Julian Oscillation (MJO). Both the MJO and the La Niña aligned in the second half of the month to provide favorable conditions for Atlantic tropical cyclone activity, including Hurricanes Marco and Laura. 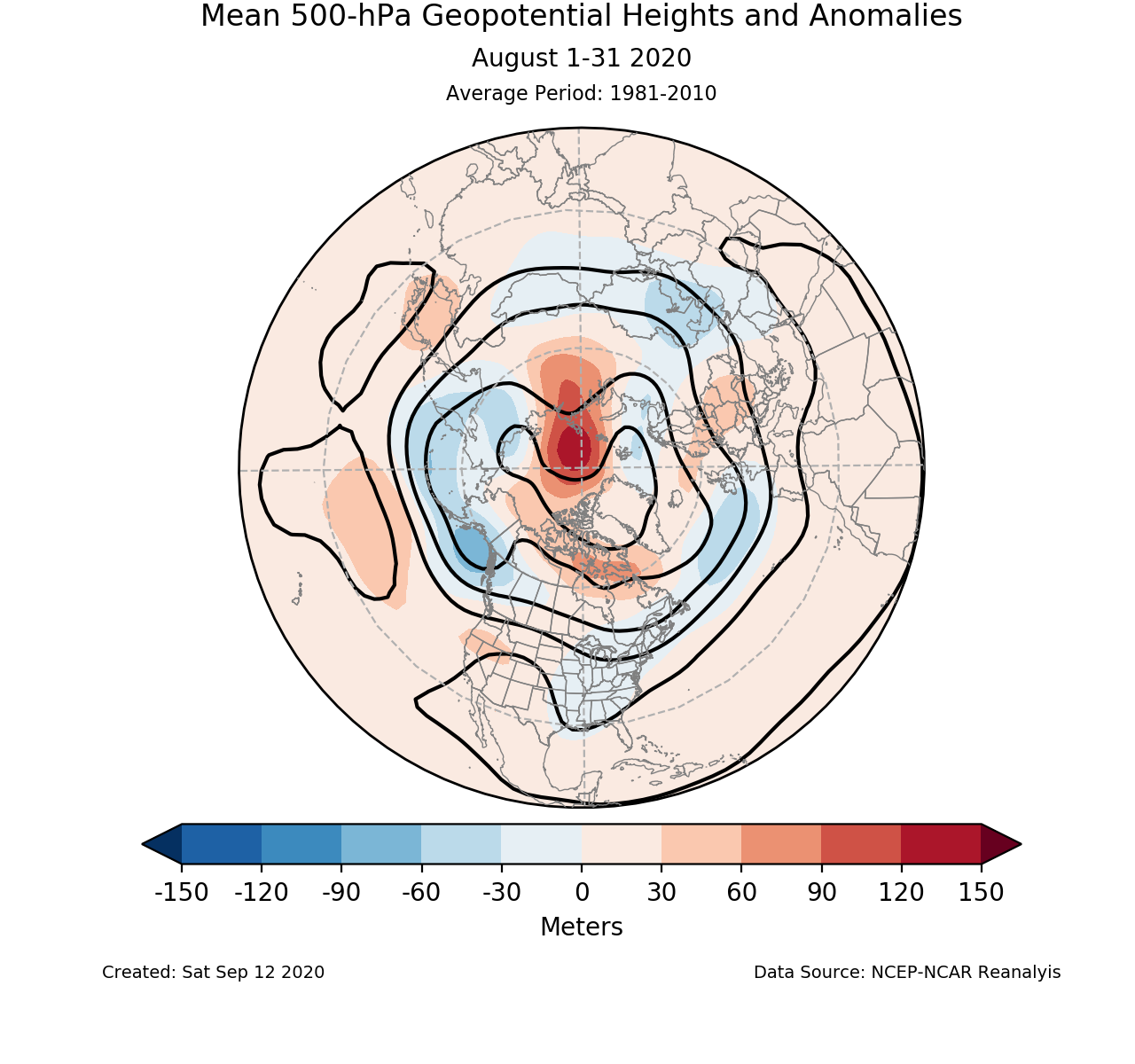 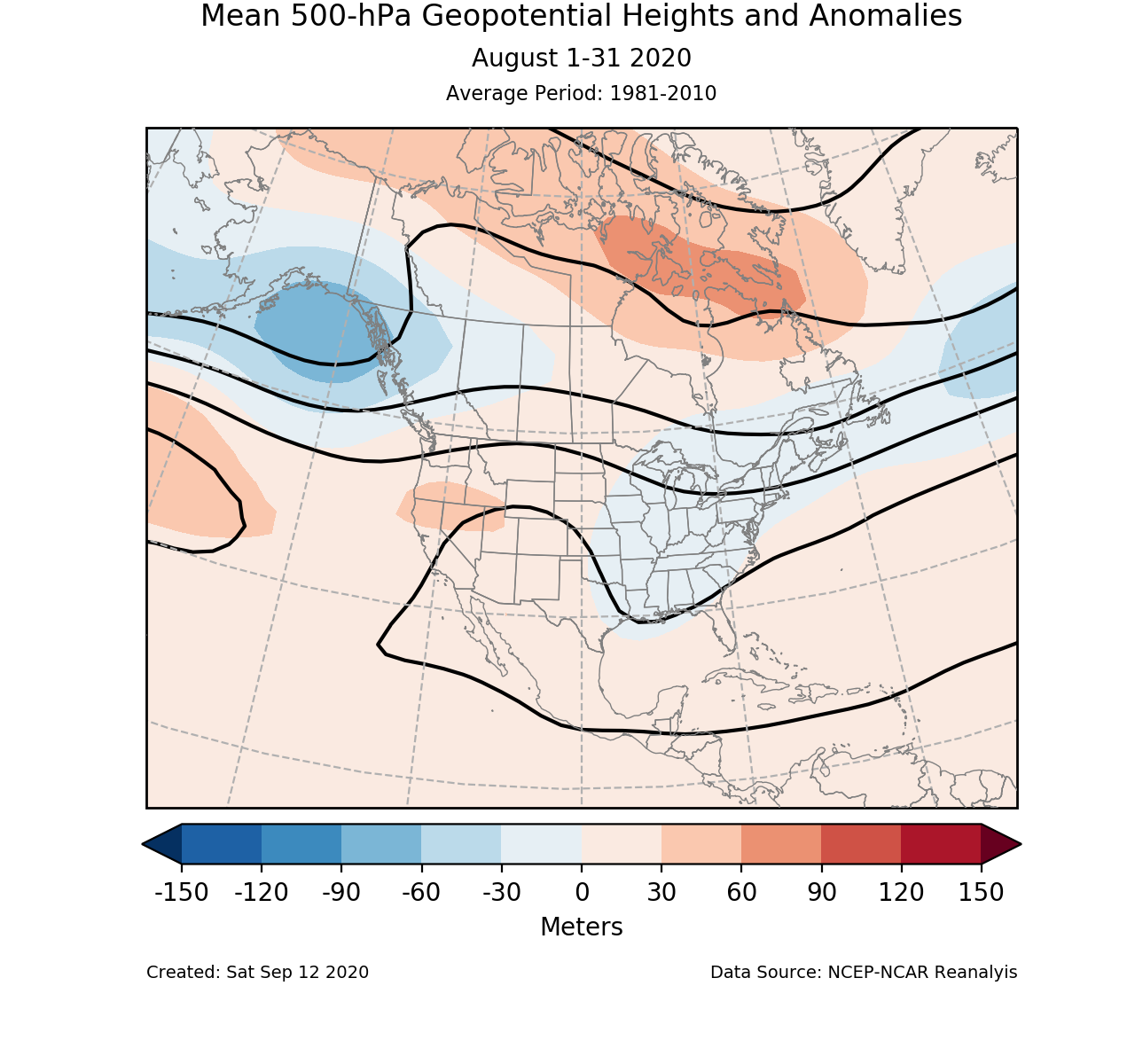 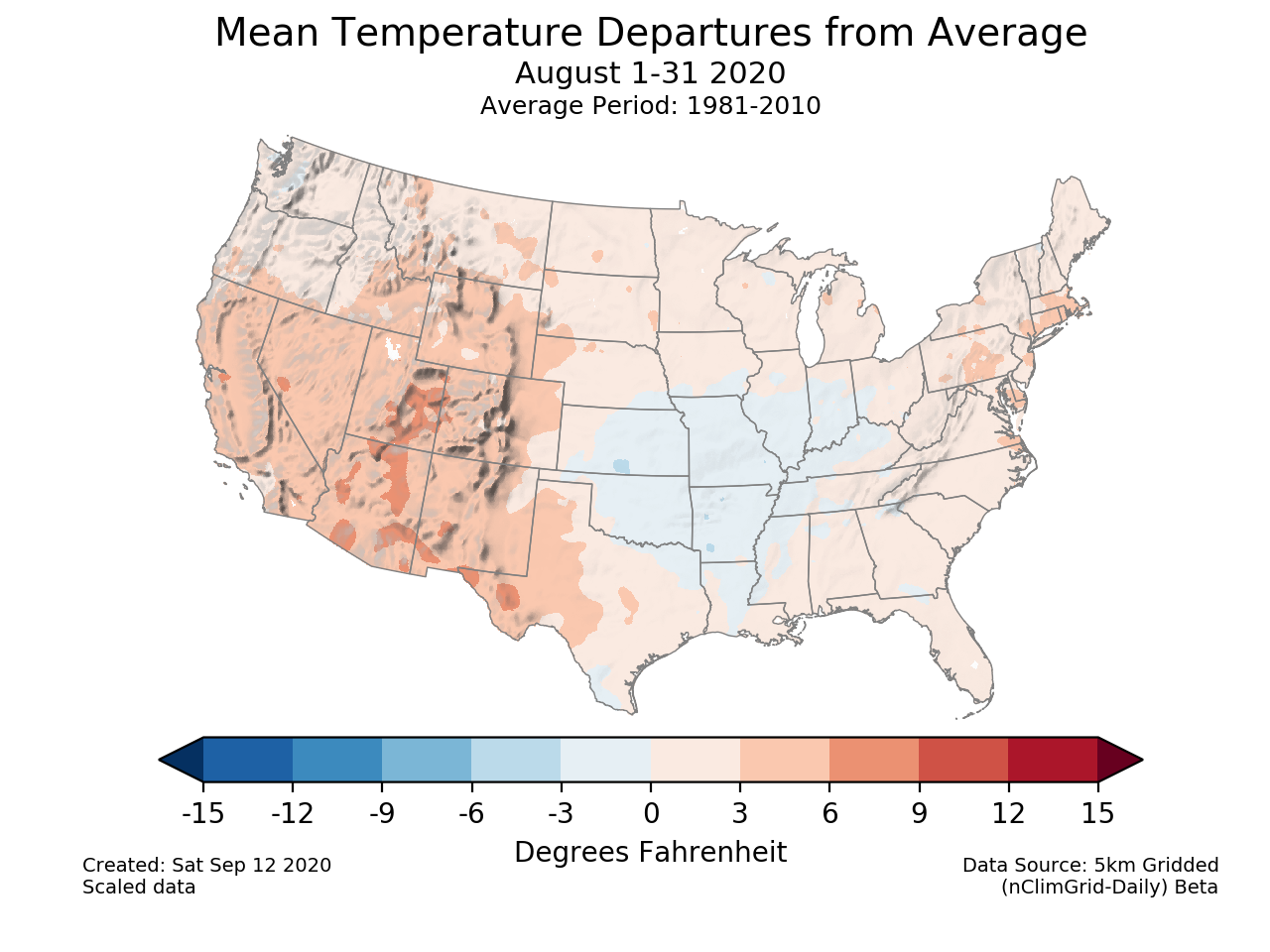 Temperature anomalies (departure from normal) for the CONUS for August 2020 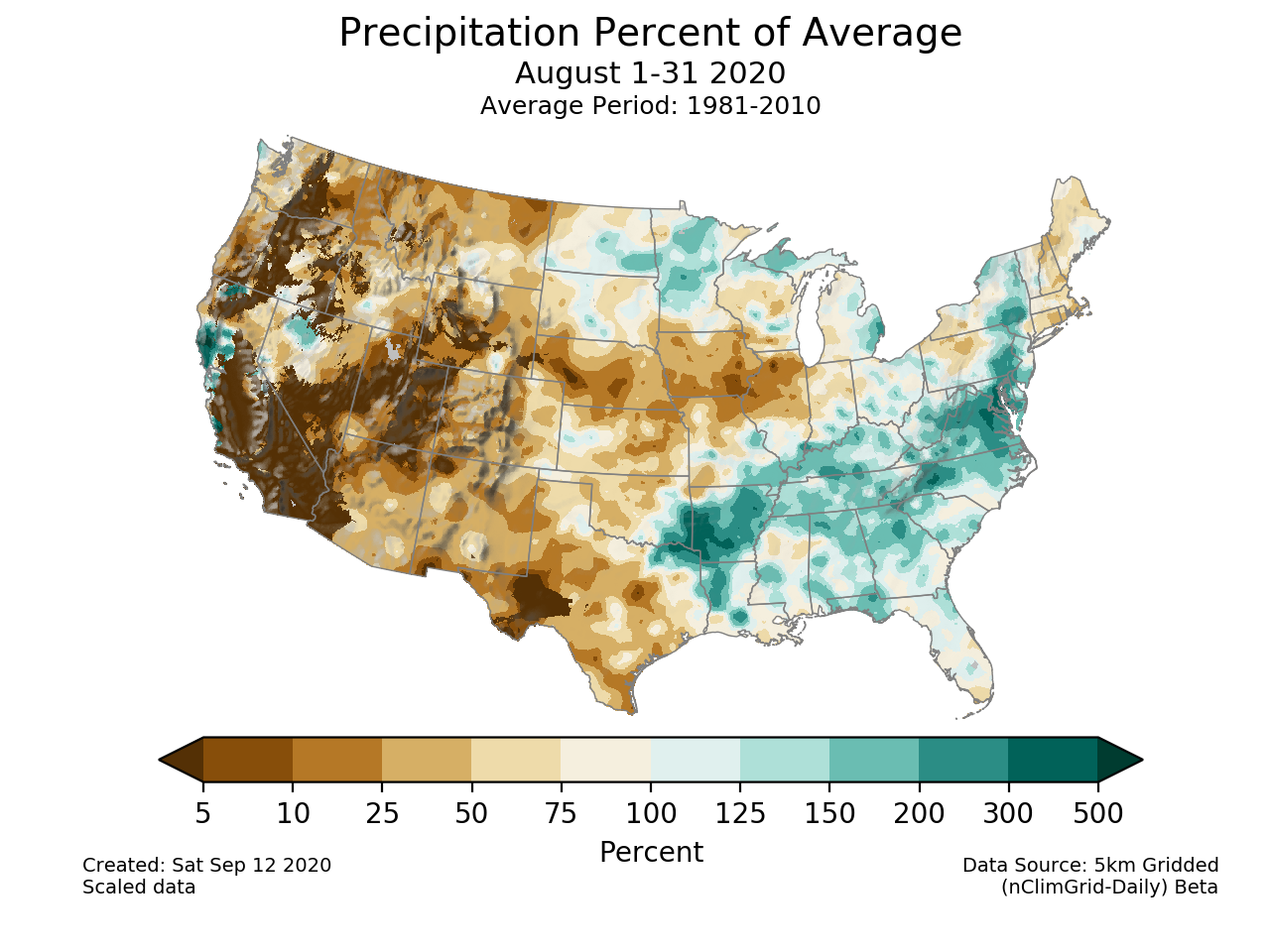 Precipitation anomalies (percent of normal) for the CONUS for August 2020 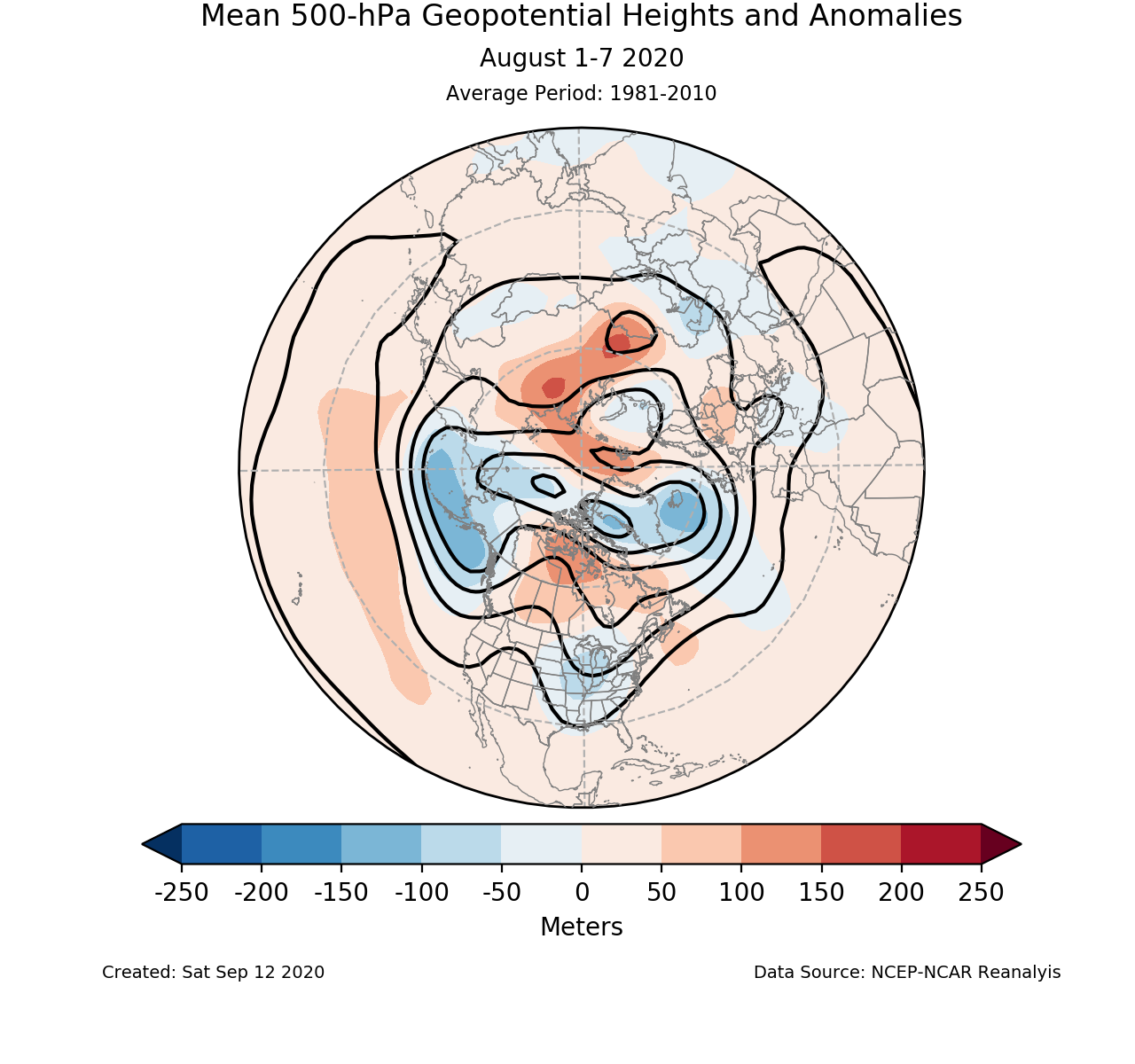 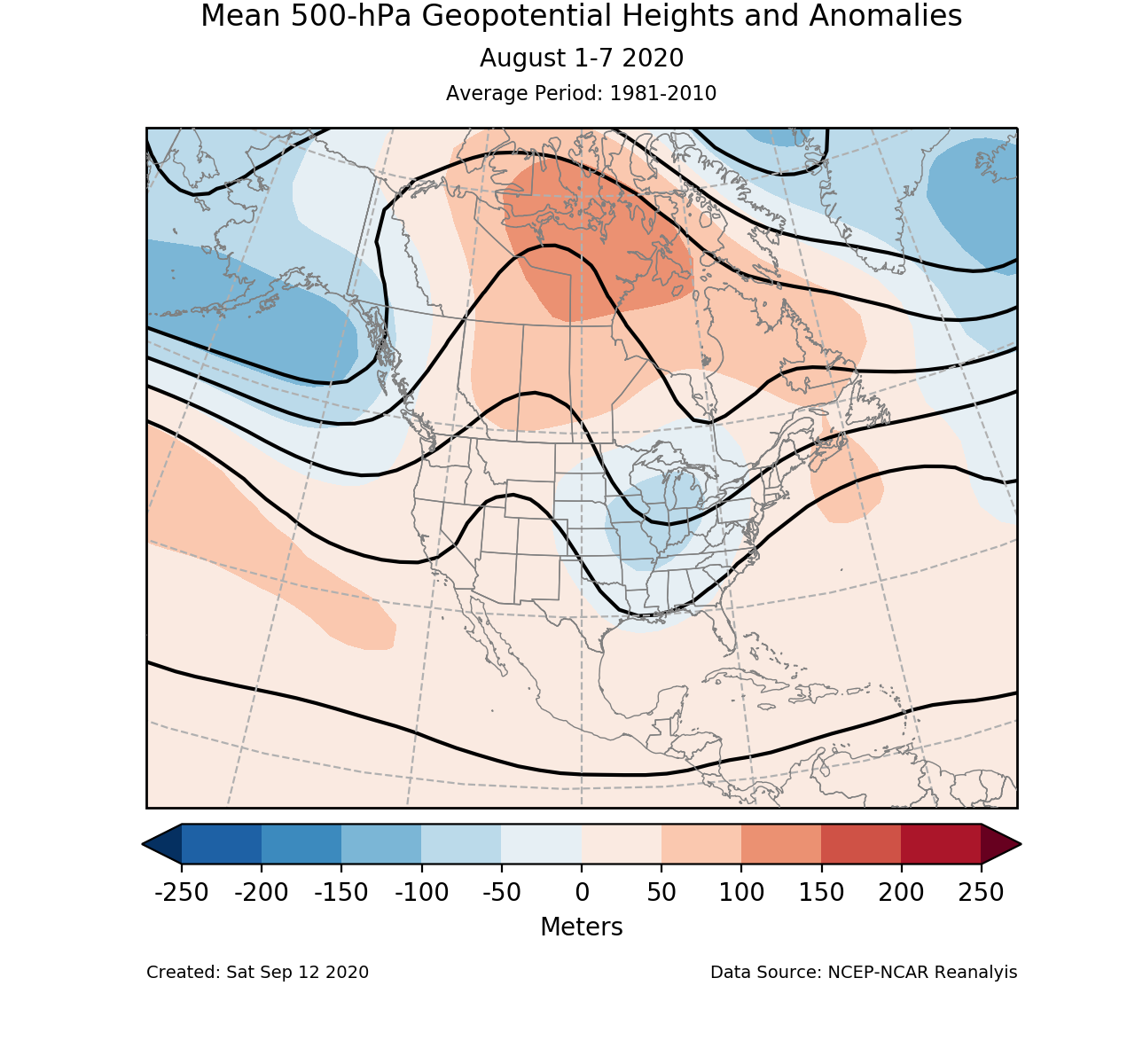 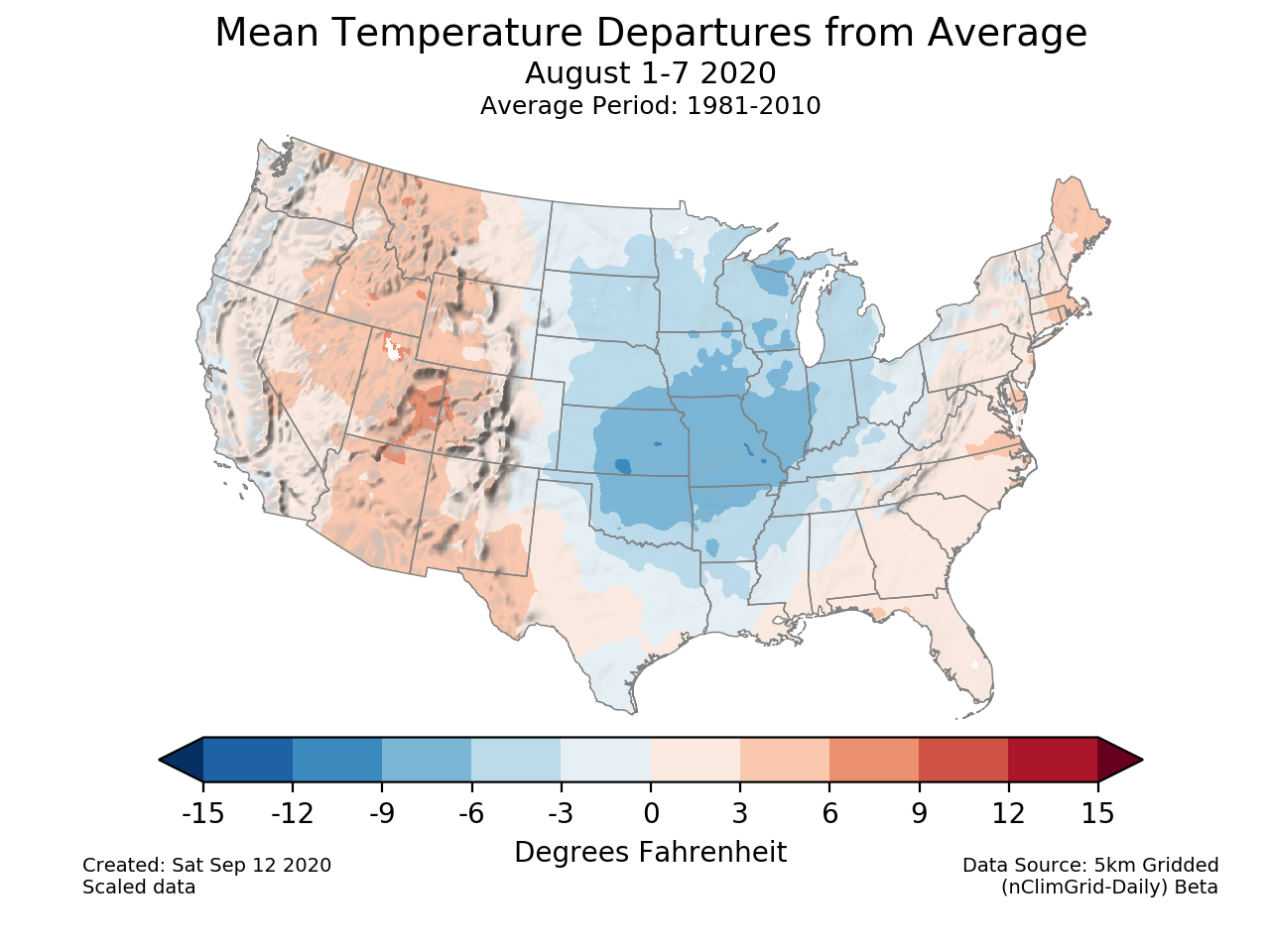 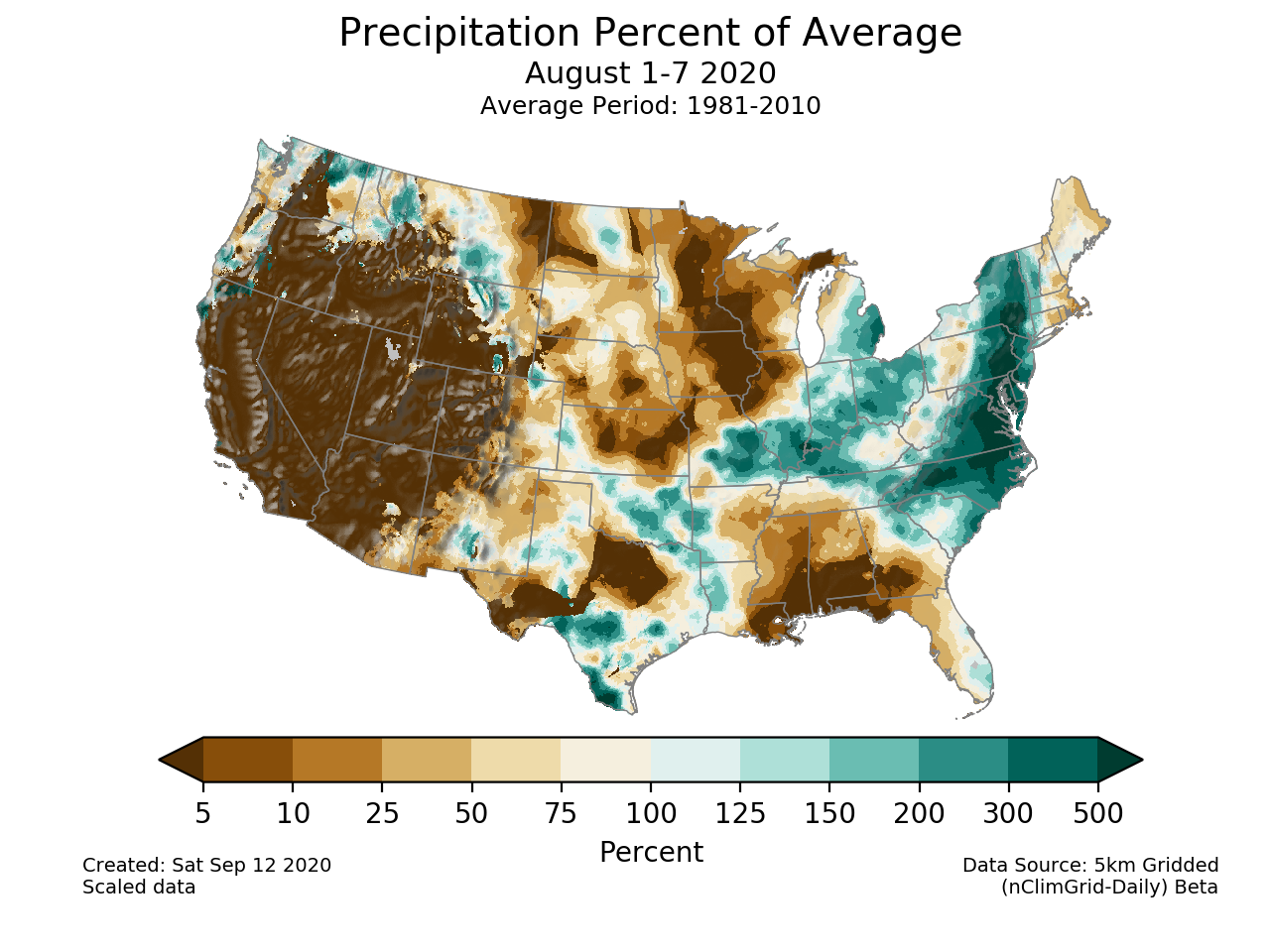 August began with a typical positive PNA circulation that featured a subtropical ridge in the Pacific, a trough in the Gulf of Alaska, a ridge over the western U.S. and a trough in the East. Even though the western ridge was only moderately stronger than normal, it still contributed to above-normal temperatures throughout the Rockies and dry conditions through the western U.S. In the Southwest, this dry pattern has been in place since mid-April and would persist through August. Farther east, the trough was associated with below-normal temperatures in the Central Plains. Hurricane Isaias made landfall in the Carolinas on August 4 and brought heavy rain from the Mid-Atlantic to the Northeast. 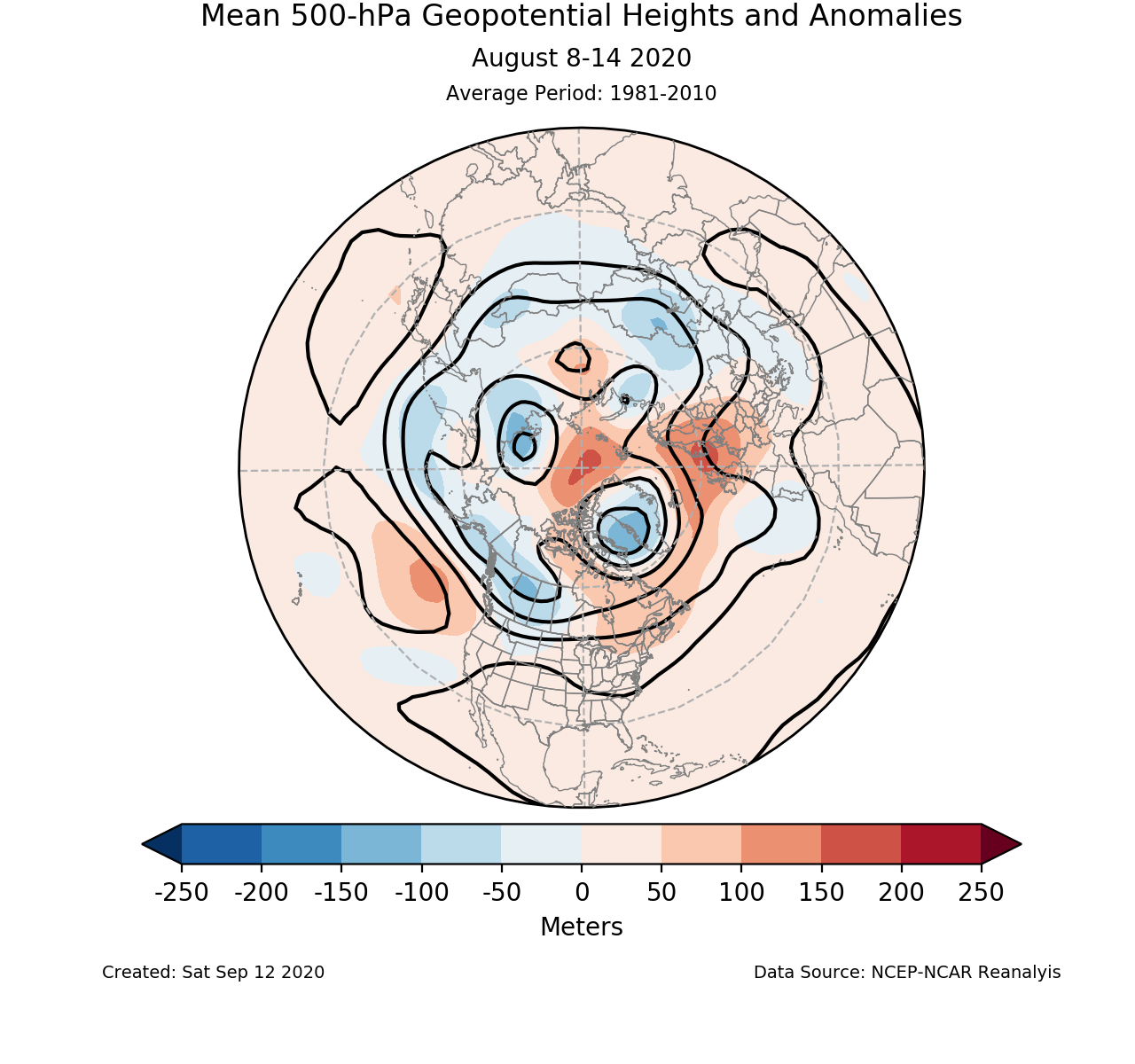 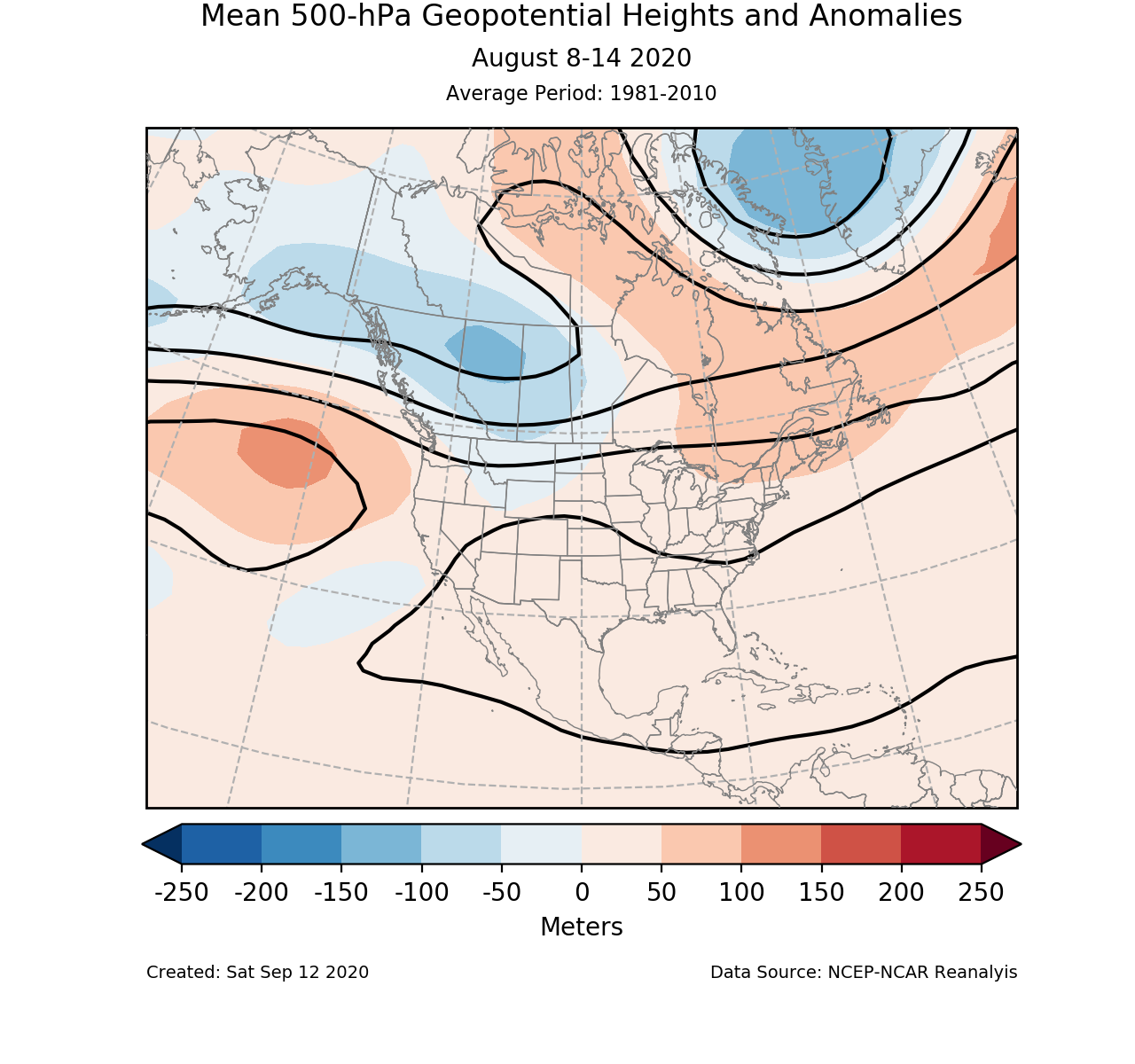 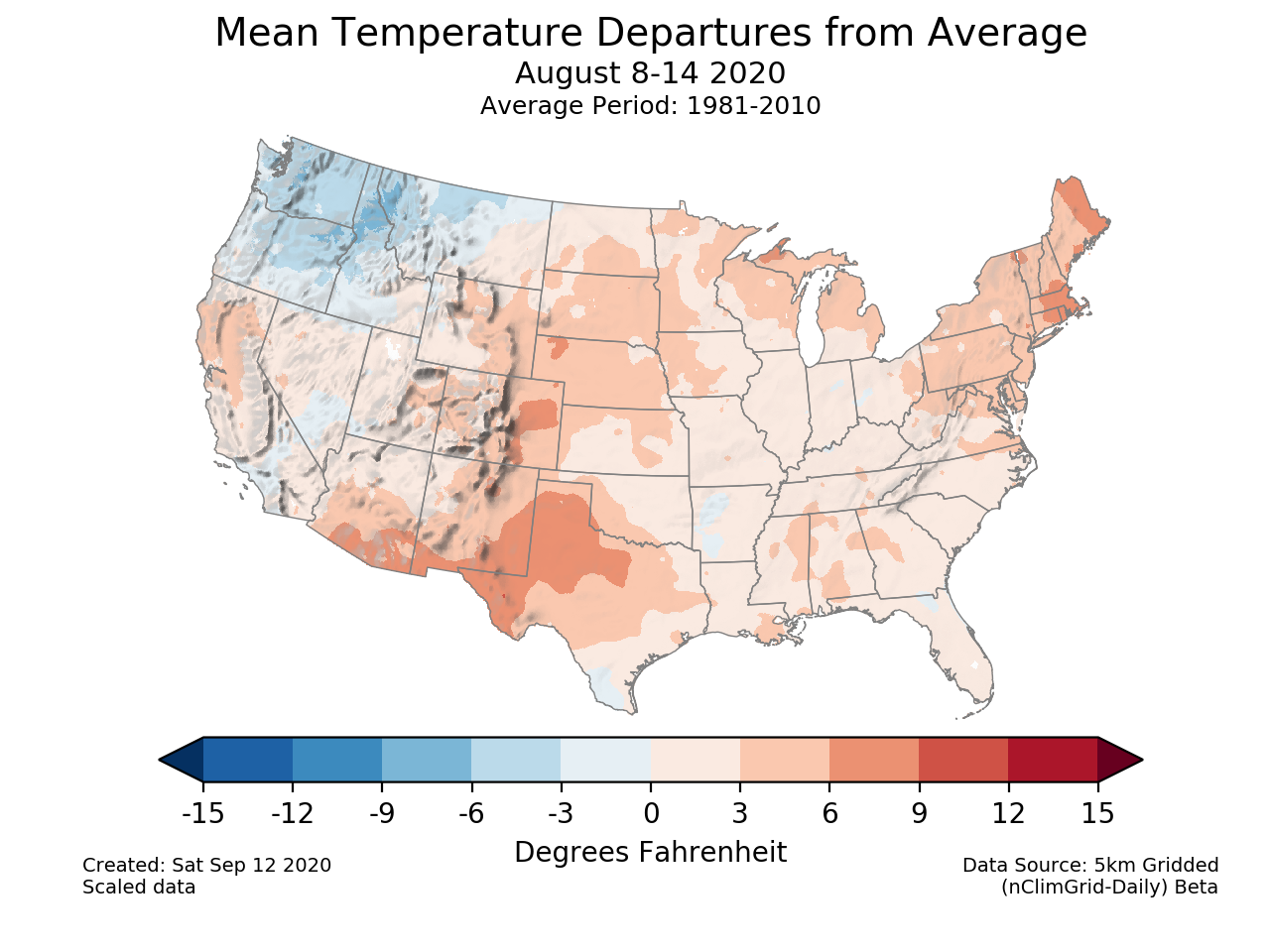 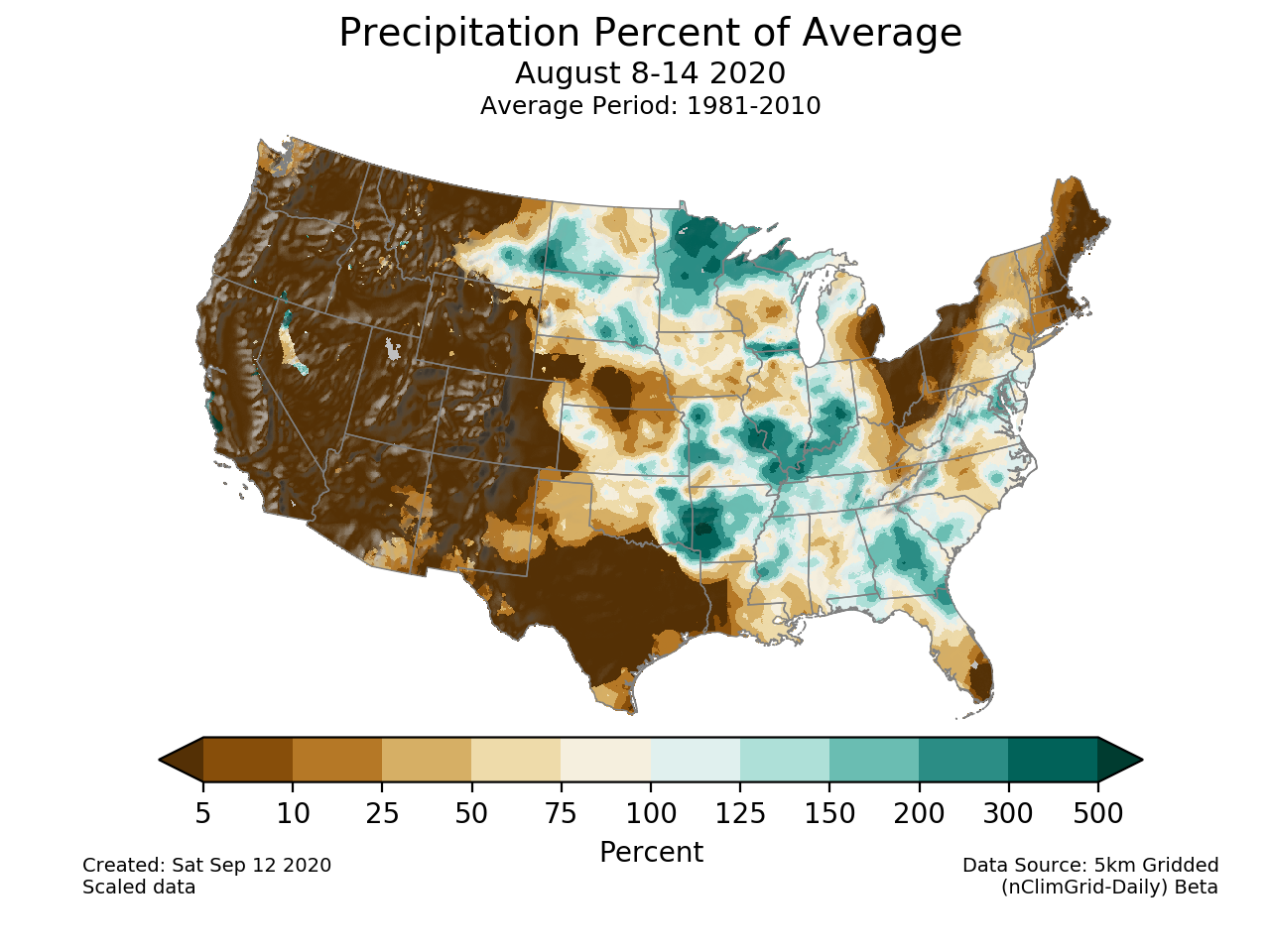 The trough in the Gulf of Alaska shifted eastward to western Canada during August 8-14. It brought cooler temperatures to the Northwest, but it was too far north to bring any needed moisture to the western U.S. The ridge also shifted eastward, perhaps in response to a positive WPO. The warmest temperature anomalies were near western Texas and New England. 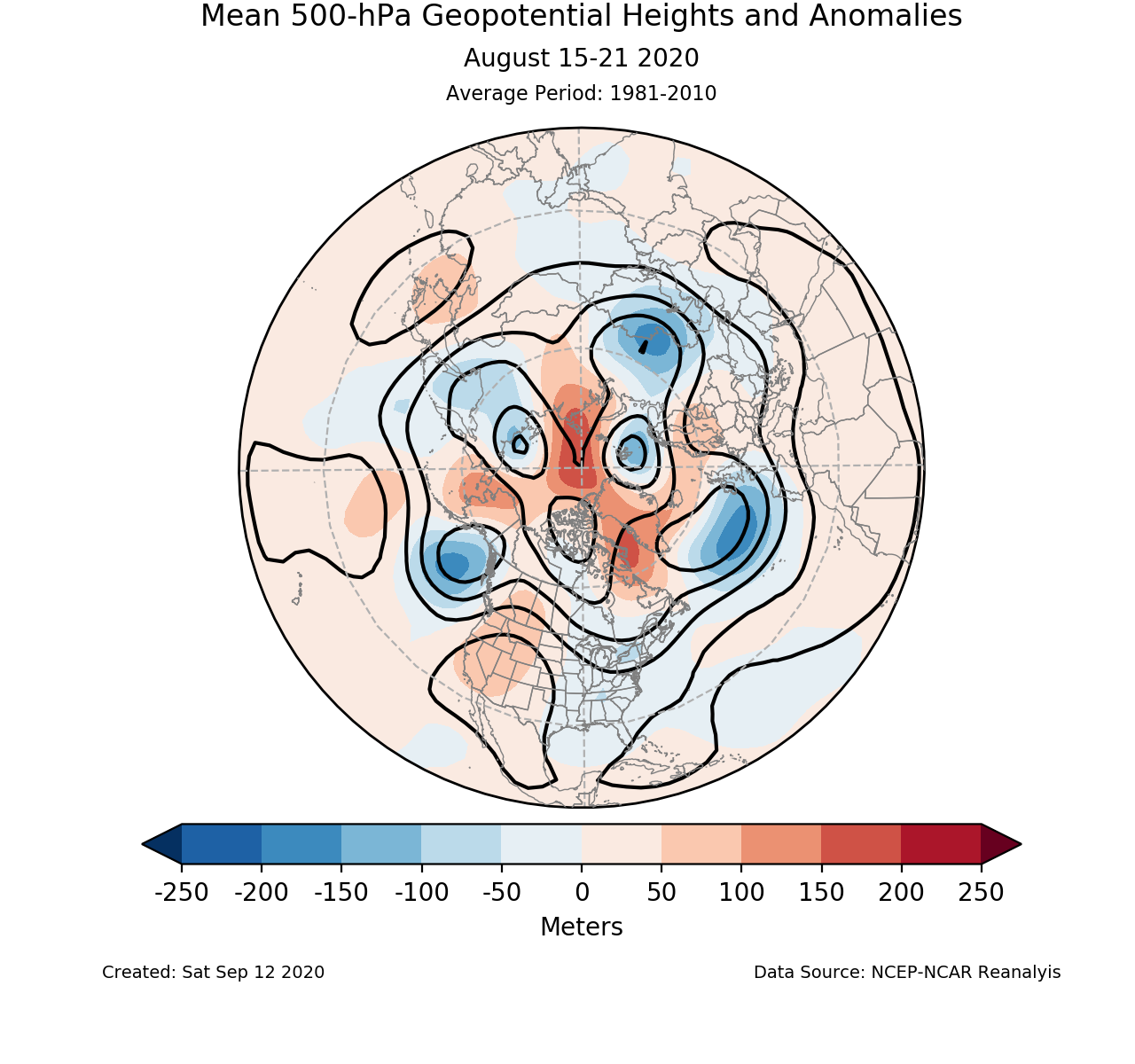 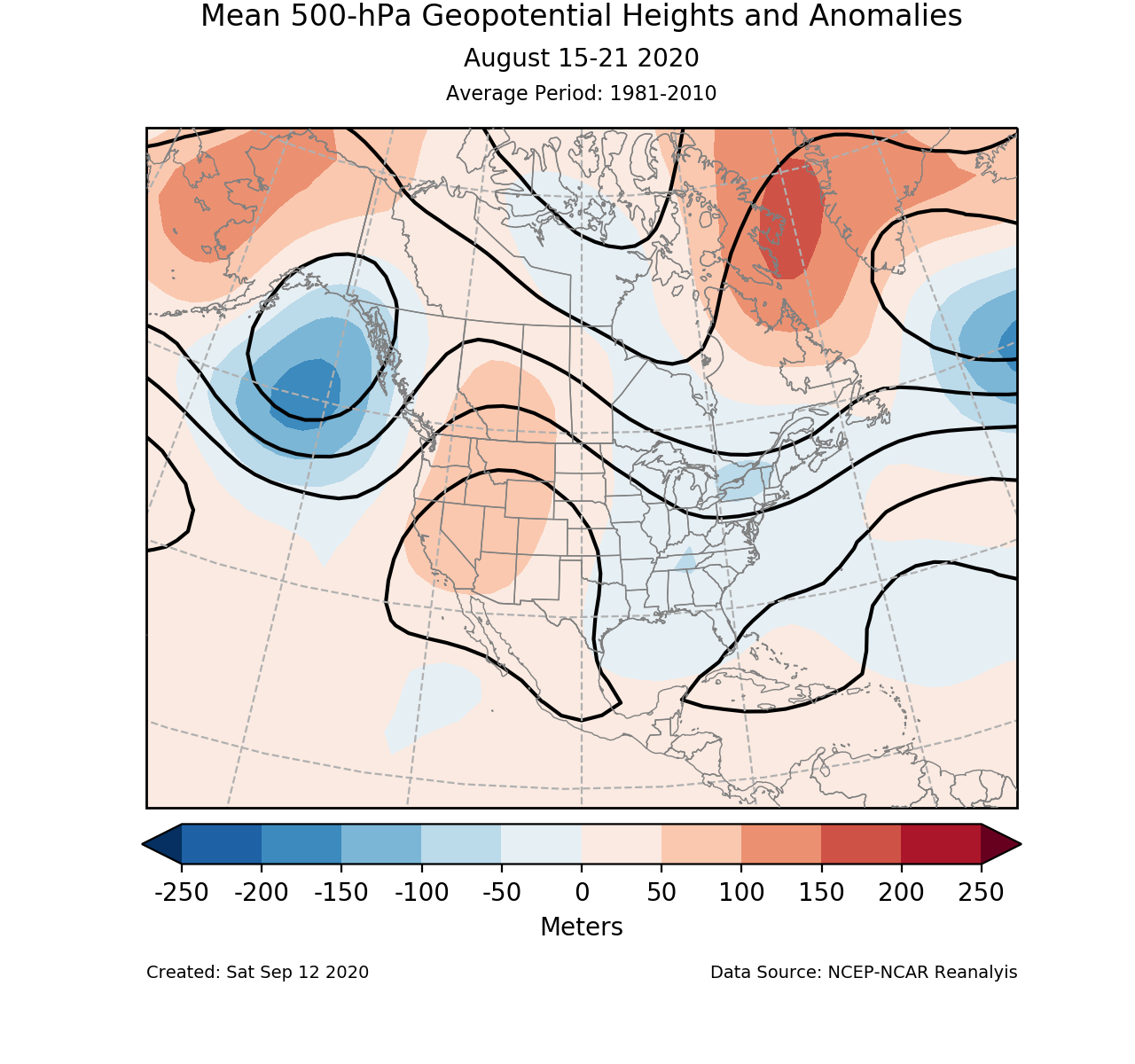 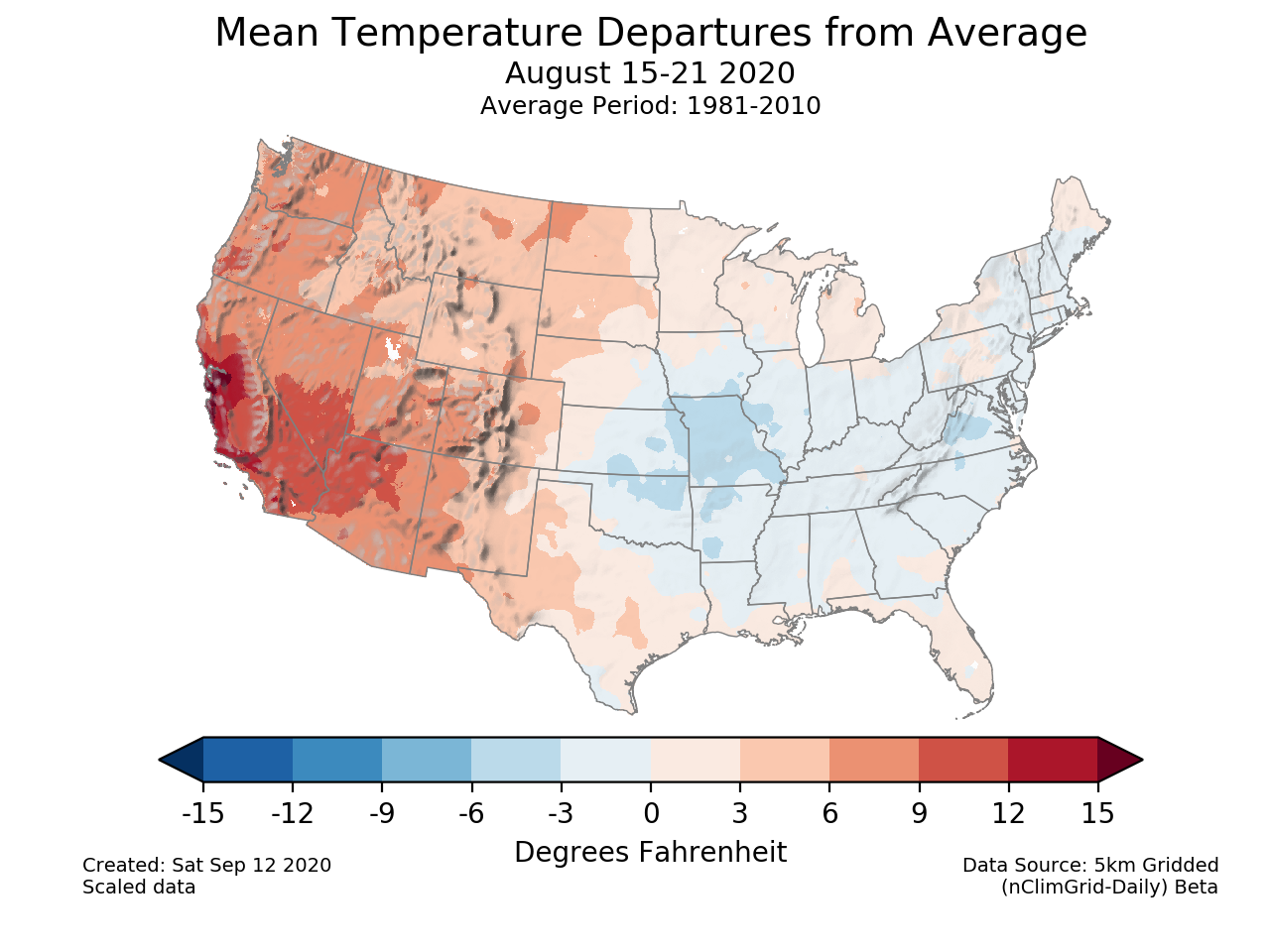 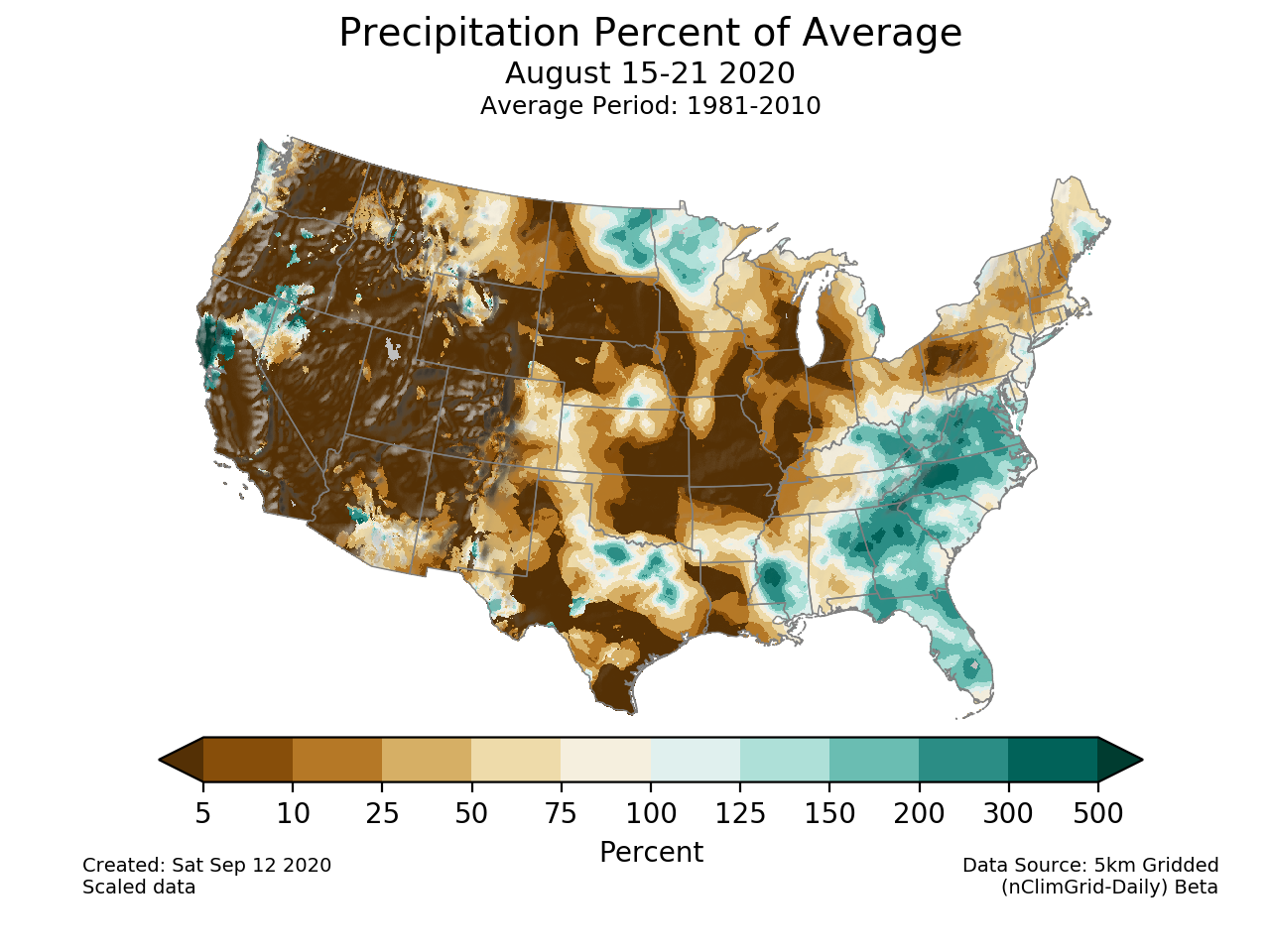 The positive PNA pattern was the primary driver again during August 15-21. The western ridge was strongest and farthest south during this period, which led to intense heat for the Southwest. Parts of Central California were more than 15°F above normal during this period, which exacerbated ongoing fires in the region. It also contributed to the high temperature of 130°F in Death Valley. If verified, this would be warmest August temperature on record and the third-warmest temperature on record for any month across the U.S. The trough in the East was associated with milder temperatures there, as well as anomalously wet conditions over the Southern Atlantic Coast. 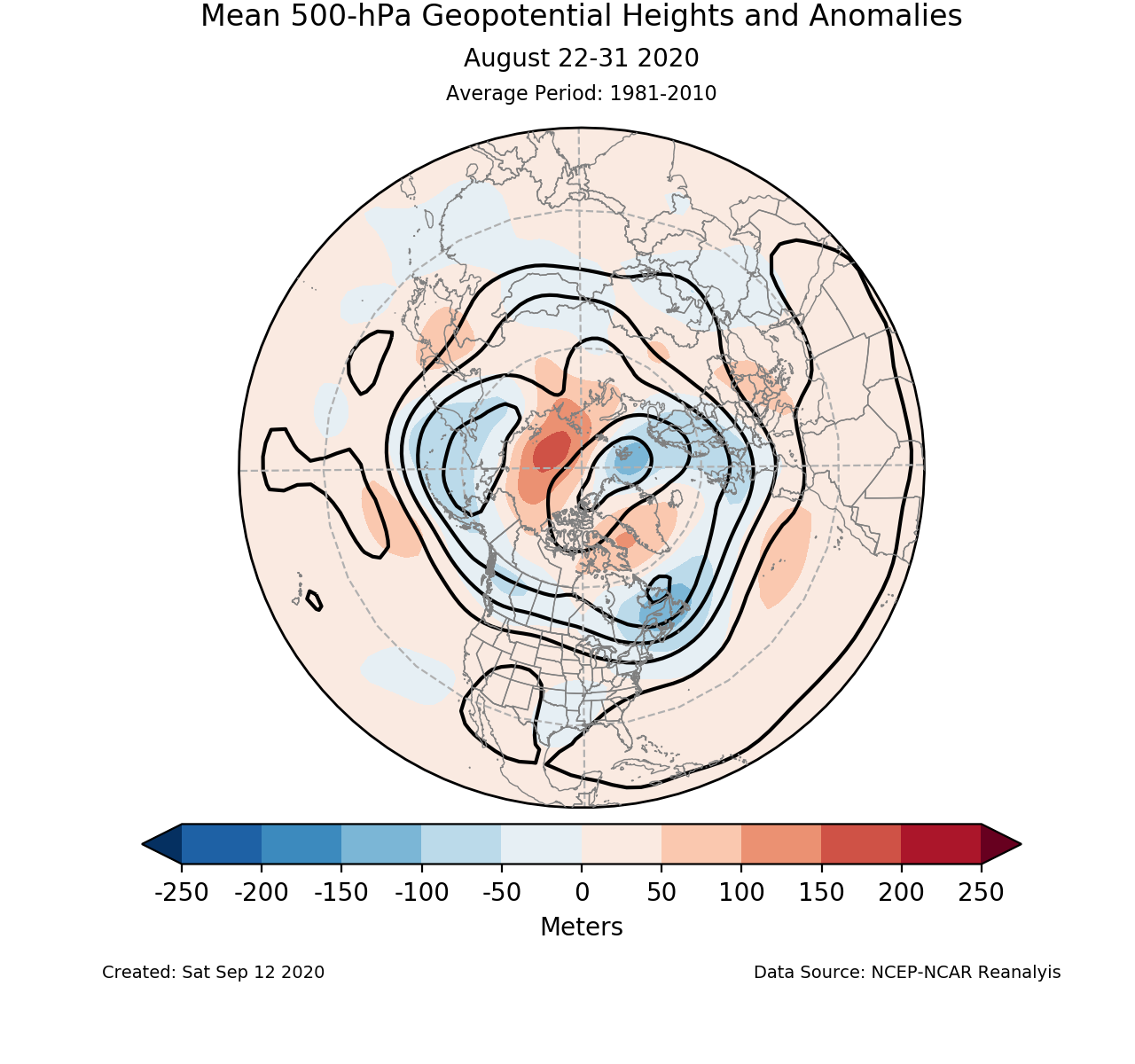 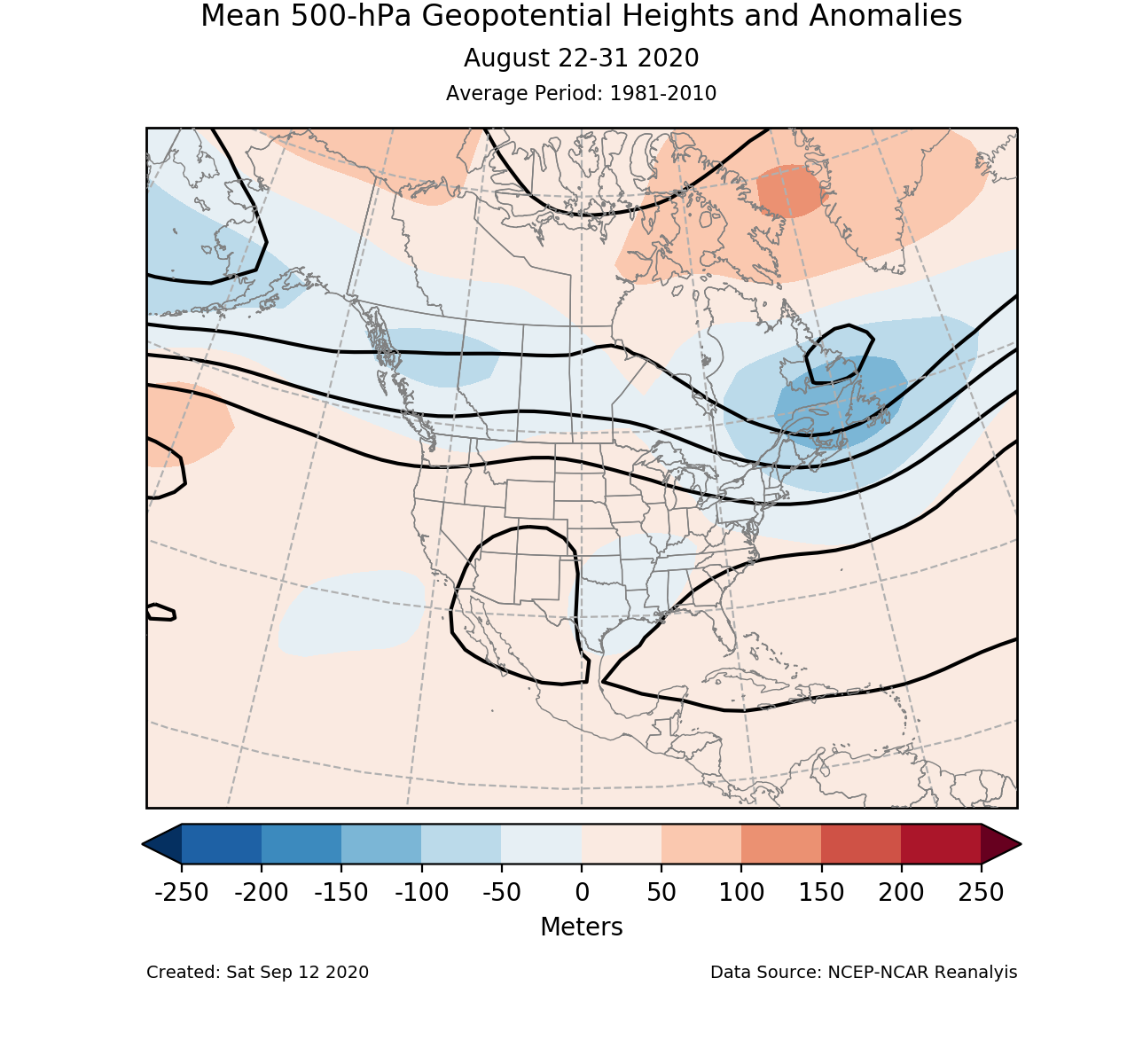 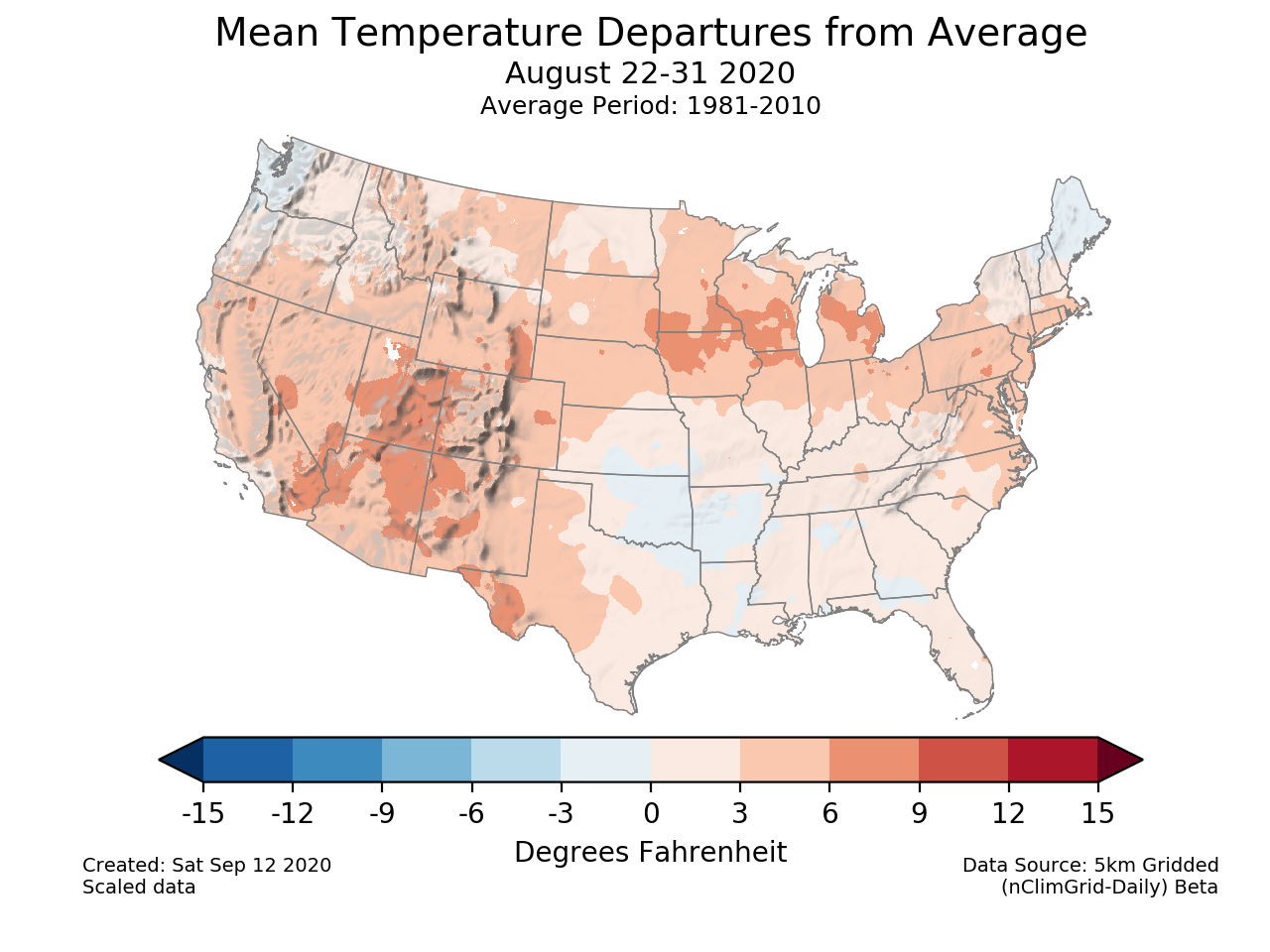 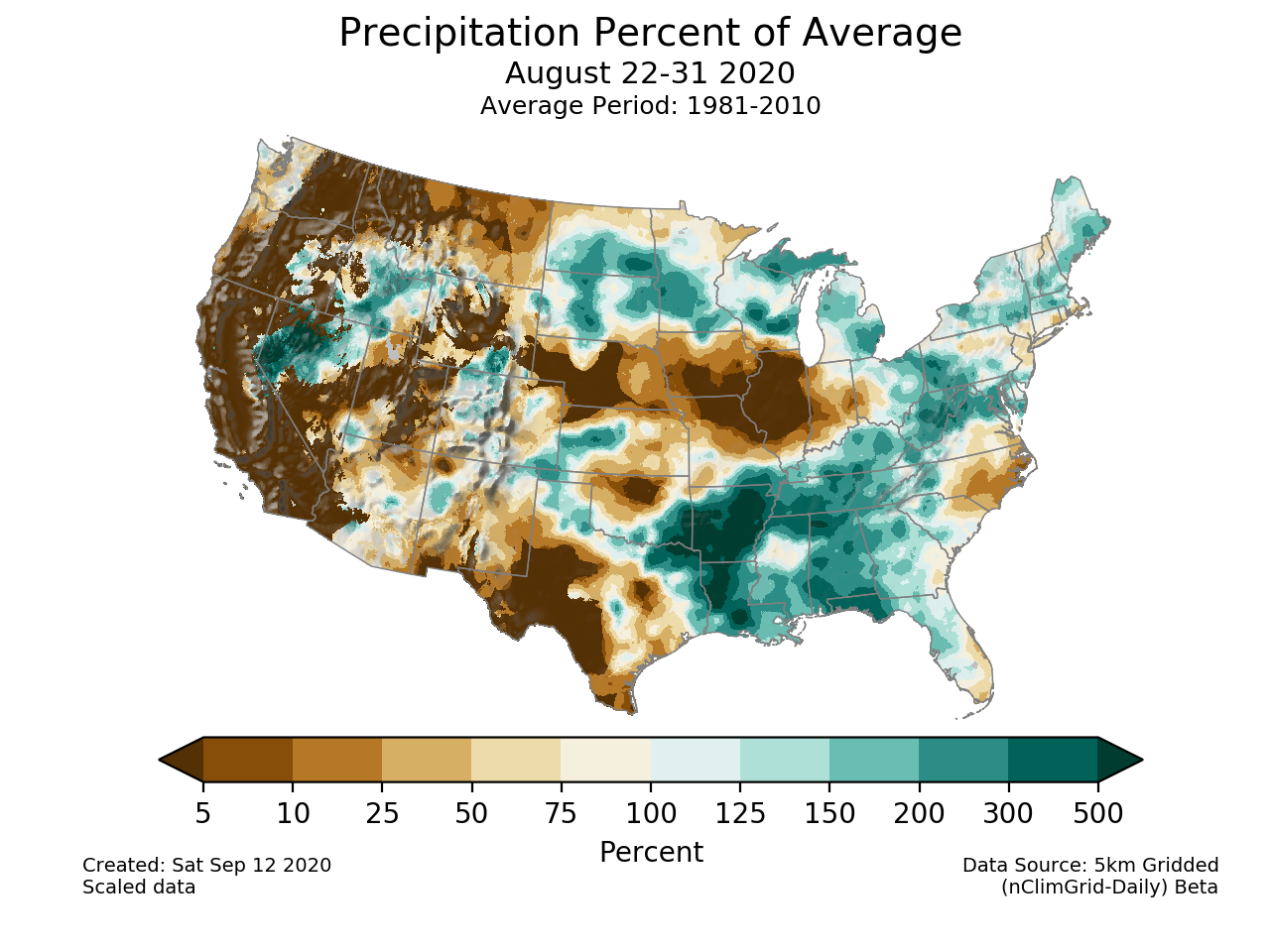 The positive PNA strengthened again towards the end of August even if the pattern was somewhat weaker when averaged over August 22-31. It continued to fuel warmer than normal temperatures in the West, particularly for the Southern Rockies. Some much needed precipitation fell over portions of the Rockies, although California remained mostly dry. Above normal temperatures and precipitation were also observed around the Upper Mississippi Valley. Meanwhile, the Lower Mississippi received deluges from the back-to-back landfalls of Hurricanes Marco and Laura in Louisiana on August 24 and 27, respectively. 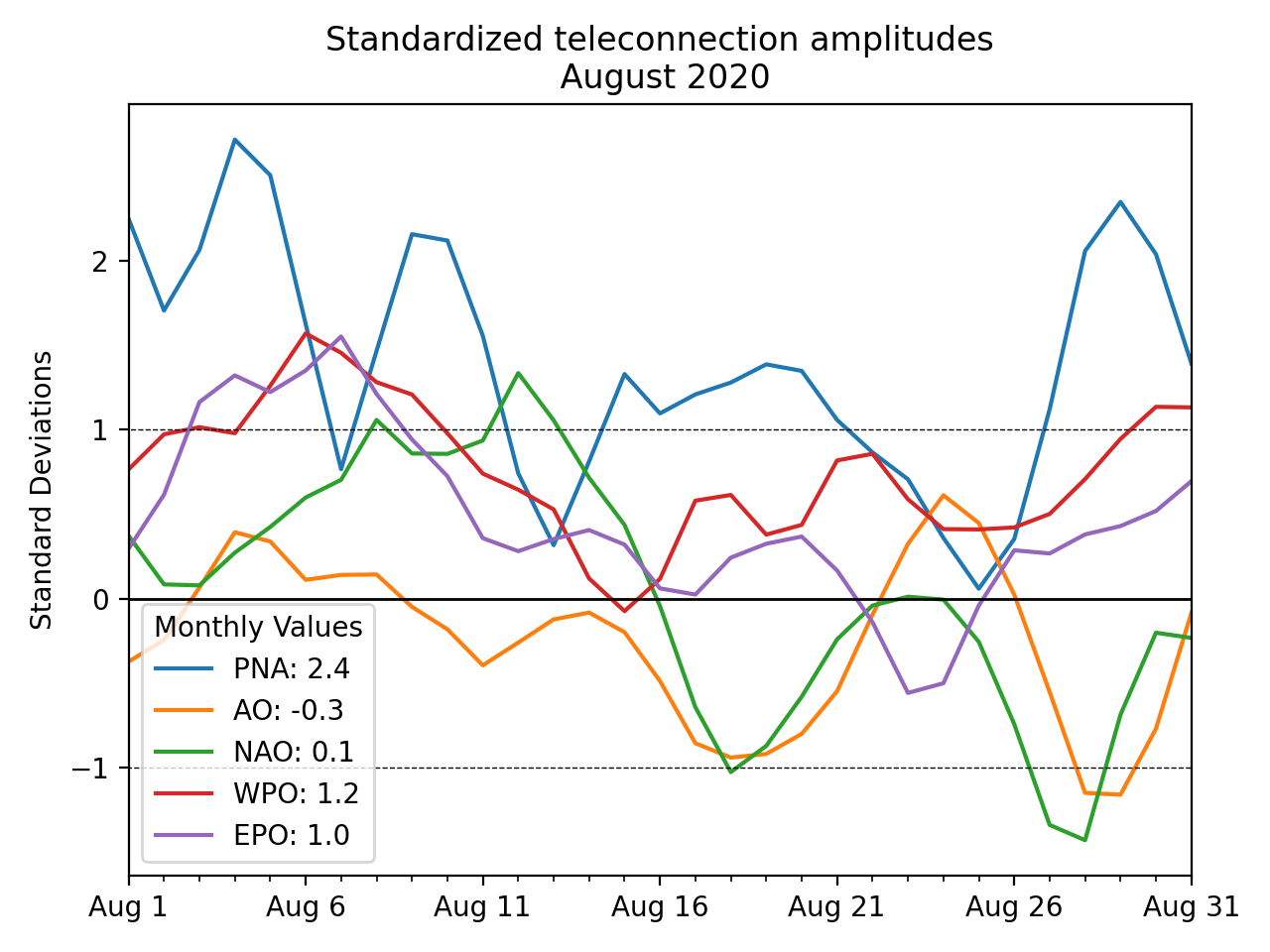