The synoptic pattern in June 2019 was dominated by a ridge in the Northeastern Pacific and a trough over the Northern Midwest. The ridge was associated with record heat and dry conditions in Alaska and the West Coast. Meanwhile the trough was associated with severeweather and flooding around the Ohio Valley and Lower Mississippi. The trough was also associated the moderately below normal temperatures across much of CONUS.

The circulation was associated with a series of atmospheric waves extending across the North Pacific, consistent with the positive phase of the East Pacific-North Pacific (EP-NP) pattern. A moderately negative Arctic Oscillation (AO) played a role in reducing the strength of the jet stream and fostering this wavy pattern. Meanwhile, the Pacific–North American (PNA) modulated the pattern, which shifted eastward around June 7 and again around June 23. The moderate El Niño conditions continued over the Pacific Ocean, but their amplitude declined under the influence of an upwelling Kelvin wave. El Niño teleconnections are weaker during the summer, so it is not surprising that they did not really manifest themselves during June 2019. 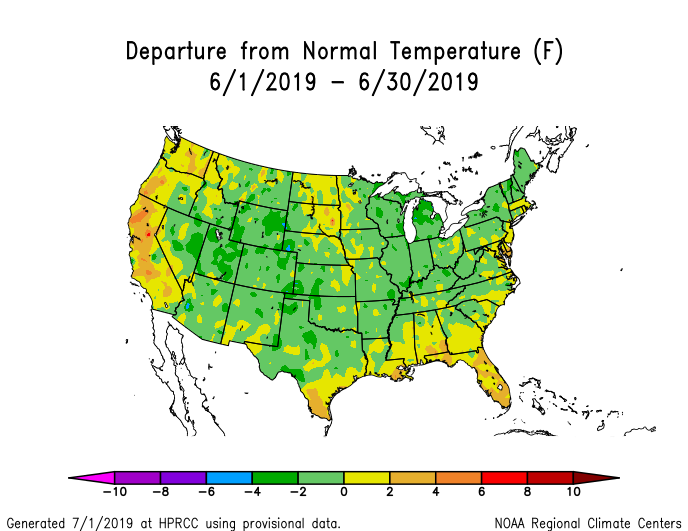 Temperature anomalies (departure from normal) for the CONUS for June 2019 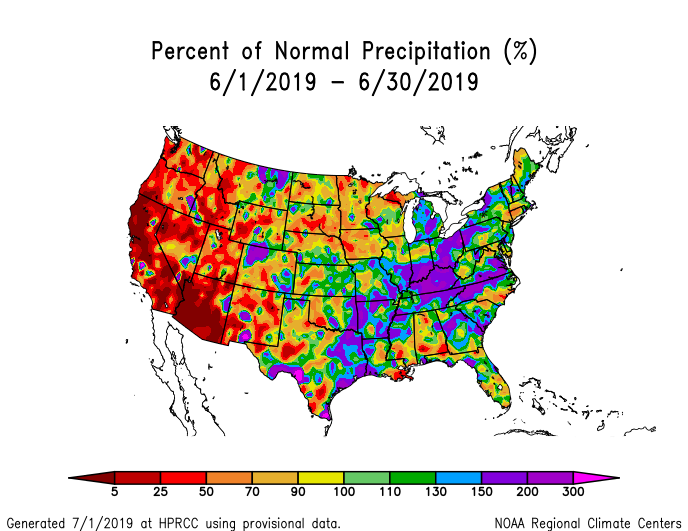 Precipitation anomalies (percent of normal) for the CONUS for June 2019

Animation of daily upper-level circulation for the month

Animation of daily surface fronts and pressure systems for the month 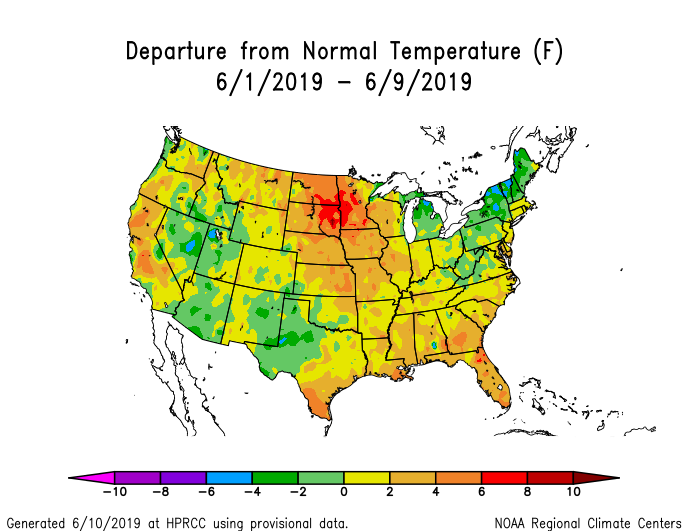 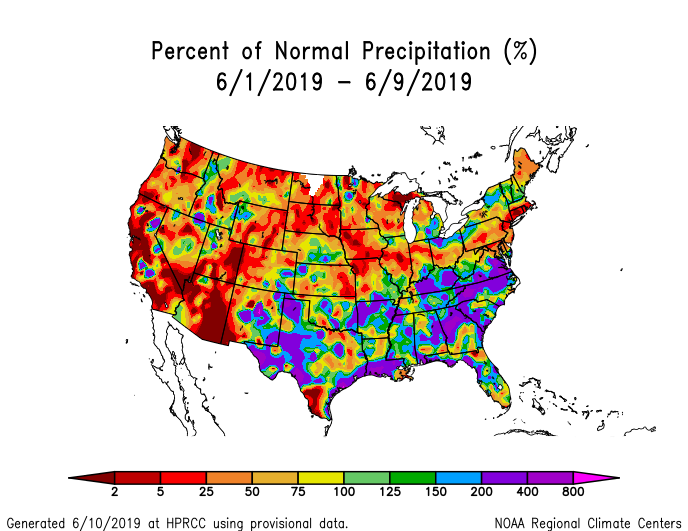 June began with a propagating pattern. A ridge moved across the northern CONUS from the Pacific Northwest towards the Great Lakes. This ridge produced anomalously hot and dry conditions along the West Coast and the Northern Plains. Meanwhile, a trough moved from the Great Lakes northeastward to the Canadian Maritimes. It brought moderately cooler temperatures to the Northeast and wetter conditions to the Southeast. 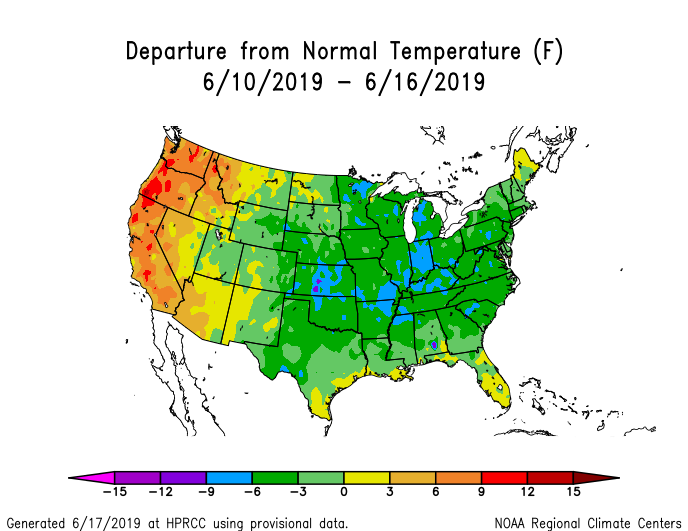 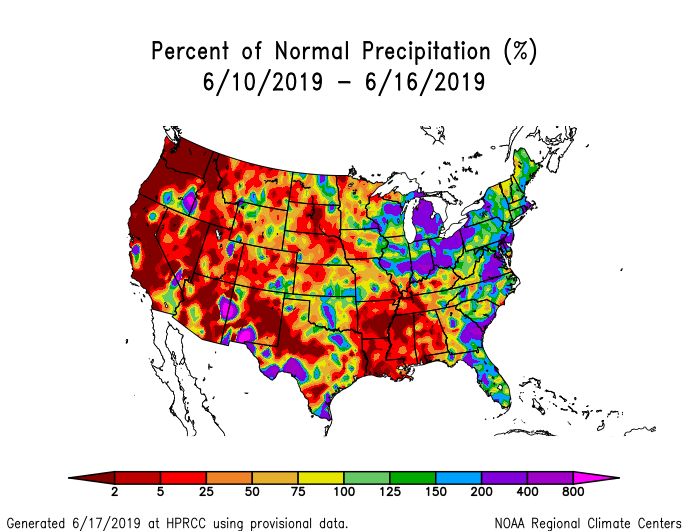 The ridge established itself near the coast of Washington and British Columbia around June 10. It produced extreme heat all along the West Coast, including San Francisco experiencing just its second 100°F day in its history. Meanwhile, the downstream trough brought slightly cooler than average temperatures across most of the country east of the Rockies. 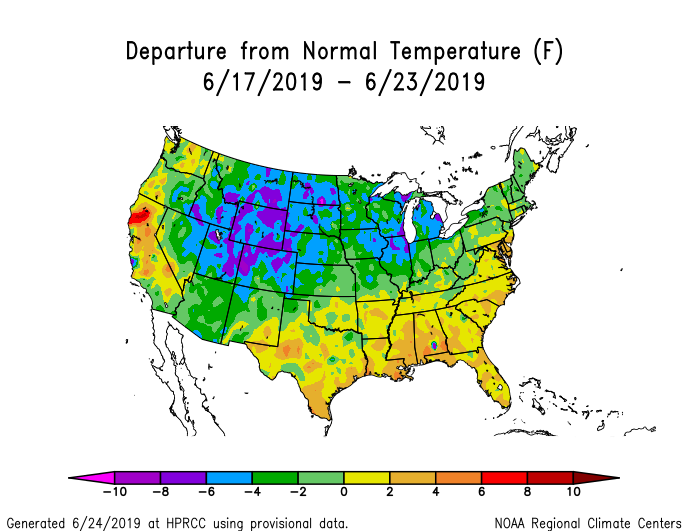 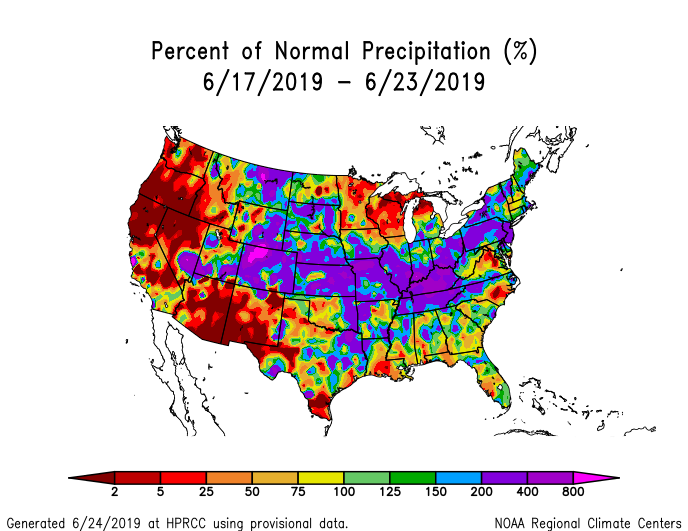 The ridge and trough strengthened and moved westward during June 17–23. The West Coast remained warmer than normal, but the heat was tempered by the ridge moving farther off the coast. The trough brought cooler than normal temperatures to the northern and central Rockies, which led to more than a foot of snow to portions of the region. The other side of the trough brought severe weather and flash flooding to Pennsylvania, New Jersey, Ohio, and Illinois. 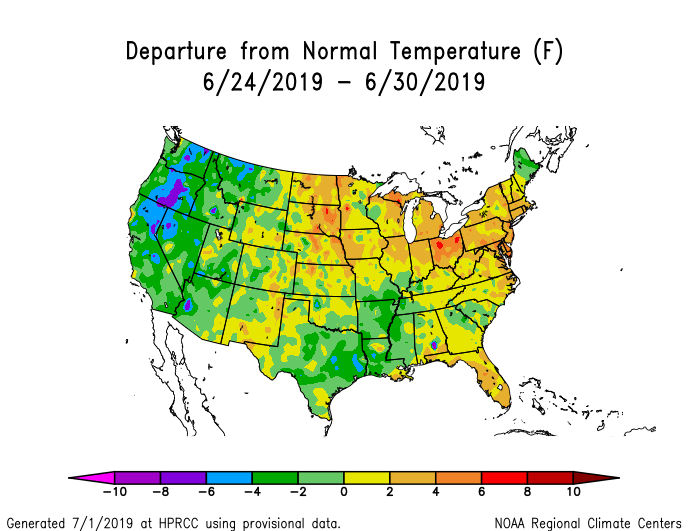 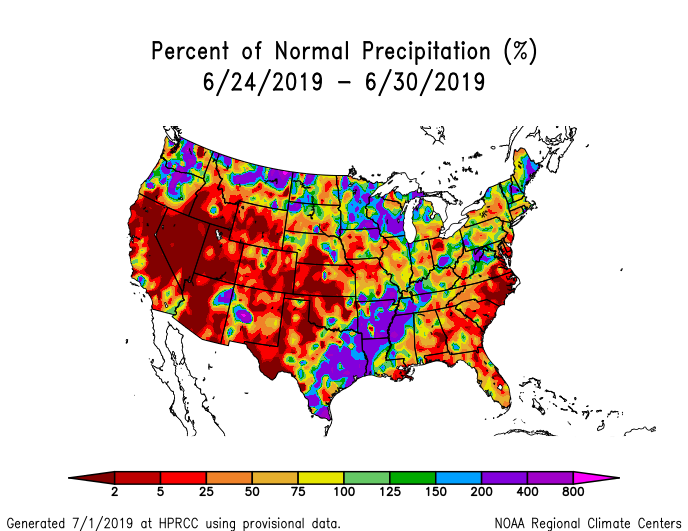 The trough continued moving westward during the final week of June. It brought relief to the West Coast in the form of cooler than normal temperatures. However, the associated moisture was confined to Washington and Oregon. The southwest remained dry, which is typical during June. A week ridge developed over the Northern Midwest during the final days of the month. It brought hotter than normal temperatures across the region and to the Northeast.

NOAA National Centers for Environmental Information, State of the Climate: Synoptic Discussion for June 2019, published online July 2019, retrieved on May 27, 2020 from https://www.ncdc.noaa.gov/sotc/synoptic/201906.