March is the first month of the Northern Hemisphere's climatological spring (March-May) and usually is a period of transition for the atmospheric circulation — the circumpolar vortex contracts to the north with warm southerly air masses beginning to dominate over cold northerly air masses. During March 2013, however, the polar jet stream (which marks the edge of the circumpolar vortex and the boundary between the cold polar air masses to the north and the warmer sub-tropical air masses to the south) was well entrenched over the eastern United States in association with a strong negative Arctic Oscillation. This pattern reduced the occurrence of severe weather, with the preliminary tornado count below normal for the month, but funneled cold air masses into the country east of the Rockies while keeping the western U.S. generally warmer than normal. Weather systems moving in the

very active jet stream flow combined with the frigid air to produce abundant snowfall, resulting in above-average national snow coverage for March. A few weather systems moved through the upper-level ridge over the western U.S., but for the month as a whole, the West averaged drier than normal. A few areas east of the Rockies were wetter than normal, but the precipitation that fell shrank drought areas in the Midwest and Southeast. 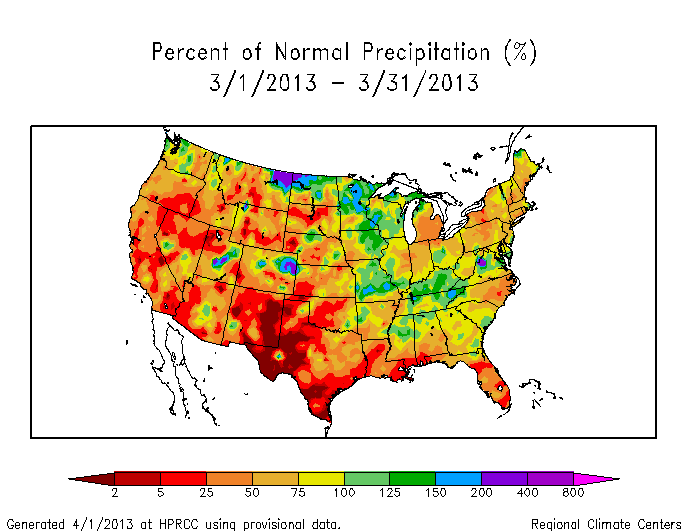 The movement of the weather systems can be seen in the weekly precipitation anomaly patterns (weeks 1, 2, 3, 4, 5). The storm track across the central part of the country brought frequent snow cover with over a hundred monthly records set by daily snowfall, mostly along the paths of heavy winter storms from the Central Plains to Midwest, while snow cover over the West was below normal for March. The month began with about 48 percent of the contiguous U.S. snow-covered; coverage gradually decreased to about 21 percent by March 16th, expanded to about 31 percent by the 19th after a snowstorm swept across the Northeast, and reached its greatest daily extent of about 49 percent on the 25th as snow cover expanded across the Rockies to Midwest. This snow cover rapidly melted, with coverage down to about 17 percent by the end of the month. Contiguous U.S. snow cover area, integrated across the month, gave March 2013 a rank of tenth biggest March coverage in the 1967-2013 satellite snow cover record. The trough east/ridge west upper-level circulation pattern, that contributed to extensive eastern snow cover, steered wet weather systems away from the West and funneled cold air masses into the eastern U.S., with the northwest flow blocking the Gulf of Mexico moisture source. Consequently, Louisiana and Wyoming ranked in the top ten driest category for March, with 27 other states falling in the driest third of the historical record. The dryness in the West and parts of the South and East gave March 2013 a rank of fifth driest March in the 1895-2013 record when precipitation is integrated across the country. Drought conditions improved in the Midwest and Southeast, where beneficial precipitation fell, worsened in the Southern Plains (where Texas had the twelfth driest March), and generally held steady elsewhere. Overall, the national (contiguous U.S.) moderate to exceptional drought footprint decreased from 54.2 percent at the end of February to 51.9 percent at the end of March (based on U.S. Drought Monitor statistics). According to the Palmer Drought Index, which goes back to the beginning of the 20th century, 48.7 percent of the contiguous U.S. was in moderate to extreme drought at the end of March, an increase of about 10 percent compared to last month. 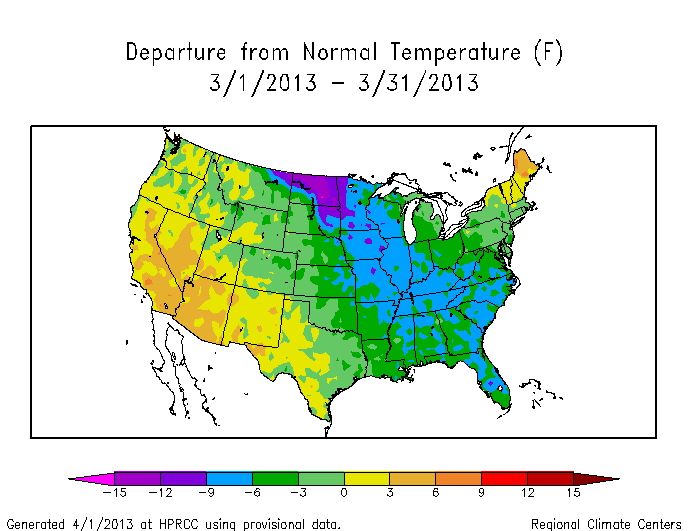 The weekly temperature anomaly maps (weeks 1, 2, 3, 4, 5) show the movement of colder-than-normal air masses from the Northern Plains to the Southeast throughout the month, reflecting the dominance of the upper-level trough and negative Arctic Oscillation. This pattern is evident in the monthly temperature anomalies, with 28 states from North Dakota to Florida ranking in the coolest third of the historical record. Eleven of those ranked in the top ten coldest category for March, and five of those states (Florida, Georgia, Alabama, South Carolina, and North Carolina) had an average March 2013 temperature that was colder than their average January 2013 temperature. In contrast, three western states (California, Nevada, and Arizona) ranked in the top ten warmest category for March. On a local basis, nearly two times as many record cold highs and lows occurred than record warm highs and lows. Over 1400 record low temperatures and about 1400 record cool daily high temperatures were tied or broken. In comparison, about 800 daily high temperature records and 800 record warm daily low temperatures were tied or broken. (These numbers are preliminary and are expected to change as more data arrive.) The persistence of much below-normal temperatures over the population centers of the east contributed to a national Residential Energy Demand Temperature Index (REDTI) for March 2013 that was above the long-term average and ranked 31st highest in 119-year record.

When averaged together, the mixture of temperature and precipitation extremes gave the U.S. the 43rd coolest and fifth driest March in the 119-year record. Averaging extremes tends to cancel them out. But when extremes are combined cumulatively, like in the U.S. Climate Extremes Index (USCEI), they may tell a different story. The national USCEI for March 2013 ranked only 37th largest (68th smallest) in spite of a large spatial extent of long-term drought conditions (fourth largest PDSI component for March) because, although widespread below-normal temperatures occurred (20th largest cool max and 24th largest cool min components), many other years have been much colder. The below-normal temperatures for March, combined with the cool start to the year, have been enough to knock the USCEI for the last 12 months out of first place, with April 2012-March 2013 ranking only 13th largest on record for April-March.

Examination of these circulation indices and their teleconnection patterns, and comparison to observed March 2013 and January-March 2013 temperature, precipitation, and circulation patterns, suggests that the AO was responsible for the temperature pattern during March, but the precipitation pattern was influenced in part by a couple other drivers. The MJO was in phase with the AO near the end of the month, and the PNA and EP-NP may have also influenced the temperature pattern in the eastern United States. Precipitation early in the month could have been influenced by the MJO, and the PNA and AO might have had some influence in some areas, but in general, precipitation is weakly correlated with these latter two patterns this time of year. ENSO, which can have significant impacts on precipitation, was neutral and, thus, not a player. The upper-level circulation pattern strongly matched that associated with a negative AO in the eastern U.S., but it seemed to match the EP-NP over the western U.S. and PNA over the North Pacific. This month illustrates how competing atmospheric drivers can result in a complex weather pattern and how, when the atmospheric circulation drivers are neutral or in a state of transition, their influence can become difficult to trace and can be overwhelmed by other competing forces, including random fluctuations in the atmosphere.

NOAA National Centers for Environmental Information, State of the Climate: Synoptic Discussion for March 2013, published online April 2013, retrieved on May 13, 2021 from https://www.ncdc.noaa.gov/sotc/synoptic/201303.