2012 was warmest and second most extreme year on record for the contiguous U.S.

2012 was a historic year for extreme weather that included drought, wildfires, hurricanes and storms; however, tornado activity was below average

2012 marked the warmest year on record for the contiguous United States with the year consisting of a record warm spring, second warmest summer, fourth warmest winter and a warmer-than-average autumn. The average temperature for 2012 was 55.3°F, 3.2°F above the 20th century average, and 1.0°F above 1998, the previous warmest year.

The average precipitation total for the contiguous U.S. for 2012 was 26.57 inches, 2.57 inches below average, making it the 15th driest year on record for the nation. At its peak in July, the drought of 2012 engulfed 61 percent of the nation with the Mountain West, Great Plains, and Midwest experiencing the most intense drought conditions. The dry conditions proved ideal for wildfires in the West, charring 9.2 million acres — the third highest on record.

The U.S. Climate Extremes Index indicated that 2012 was the second most extreme year on record for the nation. The index, which evaluates extremes in temperature and precipitation, as well as landfalling tropical cyclones, was nearly twice the average value and second only to 1998. To date, 2012 has seen 11 disasters that have reached the $1 billion threshold in losses, to include Sandy, Isaac, and tornado outbreaks experienced in the Great Plains, Texas and Southeast/Ohio Valley. 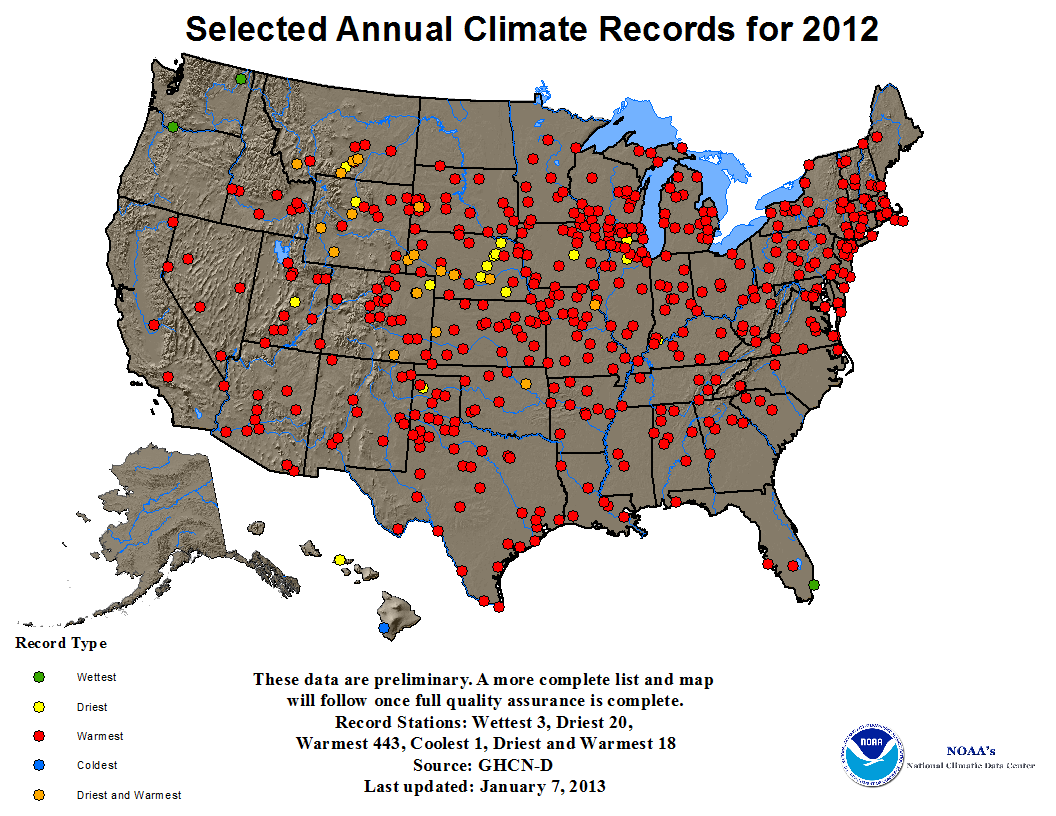 Note: The Annual Climate Report for the United States has several pages of supplemental information and data regarding some of the exceptional events 2012.

Each season of 2012 had precipitation totals below the 20th century average:

Significant weather and climate events for 2012.
Click image to enlarge, or click here for the National Overview.