Several warm periods across the contiguous U.S. during April brought the national average temperature to 55°F, 3.6°F above average, marking the third warmest April on record. These temperatures, when added with the first quarter and previous 11 months, calculate to the warmest year-to-date and 12-month periods since recordkeeping began in 1895.

On the heels of the warmest March for the U.S., warmer and drier than average temperatures continued for much of the nation with some states in the Ohio Valley having a small, but still above average, dip in temperatures.

Note: The April 2012 Monthly Climate Report for the United States has several pages of supplemental information and data regarding the unprecedented early 2012 temperatures. 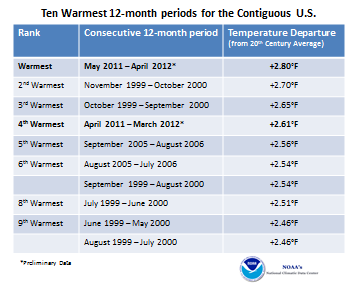