Fourty-four percent of the contiguous U.S. (CONUS) was covered by snow at the beginning of January according to NOAA's National Snow Analysis. Snow blanketed much of the Sierra Nevada, Cascade and Rocky Mountain ranges as well as the northern and central Plains, Great Lakes, the Northeast and portions of the Deep South and Ohio Valley. During the second week of January, a powerful winter storm traversed the Pacific Northwest and brought strong winds, heavy snow and blizzard warnings to the northern Rockies and High Plains. Through January 12, Snoqualmie Pass in Washington State received a total of 236 inches of snowfall for the season-to-date — their largest season-to-date snowfall total in the last 10 years. Warmer temperatures in the middle of the month caused snow to melt, bringing the CONUS coverage to approximately 24 percent on January 15 and yielding the minimum CONUS snow cover for the month of January. A trough of low pressure plunged into the central U.S. the last week of the month bringing snowfall as far south as northern Georgia. On January 28, snow covered much of the western mountains and from the central Plains to the Great Lakes and into the Northeast. Snow also blanketed a portion of the mid-Mississippi and Ohio valleys as well as portions of the Appalachian range. In addition, an atmospheric river event brought several feet of snow to the Sierra Nevada range from January 27-29 as well as lesser amounts to some of the southern California ridges and valleys. This increased CONUS snow coverage to nearly 55 percent — the maximum extent for the month. By the end of January, snow coverage waned to about 43 percent of the CONUS, as the Northeast prepared for a nor'easter storm that brought one to three feet of snow from central Pennsylvania to New York City and into New England from January 30 to February 3. 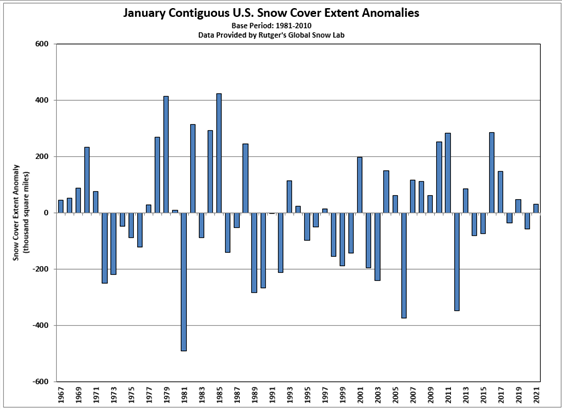 According to NOAA data analyzed by the Rutgers Global Snow Lab, the January snow cover extent was approximately 1.4 million square miles, 29,344 square miles above the 1981-2010 average. This was the 28th largest value in the 55-year satellite record. Above-average snow cover was observed across much of the Great Lakes and Northeast as well as portions of the northern and southern Plains. Below-average snow cover was observed over much of the northern Rockies, central Plains and parts of the Cascades and Sierra Nevada range. 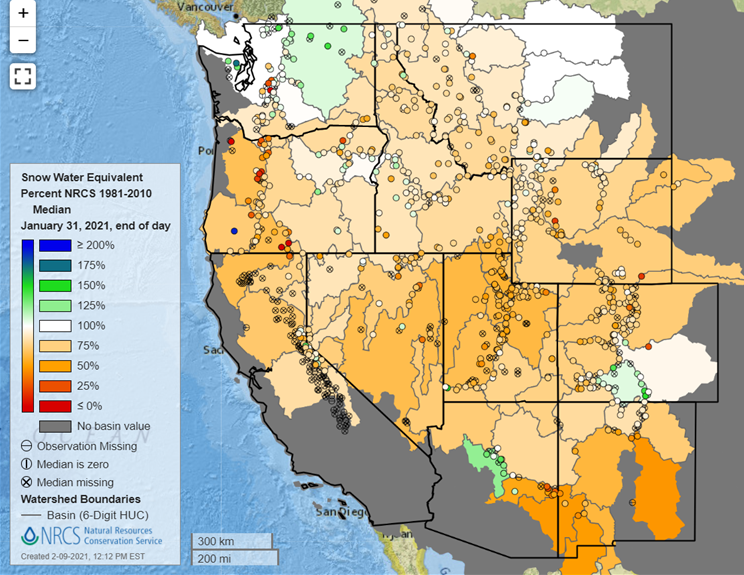 Melting of winter and spring mountain snowpack provides a crucial summer water source across much of the western United States. The total annual water budget for agriculture and human use in the mountainous West is highly dependent on the amount of snow melt that will occur in spring and is proportional to the amount of snow on the ground, which can be approximated by a measure of the snow water equivalent (SWE). On December 31, SWE values from the Sierras to the Cascades and parts of the northern Rockies dropped to 75 percent to 100 percent of median. Much of the Great Basin and the central and southern Rockies had SWE values that remained at or below 75 percent of median at the end of December. By the end of January, SWE values were near- to above-normal across parts of the Cascades as well as portions of the northern and central Front Range. Below-average SWE values blanketed most of the West from the Coastal Ranges to the Sierra Nevada Range and across much of the Rocky Mountains and the Great Basin. 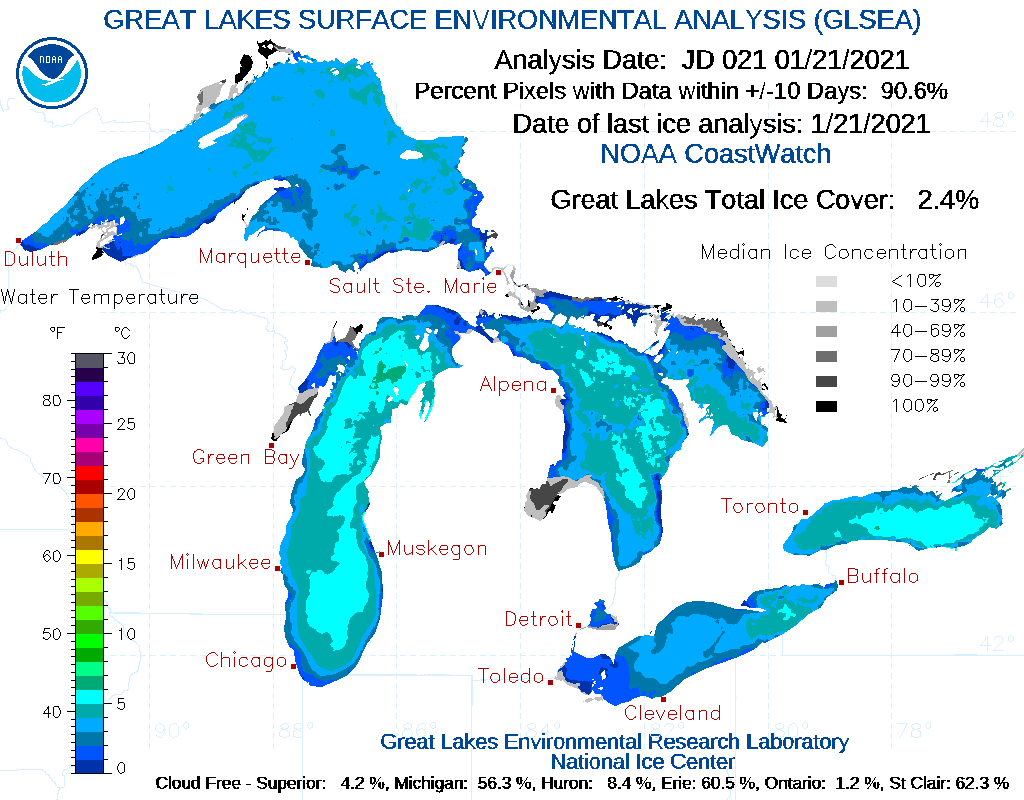 Temperatures for December 2020 and January 2021 across the Great Lakes states were typically 3°F to 9°F above the long-term mean. This contributed to warmer-than-average surface water temperatures across the Great Lakes and inhibited ice formation along the surface of the lakes. On January 21, only 2.4 percent of the entire lake surface was covered by ice. This is the lowest amount of ice coverage for this date in the last 48 years. Peak ice coverage is expected to span only 30 percent of the lake surface sometime from mid-February to early March. Average peak ice coverage is around 53 percent.

The map depicted above illustrates the ice cover over the southern portion of Green Bay and most of Saginaw Bay on January 21. Near-freezing water temperatures are evident for the remainder of Green Bay, western Lake Erie and near the shore line for most of the other Great Lakes. That means with a few days of below-freezing temperatures, an increase in lake ice coverage would be possible. In fact, a mass of dense, cold air, associated with a dip in the polar vortex, descended into the Great Lakes in early February. Temperatures across the Great Lakes were well below average during this time. By February 7, lake ice covered approximately 18 percent of the Great Lakes surface and was continuing to expand.