February began with approximatly 36 percent of the contiguous U.S. (CONUS) covered by snow according to NOAA's National Snow Analysis. Snow covered many of the western mountain locations including the Rockies, Cascades and Sierra Nevada ranges. Snow also blanketed much of the northern Plains, the upper and middle Mississippi Valley, Great Lakes and northern portions of the Northeast. Following the passage of a strong cold front, additional snow blanketed the CONUS from west Texas to the southern Great Lakes, increasing the coverage to almost 43 percent on February 6. Some of the coldest air of the season was felt across the northern Plains and Great Lakes during mid-February with overnight temperatures 20 to 35 degrees below average. This cold air was ushered in by a cold front on February 13, bringing new snow accumulations from the central Plains to the Ohio Valley and into the Northeast. This increased the overall snow cover to 44 percent of the Lower-48 — the maximum extent of snow cover for the month. By February 24, above freezing temperatures brought snow cover to its monthly minimum at 26.2 percent. Yet another strong low pressure system and accompanying cold front brought cooler temperatures as far south as the Southeast and lake effect snowfall to parts of the Great Lakes over the last few days of the month, raising the overall snow cover slightly by the end of the month. 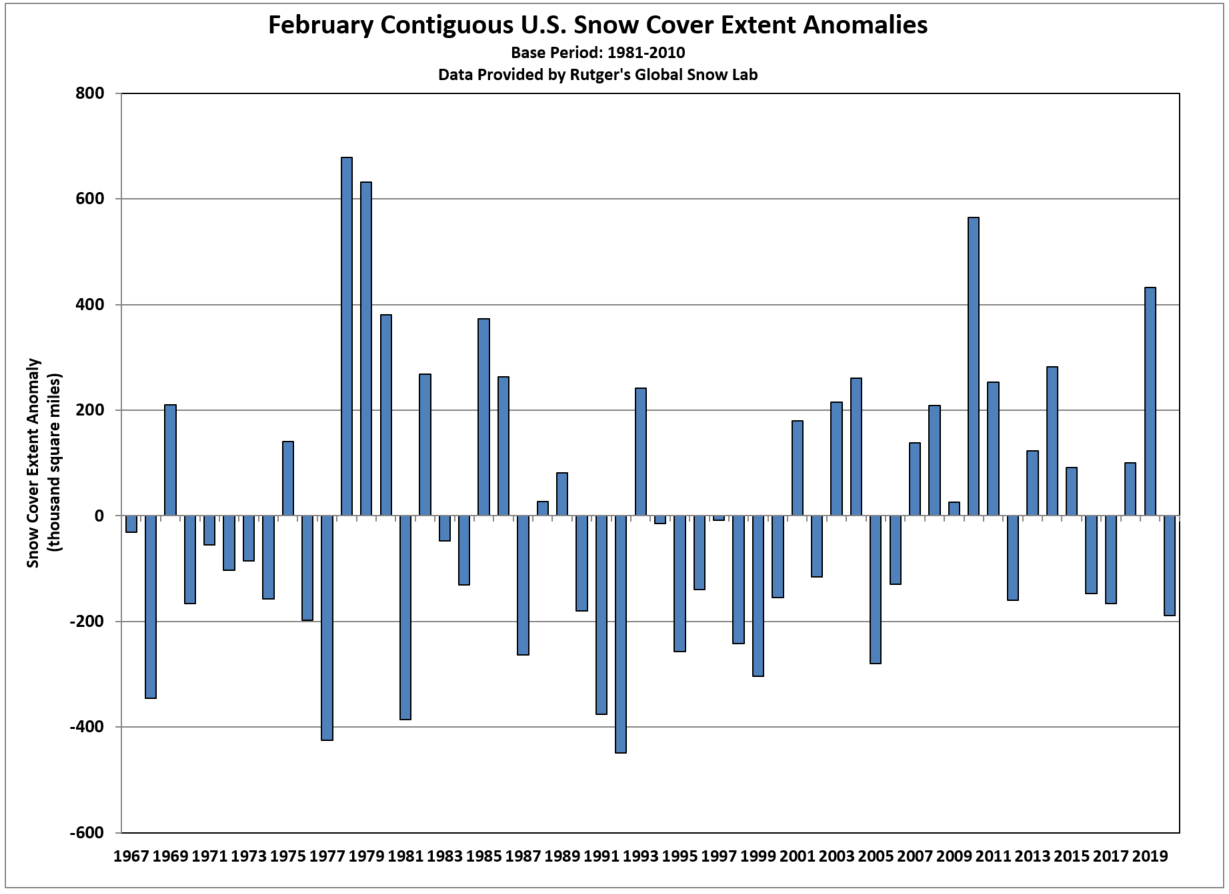 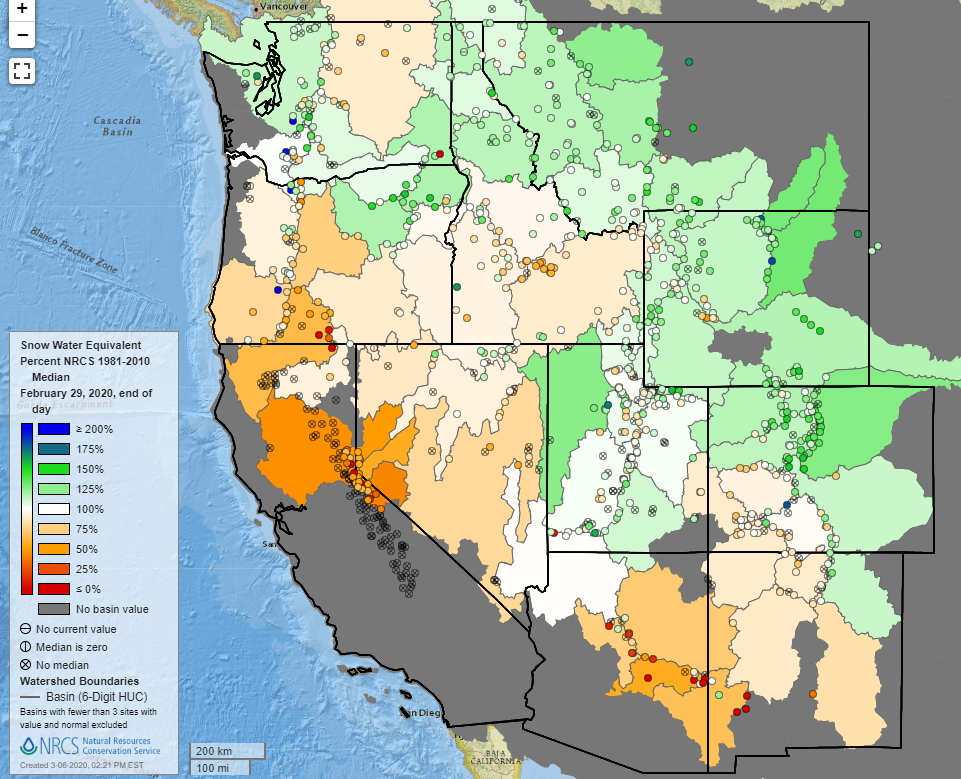 Melting of winter and spring mountain snowpack provides a crucial summer water source across much of the western United States. The total annual water budget for agriculture and human use in the mountainous West is highly dependent on the amount of snow melt that will occur in spring and is proportional to the amount of snow on the ground, which can be approximated by a measure of the snow water equivalent (SWE). On January 31, SWE values were near- to above-normal across much of the Southwest, northern and central Rockies as well as parts of the Great Basin and eastern Oregon. Below-average SWE values existed across the northern Sierra Nevada Range, much of the Pacific Northwest as well as parts of the southern Great Basin. By the end of February, SWE values were near- to above-normal across much of the central and northern Rockies and parts of the northern Cascades. Basins-wide statistics across the Sierra Nevada range, southern Cascades, the Great Basin and the southern Rockies had SWE values which were as low as 50 percent of the median value for this time of year. 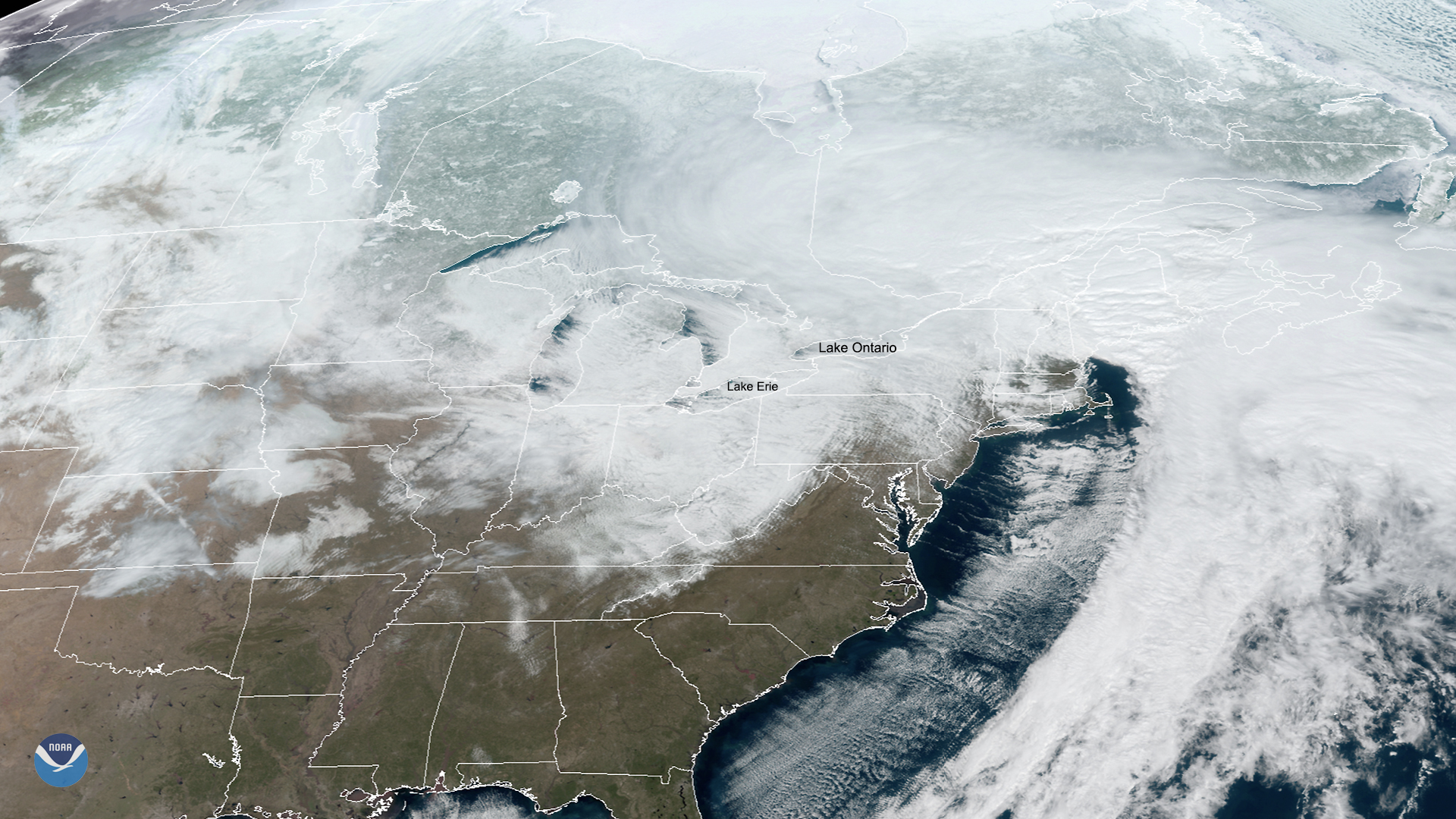 Winter temperatures across the Great Lakes states were on average 4 °F to 8°F above the long-term mean. As mentioned in the January snow report, Great Lakes ice cover is well-below average for this time of year, making significant late-season lake-effect snowfall events possible. In late February, a strong low pressure system and associated cold front pushed its way across the Great Lakes and into the Southeast, bringing cold air and strong winds behind it. It can be seen from the February 27, 2020 visible satellite image to the left that the cold front was positioned off the Southeast coast over the Atlantic Ocean. The clouds trailing behind the front were created by cold air lifting moisture off of the relatively warm ocean surface and generating a cumlulus cloud field. Across the Great Lakes, lake-effect snowfall was occurring in parts of the Uppper Peninsula of Michigan, the northern Lower Peninsula of Michigan, east of Lake Erie and east of Lake Ontario. Strong westerly winds made it possible for moisture to be lifted along the entire length of Lake Ontario, over the course of several days, resulting in two to four feet of snowfall across parts of the Tug Hill Plateau of upstate New York. Carthage, New York, received 48 inches of snowfall from February 27-29, while Croghan and Redfield observed 42.5 inches and 31.2 inches, respectively. Other communities south of Buffalo received between one and two feet of snow from this event and lesser amounts across the Upper Peninsula of Michigan. 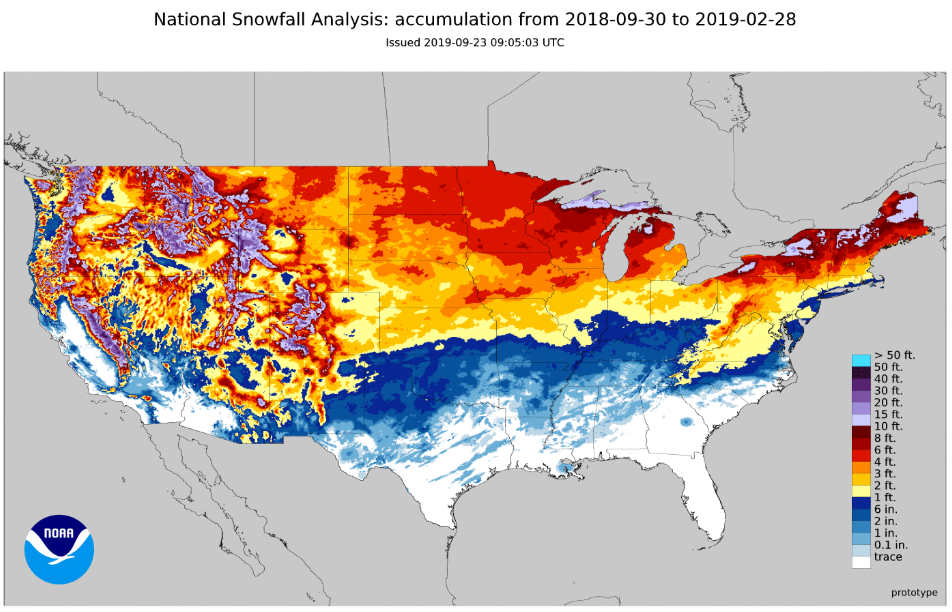 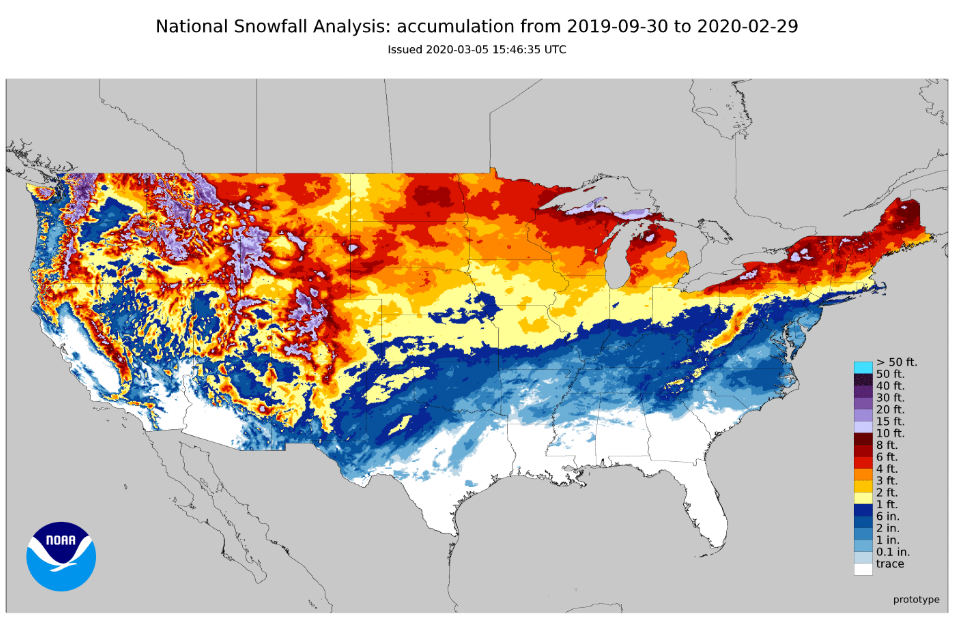 
Looking at the accumulated contiguous U.S. snowfall for the season-to-date (2019-20) and comparing it with the snowfall received over the previous snow season (2018-19), we can see that the overall blanket of snow in 2019-20 is not as large and does not reach as far south as compared with the previous season. Regions where 2019-20 snowfall is lacking include: a large portion of the Mid-Atlantic and Appalachian regions, as well as from from Baltimore to Boston. Regions which have received much less snowfall this season compared with the previous season include: The Sierra Nevada range, the northern and central Plains, the western Great Lakes and across parts of northern New England.