Seventeen percent of the contiguous U.S. (CONUS) was covered by snow at the beginning of November according to NOAA's National Snow Analysis. Much of the Rockies and from the middle Mississippi Valley into the Great Lakes were blanketed by snow. On November 12, another deep penetrating storm system traversed the Northern Rockies and Plains, the Mississippi Valley, and into the Great Lakes and Northeast, bringing snow cover to approximately 30 percent of the CONUS. This system brought bitter cold below zero temperatures from the central Plains to the Great Lakes. By mid-month, the winter season was making its mark as one of the coldest and snowiest starts on record from the Rockies to the Great Lakes. The largest snow events during November occurred over the last four days of the month, causing Thanksgiving travel delays all across the CONUS. Snow accumulations occurred from California to the Bitterroots and Rockies and from the Plains into the Great Lakes and Northeast. Snow accumulations were noted as far south as central and southern Arizona and New Mexico. Snowcover across the CONUS peaked on November 29 and 30 with approximately 41 percent coverage. 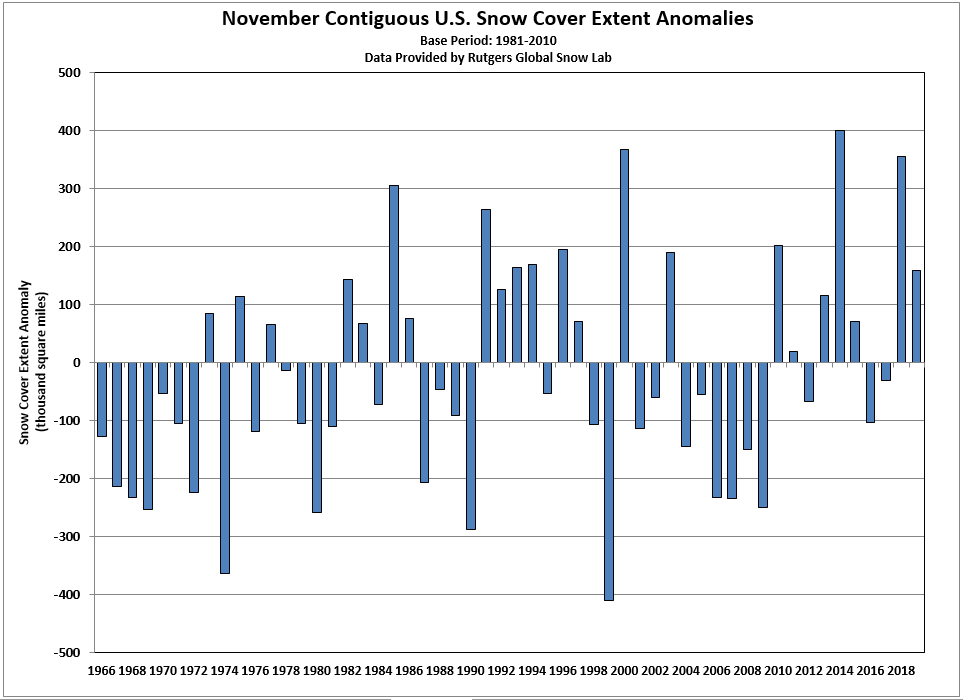 According to NOAA data analyzed by the Rutgers Global Snow Lab, the November snow cover extent was 634,749 square miles, 159,459 square miles above the 1981-2010 average. This was the 11th highest value in the 54-year satellite record. Above-average snow cover was observed across parts of the Sierra Nevada Range, the southern Rockies, and from the High Plains into the Great Lakes and Northeast. Below-average snow cover was observed over much of the Cascades, Bitterroots, and the northern and central Rockies. 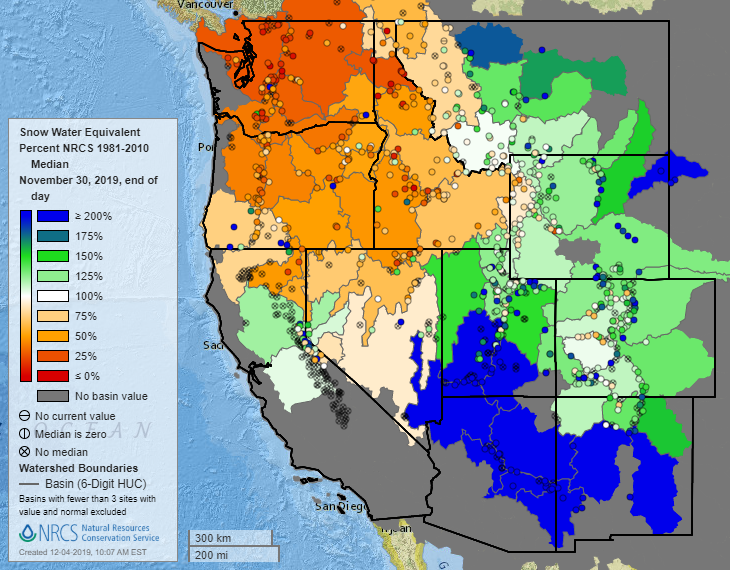 Melting of winter and spring mountain snowpack provides a crucial summer water source across much of the western United States. The total annual water budget for agriculture and human use in the mountainous West is highly dependent on the amount of snow melt that will occur in spring and is proportional to the amount of snow on the ground, which can be approximated by a measure of the snow water equivalent (SWE). On October 31, SWE values in excess of 200% of median were observed across a large portion of the northern Cascades, the Bitterroots, and the northern and central Rockies. Below-average SWE values existed across the Sierra Nevada Range as well as parts of the Great Basin. Median snow values in October tend to be low as it is early in the snow season, which makes it easier for snowy locations to have high SWE percentages. By the end of November, SWE values across the Pacific Northwest dropped to between 25 and 75 percent of the median value. Conversely, the southern Rockies had SWE values greater than 200 percent of the median for this time of year, due to a late month snowstorm which occurred across the region. The central Rockies and the western edge of the High Plains had SWE values between 100 and 150 percent of the median value at the end of November. 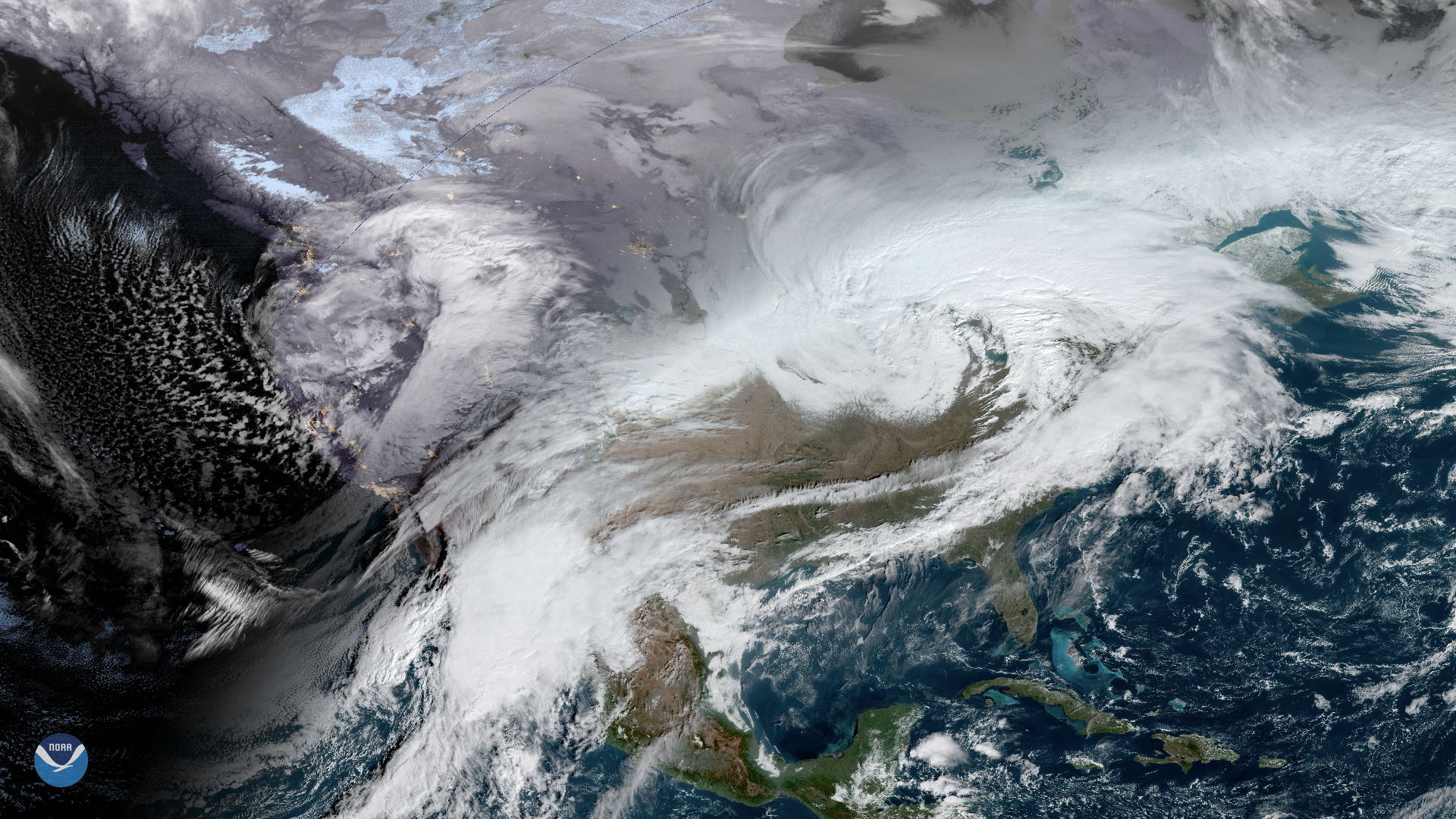 Two powerful mid-latitude cyclones brought heavy snows to both the West Coast and the Great Lakes and Northeast over the last four days of November. The cyclone off the Pacific Coast rapidly intensified near the Oregon and California border as the central barometric pressure dropped more than 34 millibars in only 12 hours, which is nearly twice the criteria for being classified as a "bomb cyclone". This storm brought hurricane-force winds to Oregon and California and set a preliminary low pressure record of 973.6 millibars in Crescent City, California, which will be reviewed by the State Climate Extremes Committee (SCEC) in the near future. In addition to the winds and low pressure readings, between one and three feet of snow fell in parts of the Sierras. This storm gradually weakened as it moved inland. The second mid-latitude cyclone was centered over the Great Lakes on November 27, moving towards New England. This storm system brought gusty winds and heavy snows to the Plains, western Great Lakes, as well as across parts of New England. In all, significant snows from both of these systems fell across much of the country with stations in ten states (Arizona, California, Colorado, Idaho, Maine, Michigan, Minnesota, Nebraska, Wisconsin, and Wyoming) exceeding 12 inches of new snowfall. Across some of the higher elevations, up to four feet of new snow fell.