During February, above-average temperatures were observed for most locations east of the Rockies with below-average temperatures for the Northwest. Western and northern areas of the nation were generally wetter than average, while the Midwest, Southeast, and coastal Northeast were drier than average. During the month, several winter storms impacted the West Coast and northern New England, while snow was mostly absent across much of the Great Plains, Midwest, and Mid-Atlantic. For only the third time since reliable records began in 1885, Chicago, Illinois observed no measureable snowfall during February. According to NOAA's National Snow Analysis, on February 1st, 40.6 percent of contiguous U.S. had snow on the ground — across the mountains in the West, Northern Plains, Great Lakes, and the Northeast extending into the Central Appalachians. Monthly snow cover peaked on February 9th at 40.8 percent, but dropped to 16 percent by February 21st. By February 28th, the national snow footprint was 33.2 percent. Snow was on the ground for most of the mountains in the West, the far Northern Plains, and northern New England. 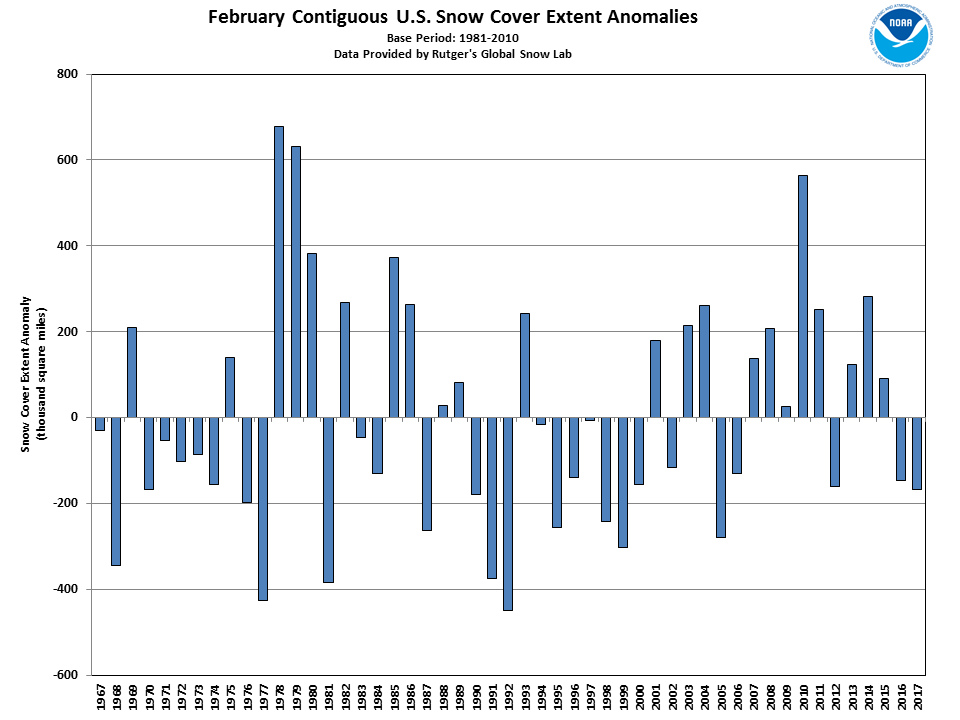 According to NOAA data analyzed by the Rutgers Global Snow Lab, the monthly snow cover across the contiguous U.S. was 1.03 million square miles, 167,000 square miles below the 1981-2010 average. This was the 12th smallest February snow cover extent in the 51-year satellite record and smallest since 2005. During the month, above-average snow cover was observed across the West, Northern Rockies, and New England, with below-average snow cover in parts of the Southern and Central Plains, Midwest, and Northeast.

Melting of winter and spring mountain snowpack provides a crucial summer water source across much of the western United States. The total annual water budget for agriculture and human use in the mountainous West is highly dependent on the amount of snow melt that will occur in spring and is proportional to the amount of snow on the ground. As a result of several strong Pacific storms slamming into the West Coast during February, as well as earlier in the winter season, on March 1st parts of the Central Rockies and Sierra Nevada Mountains had a snowpack that was more than 180 percent of average, with several observing stations setting new records. According to the Western Regional Climate Center, the California statewide snowpack was 166 percent of average, the sixth highest since 1950 and highest since 1998. Mountain areas in the Northwest and Northern Rockies had near- to below-average snowpack while below-average snowpack was observed in the Southern Rockies. In Alaska, southern areas of the state had near- to below-average snowpack with higher totals across interior parts of the state.