During January, above-average temperatures were observed for most locations east of the Rockies with below-average temperatures for the Northwest. Above-average precipitation was observed across most of the Lower 48 with below-average precipitation in the Northwest and Northern Rockies. During the month, several storms impacted the West Coast, Northern Plains to Midwest, and Southeast. According to NOAA's National Snow Analysis, on January 1st, 37.7 percent of contiguous U.S. had snow on the ground — mountain locations in the West, much of the Northern Plains and Upper Midwest, and interior parts of the Northeast. Monthly snow cover peaked on January 8th after a snow storm impacted the Southeast. By January 31st, the national snow footprint was 40.9 percent. Snow was on the ground for most of the mountains in the West, Northern Plains, Great Lakes, and the Northeast extending into the Central Appalachians. 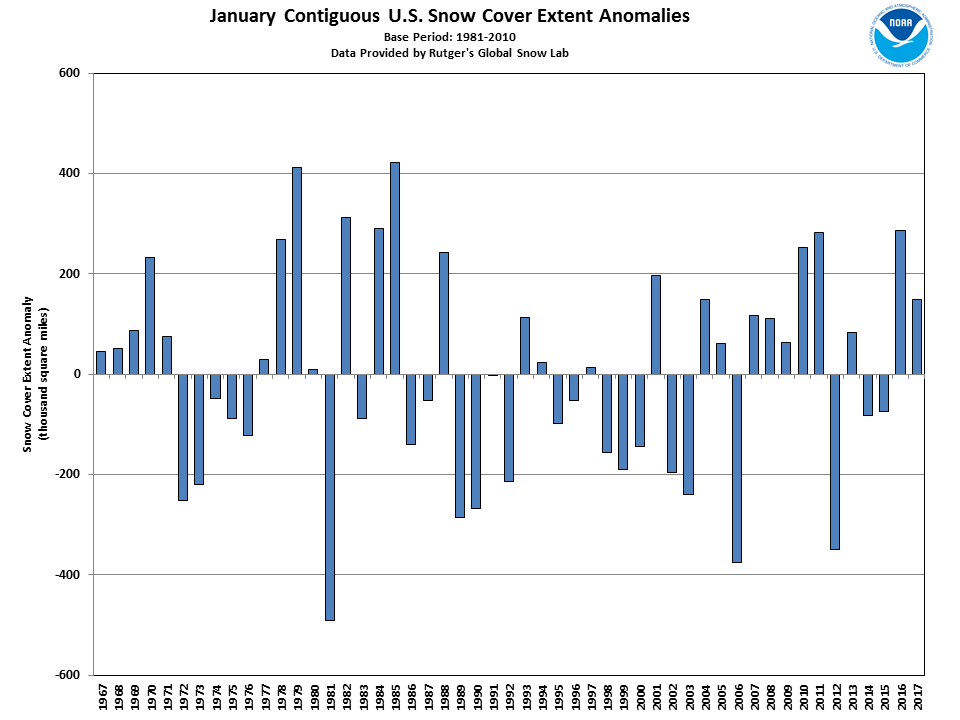 According to NOAA data analyzed by the Rutgers Global Snow Lab,the monthly snow cover across the contiguous U.S. was 1.51 million square miles, 148,000 square miles above the 1981-2010 average. This was the 13th largest January snow cover extent in the 51-year satellite record. During the month, above-average snow cover was observed across the West, Northern Plains, and Mid-Atlantic, with below-average snow cover in parts of the Southern Plains, Midwest, and Northeast. 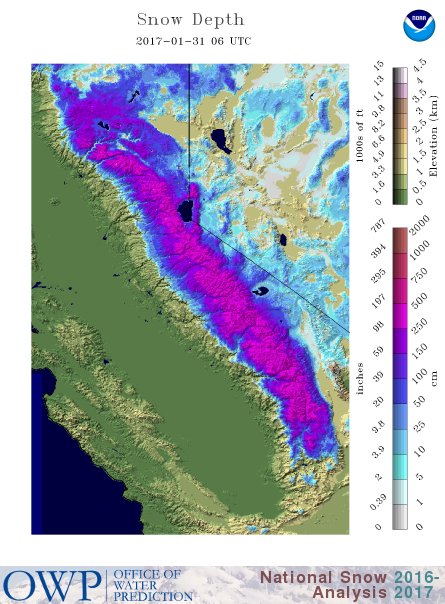 During January, a series of Pacific storms slammed into the West Coast bringing heavy snowfall to the higher elevations from California to Colorado. Deep tropical moisture associated with 'Atmospheric Rivers' accompanied these storms, pumping heavy precipitation into the region. Lower elevations received mostly rain, but higher elevations received several feet of snow. Some locations in the Sierra Nevada Mountains received over 20 feet of snow during January. One of the stronger events occurred during January 7th through 13th. Over the course of this single storm, Mammoth Mountain, California received 180 inches of snow. Impressive snow totals were also observed farther into the interior West with 116 inches in Mount Rose, Nevada; 94.5 inches near Encampment, Wyoming; and 51 inches in Crested Butte, Colorado. Heavy rains, exceeding 15 inches, and strong winds, exceeding 100 mph, also accompanied the storm causing significant impacts in the region. While big snowfall events like this one will help to replenish reservoirs during the spring melt season, it will take additional storms over the course of several winters to fully erase the region's multi-year precipitation deficits and drought impacts. 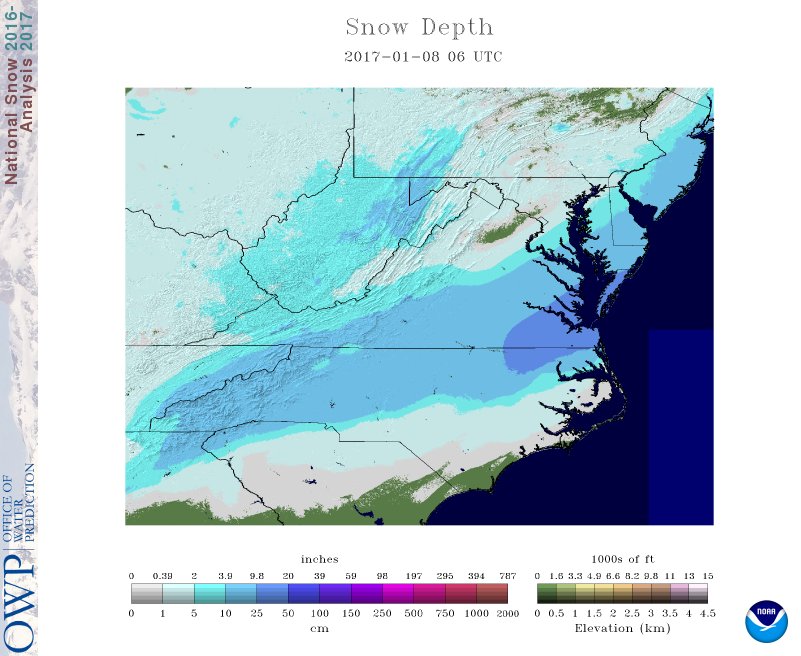 On January 7th-8th, a low pressure system moved from the Gulf of Mexico and across the Southeast and Mid-Atlantic as an upper-level trough brought colder temperatures from the north. On the north side of the storm, heavy snow was observed from northern Alabama to coastal Virginia. Blizzard conditions were experienced in and around Norfolk, Virginia as the storm strengthened off shore; producing winds in excess of 30 mph. Snowfall totals exceeding six inches were widespread across western and central North Carolina and eastern areas of Virginia. In North Carolina, Mount Mitchell received 11.5 inches of snow. In the Hampton Roads area of Virginia nearly a foot of snow was observed for many locations. The largest impact from the storm was highway closures and power outages. The storm was rated a Category 2, or 'Significant', on the Regional Snowfall Index Scale (RSI).