During March, all of the contiguous U.S. was warmer than average. During the first half of the month, record and near-record temperature dominated east of the Rockies, with near-average temperatures during the last week of March. The above-average temperatures limited snowfall during the month, with precipitation falling predominately as rain and the early-month warmth caused rapid melt of snow that was on the ground from the winter months. According to NOAA's National Snow Analysis, at the beginning of March, 18.6 percent of the contiguous U.S. had snow on the ground — the high elevations in the West, parts of the Northern Plains and Upper Midwest, and northern regions of the Northeast. The monthly snow cover peaked on March 4th at 24.9 percent of the contiguous U.S. being snow covered with the monthly minimum occurring on March 14th at 8.1 percent. By the end of March 14.0 percent of the Lower 48 was snow covered — the highest elevations in the Cascade and Sierra Nevada Mountains, much of the Central and Northern Rockies, and northern New England. 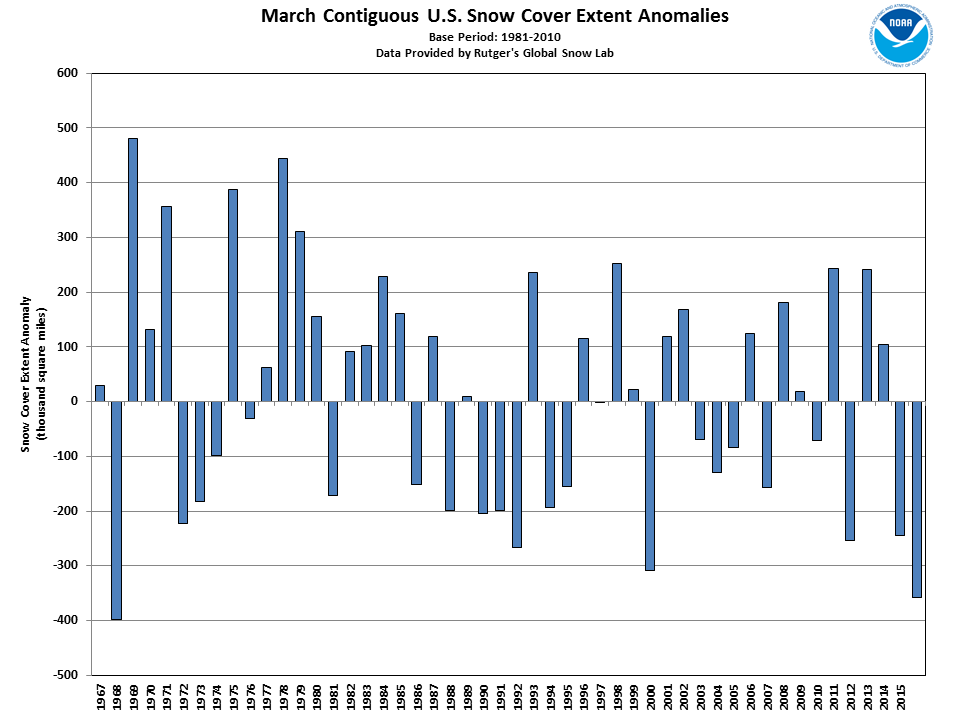 According to NOAA data analyzed by the Rutgers Global Snow Lab, the March contiguous U.S. snow cover extent was 382,000 square miles, 359,000 square miles below the 1981-2010 average, and the second smallest in the 50-year period of record. Only the snow cover extent of March 1968 was smaller. Above-average snow cover was observed across parts of the Northern Rockies and Great Basin. Below-average snow cover was widespread across the Southern Rockies, Great Plains, Upper Midwest, and Northeast. 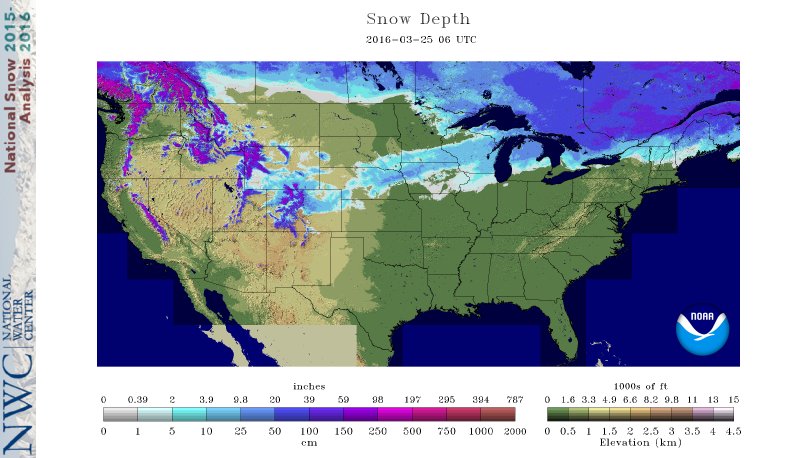 On March 23rd-25th, a strong low pressure system moved from the Central Rockies, across the Plains, and into the Midwest. Along the western and northern periphery of the storm, heavy snow was observed from Colorado to Maine with snowfall totals exceeding one foot in several states. In Colorado, over 30 inches of snow was observed in the high elevations. Over two feet of snow was observed in and around the Denver metro area with blizzard conditions impacting the city for several hours. The state's National Guard was deployed to assist in rescue missions as every major highway in and out of Denver was closed. Over 1,300 flights were cancelled at Denver International Airport. In Colorado alone, there were over 200,000 homes that lost power. Farther to the east, across the Northern Plains and Upper Midwest, over a foot of snow caused a state of emergency in Wisconsin and forced over 100 flight cancellations at the Minneapolis airport. Wind speeds across the region were also impressive with sustained winds approaching 80 mph. Farther to the south, the system spawned severe weather and intense wildfires.