During February much of the contiguous U.S. was warmer than average, particularly the northern tier and West. Above-average precipitation was observed across parts of the Central and Northern Plains and along the East Coast with below-average precipitation across the West and Southern Plains. According to NOAA's National Snow Analysis, at the beginning of February, 34.4 percent of the contiguous U.S. had snow on the ground — high terrain areas of the West, the Upper Midwest, and parts of the Mid-Atlantic and Northeast. Monthly snow cover peaked on February 3rd when 45.3 percent of the Lower 48 had snow on the ground. By the end of February, only 12.5 percent of the contiguous U.S. was snow covered — the highest terrain in the West and northern parts of the Upper Midwest and Northeast. 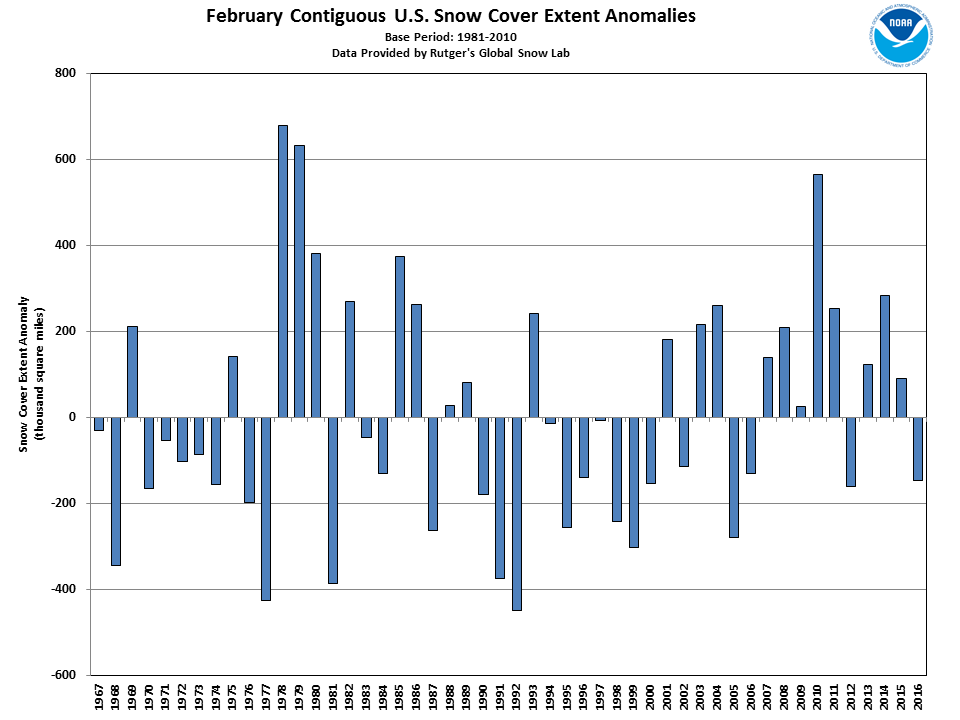 Melting of winter and spring mountain snowpack provides a crucial water source across much of the western United States. The total annual water budget for agriculture and human use in the mountainous West is highly dependent on the amount of snow melt that will occur in spring and is proportional to the amount of snow on the ground. As of March 1st, near- to above-average snow pack was observed across most areas of the West, from the Cascades to the Sierra Nevada Mountains, across the Great Basin and in the Northern and Central Rockies. Below-average snowpack was observed across the Southern Rockies. Across Alaska, a mix of above-average and below- average snowpack was observed with some locations in southern Alaska observing less than 25 percent of normal snowpack. December-February brought below-average precipitation, including snowfall, to most Alaska locations. However, heavy snow that fell during late autumn remained on the ground, boosting the late-winter snowpack across the state. 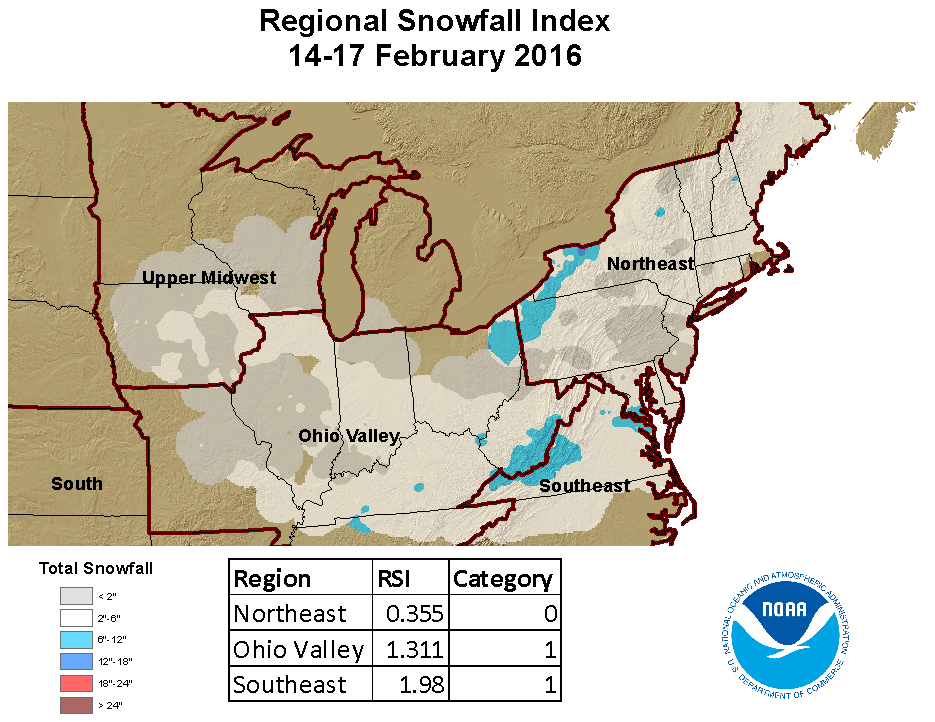 During February 14th-17th a strong low pressure system moved along the East Coast dropping heavy snowfall from the Tennessee Valley to New England. Behind the system, a cold front brought strong northwesterly winds to the region which produced additional snow for areas on the east side of the Great Lakes and along the spine of the Appalachians. Snowfall totals near one foot were observed across interior areas with totals approaching six inches more widespread from Tennessee to Maine. Significant amounts of freezing rain were also observed for areas closer to the coast in the Mid-Atlantic and Northeast. The largest impacts from the storm were adverse travel conditions and power outages. The winter storm was rated a Category 1 (Notable) on the Regional Snowfall Index (RSI) for both the Ohio Valley and Southeast. The RSI is based on the spatial extent of the storm, the amount of snowfall, and the juxtaposition of these elements with population.