During February, locations from the Rockies to the West Coast were much warmer than average which limited snowfall and mountain snowpack, contributing to long-term drought concerns. Locations from the Mississippi River to the East Coast were much cooler than average with several snow storms impacting the region. The Northeast bore the brunt of the snow where Boston, Massachusetts had its snowiest month of any month with 64.8 inches of snow, besting the previous record of 43.3 inches set in January 2005. Records in Boston date back to 1872. By the end of February, Boston had received 102 inches of snow for the 2014/15 snow season (since July 1st), marking the second largest seasonal snow total for the city. The snowiest season for Boston occurred in 1995/96 when 107.6 inches of snow was observed in the city. Spring snow is often observed in Boston, so there is an elevated possibility that the city's snow record will be surpassed this year.

According to NOAA's National Snow Analysis, at the beginning of February 42.6 percent of the contiguous U.S. had snow on the ground — the high elevations of the Rockies, the Central and Northern Plains, Midwest, and most of the Northeast. The snow cover peaked at the end of the month with 60.2 percent of the contiguous U.S. being snow covered — the high elevations of the Rockies, a large swath from the Southern Plains to the Southeast, the Upper Midwest, Great Lakes, and Northeast. 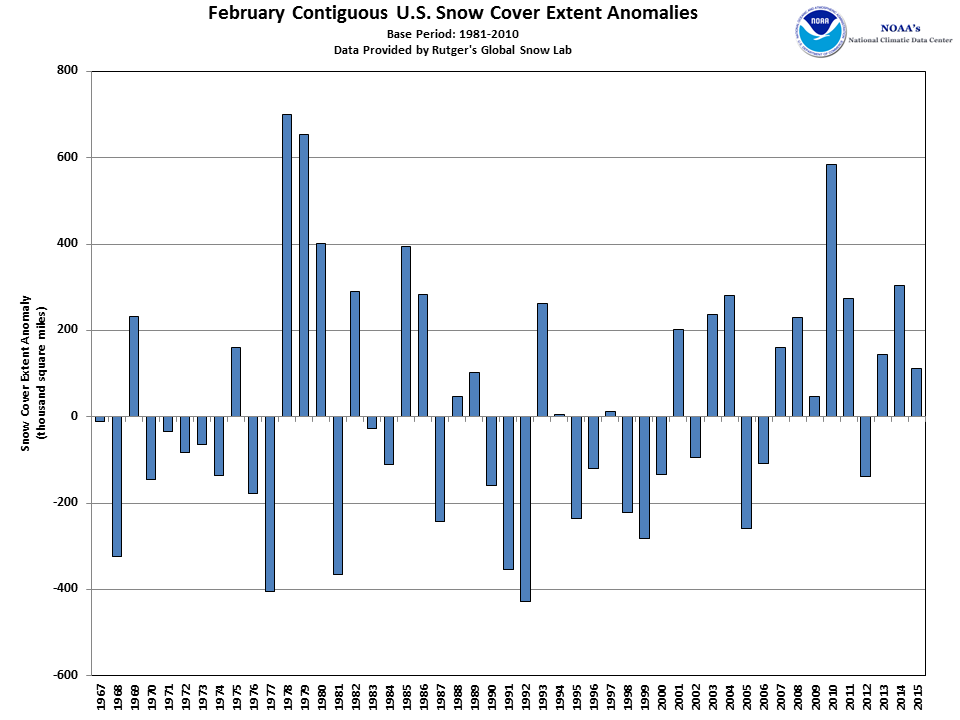 This analysis includes only a select list of the winter storms to impact the country during February. For additional information on each winter storm, please visit the NOAA Weather Prediction Center's 2015 Winter Storm Summaries.

On January 30th through February 3rd, a strong low pressure system moved out of the Central Rockies, through the Midwest, and into the Northeast dropping heavy snowfall from Colorado to Maine. Snowfall totals greater than 6 inches were widespread, with totals exceeding 18 inches in the Midwest and New England. Chicago, Illinois observed 19.3 inches of snow, marking the fifth highest single-storm snowfall on record for the city. Detroit, Michigan received 16.7 inches of snow, the third highest single-storm snowfall on record for the city, only exceeded by December 1974 and April 1886 snow events. The storm also contributed 16.2 inches of snow to Boston's annual snow total. The largest impacts from the storm were closed roadways and cancelled flights across the areas impacted. On the Regional Snowfall Impact (RSI) scale, which measures the impact of winter storms based on the total population impacted by snowfall, the storm was rated a Category 3, or 'Major', for the Ohio Valley and a Category 2, or 'Significant', in the Upper Midwest. 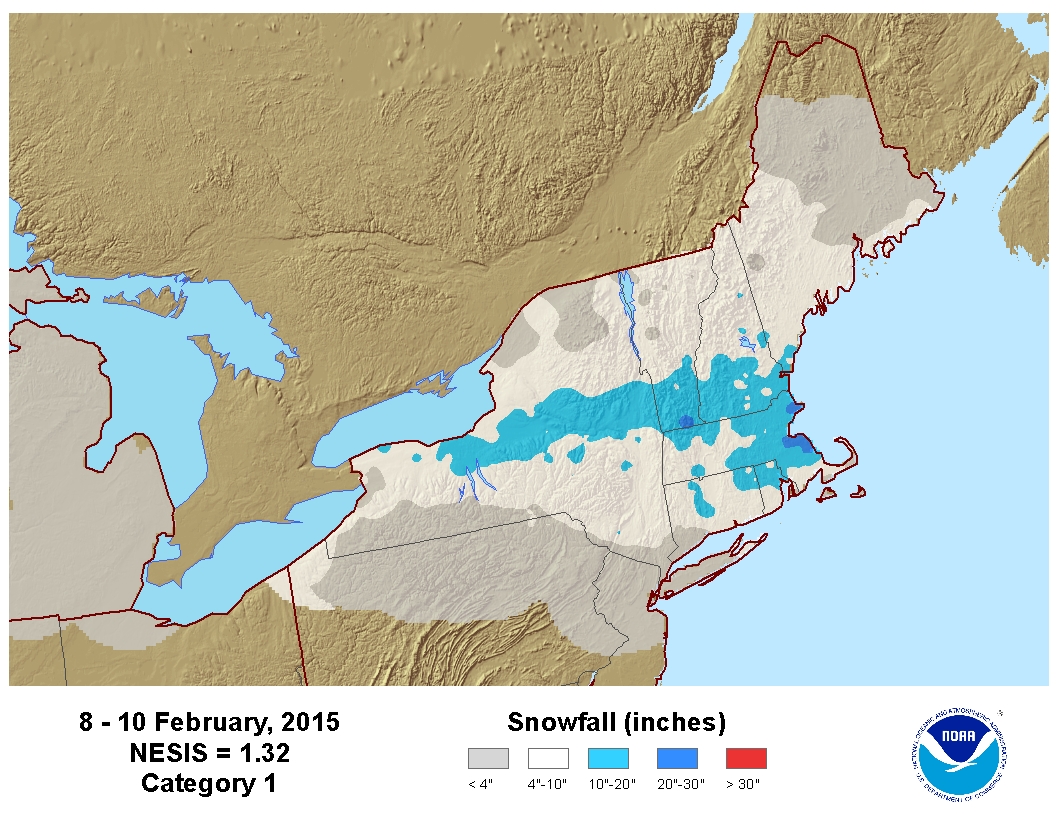 Of the several snow storms to impact Boston during February, the event on the 8th and 9th brought the largest amount of snow. The two-day snowfall total for the city was 23.1 inches. This storm system moved from eastern Canada into the Northeast U.S., with most of the snow being confined to New York and New England. The storm system strengthened after it moved off shore, with coastal areas of New England getting the heaviest snow totals. Preferred areas of orographically-enhanced snowfall across the interior also received heavy snow totals during the event. Most locations that did receive snowfall observed over a foot of snow, with some locations receiving over two feet of snow. This storm had limited impact in the region due to the massive amounts of snow already received up to this point in the season. The storm was rated a category 1, or 'Notable', on the RSI scale. 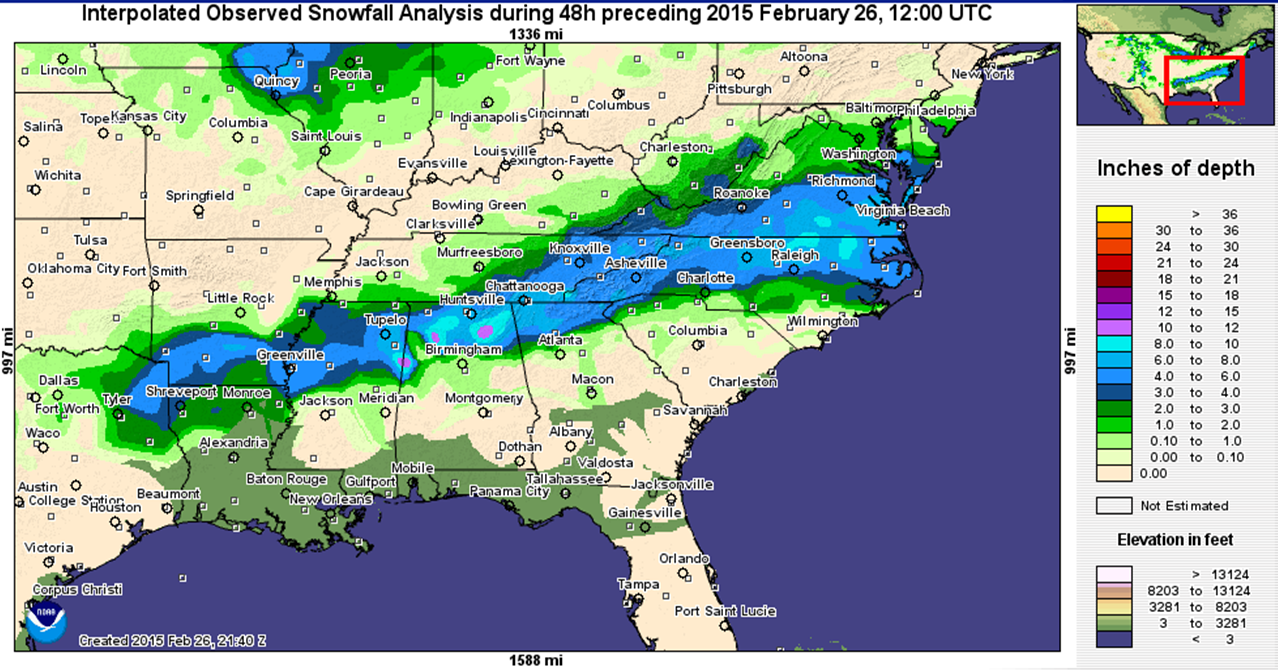 A fast-moving storm system dropped heavy snow across the Deep South as it moved from Texas to southern Virginia on February 25th and 26th. Abundant moisture from the Gulf Coast collided with cold air moving from the Midwest to create the winter precipitation event. The rain-snow transition line set up just north of the major metropolitan centers of the region, with the largest cities missing the major snowfall totals including Atlanta, Georgia and Charlotte, North Carolina. However, many cities were practically shut down ahead of the event to minimize potential impacts. The hardest hit areas were northern regions of Alabama, Mississippi, and Georgia as well as most of North Carolina and Virginia. Snowfall totals exceeded eight inches in many of the impacted areas, with the highest snowfall amount of 11.5 inches observed in Grant, Alabama. For some southern locations, this marked the heaviest snowfall in over a decade. The largest impact from the storm was highway closures, but the snow quickly melted as warmer moved in after the storm.