During January, numerous storms impacted locations from the Northern Rockies through the Northern Plains and across much of the East. Parts of the Far West and the Southern Rockies had much-below-average snow during January. According to NOAA's National Snow Analysis, at the beginning of January, 36.9 percent of the contiguous U.S. had snow on the ground — the Cascades, the Northern and Central Rockies, Northern Plains, Upper Midwest, and interior locations of the Northeast. Monthly snow cover peaked on January 6th at 52.0 percent of the Lower-48. By January 31st, 49.4 percent of the contiguous U.S. had snow on the ground — the Cascades, Central and Northern Rockies, parts of the Sierra Nevada mountains, the Northern Plains, Midwest, and Northeast. Snow cover also stretched from the Mid-Atlantic, along the coastal Southeast, and into the panhandle of Florida. Several of the storms that impacted the nation during January directly hit Chicago, Illinois. The city received 33.7 inches of snow during the month, the third highest snowfall total for any month in the city. The snowiest month on record in Chicago occurred in January 1918, when 42.5 inches of snow accumulated. 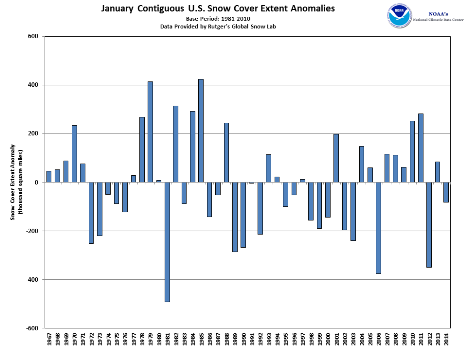 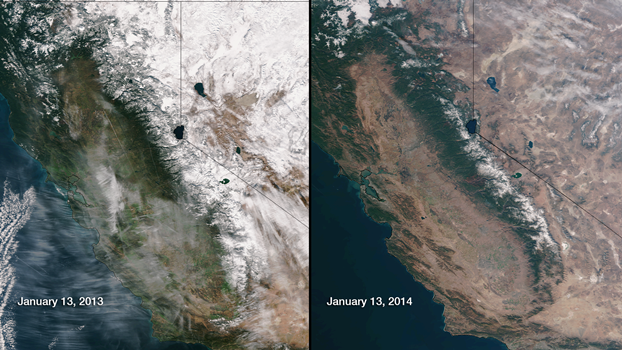 Winter and spring mountain snowpack provide a crucial water source across much of the western United States. The total annual water budget for agriculture and human use in the mountainous West is highly dependent on the amount of snow melt that will occur in spring and is proportional to the amount of snow on the ground. As of February 1st mountain locations across the Northwest, California, and the Southern Rockies had snowpack totals less than 50 percent of normal for the date. Some locations had snowpack totals less than 25 percent of normal. In fact, more snow fell atop Mauna Kea in Hawaii than across parts of the Sierra Nevada Mountains and Southern Rockies. The snow season still has several months for locations to build up their snowpack totals in the western U.S., with snowpack typically peaking in mid to late spring. Locations across the Northern and Central Rockies had above-average snowpack totals. In Alaska below-average snowpack was observed in southern parts of the state, but above-average snowpack was observed in interior locations. The below-average snowpack across southern Alaska was partially due to precipitation falling mostly as rain and not snow, and combined with warmer-than-average temperatures caused some of the snowpack to melt. 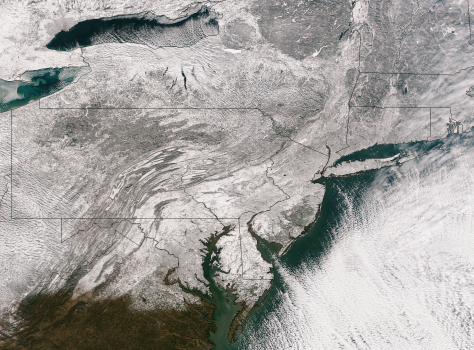 On January 2nd through 3rd, a low pressure system and cold font moving through the Midwest and into the Northeast interacted with another low pressure off the Mid-Atlantic coast to bring heavy snowfall through the Midwest, parts of the Southeast, and the Northeast. Snowfall totals approaching a foot were widespread across the regions impacted with nearly two feet of snow across parts of coastal New England. The storm caused numerous disruptions to the impacted regions including closed schools, roads, and over 2,000 flight cancellations. Behind the storm system, cold Arctic air moved into the eastern two-thirds of the contiguous U.S., breaking daily temperature records. Temperatures as much as 30 degrees below normal impacted a large area of the nation, with temperatures dipping to levels not experienced for several years. Although numerous daily cold temperature records were broken, only one long-term weather station broke a new all-time cold temperature record. The temperature in Aroostook, Maine dropped to -49.0 °F, breaking its previous all-time cold temperature record of -47.0°F set on January 11, 1995.

From January 5th to 7th, another storm system brought heavy snow to the central and eastern U.S. with a reinforcing shot of cold Arctic Air. A low pressure system and associated cold front moving from the Mississippi River Valley, into the Ohio Valley, and eventually into the Northeast and brought snow, cold temperatures, and strong winds. Wind chill advisories, watches, and warnings were issued by the National Weather Service for the Northern Plains, Midwest, Great Lakes, Southeast, Mid-Atlantic, and Northeast. Snowfall totals over one foot were observed from Missouri to Michigan, with snowfall totals approaching six inches widespread from Oklahoma through the Tennessee River Valley and into the Northeast. Freezing rain and sleet fell across much of the Mid-Atlantic region. Wind Chill values reached -60°F across the Northern Plains, Midwest, and Northeast, surpassing the cold air outbreak from a few days prior, marking the coldest apparent temperatures (combination of wind and temperature) for many locations in as many as 20 years. All-time temperature records were broken for cities in Kansas, Missouri, and North Carolina. The snow, freezing rain, and bitter cold had numerous impacts including school closures, power outages, thousands of flight cancellations, and traffic accidents including fatal accidents. Most government offices in the Washington, D.C., area were closed. 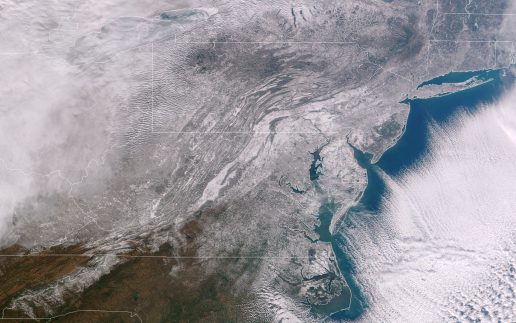 The third winter storm of 2014 impacted the Midwest and Northeast on January 21st and 22nd. A low pressure system moving from the Southern Appalachians into the Northeast brought another round of heavy winter precipitation and a shot of cold air from the Southeast to the Northeast. Snowfall totals approaching and exceeding one foot were reported from North Carolina to Maine. As with the previous two storms, road closures and flight cancellations were widespread. Behind the storm system, lake effect snow impacted parts of Indiana. Gary, Indiana, received 18 inches of snow in a five hour period, with 20 inches observed through the entire event. 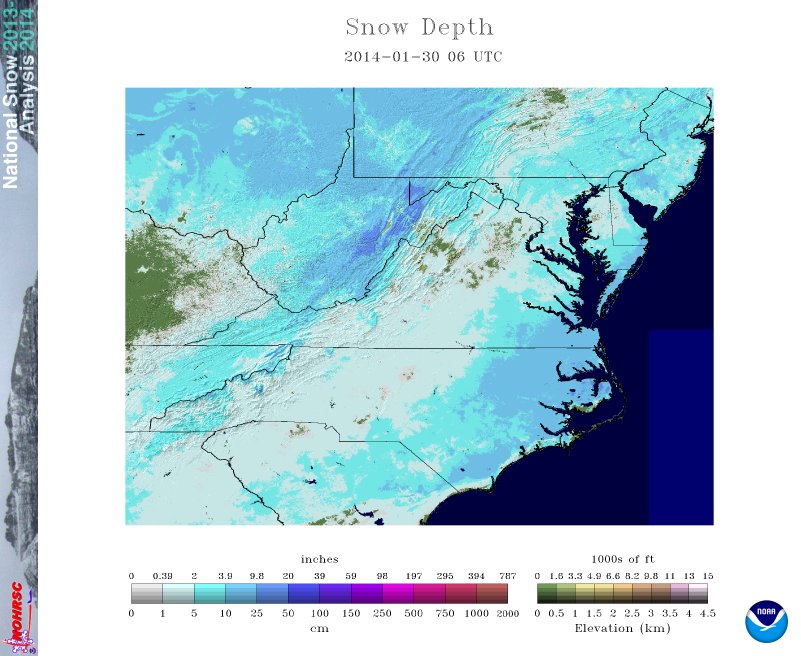 The fourth winter storm of January impacted the Southeast on January 28th through 30th. A low pressure system moved from the Gulf Coast through the Southeast, and off the Mid-Atlantic coast, bringing snow, sleet, and freezing rain to the Southeast. Several inches of snow accumulated from Louisiana to Virginia. Southeastern Virginia was the hardest hit, in terms of total snow accumulation, with 10 inches of snow around the Virginia Beach area. One inch of snow fell as far south as Pensacola, Florida. The winter weather and limited supply of snow-clearing equipment in the region caused massive travel disruptions. Impacts were likely the greatest in the Atlanta metro area, where two inches of snow fell while tens of thousands of motorist attempted to leave work in the early afternoon as the storm hit. Thousands of cars were abandoned on highways around the city, complicating traffic congestion. School buses that became trapped were forced to return and thousands of students had to sleep at their schools. Thousands of homes also lost power as frigid temperatures moved into the region following the snow event. 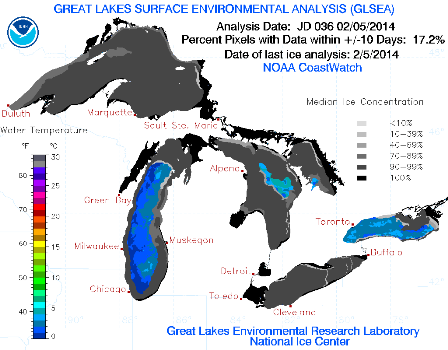 The cold temperatures that impacted the Great Lakes region during January contributed to a large portion of the lakes freezing over. According to data from the Canadian Ice Service and the Great Lakes Environmental Research Lab, during the first week of February, approximately 75 percent of the Great Lakes were ice covered. The total ice coverage was more than twice the 1981-2010 median value for the date and the largest since February 1996. Lakes Superior and Erie were completely ice covered, Lake Huron was mostly ice covered, while Lakes Ontario and Michigan were about half ice covered. The ice cover slowed commercial shipping across the lakes. However, there were some potential positives for the large ice coverage. The ice helped to limit lake effect snow by the end of January. The ice cover also helps to slow evaporation from the lakes. Just last January, Lakes Huron and Michigan reached record low levels. A contributing factor then was the increased evaporation from the lakes due to the lakes no longer experiencing as much ice cover as they did in the past.