The 2011/12 winter season was nearly non-existent for much of the eastern half of the nation. The December 2011-February 2012 three-month period was marked by near-record warmth across the U.S.-Canadian border, the Midwest, Mid-Atlantic, and Northeast, limiting seasonal snowfall across those regions. Many locations had near-record low snowfall totals for the winter season. Early spring brought much of the same, when the contiguous U.S. had its warmest March on record, with a monthly temperature 8.6°F above average. The lack of snowfall and snowpack for the winter and spring across the Rockies, Great Plains, and Midwest was a precursor to the large drought episode that impacted two-thirds of the nation during the summer and autumn of 2012. In contrast to the rest of the nation, the Pacific Northwest was closer to average during winter in terms of temperature and precipitation, with several winter storms bringing heavy snowfall to the high elevations. The early-spring was wetter and cooler than average for the Northwest, contributing to above-average snowfall for many locations in the region. 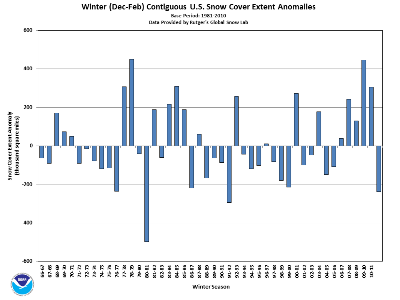 Winter and spring mountain snowpack provide a crucial water source across much of the western United States. The total annual water budget for agriculture and human use in the mountainous West is highly dependant on the amount of snow melt that will occur in spring and is proportional to the amount of snow on the ground. The annual snowpack typically reaches its maximum value at the end of March. According to data from the USDA, on April 1st, 2012, above-normal snowpack was observed through the Cascades of Oregon and Washington, with near-normal snowpack stretching eastward through the northern Rockies of Idaho, Montana, and northern Wyoming. To the south, below and much-below snowpack was observed for the Sierra Nevada Mountains, the Great Basin, and the Central and Southern Rockies. Snowpack totals less than 50 percent of normal were widespread in California, Nevada, Utah, Colorado, Arizona, and New Mexico. In Alaska, snowpack totals were above normal for the Southern coasts and peninsula, and below-normal across the North Slope.

A strong and powerful winter storm moved across the Southern Rockies and High Plains of Colorado, New Mexico, Texas, Oklahoma, and Kansas on December 19th and 20th of 2011. Snowfall up to 15 inches was reported across the region, and strong winds in excess of 50 mph created blizzard conditions. Parts of Interstates 25 and 70 were closed, and the storm was blamed for six deaths. Dalhart, Texas, shattered its daily snowfall record, where 7.0 inches fell on the 19th, surpassing the 0.1 inch which fell on the date in 1983. The 8.2 inches that accumulated in Pueblo, Colorado during the two-day event contributed to the city having its snowiest December on record, with 18.6 inches falling throughout the month. This surpassed the previous December record of 18.2 inches, which fell in December 1913. 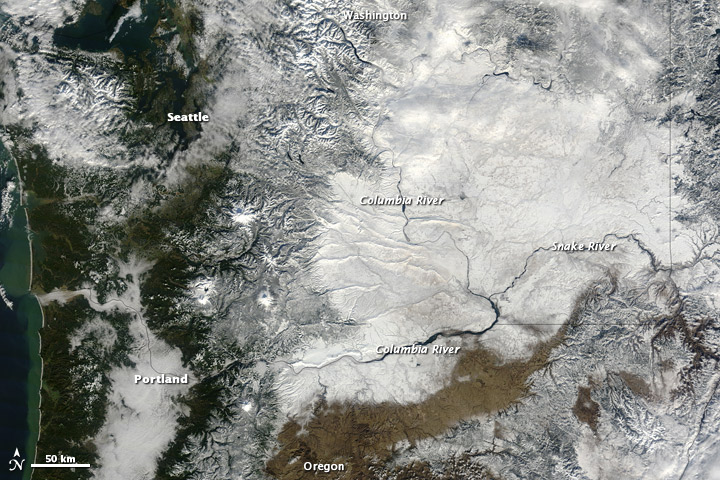 A large and powerful winter storm, accompanied by a surge of moisture from the tropics often referred to as an atmospheric river or the 'Pineapple Express', impacted the western U.S. January 18th–23rd. The worst impacts were felt across the Pacific Northwest, where several feet of snow accumulated and strong winds were observed, causing icy roads, downed power lines, and avalanches. A state of emergency was declared for much of Oregon and Washington, where over a quarter-million households lost electricity. Impressive wind, snow, and rain measurements were made during the event Mount Hood, Oregon received over 50 inches of snow, winds approaching 90 mph were measured at Summer Lake, Oregon, and over 15 inches of rain fell at Swiss Home, Oregon. The Mary’s River in Philomath, Oregon crested at its highest flood height on record. Seven inches of snow fell in Seattle, which averages only 8 inches of snow a year. To the south, across the high terrain of California and Nevada, the precipitation was a welcome sight, where very dry conditions had previously dominated during the 2011-2012 winter season. Nevada’s Carson River Basin had snowpack only 8 percent of normal before the storm (compared to 224 percent at the same point in January 2011, one year prior).

A record-breaking snow storm impacted eastern Colorado and parts of Nebraska February 2nd–4th. The slow moving storm dropped 15.9 inches of snow in Denver, a new February snow storm record, surpassing the previous record of 14.1 inches set in February 1912. The 22.7 inches that fell in Boulder was also a February record. Snow accumulations greater than three feet were widespread across the region's highest terrain. Storms of this magnitude are more common in the region during the early spring months of March and April. As the storm moved off to the east it dropped upwards of a foot of snow across much of Nebraska. The 11.1 inches that accumulated in Lincoln, Nebraska was the fourth largest 24-hour snowfall on record for the city. 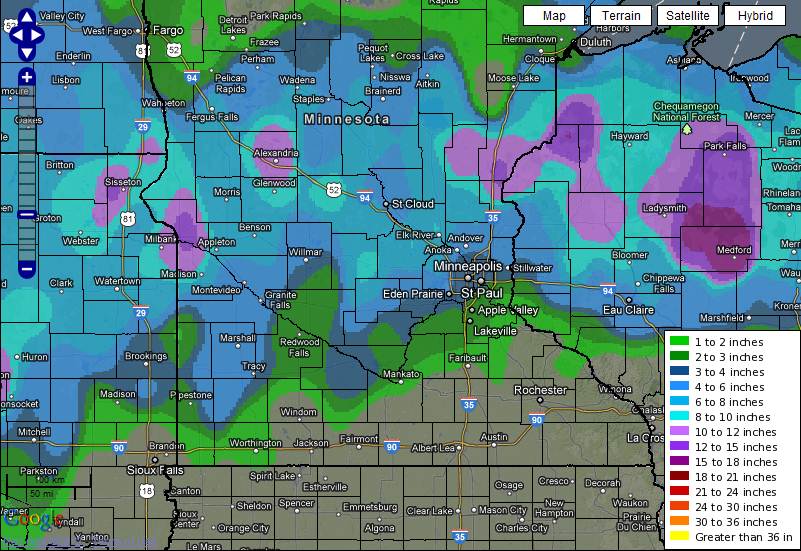 A potent storm system on February 28th and 29th brought heavy snowfall and blizzard conditions across the Northern Plains, Great Lakes, and into the Northeast. Snowfall totals exceeding one foot fell in a string of states from South Dakota to Maine. The heaviest snow fell across Minnesota and Wisconsin, where snow totals approached two feet, accompanied by winds gusting to 50 mph, creating blizzard conditions for several hours. The snow from this storm was one of the few snow events this season across many of the regions affected. Much of the Northern Plains, Great Lakes 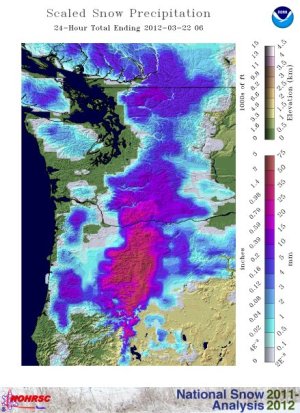 During March, as much of the eastern U.S. was basking in record breaking warmth, an upper-level trough brought cooler-than-average conditions and late-season precipitation to the Pacific Northwest. On March 22nd, a large Pacific extra-tropical cyclone slammed into the West Coast, dumping upwards of three feet of snow across the high elevations of the Washington and Oregon Cascade Mountains. The 0.5 inch of snow that fell at the Portland, Oregon airport was the largest snowfall accumulation this late in the season. Salem and Eugene, Oregon both set new March snow storm records with 2.5 and 7.5 inches of snow, respectively. This storm was part of a larger and persistent weather pattern which brought much-above-average precipitation and below-average temperatures to the region during March. The 7.89 inches of precipitation that accumulated in Portland was a new monthly record. 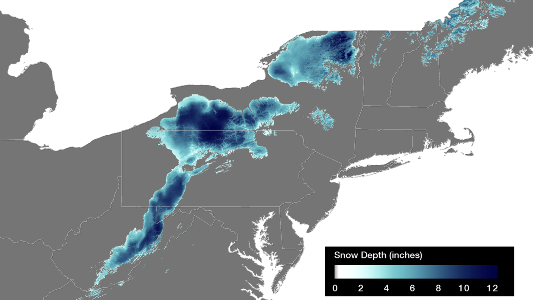 A late-season storm dropped over a foot of snow from West Virginia to Upstate New York, along the higher elevations of central and northern Appalachian Mountains, on April 23rd and 24th. To the east, in the lower elevations, heavy rain fell across the large cities of the Northeast. This type of coastal storm, called a Nor’easter, was only the second of the season to impact the eastern seaboard, with the other being very early in the season in October. The snow storm was also on the heels of the warmest March on record for many locations across the region, where most trees already had begun to leaf. The snow falling on trees with leaves caused additional headaches by bringing down limbs and cutting power to at least 75,000 residents. The storm also resulted in at least 48 daily snowfall records. Although the storm did have some negative impacts, it provided drought-relieving precipitation for many locations in the Northeast. 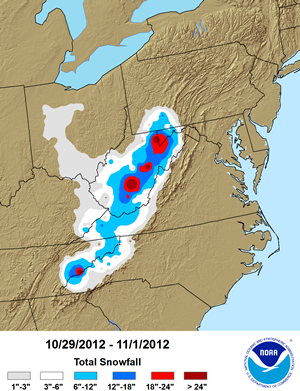 The remnant low pressure system from Hurricane Sandy dropped copious amounts of snow across the Southern and Central Appalachians as it moved westward after making landfall near Atlantic City, New Jersey on October 29th. Over a foot of snow was reported in six states from North Carolina to Pennsylvania, shattering October monthly snowfall records. Widespread, heavy snow of this magnitude during October has never been observed across this region. The largest snow totals occurred along the highest elevations of the Appalachians, with Mount Leconte, Tennessee receiving 33 inches of snow and Terra Alta, West Virginia measuring 36 inches. Very strong winds combined with the snow to create blizzard conditions for up to two days in some locations. The largest impacts of the storm were the massive power outages due to downed trees and power lines and building collapses because of the heavy, wet nature of the snow. Flooding was also a concern as warm temperatures returned quickly after the storm causing rapid melt and runoff.