During November, much of the country was drier than average, while the western states were warmer than average, both of which limited snowfall during the month. Despite the warm and dry conditions, several storms and cold fronts did impact the mountainous West and the Northern Plains, bringing snowfall. According to NOAA’s National Snow Analysis, at the beginning of November, 3.0 percent of the contiguous U.S. had snow on the ground — the Central and Southern Appalachians, parts of the Upper Midwest, and the highest terrain of the West. Daily snow cover peaked on November 12th with 31.5 percent of the country snow covered. On November 30th, 14.4 percent of the lower 48 had snow on the ground — much of the interior Northeast, the Western Great Lakes, the Northern Plains, and the high terrain of the West. 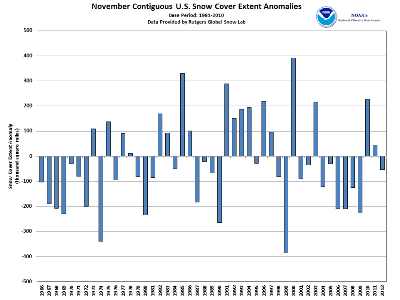 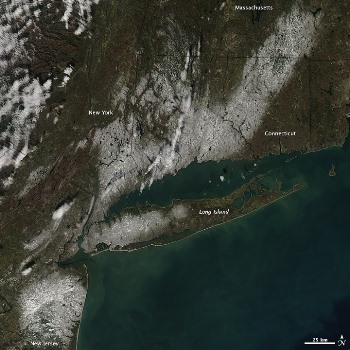 A strong, early-season Nor’easter impacted the Northeast and New England on November 7th and 8th, on the heels of post-tropical cyclone Sandy. The storm brought strong winds, storm surge, and heavy precipitation from New Jersey to Maine. Snowfall totals from the storm were generally light, but were unusual for this early in the season. Central Park in New York City received 4.7 inches of snow, marking the earliest 4.0+ inch snow accumulation for that location. The previous record was November 23rd, 1989. The highest snow accumulation occurred in Clintonville, Connecticut, which received 13.5 inches of snow. The storm was accompanied by winds in excess of 40 mph which caused power outages to 375,000 homes, many of which had just had their power returned after Sandy. Many homes were still without power when the Nor’easter hit.