During December, the weather pattern brought several strong snow storms to the Southern Rockies and parts of the High Plains. A large and persistent trough in the jet stream allowed cooler-than-average temperatures to be present across most of the West, and as storms moved onshore from the Pacific, precipitation fell mainly as snow across the Southwest. Warmer-than-average temperatures across the Northern Plains, Midwest, and most of the East caused precipitation to fall predominantly as rain when these storms systems moved eastward. This limited snow cover for the eastern two-thirds of the nation during December. At the beginning of December, according to NOAA’s National Snow Analysis, 17.2 percent of the contiguous U.S. was snow covered. Snow cover was present across the high terrain of the West, while light snow depths were observed across the Northern Plains, the Central Great Lakes, the Mid-Mississippi River Valley, and along the Central Appalachians. By December 31st, 18.9 percent of the contiguous U.S. was snow covered — the high terrain of the West, parts of the Northern Plains and Great Lakes, and parts of the Northeast and northern New England. 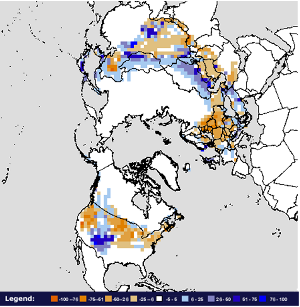 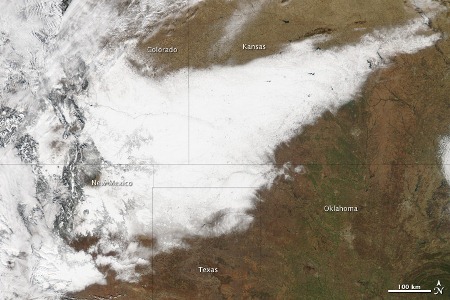 A strong and powerful winter storm moved across the Southern Rockies and High Plains of Colorado, New Mexico, Texas, Oklahoma, and Kansas on December 19th and 20th. Snowfall up to 15 inches was reported across the region, and strong winds in excess of 50 mph created blizzard conditions. Parts of Interstates 25 and 70 were closed, and the storm was blamed for six deaths. Dalhart, Texas, shattered its daily snowfall record, where 7.0 inches fell on the 19th, surpassing the 0.1 inch which fell on the date in 1983. The 8.2 inches that accumulated in Pueblo, Colorado during the two-day event contributed to the city having its snowiest December on record, with 18.6 inches falling throughout the month. This surpassed the previous December record of 18.2 inches, which fell in December 1913.