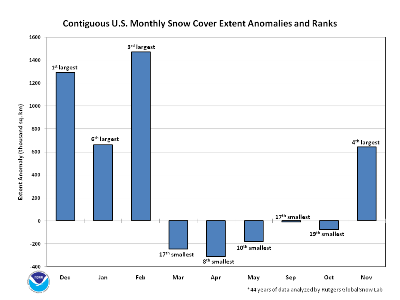 Much of the United States experienced a record breaking 2009–2010 winter. Long–standing monthly and seasonal snowfall records were shattered and record cold temperatures were set over the eastern two-thirds of the nation. According to 44 years of satellite data analyzed by the NOAA supported, Rutgers Global Snow Lab, a new monthly snow cover extent record was set during December 2009. This was partially due to snow falling across the Southern Plains, Gulf Coast, and the Southeast — regions which do not typically receive much December snowfall. Persistent cold and snow across much of the country during January and February was associated with those months ranking in their top ten largest snow cover extents for the U.S. — January was 6th largest and February 3rd largest. A far–reaching storm the second week of February brought snow to the Deep South, and every state in the U.S. had snow on the ground, including Florida and Hawaii. More information on the 2009–2010 winter can be found in the 2009–2010 Cold Season Special Report. As the season transitioned into spring, conditions were almost the complete opposite of the winter, with low snow cover extents reported across the United States during April (8th smallest) and May (10th smallest). The low spring snow cover extent was driven by anomalously warm conditions over the regions which had experienced the heavy snow during the December–February period.

Winter and spring mountain snowpack provide a crucial water source across much of the western United States. The total annual water budget for agriculture and human use in the mountainous West is based upon the amount of snow melt that will occur in spring and is proportional to the amount of snow on the ground. The annual snowpack typically reaches its maximum values at the end of March. During the 2009–2010 Cold Season, the West generally experienced much–below average snowpacks. Mountain snowpack in the Pacific Northwest was less than 25 percent of normal in several locations. The pattern was evident in the high-elevation station (SNOTEL) network, especially in maps of the end-of-March snowpack and snow water content. Some individual SNOTEL stations in the northern Rockies had early April snow water equivalent in the driest fifth percentile of the historical record (95 percent of the years for this date were wetter). Conversely, the snowpack was much above average in Arizona, New Mexico, and southern Utah.

The numerous snow storms affecting the country during the late 2009 and early 2010 led to hundreds of record snowfall accumulations. Many of the records broken were along the densely-populated Northeast corridor. Provided is a table of select seasonal snowfall records. Please visit NCDC U.S. Records for additional information.

A major winter storm of December affected the Mid-Atlantic and Northeast on December 18th–21st 2010, leaving behind 1–2 feet (30.5 cm–61.0 cm) of snow from North Carolina to New England. The storm at one point was over 500 miles (800 km) in width, eventually affecting 14 states and tens of millions of Americans. The heavy snow crippled the densely populated corridor from Richmond, Virginia to Boston, Massachusetts. Reagan National Airport in Washington, DC experienced its largest calendar day snowfall acumulation on record with 15.0 inches (38.1 cm). The storm was given a preliminary score of Category 3 on the Northeast Snow Impact Scale (NESIS), categorizing the storm as 'Major' and ranking it in the top 25 winter storms to affect the region.

Another major winter storm during December presented a huge part of the country with a white Christmas. The large storm produced blizzard conditions from Texas to the U.S.–Canadian border on December 24th–27th 2010. Dallas, Texas observed its first Christmas Eve snowfall on record. The storm was associated with the most snowfall to affect Oklahoma City, Oklahoma in a 24-hour period (14.1 inches or 35.8 cm) and was the second biggest storm accumulation for Sioux City, South Dakota on record (20.7 inches or 52.6 cm). The storm left travelers stranded in airports and on highways, as many people were in transit for the holiday season.

On February 4th a storm that originated in the southwest U.S. traversed eastward, pumping in moisture from the Gulf of Mexico and the Atlantic. Some locations in Maryland, Pennsylvania, Virginia, and West Virginia recorded more than 30 inches (76 cm) of snow. In Washington, DC (Reagan National Airport), the two-day total of 32.4 inches (82.3 cm) ranked as the highest total storm amount in history. In Philadelphia, the 28.5 inches (72.4 cm) ranked as the second highest amount, behind the 30.7 inches (78.0 cm) received on January 7th–8th, 1996. The 25.0 inches (63.5 cm) that fell in Baltimore was its third highest storm total amount since official records began in 1891.

Another blizzard created havoc during February 9th–11th on the areas that were still digging out from previous storms. This powerful Nor'easter produced as much as 14 inches (35.6 cm) of snow in the Washington, DC area, 17 inches (43.2 cm) in New Jersey, 20 inches (50.8 cm) in Baltimore, as much as 24 inches (61.0 cm) in northern Maryland, and more than 27 inches (68.8 cm) in Pennsylvania. As a result of these two storms, several locations broke seasonal snowfall records, some of which were more than a century old. 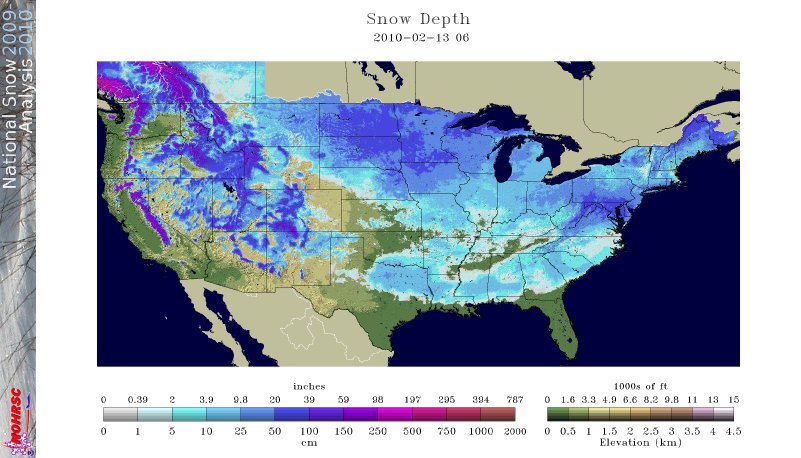 On February 11th–13th, as much as 6 inches (15 cm) of snow fell in Louisiana, Alabama, Mississippi, and even the northwest Panhandle of Florida. The largest daily accumulation on record fell in Dallas, Texas. The Dallas/Fort Worth National Weather Forecast office reported that 11.2 inches (28.4 cm) bested the old record of 7.8 inches (19.8 cm) set on January 15th, 1964 and January 14th, 1917. On February 13th every contiguous U.S. state had snow on the ground.

A strong storm brought heavy snowfall from the Rocky Mountain Front Range across the Southern Plains on March 19th–22nd, creating a white start to the beginning of spring. The snowfall, coupled with strong winds, caused near-blizzard conditions in Oklahoma, Texas, Arkansas, and Missouri. The storm brought over 20 inches (51 cm) of snow to portions of Wyoming, Colorado, and New Mexico. Accumulations over 10 inches (25 cm) were common across the rest of the Southern Plains, with portions of Missouri, Kansas, and Arkansas receiving over a foot (30 cm) of snow. This storm also topped off a very snowy season for the region. Oklahoma City, Oklahoma had its fifth snowiest winter with 23.3 inches (59.2 cm) of snowfall, and Wichita Falls, Texas had its snowiest season with 16.6 inches (42.2 cm).