The two satellite-derived images above show the daily snow cover across North America (left map) and the Northern Hemisphere (right map) throughout January 2009. The maps help illustrate the snow coverage expanding and contracting across the U.S. By the end of January, 47 percent of the country was covered by snow compared to 37 percent one month prior. Warmer temperatures in the western U.S. helped erode much of the snow pack that was seen in the beginning of the month.

On January 20th, a significant snowfall event occurred across the eastern third of North Carolina as a strong upper level disturbance spawned the development of a cyclone off the Southeast Coast. Raleigh and Plymouth, North Carolina reported over 6 and 4 inches (1.5 and 1.0 cm) of snow, respectively. Fayetteville, North Carolina received four inches of snow, the most in six years. The thin layer of snow was just enough to delight the children but vex commuters. Eastern areas of the Tarheel state received anywhere from a half an inch up to seven inches during the event. The associated upper-level disturbance produced locally heavy amounts of snow across northern Georgia and extreme western North Carolina. Dallas, Georgia, which is situated 25 miles northwest of Atlanta, received five inches (1.3 cm) of snow.

A major winter storm affected areas from central Texas northeastward into the New England states during the last week of January. As a low pressure system formed over the southern U.S., a cold arctic front dove southward resulting in a crippling ice storm that stretched from eastern Texas, into Northern Arkansas, and across Kentucky. As the low tracked toward the northeast, it pumped warm moist air on top of the colder air mass that was already in place. At least 0.25 inch (.1 cm) of precipitation fell in northern Arkansas where surface temperatures were cold enough to support freezing rain for the duration of the event. Heavier precipitation amounts were estimated to be anywhere from 2.78 inches (0.7 cm) in Mountain Home to 4.10 inches (1.0 cm) in Fayetteville. In Fulton County, ice around wires and cables was measured to be around 6 inches (1.5 cm) in circumference. As many as 10 fatalities were a direct result of the hazardous weather across the state of Arkansas. 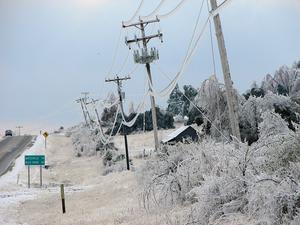 Kentucky was, perhaps, affected the most by the ice where as many as 24 people died and as many as 6,500 people were displaced according to CNN reports. The governor of Kentucky, Steve Beshear, called the storm the "biggest natural disaster" in the state's modern history. Beshear was forced to declare a state of emergency in 93 of the state's 120 counties. The storm caused 609,000 homes and businesses to lose power, exceeding a record that was set just five months prior by the remnants of Hurricane Ike. Precipitation totals varied greatly as the northern part of the state received around 1.5 inches (0.4 cm) of precipitation, while the southern part of the state received anywhere from 4 inches (1.0 cm) to 5.5 inches (1.4 cm). The cost of storm damage in western Kentucky alone, the worst-hit area of the state, is expected to top $10 million, officials said (Courier-Journal).

Further north and east the wintry precipitation fell as snow. Amounts topped 10 inches (1.5 cm) in portions of New Hampshire, New York, Vermont, Ohio, Pennsylvania and Maine. Sixteen inches of snow fell on Sunapee, New Hampshire, while Eminence, Missouri, collected five inches (1.3 cm) of ice and sleet. At the Indianapolis International Airport, 12.5 inches (3.2 cm) of snow fell from the 26th into the 28th. The amount tied for the 6th largest snowstorm in Indianapolis. The record snowfall for the Indianapolis area is 16.1 inches (4.1 cm) set in February 1910.

More information and pictures on this winter storm can be found on the special report pages listed below. These were created by the affected local National Weather Service sites.