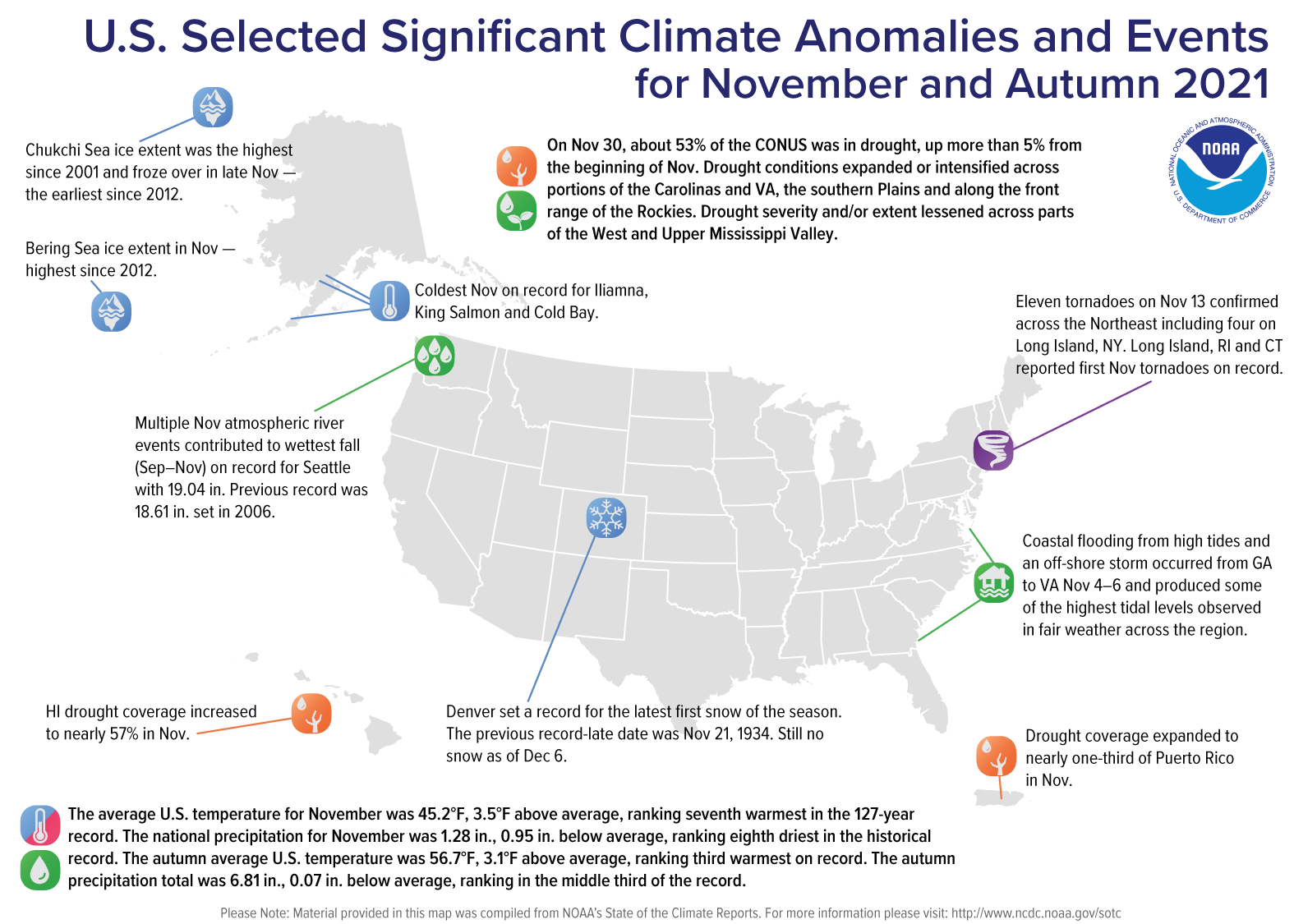 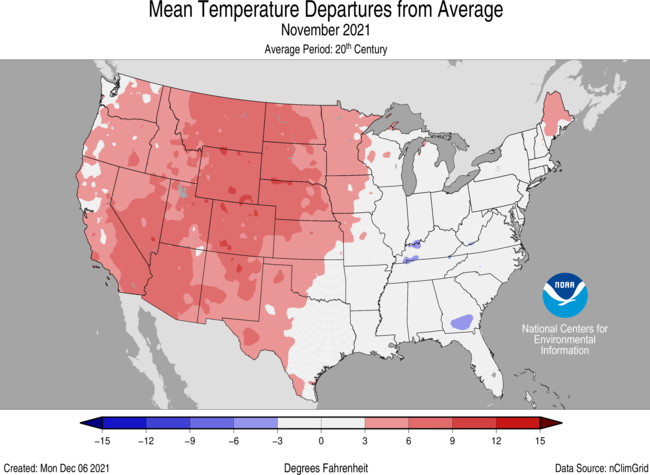 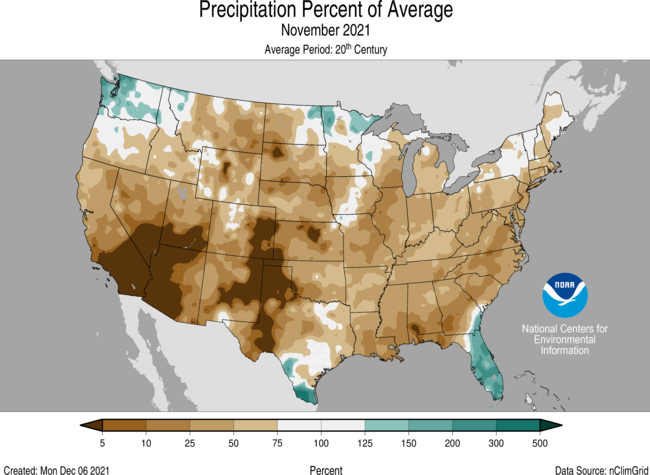 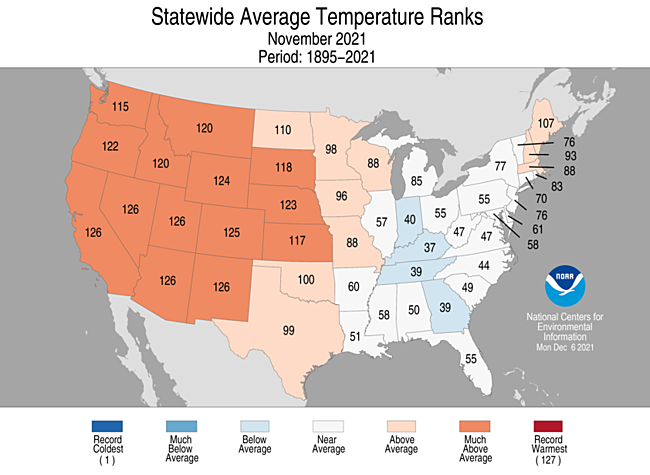 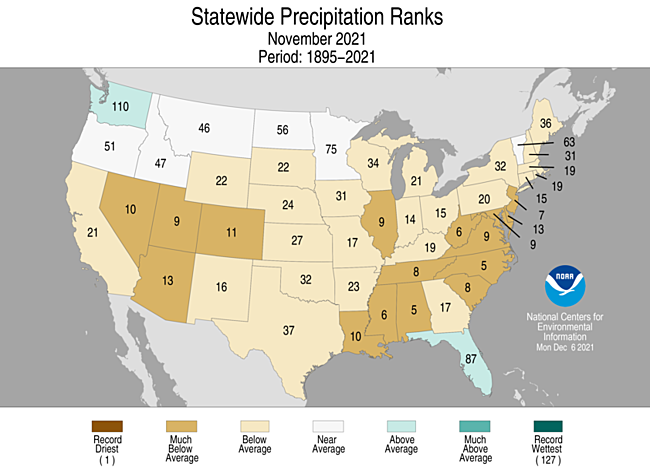 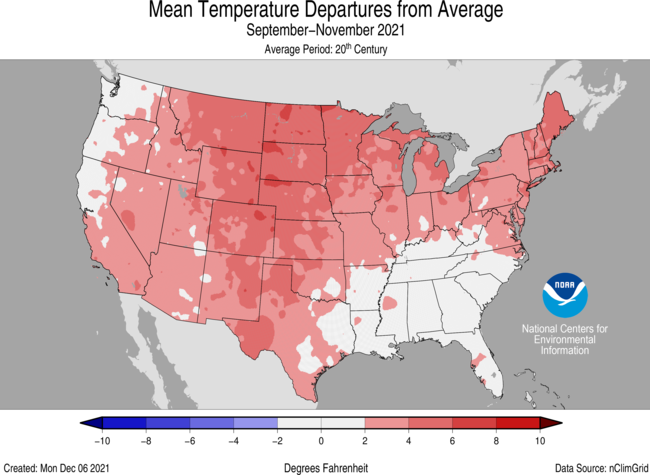 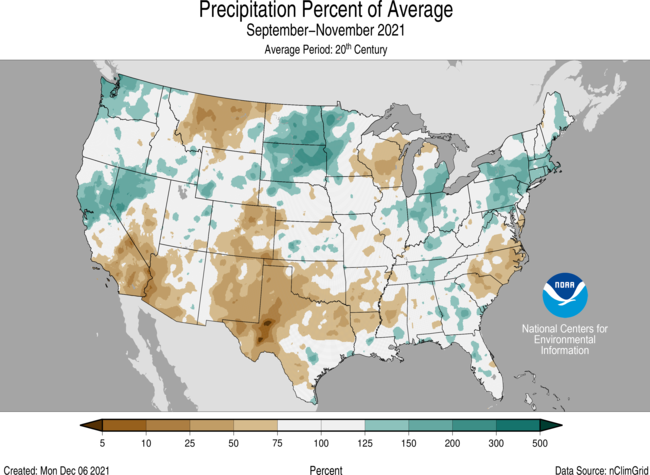 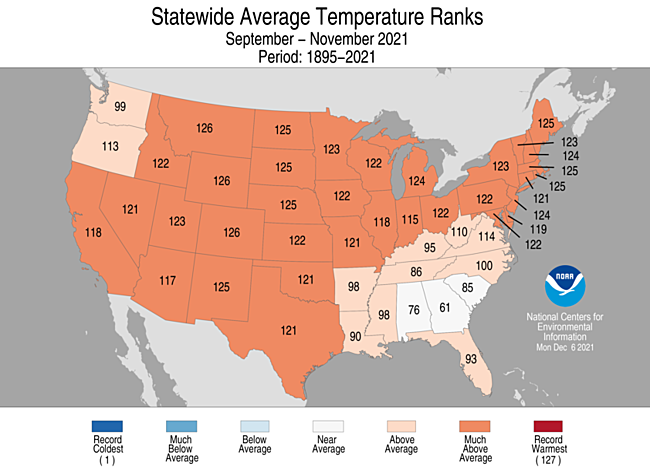 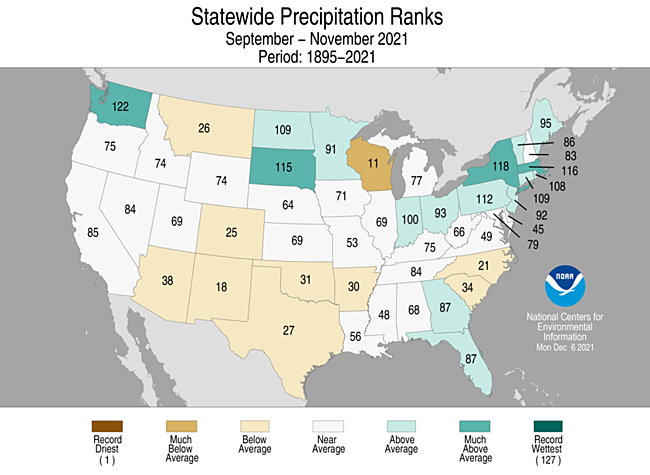 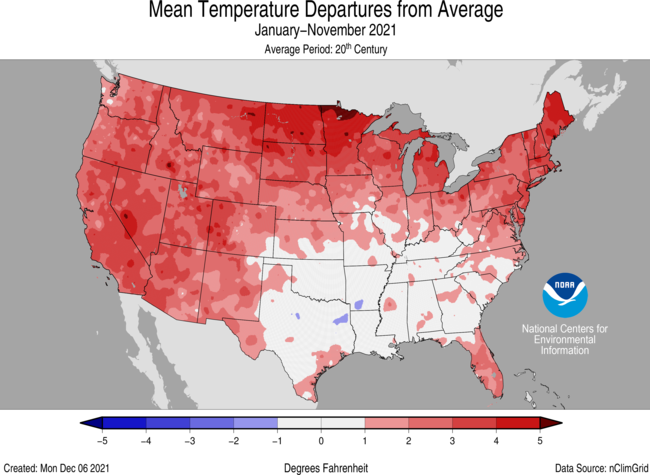 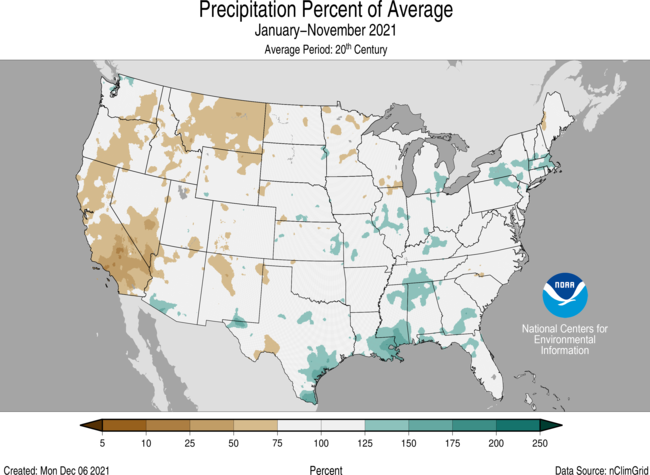 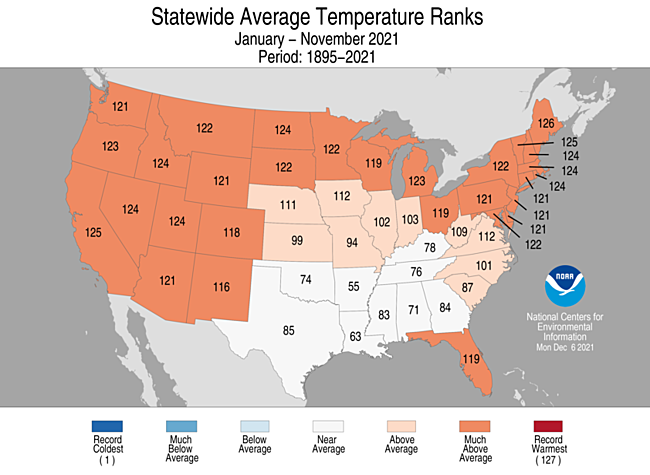 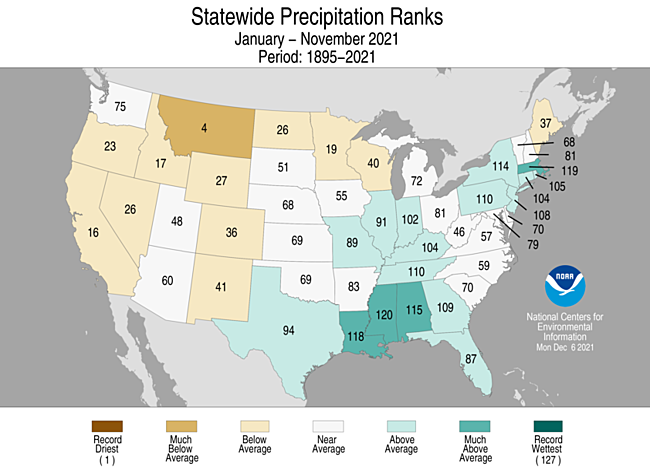 Warm and dry conditions were observed across the High Plains in November. Above-normal temperatures were observed across the entire region with the highest departures 10 degrees F (5.6 degrees C) and higher. Precipitation across the majority of the region was below-normal outside of a portion of northeast North Dakota and a few other isolated areas. These warm, dry conditions led to many impacts within our region. Horticulturists in Wyoming are concerned after noticing trees beginning to bud as a result of above-normal temperatures in November. While the early budding or blooming can be a pretty sight, it can be damaging to the trees. When blooming early, a sudden drop in temperatures can cause shock to the tree. It can also cause the tree’s flowers or fruits not to grow next year as they have exerted all of their energy in growing early. Concerns for tourism in western South Dakota have begun throughout November as it continues to be warm and dry in the region. Many commercial entities in the western portion of the state, such as the Black Hills, rely on business from winter sports. With the warm temperatures and lack of snow, opening dates have been pushed back without an indication of when they will be able to open. Warm temperatures have also impact¬ed their ability to create synthetic snow, as temperatures 28 degrees F (-2.2 degrees C) or below are needed. Winter crops have also been impacted by warm, dry conditions. In Kansas, warm temperatures have caused winter wheat to grow more than it should. The additional plant height can cause an increased chance of problems with plant diseases and pests. Around mid-November the crops begin to become dormant, but the warm temperatures have helped crops continue to grow using current soil moisture. With drought conditions present, use of stored soil moisture is a concern as farmers look toward next year’s crops.

November 2021 was mild throughout the Southern Region, ranking from 28th warmest for Oklahoma at 51.3 °F (10.7 °C) to 40th coolest for Tennessee at 45.7 °F (7.6 °C). Overall, the region was 48th warmest on record, with an average temperature of 54.4 °F (12.4 °C). One monthly maximum temperature record was set, at Panther Junction, Texas, in Big Bend National Park, where the temperature reached 92 °F (33.3 °C) on November 1. The highest temperature overall was 95 °F (35 °C) at Rio Grande Village, also in Big Bend National Park. No monthly low temperature records were set; the lowest temperature in the Southern Region was recorded at Mt. Leconte, Tennessee, with 7 °F (-13.9 °C). By the end of the month, most of Texas and Louisiana had not yet experienced any temperatures below freezing, unlike all of Oklahoma and Tennessee and most of Arkansas and Mississippi.

Across the region, precipitation ranked 13th driest historically. In order of rank were Mississippi (6th driest, 1.35 inches, 34 mm), Tennessee (8th driest, 1.56 inches, 40 mm), Louisiana (10th driest, 1.31 inches, 33 mm), Arkansas (23rd driest, 2.12 inches, 55 mm), Oklahoma (32nd driest, 0.92 inches, 23 mm), and Texas (1.13 inches, 28 mm). The largest reported rainfall total was at a station 17 miles NNE of Edinburg, in southern Texas, with 8.90 inches (226 mm). Nearby, Falcon Dam set a new record for the month of November with 3.80 inches (97 mm). Meanwhile, no measurable rainfall was recorded across a broad swath of the Texas and Oklahoma panhandles, with occasional reports of zero rainfall extending southward to the Rio Grande. For some stations near and west of Midland, there had not been measurable rainfall recorded since the first week of October.

The overall lack of rainfall led to a substantial expansion of drought conditions across the Southern Region. The percentage of the region in drought grew from 23% on November 2 to 42% on November 30, according to the US Drought Monitor. Severe drought expanded from 4% to 12% during the same period. Drought grew in all six states, particularly along the Lower Mississippi River valley and in central and western parts of Texas and Oklahoma. Drought improvement was confined mostly to northern and southern Texas. The impacts of drought were primarily agricultural, with problems establishing the winter wheat crop and cool season forage. The wildfire risk also remains elevated. With a weak to moderate La Niña likely to persist until spring, continued drying is likely, especially for Texas.

Severe weather on November 10 and 11 struck parts of the Dallas-Fort Worth, Oklahoma City, and Tulsa metropolitan areas, along with rural parts of northern Texas and central Oklahoma. Most of the severe weather was in the form of hail, with one report of 2 inch (5 cm) hail in Haynesville, Oklahoma and numerous other hail reports exceeding 1 inch (2.5 cm). The severe weather in the Tulsa area on November 11 was largely in the form of wind damage. One EF0 tornado touched down within Tulsa itself, about two miles southwest of downtown, uprooting trees and damaging limbs. Two other EF0 tornadoes touched down on the eastern outskirts of the city. That same day, four tornadoes struck east Texas and northwest Louisiana near Marshall and Shreveport. Two of the tornadoes were rated EF1; the other two were EF0. Lastly, November 21 brought 1.25 inch (3 cm) hail to the vicinity of Diaz in northeastern Arkansas. No injuries were reported from any of the severe weather.