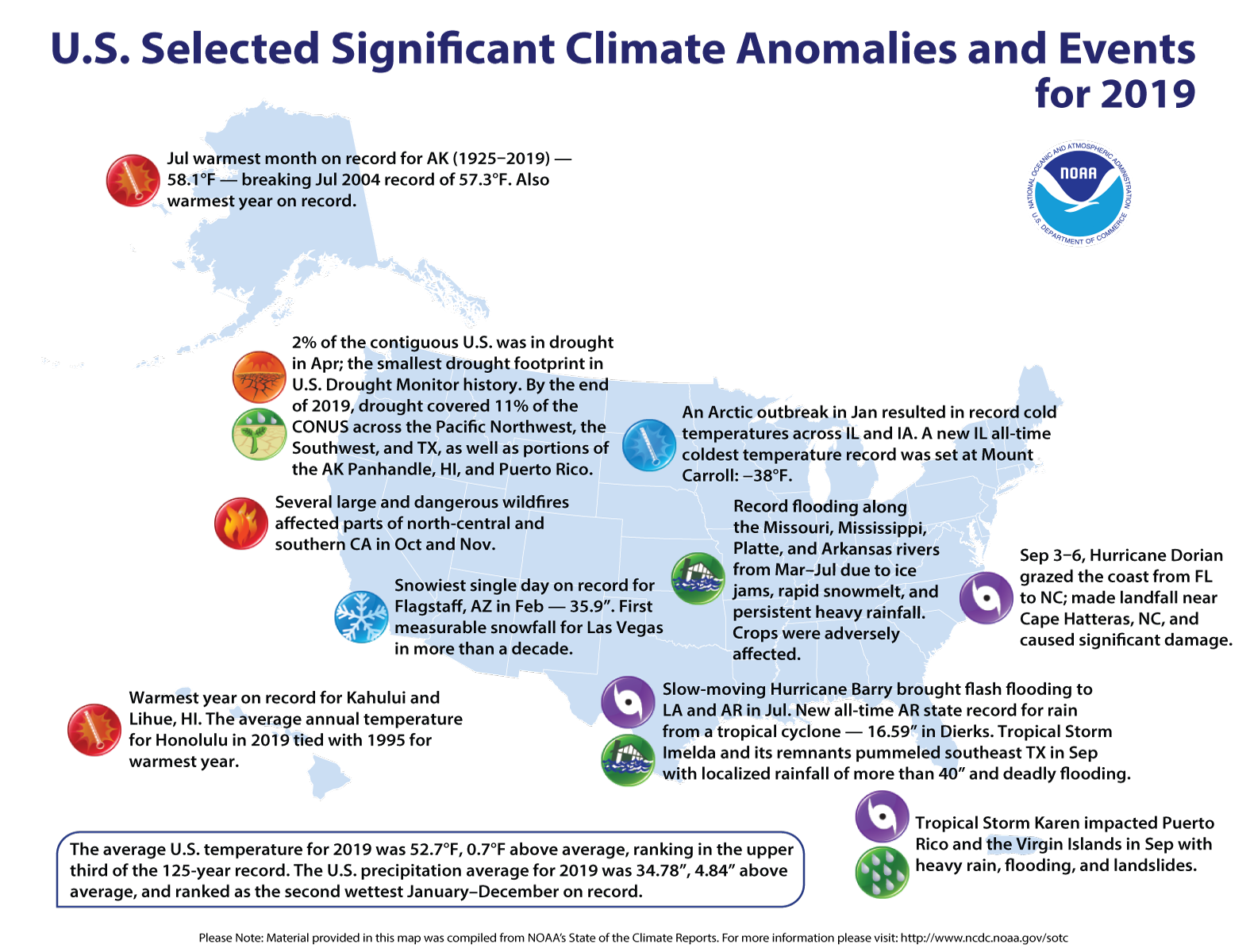 Issued 14 January 2020: Unless otherwise noted, temperature and precipitation rankings refer to a 125-year period of record (1895-2019), and long-term average refers to the 20th century (1901-2000) value. Data for 2019 should be considered preliminary. The most up-to-date temperature and precipitation data is available through Climate at a Glance. 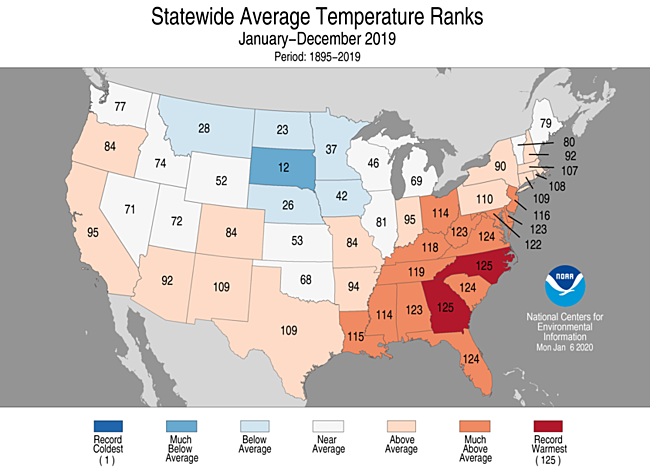 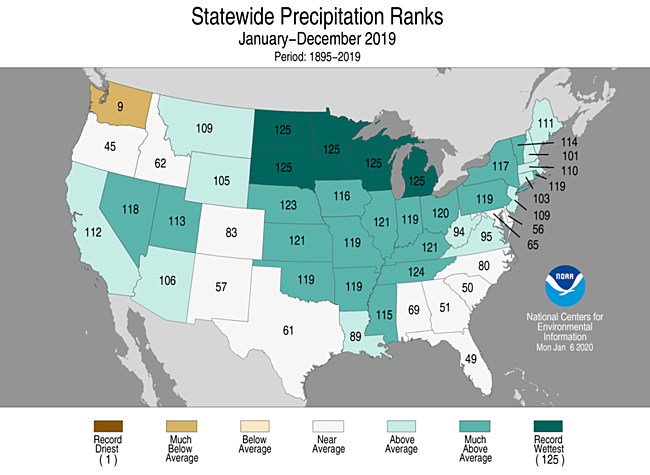 Based on preliminary analysis, the average annual temperature for the contiguous U.S. was 52.7°F, 0.7°F above the 20th century average. This ranked in the warmest third of the 125-year record and was the coldest year since 2014. Below-average temperatures, particularly daytime temperatures, were observed across the northern Plains, while above-average to record-warm overnight temperatures dominated across the Southeast and Mid-Atlantic.

Parts of the West, South, and much of the Southeast, Ohio Valley, Mid-Atlantic, and Northeast experienced above- to much-above-average temperatures during 2019. Georgia and North Carolina ranked record warmest while Florida, South Carolina and Virginia each had their second warmest year on record. Below-average temperatures were observed across the northern Plains with South Dakota ranking 12th coldest for the January-December period.

The nationally averaged maximum temperature (daytime highs) was near average for 2019 at 64.1°F, 0.1°F above average, ranking as the middle third of the 125-year record and the coolest daytime high temperatures for any year since 1997. Parts of the Northern Rockies and Plains and western Great Lakes were below-average for the year with South Dakota tying with 1996 as second coldest. Only the daytime temperatures of 1951 were colder. Much of the South, Southeast, Mid Atlantic and parts of the Northeast were above-to much-above average during 2019.

The nationally averaged minimum temperature (overnight lows) during 2019 was 41.2°F, 1.2°F above average and ranked in the warmest third of the 125-year record. Alabama, Georgia, South Carolina and North Carolina each ranked warmest on record with eleven additional states' minimum temperatures ranking among their warmest 10 years on record.

Influenced by warm ocean temperatures, many locations across Hawaii experienced a near-record- to record-warm year in 2019. Kahului and Lihue were record warm, while Honolulu tied with 1995 for warmest year on record.

The contiguous U.S. average annual precipitation was 34.78 inches, which is 4.84 inches above the long-term average, the second wettest year on record and 0.18 inch less than the total for the wettest year set in 1973*. Record precipitation fell across the northern Plains, Great Lakes and portions of the central Plains. Ten of the last twelve 12-month periods were record wet with the top seven all-time wettest 12-month periods occurring during 2019.

Above-average annual precipitation was observed across much of the nation. North Dakota, South Dakota, Minnesota, Wisconsin and Michigan each had their wettest year on record during 2019, with much of the central U.S., Northeast and parts of the West experiencing above- to much-above-average precipitation. Below-average precipitation fell across the state of Washington, which had its ninth driest year on record. It was also dry to much drier than average across parts of southern Texas and the Gulf of Mexico coast.

According to the December 31 U.S. Drought Monitor, released on January 2, approximately 11 percent of the contiguous U.S. was in drought. In April, the drought footprint across the contiguous U.S. was the lowest in the 20-year USDM history at 2.3 percent coverage. By the end of 2019, drought was entrenched across the Southwest, Texas, the Pacific Northwest and across portions of the Alaskan Panhandle, Hawaii and Puerto Rico. During March, California was drought-free for the first time since December 2011. 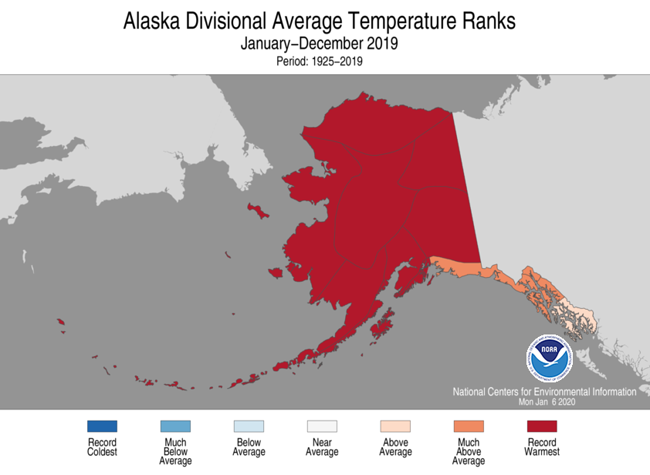 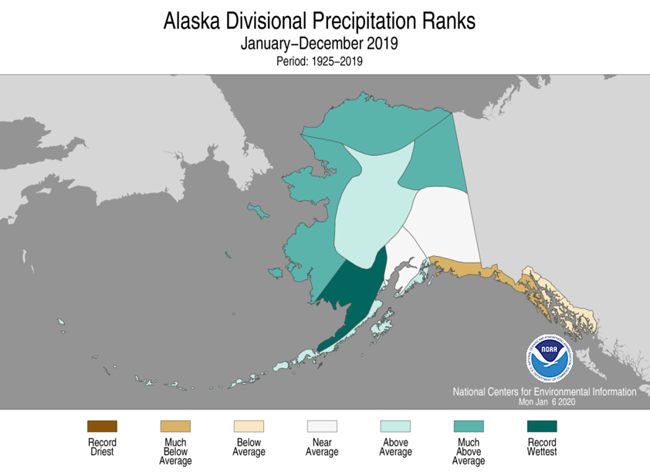 Despite a more seasonable December across much of the state, Alaska had its warmest year on record with a statewide average temperature of 32.2°F, 6.2°F above the long-term average and the first annual average temperature on record at or warmer than freezing (32°F). This surpassed the previous record of 31.9°F in 2016. Four of the last six years across Alaska have been record warm for the state. Utqiaġvik, Kotzebue, King Salmon, Fairbanks, Bethel, Anchorage, Northway, McGrath, Kodiak and Cold Bay each experienced their warmest year on record. Record to near-record warmth occurred across northern and central parts of the state with the most mild, yet above-average, temperatures confined to the western Aleutians and eastern Panhandle. Bettles had its second highest annual snowfall with 140 inches for the year. In July, Anchorage reported its first 90°F temperature on record.

Precipitation received across Alaska during 2019 was variable by region with the northeastern, northern, western and southwestern portions of the state receiving above average precipitation. Much of the Northeast Gulf and Panhandle regions experienced below average precipitation for the year, which contributed to extreme drought conditions, especially during the summer and into the autumn months. Precipitation received across the Panhandle during October helped to eliminate the severe and extreme drought which had been in place for much of the year.

In 2019, there were 14 weather and climate disaster events with losses exceeding $1 billion each across the United States: three inland flooding events, eight severe storm events, two tropical cyclone events (Dorian and Imelda) and one wildfire event.

For additional details regarding these highlights, please see the following pages:

*Temperature and precipitation values and ranks are based on preliminary data. Additional data received and processed after the release of this summary may result in small differences for annual values and ranks.