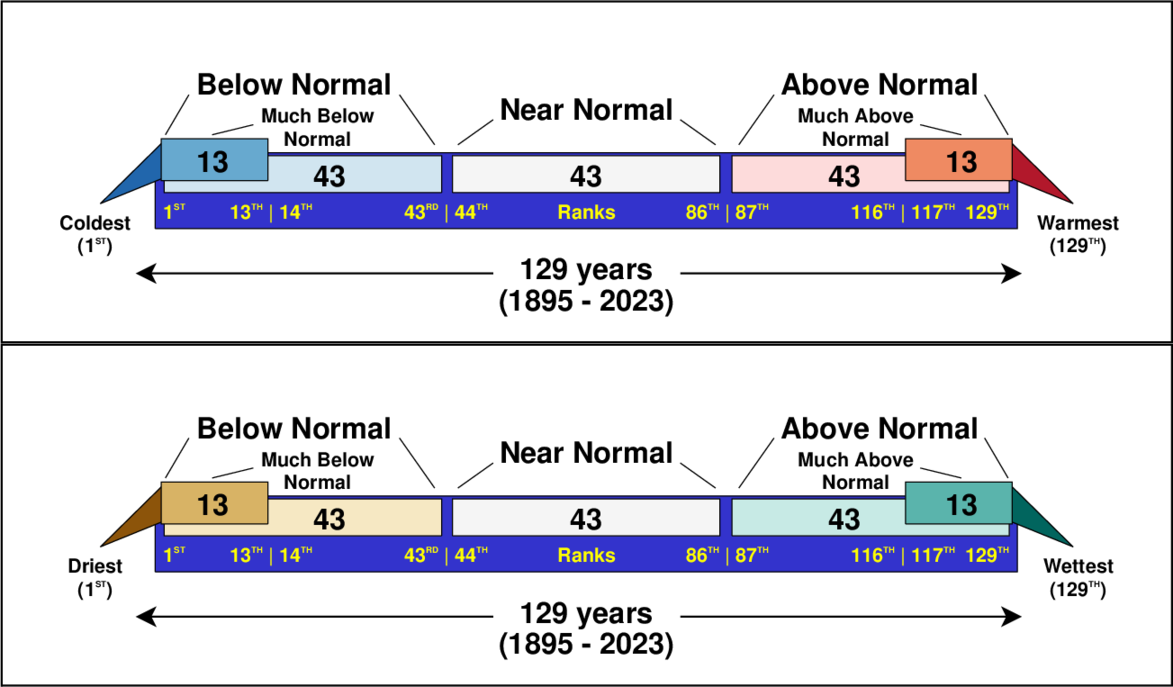 In order to place each month and season into historical context, NCEI assigns ranks for each geographic area (division, state, region, etc.) within the contiguous U.S. based on how the temperature or precipitation value compares with other values throughout the entire record when sorted from lowest to highest value. In other words, the numeric rank value within the area represents the position or location of the sorted value throughout the historical record (1895-present). As a year is added to the inventory, the length of record increases. As of 2021, NCEI has 127 years of records. Thus a rank of 127 would represent the warmest or wettest on record; a rank of 1 would represent the coolest or driest on record. If a state has a rank of 109, then it would be the 19th warmest or wettest on record. If a state rank has a value of 19, then that state ranked 19th out of 127 years, or 19th coolest or driest.

The "Below Normal", "Near Normal", and "Above Normal" shadings on the color maps represent the bottom, middle, and upper tercile (or three equal portions) of the distribution, respectively. The lowest and uppermost decile (or 10%) of the distribution are marked as "Much Below Normal" and "Much Above Normal", respectively. In other words, for a 127-year period (1895-2021), a rank of Much Above/Below Normal, would be in the top/bottom 13 on record. Below/Above Normal, would represent one of the 42 coolest/warmest or driest/wettest such periods on record. "Near Normal" would represent an average temperature or precipitation value that was not one of the 42 coolest/warmest or driest/wettest on record. For a 127-year period of record, "Near Normal" would represent a rank between 43 and 85. 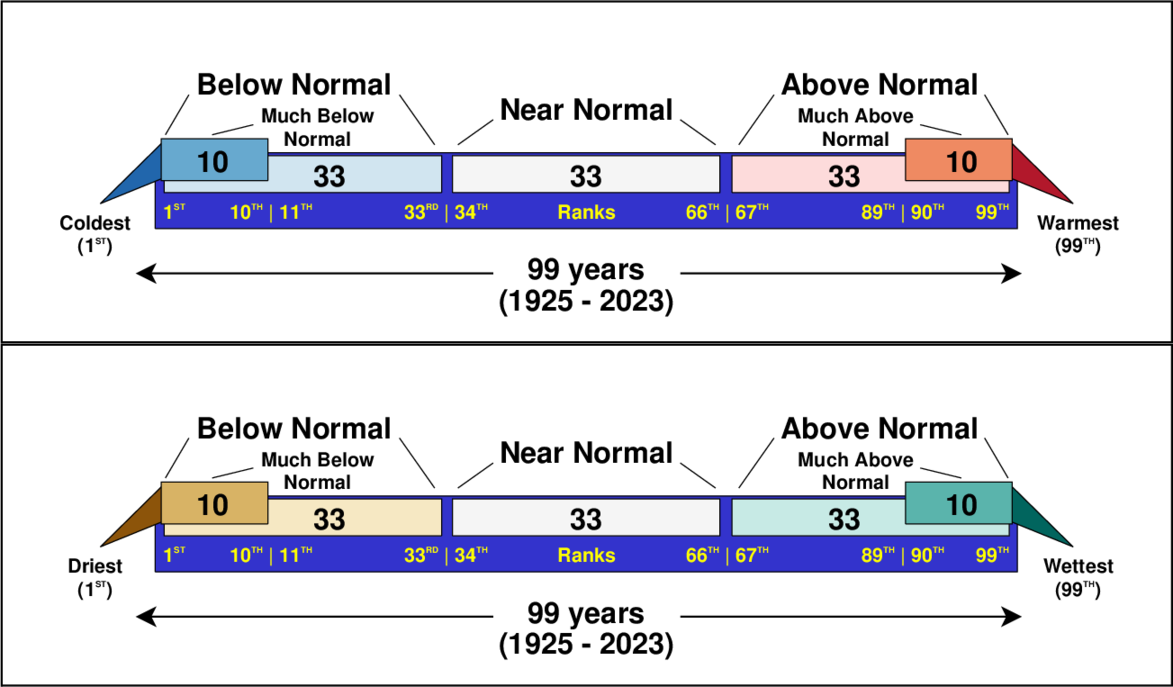 For Alaska, the historical record begins in 1925 and thus, rank values are different than those used for the contiguous U.S. With 97 years in the record (1925-2021), a rank of Much Above/Below Normal would be in the top/bottom 10 on record. Below/Above Normal would represent one of the 32 coolest/warmest or driest/wettest such periods on record. "Near Normal" would represent a rank between 33 and 65.

Beginning with January 2010 processing, the Alaska temperature and precipitation report is comprised of several datasets at NCDC, integrating GHCN and COOP datasets. Prior to 2010, the Alaskan temperature timeseries was processed with just GHCN data.

Corn planting proceeded on a record pace with 50 percent of the nationwide crop planted by April 25th. The previous high was 37 percent since 1974 when records began. Midwest states were also at record paces with planting going very quickly especially in the latter half of April. As of April 25th, Kentucky had 74 percent of its corn planted, Illinois 73 percent, Missouri 69 percent, Iowa 68 percent, Minnesota 63 percent, Indiana 56 percent, Ohio 45 percent, Michigan 32 percent, and Wisconsin 20 percent. Wisconsin was 13 percent ahead of the past 5-year average, Kentucky, Ohio, Michigan, and Missouri were 20 percent to 40 percent ahead of the average, and Iowa, Illinois, Indiana, and Minnesota were more than 40 percent ahead of the average.

See NCDC's Monthly Records web-page for weather and climate records for the month of May. For additional national, regional, and statewide data and graphics from 1895-present, for any period, please visit the Climate at a Glance page.

PLEASE NOTE: All of the temperature and precipitation ranks and values are based on preliminary data. The ranks will change when the final data are processed, but will not be replaced on these pages. Graphics based on final data are provided on the Climate Monitoring Products page and the Climate at a Glance page as they become available.

NOAA National Centers for Environmental Information, State of the Climate: National Climate Report for April 2010, published online May 2010, retrieved on November 28, 2021 from https://www.ncdc.noaa.gov/sotc/national/201004.