The tropical savannas of northern Australia — where the country's largest and most frequent fires ignite — experienced the increase of bushfires associated with the latter part of the spring. The flammability potential of the dry season for the northern region typically peaks in November. Because the northern region's dried grasses, twigs, and leaves are subject to continuous decomposition by fungi and bacteria, the fires in the Cape Fear Peninsula woodlands tend to be less severe than ones occurring in southern Australia. Fewer fungi and bacteria exist in southern Australia, which allows leaf litter and other fuels to accumulate for decades.

Severe rainfall deficits persisted across much of South Australia for the August through November 2012 period. Conditions in Southern Australia, which observed the third driest spring during its 113-year period of record and a November rainfall of 54% below-average, were conducive to wildfire activity. A bushfire in South Australia on the Eyre Peninsula, which destroyed two homes, several vehicles, and at least 14 structures at a campground, burned nearly 5,000 acres of scrubland and crops, according to media reports. As many as 300 sheep perished in the blaze near Tulka and some wildlife were injured as well, before the fire was contained on November 13th. Local fire service volunteers helped to rescue koalas and kangaroos. Later in the month, as thunderstorms moved across South Australia over 31,500 lightning strikes were reported and as many as 300 fires were sparked. A 4,200-acre bushfire burning near Port Lincoln produced heavy smoke, which disrupted the bus transportation for area schools, and its flames threatened homes and electrical infrastructure. The fire was fueled by stumps and logs in an area of sugar gum trees that are indigenous to the Eyre Peninsula, which had not undergone a bushfire in about 50 years, according to media reports.

A wildfire ignited in central New Zealand on November 28th, but was quickly contained after burning only about four acres of scrubland.

Several mountain locations in Bulgaria set new temperature records during the month as an autumn inversion warmed the peaks of the Stara Planina ranges, Vitosha, and Rhodope Mountains on November 13th. The daily maximum temperatures reached 11.3°C (52.3°F) at Botev Peak, 12.8°C (55.0°F) at Cherni Vrah, and 18.3°C (69.4°F) at Rozhen, according to media reports. Hot days occurred later in the month, with 15 record high temperatures being broken on November 30th. In northern Bulgaria, the city of Lovech's maximum temperature of 22.4°C (72.3°F) was a new daily record, while also being the hottest location in the country that day.

High energy demand during a heatwave in Argentina resulted in a failure of two high voltage lines, which led to a power loss for over one million homes and created major disruption of traffic in Buenos Aires on November 7th. The city experienced at least three days with temperatures above 32.2°C (90.0°F) before cooler temperatures with rain arrived. On November 8th, the minimum temperature cooled only to 25.0°C (77.0°F), according to media accounts. 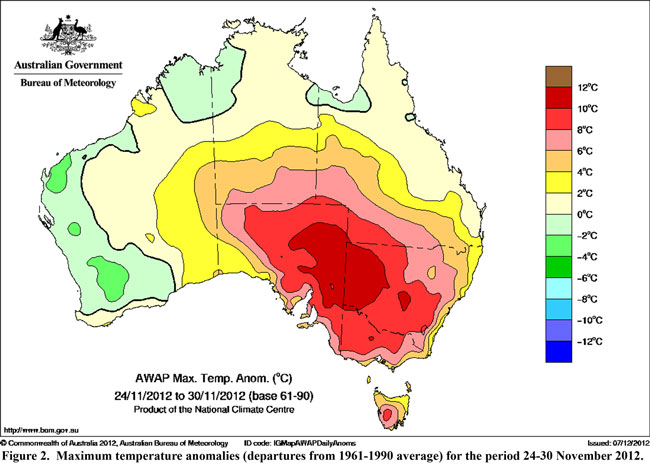 Elsewhere in the Southern Hemisphere, another intense heatwave occurred during November in eastern Australia. Maximum temperatures were above-average for most of the country, and the exceptional spring heat across central and southeastern Australia from November 24th-30th greatly contributed to the anomalies. The country experienced its sixth-warmest November and second-warmest spring in 63 years of record. November 29th was the hottest November day on record for 18 long-term stations in the states of Victoria, New South Wales (NSW), and South Australia, at locations having between 42 and 101 years of observations. Record high minimum temperatures occurred at a number of sites along the NSW and Victoria border as well as places in Tasmania. Moist air advection triggered severe thunderstorms in western Victoria, where large hail, strong winds, and flash floods hit the city of Ballarat (located northwest of Melbourne) on November 30th. Fallen trees damaged homes and blocked roadways around the area, according to media reports.

Early in the month, northern France experienced heavy rains that resulted in flooding of more than 200 homes along the coast of the English Channel. As much as 50 cm (about 20 inches) of water stood in the streets of 60 towns, according to media reports. Rivers in the region of Nord Pas-de-Calais rose significantly, with the Liane River reaching its record-high level of 4.47 m (14.6 ft).

Tributaries to the Danube River overflowed their banks following days of heavy rain in south-central Europe. In Slovenia, more than 2,000 buildings were damaged by flooding, the rail transportation between Celje and Velenje was disrupted, and water systems were contaminated. On November 5th, residents were evacuated from the country's second-largest city, Maribor, as well as from several towns and villages. In northern Croatia, the Drava River flooded at least 100 homes and forced evacuation of about 300 people on November 6th.

Torrential rains and wind battered parts of north and central Italy from November 10th-13th leading to devastating floods and at least four fatalities in Tuscany. About 800 residents were evacuated and thousands of households lost power, while vineyards and olive groves were swept away. The run-off produced when nearly 228 mm (9 inches) of rain dropped in four hours caused local rivers to overflow, according to media reports. Several bridges collapsed, highways between Rome and Florence were closed, and rail services between Orbetello and Grosetto were suspended as a result of the worst flooding in decades. As much as 149 cm (about 5 ft) swamped most of the city of Venice, marking the sixth-highest level since records began in 1872.

The official hurricane season (June 1st-Nov 30th) came to a close in the Atlantic Basin during November. Nineteen named storms formed in 2012, which are seven more storms than the historical average. Please visit NOAA's visualization link for an animation of the 2012 hurricane activity and the Hurricanes and Tropical Storms page for detailed information. 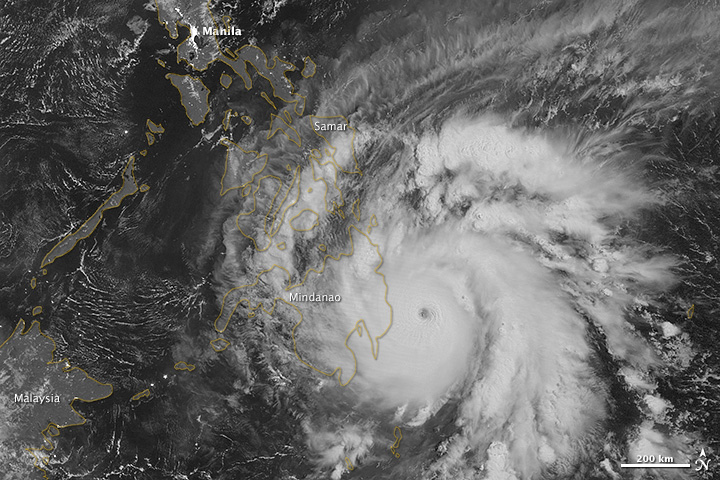 In the Western Pacific basin, Typhoon Bopha (a.k.a. Pablo; Nov 25th–Dec 9th) made landfall on the Philippine island of Mindanao on December 4th. Bopha formed unusually close to the equator for a storm of its strength and underwent rapid intensification during its westward approach to the southern Philippines. The Category 5 storm was the strongest ever to hit the island, which is the same region where Tropical Storm Washi casued over 1,300 fatalities in December 2011. The catastrophic cyclone, Bopha, resulted in over 900 deaths and more than 600 people missing, according to media reports. Losses of infrastructure, agriculture, and property were estimated at nearly $348 million U.S. dollars. More than 34,000 acres (roughly 20 percent) of Mindanao's banana plantations were destroyed as well as thousands of acres of coconut trees and rice fields. The Philippines are the world's third-largest banana exporter.