Drought conditions across the US
as of 01 May 2012
Source: USDM

Drought conditions gripped parts of the contiguous United States during April 2012. As of May 1st, 2012, 32 percent of the contiguous United States experienced moderate to exceptional drought, with 17 percent experiencing severe to exceptional drought, according to the U.S. Drought Monitor (USDM). Exceptional drought affected parts of western Texas, southeastern New Mexico, and across parts of Florida, Georgia, Alabama, and South Carolina. Conditions deteriorated across portions of the Carolinas and Georgia where less than 0.5 inch (12.7 mm) of precipitation fell. Please visit the US Drought page for additional information.

Copious rain fell across Western Province of Rwanda (located in central Africa) on April 12th, 2012, prompting flash floods. The floods inundated nearly 1,000 hectares of potatoes, maize, bananas, tea, and sugar, leading to food insecurity. Over 700 houses were either destroyed or damaged and nearly 11,000 people were affected. 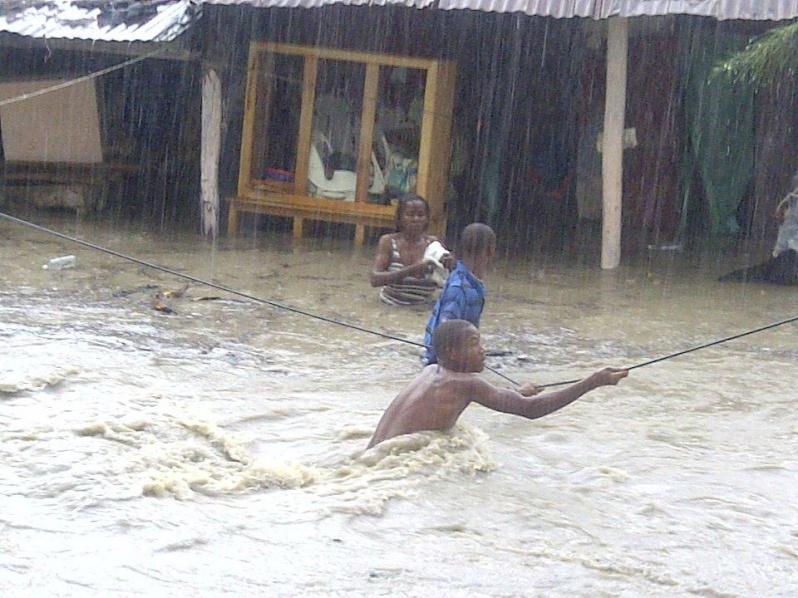 Regions of Haiti submerged from
rains during 23–24 April 2012
Source: ReliefWeb

Heavy downpours during the week of April 23rd in Haiti and the Dominican Republic prompted deadly floods and mudslides, affecting over 3,400 families in Haiti and more than 11,000 people in the Dominican Republic. Many of Haiti's improvised shelters are located in low-lying areas, resulting in some of them being flooded continuously, prompting concerns of sanitation risks to the population. According to reports, the copious rain claimed 16 lives across parts of southwestern and southern Haiti, with two people killed in landslides and the rest while trying to cross flood waters. Meanwhile, no fatalities or injuries were reported in the neighboring country of Dominican Republic. However, nearly 3,000 houses were damaged by the floods across northern and northeastern Dominican Republic. Torrential rain also fell across eastern Jamaica, flooding streets.

The Union of Comoros, which are islands located between northwestern Madagascar and eastern Africa, experienced torrential rains during mid-April. The heavy downpours caused severe floods and landslides, affecting over 46,000 people. According to reports, the floods damaged nearly 50 schools throughout the nation, and left three people dead and an estimated 100 people injuried. 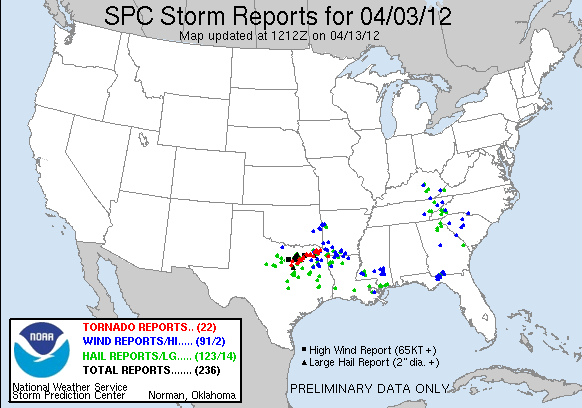 Severe thunderstorms spawned 17 devastating tornadoes across much of northern Texas on April 3rd, 2012, wreaking havoc across the affected area. The tornadoes destroyed homes, tossed tractor-trailer trucks, and left 17 people injured. One of the hardest hit areas was the densely populated area of Dallas, where two tornadoes (one rated an EF2 tornado and the other an EF0) ripped through the area, damaging 300 structures. According to the NWS, the EF2 tornado's maximum path width was 200 yards and had a length of 7.1 miles with estimated wind speeds of 130 mph (209 km/hr). The storms also produced two inch diameter or greater size hail, damaging more than 100 planes and canceling approximately 400 flights at Dallas/Fort Worth International Airport, leaving thousands of passengers stranded.

Bouts of severe weather continued to affect parts of the contiguous United States in April 2012. Severe storms on April 13th–15th produced nearly 150 preliminary tornadoes, large hail (3 inches in diameter), and strong winds, affecting portions of the central United States. An EF1 tornado touched down in Norman, Oklahoma near the University of Oklahoma campus, causing a few minor injuries and some property damage. Meanwhile, the town of Thurman, Iowa was hit by an EF2 tornado, leaving 75 percent of the town destroyed. An EF3 tornado caused over $280 million in damages across southeastern Wichita, Kansas, leaving 90 mobile homes damaged and, according to reports, destroying a building at a Spirit Aerosystems plant. The only deadly tornado was reported in Woodward Oklahoma, where six fatalities were reported. The tornado damaged or destroyed nearly 100 homes and buildings, and brought down trees and power lines. The governors of Kansas and Oklahoma declared states of emergency.

A severe storm brought strong winds and hail to northern provinces in Vietnam on April 20th. The strong winds blew roofs off homes and damaged over 4,500 homes and crops. Two people died when their house collapsed over them.

An unusuall late spring storm brought heavy snow to parts of the northeastern United States on April 23rd–24th, dumping nearly a foot of snow across some areas. The storm also brought strong winds to the affected areas, with LaGuardia Airport in New York observing a 54 mph (87 km/hr) wind gust—equivalent to a tropical storm. The vicious winds brought down power lines, leaving over 75,000 people without any power across Pennsylvania and upstate New York.

NOAA National Centers for Environmental Information, State of the Climate: Global Hazards for April 2012, published online May 2012, retrieved on May 18, 2021 from https://www.ncdc.noaa.gov/sotc/hazards/201204.