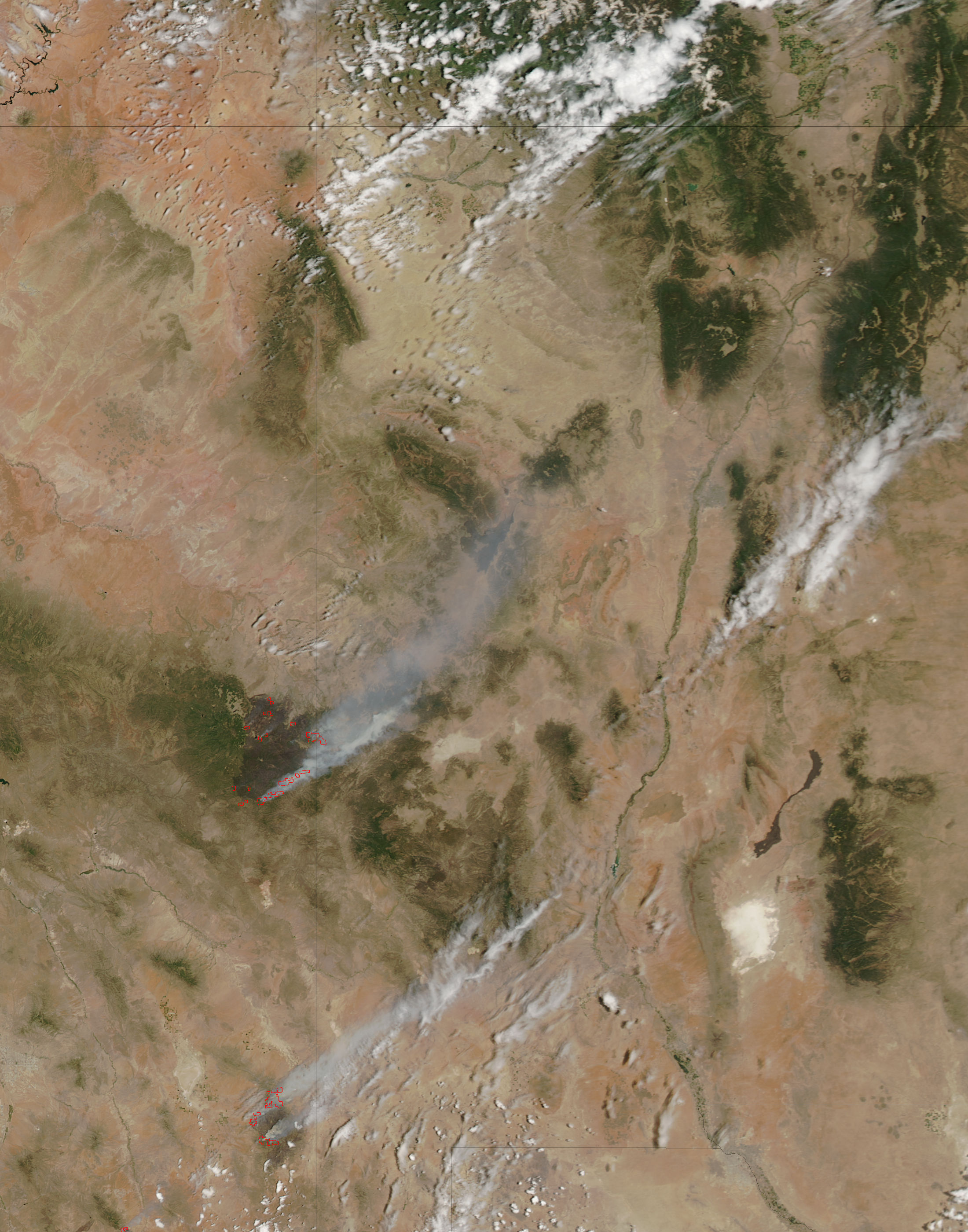 Several large wildfires burned in the southern and southwestern United States during the month of June. In Arizona, the Wallow fire started on May 29th in the Apache-Sitgreaves National Forest and became the largest wildfire in Arizona's history on June 13th as it surpassed the Rodeo Chediski fire in 2002 that burned 468,638 acres (189,651 hectares). By July 6th, the blaze had consumed 538,049 acres (217,741 hectares), led to the evauation of thousands of residents in several towns, and destroyed 32 homes. South of Sierra Vista near the Mexico border, the Monument fire broke out on June 12th, burning 30,526 acres (12,353 hectares) and destroying at least 44 homes. Nearly 7,000 residents were forced to evacuate the area. Also in southern Arizona, the Loop fire burned at least 30,400 acres (12,300 hectares) over a four-day period and forced the sudden closure of Carlsbad Caverns National Park on June 13th; 200–250 visitors were evacuated from the inside the caves. The popular national park remained closed for three days. Winds died down on June 20th in Arizona, but conditions worsened in eastern Texas, where a wildfire destroyed 35 homes and led to the evacuation of 1,800 residences and businesses. In New Mexico, the Las Conchas wildfire near Los Alamos began on June 26th and quickly became the state's largest wildfire on record. On July 1st, it surpassed the Dry Lakes fire that burned 94,000 acres (28,040 hectares) in 2003 and by July 6th had burned 130,691 acres (52,889 hectares) and destroyed 63 homes, according to InciWeb. More detailed monthly information about wildfires in the United States during the month is available in NCDC's June 2011 Wildfire report.

The wildfires in the southern and southwestern U.S. were due in large part to dry conditions over the past few months. According to the U.S. Drought Monitor (USDM), almost 62 percent of Arizona was suffering from moderate to exceptional drought conditions and the entire state of New Mexico was experiencing some level of drought. Most of Texas was also suffering from drought; 71.3 percent of the state was under exceptional drought conditions—the highest level, as determined by the USDM. The drought was due to a combination of very warm temperatures and lack of precipitation. In Texas, no rain fell during June in Midland, and from October 2010 through June 2011 only 0.18 inches (4.6 mm) of rain fell over the city, making this by far its driest nine-month period on record. The second driest nine-month period occurred during November 1950–July 1951 with 2.02 inches (51.3 mm) of precipitation. In addition to the lack of rain during June, Midland recorded 22 days of temperatures surpassing 100°F (38°C). In Houston, 26 days in June reached more than 95°F (35°), with two of those days hitting the 105°F (41°C) mark—the hottest temperature ever recorded during June in that city. It was Houston's warmest June on record, with an average temperature of 86.2°F (30.1°C), breaking the previous record of 85.9°F (29.4°C) set in 1906. It was also the warmest June on record for the entire state of Texas since records begans in 1885. La Niña occurred from July 2010 through May 2011; La Niña conditions typically bring warmer-than-average and drier-than-average conditions to the southern tier of the United States. Conditions returned to neutral in June. More detailed monthly information about drought conditions and temperatures in the United States during the month is available in NCDC's June 2011 Drought and National Overview reports, respectively.

Record and near-record warm temperatures dominated the eastern half of the United States near the beginning of June. Five deaths—in Wisconsin, Tennessee, and Maryland—were attributed to to the heat. Milwaukee, Wisconsin reached a record high temperature of 97°F (36°C) on the 7th, breaking the previous record of 95°F (35°C) set in 1933. That same day, Memphis, Tennessee, where two of the fatalities occurred, recorded a high temperature of 98°F (37°C), breaking the old record of 96°F (36°C) set in 1953. In fact, Memphis toppled maximum temperatures records every day from the 4th through the 8th. In Minneapolis/St. Paul, Minnesota, the temperature soared to 103°F (39°C), shattering the previous record of 95°F (35°C) set in 2004. This was the warmest day on record for the region since July 31st, 1988 and second warmest in the past 69 years. Fortunately, no heat-related deaths were reported in Minnesota during this time. 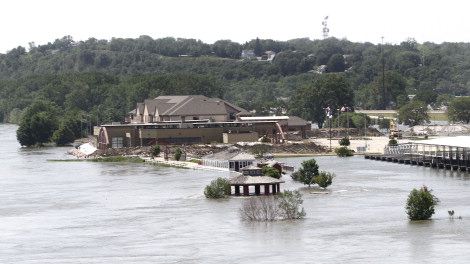 Record winter snowfall and subsequent above-normal snowpack melt, combined with heavy spring rains, led to major flooding along the Missouri River in the midwestern United States during June. The U.S. Coast Guard closed a 293-kilometer (182-mile) long section of the river near Sioux City, Iowa and southward on the swollen river. Flash flooding forced the evacuation of all residents—about 1200 people—in the town of Hamburg. Flooding along the river was expected to continue into August. 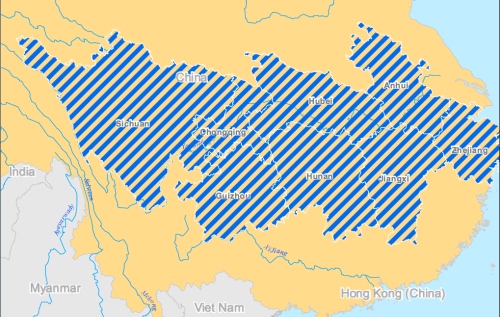 Flooding across central and southern China during June affected hundreds of thousands of residents in several provinces, killing at least 261 people during the first three weeks of the month. In southwestern Guizhou province, from June 3rd to 6th, at least 14 people were killed and 270,000 others were impacted by floods in the region. Nineteen people were killed in Xianning city (Hubei province) as rivers rose by five meters (16 feet), and 15 people were killed in Yueyang (Hunan province) on June 9th due to torrential rainfall and subsequent floods and landslides. Prior to the rains, Hubei and Hunan provinces had been among the hardest hit by a recent severe drought that affected millions of acres of farmland. Between June 3rd and 20th, more than 1.6 million residents had to be evacuated from their homes due to floodwaters. In Zhejiang province, several rivers were at or near record-high levels. The Lanjiang river rose to 110 feet (34 meters), its highest level since 1966. Several sections of dikes in Lanxi city, through which the river runs, were at risk of overflowing, as all residents within those areas were forced to flee their homes. Zhejiang province alone sustained an estimated 7.69 billion yuan ($1.19 billion U.S. dollars) in direct economic losses as 600,000 acres (241,600 hectares) of cropland were flooded and more than 1,800 companies were forced to a halt. Heavy summer rains and flooding are common in China. 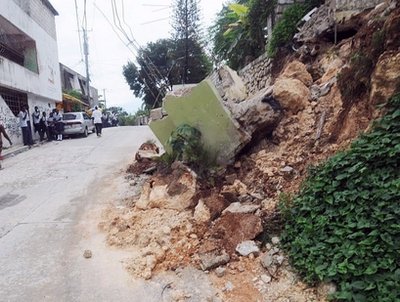 In the Caribbean, a week of torrential rains during the first week in June culminated in flooding and mudslides in Haiti. A six-hour period on June 7th brought four to six inches (100 to 150 mm) of rain along the Haiti/Dominican Republic border, drenching an already waterlogged region. At least 25 people were killed and six others were reported missing around Haiti's capital city of Port-au-Prince as mudslides caused houses and shanties to collapse. Flooding was also reported in the Dominican Republic, Jamaica, Puerto Rico, and the U.S. Virgin Islands. Four deaths in those regions were blamed on the storm system. 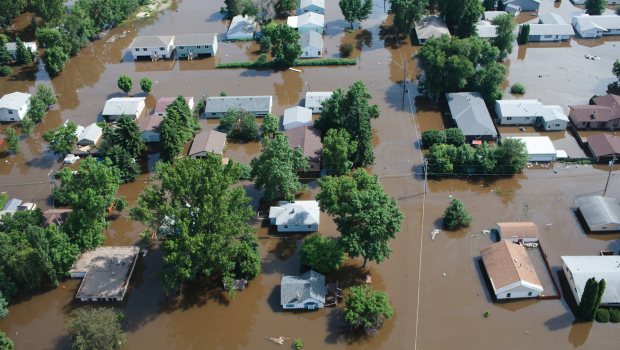 On June 25th, the Souris River above Minot, North Dakota surged past its previous high level in 1881 by nearly four feet, due to a combination of heavy snowpack melt and rains. On the 26th the river flowed at 27,600 cubic feet (782 cubic meters) per second, five times the fastest rate in the past 30 years. About 12,000 people were evacuated. The city filled with an average of seven feet of water and more than 4000 homes and hundreds of local businesses were flooded Other areas were affected as well. Ten of the eleven gauges along the Sauris were at record high levels on the 26th and the nearby towns of Sawyer and Velva had been evacuated. 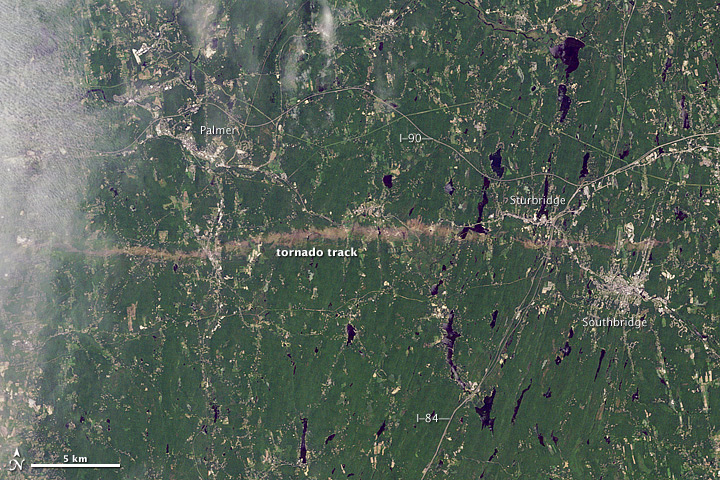 Three tornadoes ripped through several communities in western and central Massachusetts on June 1st, killing three people and injuring 72 others. One of the tornadoes, which carved a 39-mile (63-km) path from Hampden to Worcester, was classified by NOAA's National Weather Service as an EF-3, which are uncommon in the northeastern United States. This path length was the second longest in the state's history, behind the Worcester Tornado [40-mile (64-km) path length] that struck on June 9th, 1953. Three people were killed and damages were estimated to be $175 million (U.S. dollars), making this the costliest natuaral disaster in the state's recent history, according to officials. With the three fatalities, the total year-to-date tornado-related death toll for the United States rose to 537, making 2011 the deadliest year for tornadoes since records began in 1950. 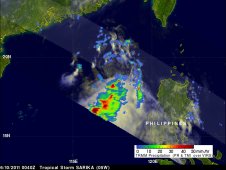 Tropical Strom Sarika brought heavy rains and flooding to the Philippines on June 10th, killing at leat six people and leaving 11 missing. The storm then continued on its northwesterly track, striking the southern Chinese province of Guangdong on June 11th, with maixmum sustained winds of 45 mph (72 km/hr). At least 23 people were killed in Xianning (central Hubei province) as flooding and landslides wreaked havoc on the area. Sarika was the first tropical strom to make landfall in China this year. 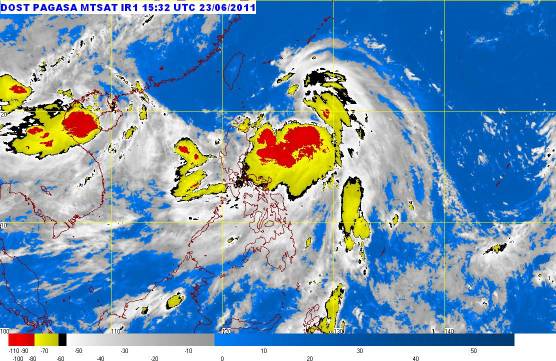 Tropical Storm Meari (also referred to as Falcon) left dozens of people dead as it impacted several countries in East Asia. The storm formed east of the Philippines on June 20th and the Philippine Atmospheric, Geophysical, and Astronomical Services Administration (PAGASA) named the storm 'Falcon' that evening. The storm was upgraded to tropical storm strength on the 22nd and the Japan Meteorological Agency named the cyclone 'Meari'. The storm reached maximum intensity of 70 mph (110 km/hr). At least eight fatalities were reported in the Philippines , where an estimated 1.7 million people across 12 provinces were affected. Media reports stated that at least nine people were killed in South Korea and 17 people were killed in northern Vietnam due to lightning strikes and flooding from the storm. Meari made landfall in southwestern North Korea near the city of Pyongyang on the 27th; however, no information about possible deaths or damages was publicly available. The storm disippated that same day as it moved over land. 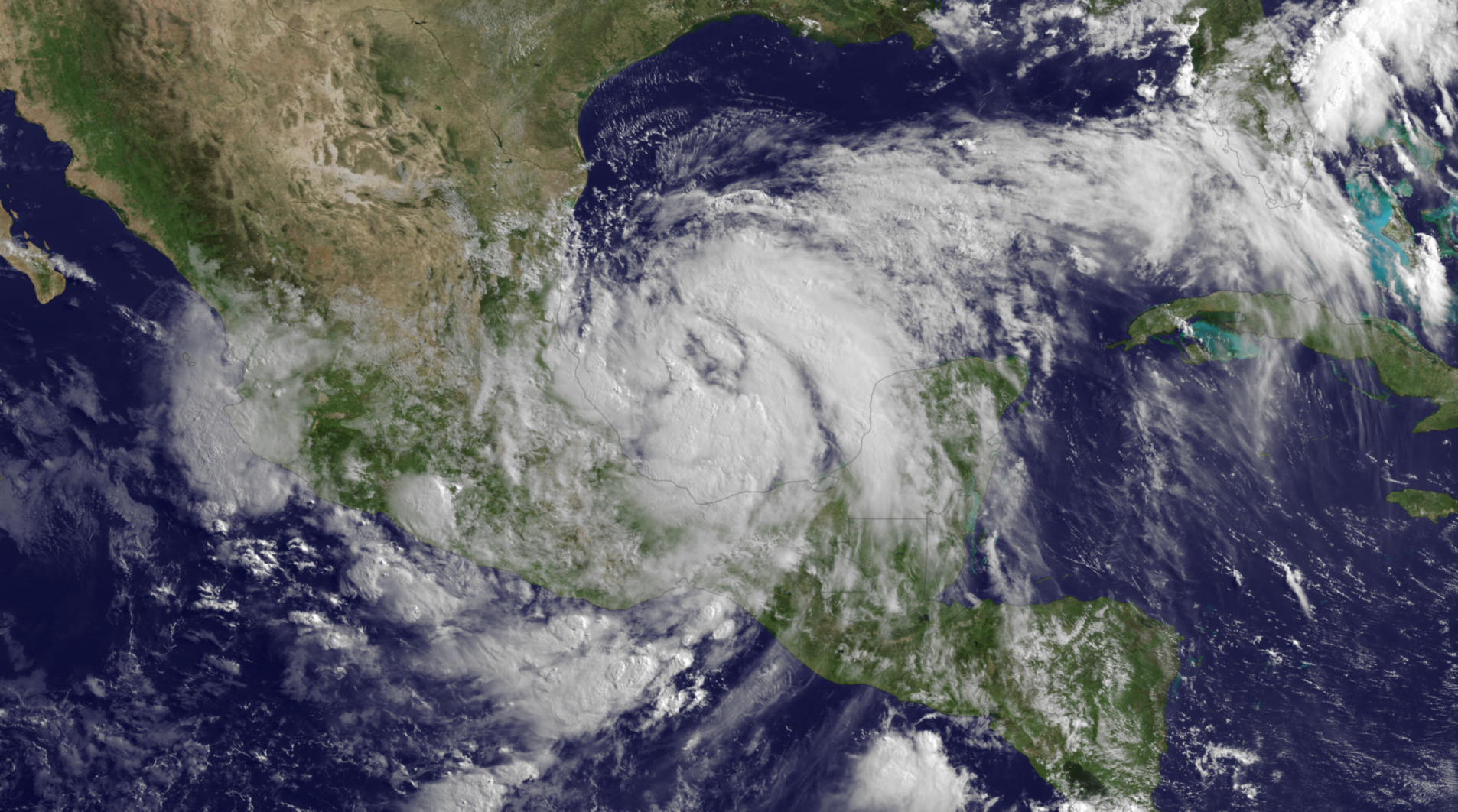 The first tropical cyclone of the North Atlantic hurricane season—Tropical Storm Arlene—made landfall over Mexico's central Gulf Coast near Cabo Rojo on June 30th. The storm had maximum sustained winds of 65 mph (104 km/hr) and brought heavy rains and flooding to some drought-stricken areas. According to a media report, the state of Tamaulipas in northern Mexico had been suffering from its worst drought in 50 years prior to the storm event. The Mexican government attributed 22 deaths across several states to Arlene.